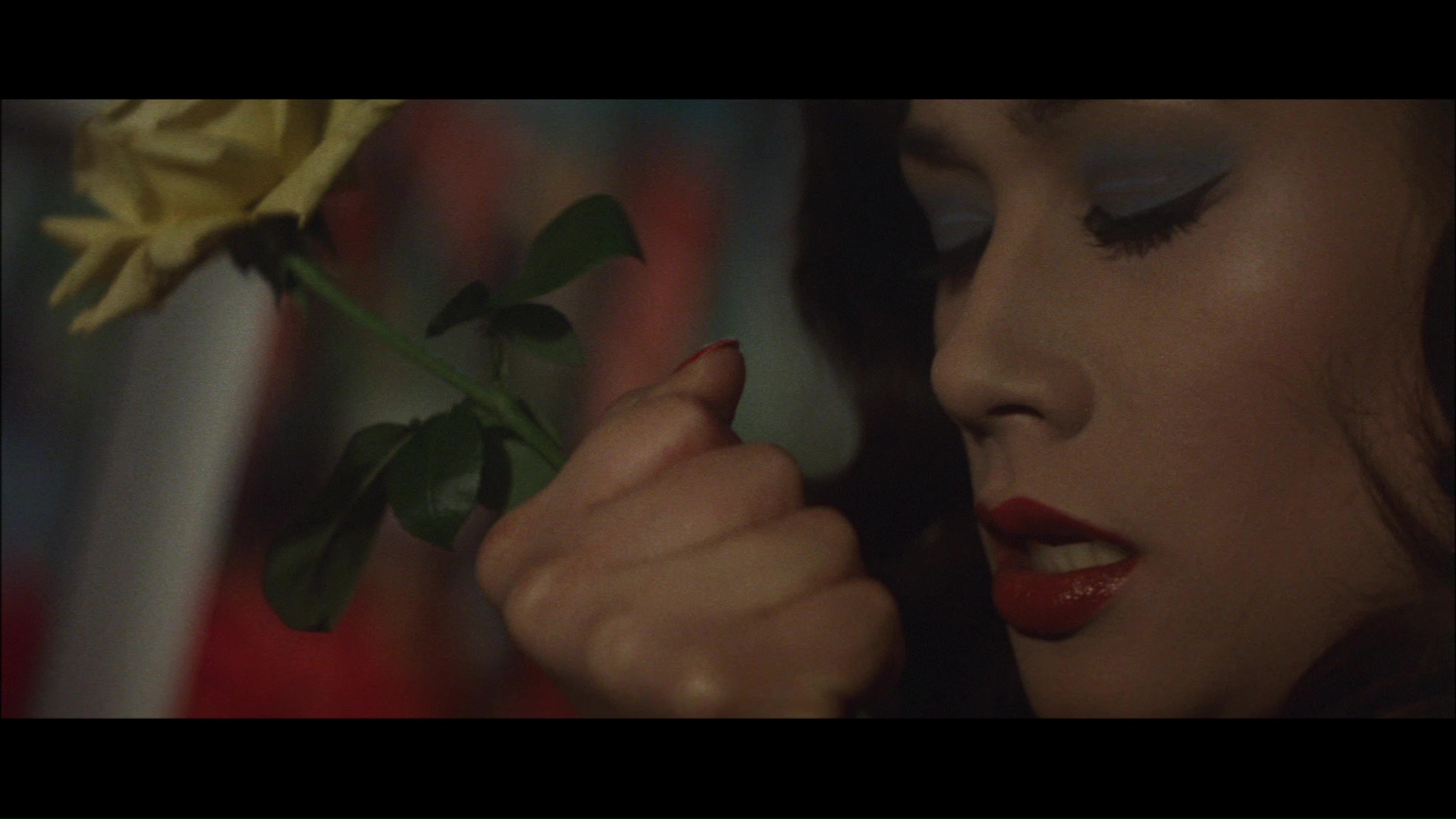 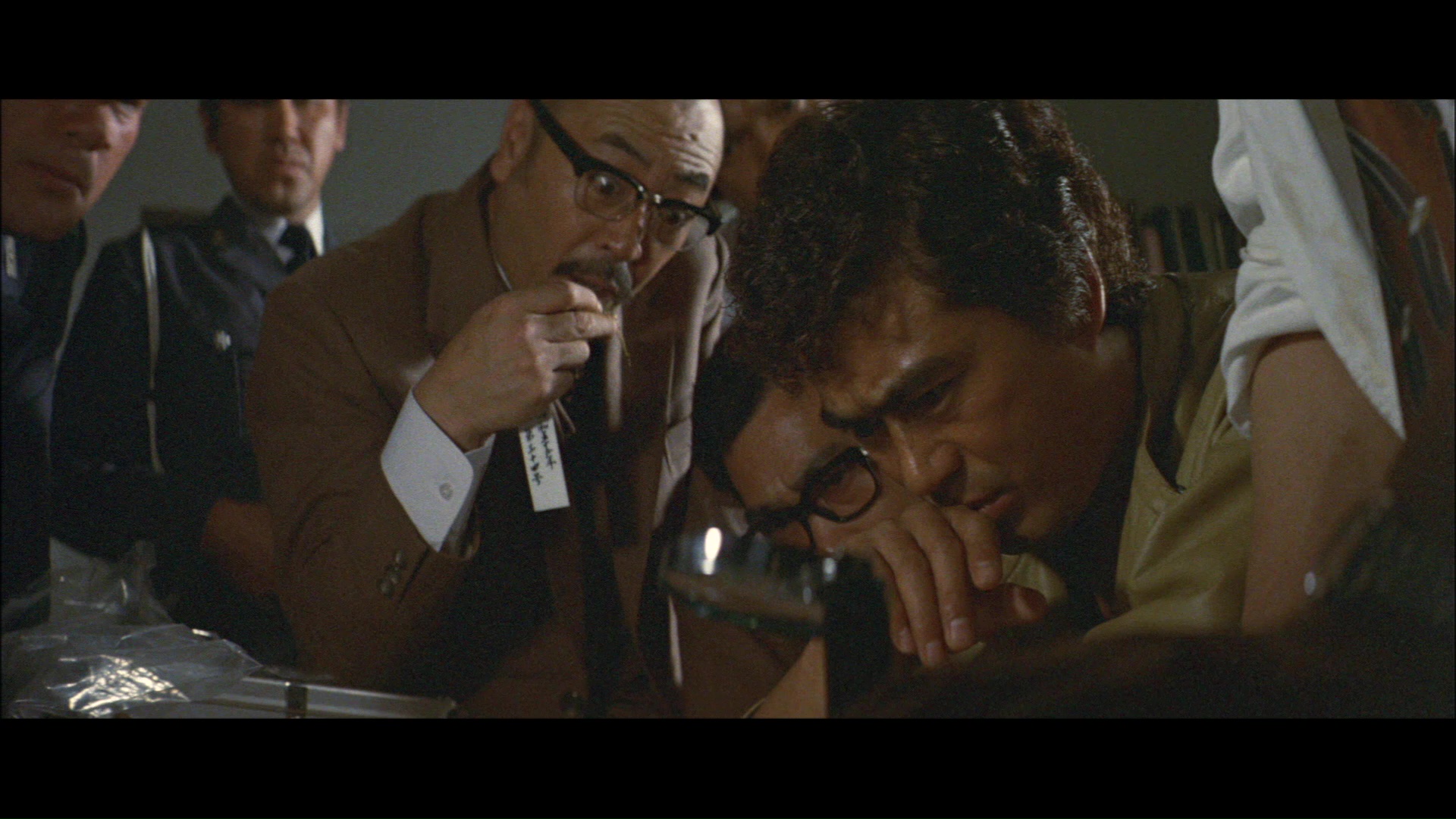 The long-running partnership between director Kenji Fukasaku and star Sonny Chiba had been going strong since the early '60s and had already produced some noteworthy films like Hiroshima Death Match when they joined forces in 1977 for this very loose adaptation of a gekiga (or, roughly, more prestigious, plot-based manga) by Fist of the North Star's Buronson. How loose is it? There's no doberman in sight, but you do get a pet pig.

Said farm animal is the traveling companion of Joji Kano (Chiba), a down-home Okinawa cop tracking down a girl named Yuna, his old next-door neighbor, who went missing five years ago in Tokyo. He arrives in the big city and immediately lands in a volatile world of violence and debauchery, with all clues including x-rays indicating the girl was burned to a crisp in a case of arson. Since he's in town already and doesn't seem all that threatening with his omnipresent straw hat, he gets pulled into some nasty business involving a pretty singer, Miki (Hatta), who's now under the thumb of ruthless mobster Hidenori (Matsukata). Along the way he wins over the cops during a hostage crisis (though they aren't all that enamored of taking his pig as a present from his mother), which leads to the inevitable climactic showdown.

The plot's all well and good here, but it's mostly a framework for a string of action and comedy set pieces including several fights, some jaw-dropping real Chiba stunts no American star would ever tackle, and a show-stopping sequence in which our hero goes to a strip bar where none other than 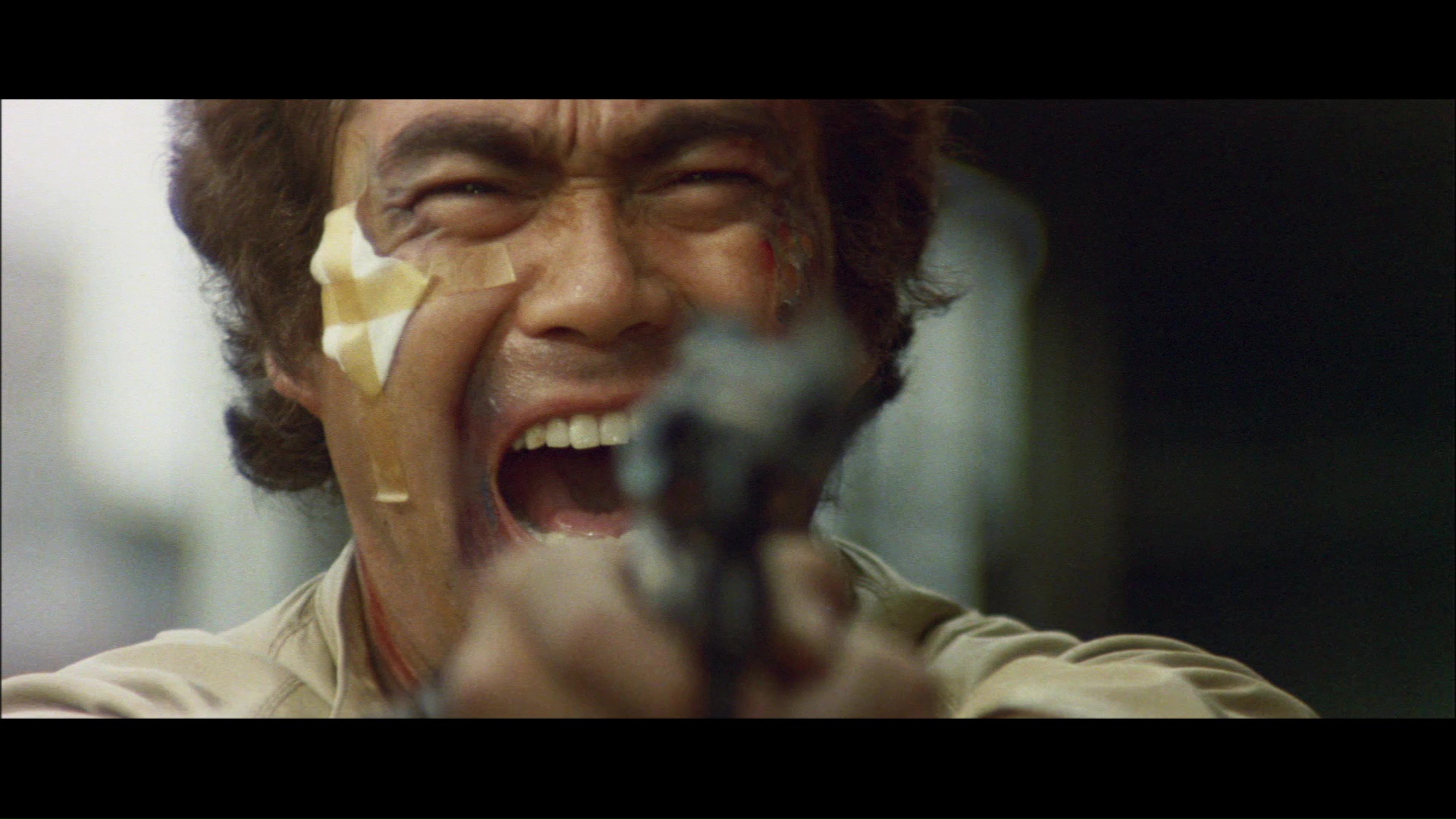 In the Realm of the Senses star 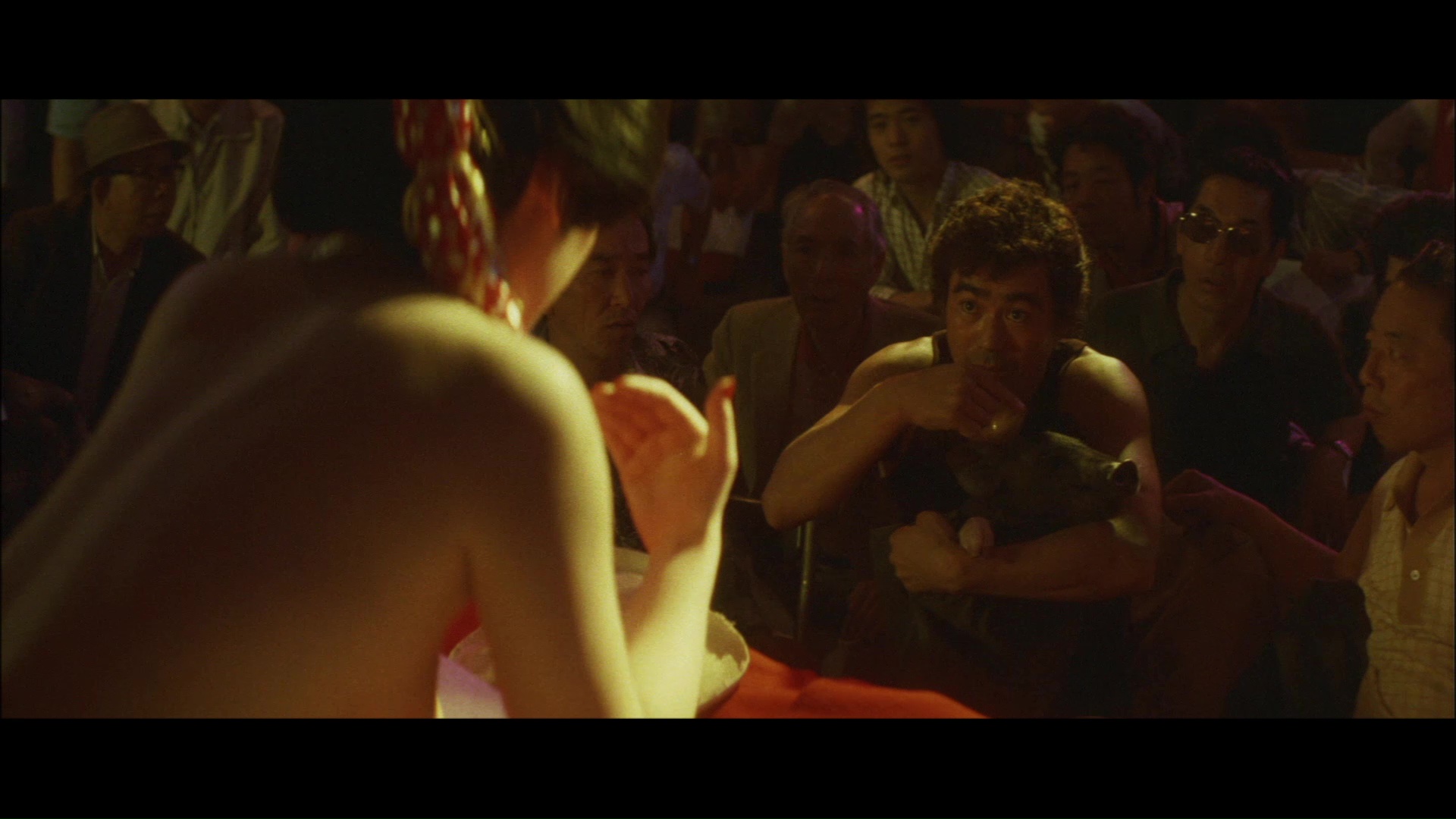 Eiko Matsuda forces him to do a live rowdy sex show after bringing his pig on stage. The Fukasaku-Chiba collaborations are always unpredictable, and this is no exception as a pretty wild number that they followed soon afterwards with Shogun's Samurai and the very different and far more crazed Message from Space (not to mention Legend of Eight Samurai, Fall Guy, Day of Resurrection, and plenty more). Here Fukasaku indulges in a wide variety of pop and funk music which, coupled with his gleeful use of star filters in several scenes, makes this feel like a '70s variety show gone wildly off the rails. Chiba's a good sport as always, using his hulking athleticism to good effect and showing off his comic skills in some nice bits like a cute scene with a shady Coke vendor.

Never officially released on home video outside of Japan for decades after its release, Doberman Cop makes its American and British debut on Blu-ray and DVD from Arrow Video with one of the stronger transfers from its ongoing Japanese line. The Toei-supplied HD transfer looks clean and colorful, with better black levels than some of the studio's other masters. Fans of the star or director should be very happy with the way it looks here, and the LPCM Japanese 2.0 mono track with 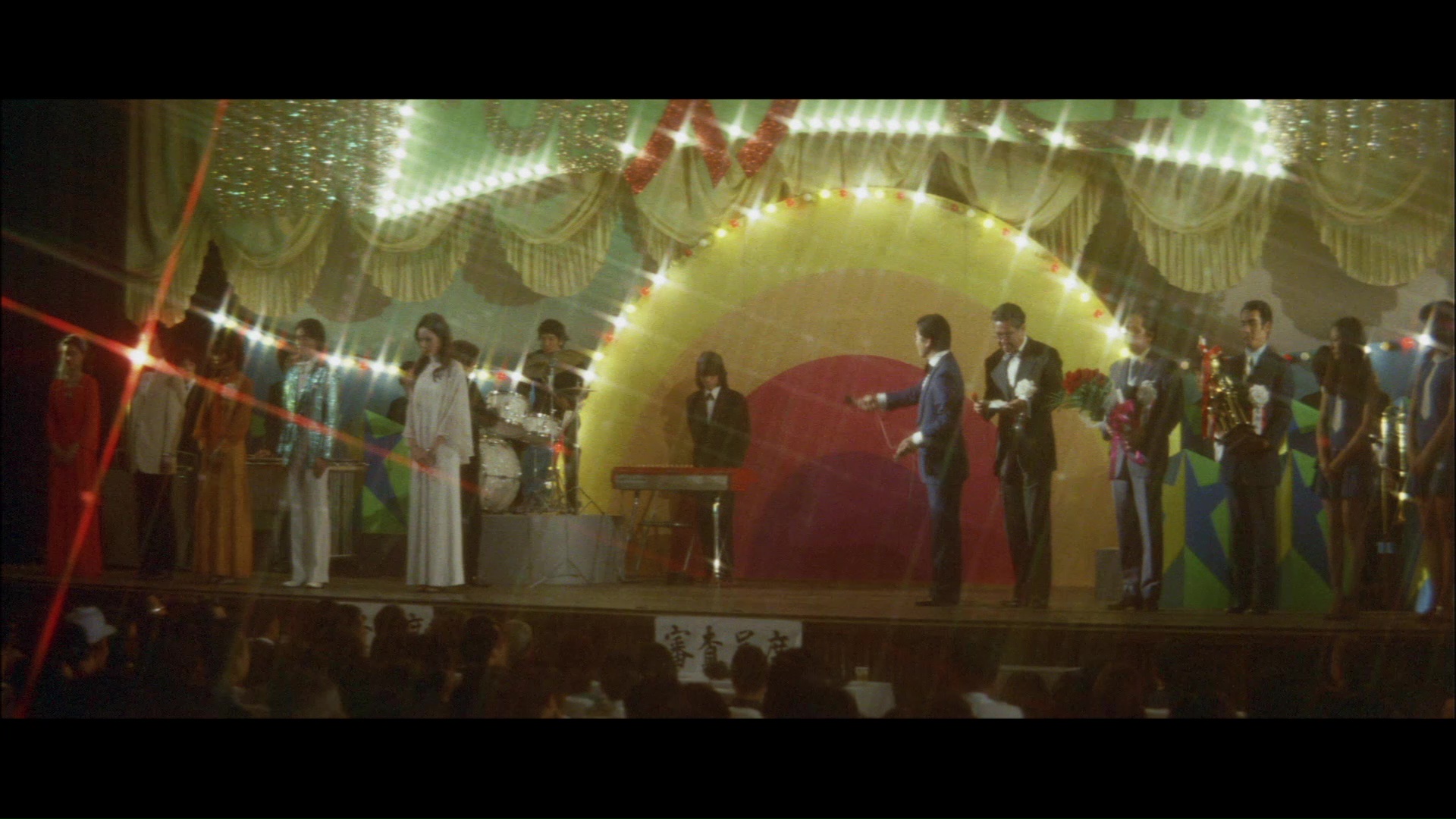 optional English subtitles is also very satisfying. In addition to the original Japanese trailer, the release features three new featurettes, all excellent and 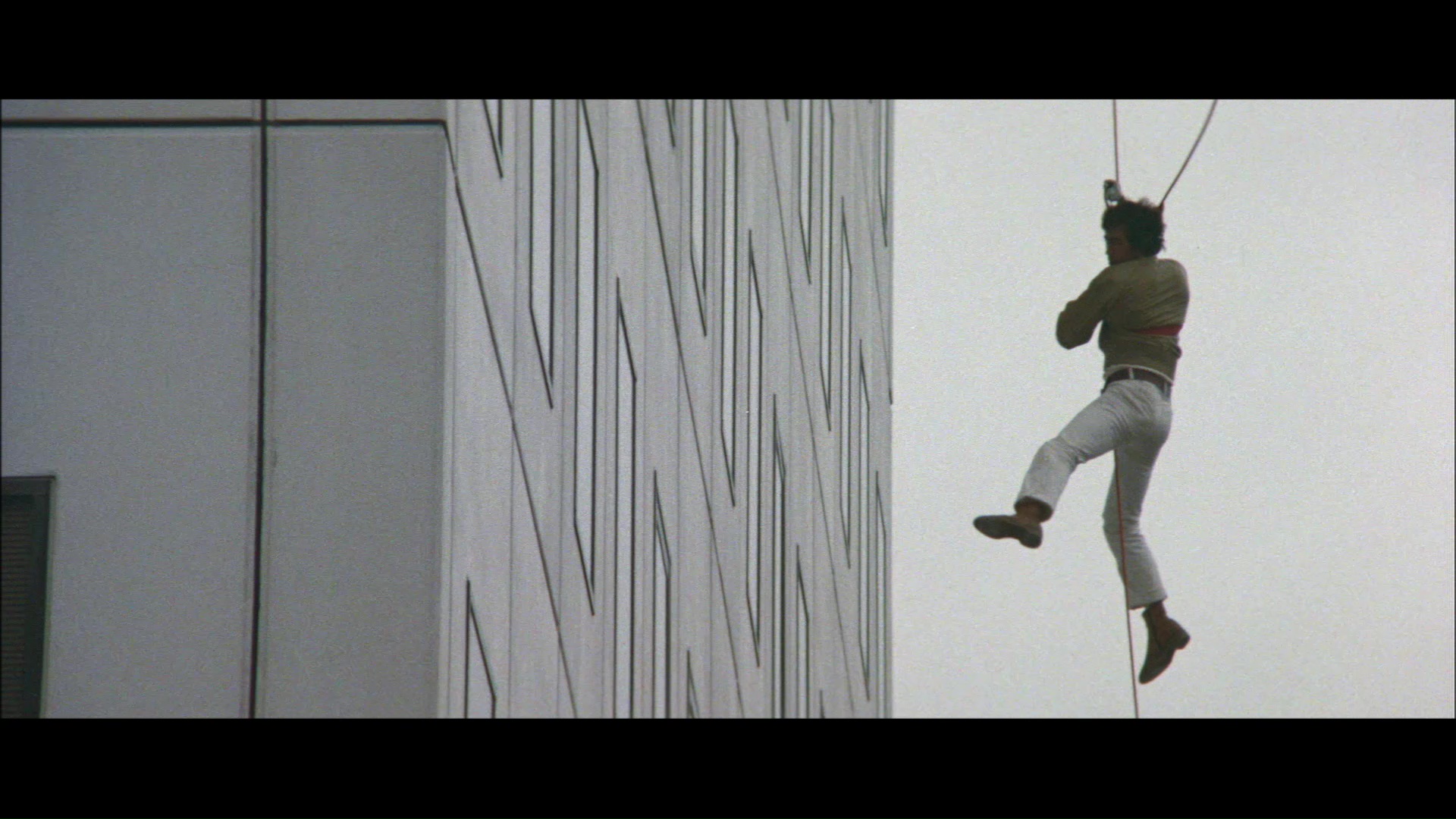 worth checking out after you see the film. "Beyond the Film: Doberman Cop" (8m54s) with Fukasaku biographer Sadao Yamane sets the stage for the director's '70s work following the incomparable Battles without Honor and Humanity and explores the gekiga source material, the film's failure to draw a big audience (and thus no sequels), and the "end of an era" the film represents. Screenwriter Koji Takada turns up next for "Cops, Pigs and Karate" (17m55s), talking about how the adaptation process at the time allowed for greater leeway using novels and manga as raw material, the casting of various actors including Matsuda, the hostile reaction to his script, and the challenges of casting pigs who grow very quickly. Finally in "A Life in Action, Vol. 2" (17m53s), a continuation of the interview started on Arrow's Wolf Guy, Chiba goes in depth on his on-and-off work with Fukasaku over the years from their very early days through a frenzy of projects into the '80s and beyond with the man he regarded as a "big brother" with an always relaxed set. Incredibly, it also sounds like the most dangerous part of the film was the motorcycle scenes, which required some stunt professionals to be brought in! Definitely a treat for Chiba fans. As usual you get reversible cover options (the original Japanese art or a new design by Chris Malbon), plus a liner notes booklet in the first pressing with an essay by Patrick Macia.