The last film from surrealist master Luis Buñuel offers his own eccentric take on frustrated love and passion: 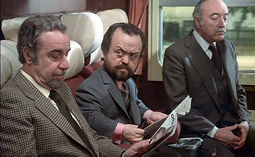 Cet obscur objet du désir (That Obscure Object of Desire). Most obviously that object would seem to be Conchita, played randomly by two different actresses, Carole Bouquet and Angela Molina. On the other side of the coin is the eternally frustrated Mathieu (Fernando Rey), a bachelor well past his prime who finds himself relentlessly confounded by this beauty. First seen boarding a train only to excuse 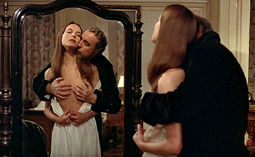 himself in order to dump a pail of water on Conchita's head at the station, he then settles down to tell his fellow passengers (including a little girl and a midget professor of psychology) about the circumstances leading to such extreme behavior. His story begins when he first meets Conchita, a maid living under great financial strain with her mother. At first she seems receptive to his charms, but despite his increasing romantic feelings, she refuses to sleep with him. Meanwhile the city continuously erupts in explosions from senseless terrorist attacks, a seeming parallel to the romantic events which continually keep these two sexes at war. From one scene to the next, Conchita's personality changes: a cunning vixen one moment, a doe eyed innocent the next. Which one, if either, is the real woman... and can Mathieu ever come to terms with her slippery personality?

As with many of Buñuel's other films, Obscure Object relies heavily on a narrative told by someone completely unreliable - a self-confessed chauvanist who admits to slapping Conchita so hard she bleeds. The reasons for this action, of course, are the real subject in question here, and no doubt a film from her point of view would be radically different. The opening scene alone casts serious doubt in the viewer's mind, as Mathieu orders a butler to destory various objects in a room related to Conchita and casually dismisses the man's alarm at seeing a splash of blood on a pillow. The ambiguity is carried even further in aural terms; Rey's voice was dubbed (for health reasons?) by Michel Piccoli (who appeared with Rey in other Buñuel projects), while both actresses were dubbed by a single other vocal performer. The layering here is more subtle than the onion-skin structure of The Discreet Charm of the 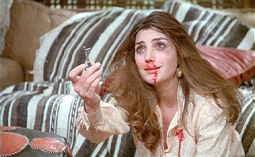 Bourgeoisie, but the straightforward plotline is simply another trick at Buñuel's disposal to confound viewer expectations. The justifiably famous ending, a perfect closer for the master's film career, both resolves everything and still leaves the issues tumbling in the air, capping off his filmography both with nods to his other films (the mysterious bag here echoing the buzzing box in Belle de Jour) and a new reservoir of imagination to fuel one final, puckish study of the ultimately unknowable human heart.

That Obscure Object of Desire has always looked quite good on home video, dating back to the days of its VHS premiere from Samuel Goldwyn and an early laserdisc from Criterion. This refurbished print from Rialto therefore looks great, but the differences are minor. Colors are bit more pronounced and less ruddy than the laser, and some minor element damage around the reel changes is now thankfully absent. The blocky, bright red opening titles are still a bit more than NTSC resolution can comfortably handle, however. The optional subtitles are 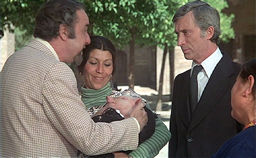 also larger and easier to follow than the earlier translation, and those interested in the director's visual techniques can now finally turn them off. Buñuel fanatics will also appreciate the disc's history of the source novel, Pierre Louÿs' La femme et le pantin, represented here by snippets of the silent 1928 film adaptation by Jacques de Baroncelli. Obviously an influence on its '77 remake, this adaptation looks remarkably similar in certain shots and even includes some daring (but tasteful) frontal nudity during Conchita's dance which Buñuel was only too happy to replicate in his version. Incidentally, the novel was also adapted by Josef von Sternberg in 1935 for the Marlene Dietrich vehicle, The Devil Is a Woman. Other extras include the lively U.S. theatrical trailer and a printed booklet containing liner notes by The Murderous Gaze's William Rothman and an informative interview with Buñuel by journalists Jose de la Colina and Tomas Perez Turrent. Apart from debunking some of the critical myths surrounding the film, the interview also offers a nice portrait of the great director enjoying his autumn years in high style.

As he comfortably settled into middle age, Buñuel found himself moving defty from one cinematic phase to another, slipping his anarchic surrealist touches into stories the general public could accept and enjoy. Though not as overtly scandalous as such classics as Belle de Jour, Diary of a Chambermaid finds the master at the peak of his powers, ripping apart bourgeois conventions with unexpected humor and bizarre imagery.

At a provincial high society home in 1930s France, wide-eyed domestic Celestine (French New Wave icon Jeanne Moreau) arrives to serve for the seemingly normal Monteil family. Naturally things are not even remotely what they seem, as each man from the foot fetishist aging patriarch to the gun-toting husband (Michel Piccoli), whose frigid wife (Francoise Lugagne) is Celestine's only real challenge. The estate is rocked when a young girl is found raped and murdered in the woods, and persecuted, fascist handyman, Joseph (Georges Geret), is accused of the crime. Celestine does a little private investigation to uncover the truth... though in typical Buñuel fashion, her motives may not be all that they seem.

One of the most formally beautiful films in the director's canon, Diary of a Chambermaid feels on the surface more like a comedy of manners a la Jean Renoir. However, those odd little touches clearly betray the hand of the real author: ace hunter Piccoli blasting a butterfly off a flower, Moreau letting one of her admirer's rhapsodize over her black leather boots, and the brief but chilling image of the young murder victim, her bloodstained legs adorned with snails. Moreau is wonderful as usual, displaying a wicked blend of sensuality and wry humor

which nicely counterbalances Piccoli's trademark blend of urbane perversity. Buñuel didn't shoot many of his films in scope, but he proves quite adept with the horizontal framing here, making one wonder what he could have accomplished had he pursued the format any further.

Criterion's DVD of Diary of a Chambermaid is even more of a stunner than their already superlative job on The Discreet Charm of the Bourgeoisie. The restored source material is immaculate and almost three dimenstional in its clarity, with nary a scratch, scuff, or compression flaw to be seen. Past VHS releases both pan and scan and letterboxed look simply anemic in comparison. The disc also includes a fetching French trailer in which a noncommital Moreau is interviewed over clips from the film; other bonuses include a nostalgic video interview with Jean-Claude Carriere (who wrote many of the director's French projects) and a printed 1970s interview with Buñuel in which he discusses this film in typically elusive fashion.

Most of the world's great filmmakers seem to mellow with age, but fortunately the best simply improve like a fine wine. Take for example the master surrealist Luis Buñuel, who continued to 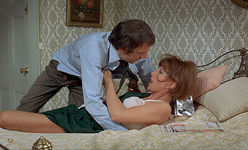 produce masterpieces through the age of 77 and even garnered an Academy Award for Best Foreign Film in 1972 with The Discreet Charm of the Bourgeoisie, a slippery and often hilarious black comedy which offers a teasing flipside to his earlier "dinner guests trapped in a house" classic, The Exterminating Angel. As with all Buñuel films, this may not be to everyone's taste, but those who are game will find it quite a delectable dish.

In the early evening, a group of wealthy guests arrive at the home of Alice (Stephane Audran, Claude Chabrol's muse), who is startled to find them ready to eat dinner. Her husband is away, she claims, and she thought the dinner was scheduled for the following night. Reactions range wildly: bemused indifference from the optimistic Madame Thevenot (Daughters of Darkness' Delphine Seyrig), pragmatic determination from drug dealing diplomat Don Rafael (Fernando Rey), and snotty irritation from the petulant Florence (Bulle Ogier). Everyone clambers outside to a nearby restaurant, where they are seated next to a cloistered room lit with candles.

An alarmed Alice discovers that the restaurant owner's dead body has been laid out next to their table with the waitstaff and kitchen help are waiting for the undertaker. Needless to say, no one eats. During a luncheon appointment, the bourgeoisie's plans are interrupted again when hostess Alice's adulterous urges send her scurrying off for some love in the bushes; another incident at a restaurant is interrupted when a young solider sits down to relate a bizarre, gruesome, and darkly humorous ghost story involving his childhood; and the diplomat's dinner is interrupted by terrorists, government officials, and other minor distractions. Interlocking stories pile upon each other until the line between reality, dreams, and fantasies becomes indistinguishable... but as always, appetites for food, sex, and emotional satisfaction remain constantly, comically thwarted.

While the director's surrealist roots are quite in evidence, including the repeated supernatural elements and bizarre injections of gunplay and sexual tomfoolery, his outlook on humanity had obviously become more benevolent over the years. As mirrored in the recurring image of the protagonists walking down a country road, his flawed characters persist in their own private missions and refuse to give up despite the bizarre curveballs life has in store for them. Add to that a dream cast of European professionals, led by the always magnificent Fernando Rey (also in Buñuel's Tristana and That Obscure Object of Desire), and you have a wonderfully strang piece of world class cinema whose message can adapt perfectly from one generation to another without losing any of its resonance. Likewise, the wry humor has lost none of its potency; for instance, the recurring 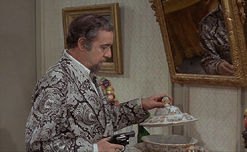 gag of a priest who enjoys dressing up as a gardener can still induce uncontrollable giggling on repeated viewings.

Criterion's two disc set of The Discreet Charm of the Bourgeoisie marks the long overdue debut of Buñuel on American DVD (where's Belle de Jour, Miramax?), and fortunately they have done this classic justice in every respect. While the film's age is evident during the grainy, hazy opening credits, the rest of the presentation is absolutely pristine in every respect, almost three dimensional in its razor sharp clarity and beautifully rendered colors. The previous laserdisc from Orion was a dull, cropped atrocity, while mildly letterboxed

(1.60:1) prints aired briefly on the Independent Film Channel. The Criterion version bests them all by a wide margin, and the framing looks ideally suited for Buñuel's elegantly composed set pieces. The optional, yellow English subtitles are also a tremendous improvement and more accurately reflect the rapid fire puns and bon mots dropped by the characters as they bound from one table to another.

The first disc also contains the original French theatrical trailer with optional subtitles along with a 25 minute documentary, El Naufrago De La Calle De La Providencia (or The Survivor on the Street of Providence), a 1970 homemade film by his friends Arturo Ripstein and Rafael Castanedo. Essentially a loving portrayal of the master at home, this treat focuses on his love of mixing martinis(!) and his obvious affection for his fellow man despite the oppressive institutions of politics and organized religion. (And yes, you get the martini mix recipe, too.) Disc two contains a recent 98 minute documentary, Regarding Buñuel, which was apparently produced for European television. Virtually everything you could possibly want to know about the director is contained somewhere in here, from his birth to his career highlights and all of the troubles in between, including his flight from Spain. Various friends, family connections, and actors (including Michel Piccoli and Angela Molina) offer their own insights into the legendary filmmaker, who had a knack for delivering perfect, unbelievable jokes with a deadly serious poker face. How very appropriate.