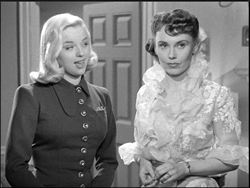 Publicized to post-WWII audiences as Britain's blonde bombshell counterpart to Marilyn Monroe, the buxom and talented Diana Dors became a significant box office draw with a number of credible titles under her belt, most notably the beloved A Kid for Two Farthings and David Lean's Oliver Twist. Unlike many actresses who go off to pasture when middle age strikes, she remained popular enough to continue her career in an even more interesting direction in the '60s and '70s, racking up a string of cult roles as diverse as Berserk, Hammerhead, Deep End, Jacques Demy's The Pied Piper, Theater of Blood, From Beyond the Grave, Craze, and even a string of cheeky softcore sex comedies like Adventures of a Taxi Driver, The Amorous Milkman, and most surprisingly, Joe Sarno's Swedish Wildcats. Her untimely death in 1984 robbed Britain of one of its most indelible female stars, a charismatic and striking woman with a roster of credits like no one else. The BFI's double feature tribute to Dors collects two frothy comedies she made in the early '50s for director 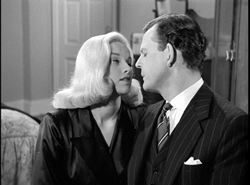 Maurice Elvey, an inconsistent but sometimes brilliant helmer (as in Hindle Wakes) who'd been around since the silent era. Her presence elevates both well above the level of your standard mistaken identity shenanigans, and fans of vintage British comedy will be tickled pink by the spectacular presentations found here.

Based on a stage play by Vivian Tidmarsh, Is Your Honeymoon Really Necessary sticks close to its theatrical roots by keeping almost everything indoors with medium shots following the comedic misadventures of American military pilot Laurie Vining (Colleano) and his wide-eyed new bride, Gillian (Lolita's Decker), at a posh English luxury resort. Unfortunately the airman's previous wife, the hourglass-shaped Candy (Dors), pops up to complicate things by claiming they were never officially divorced, and a mad series of complications and deceptions ensues which entangle a timid, romantically clumsy lawyer (Mary Poppins's Tomlinson) and one of Vining's fellow pilots (James). And exactly how long can Gillian remain in the dark about her husband's complicated marital history which involves her new best female friend on their little getaway? Though the plot's basically another trot through territory mined in screwball comedies like My Favorite Wife and Too Many Husbands (not to mention countless door-slamming British stage farces), this particular offering stands out thanks mainly to the effervescent Dors (showing off an odd but endearing accent and first seen doing a spicy bubble bath ad) and Tomlinson, both of whom never fail to pull off even the silliest and most unlikely plot twists with their professionalism and charm. Their "American" counterparts come off a little bland and seem present mainly to justify some "quaint" 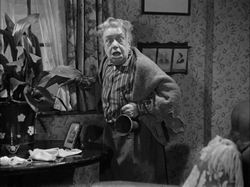 English scenery at the beginning. All in all it's short, sweet, and thoroughly entertaining.

The co-feature, My Wife's Lodger, was released one year earlier and also involves servicemen coping with comic misadventure back home as Willie Higginbottom (Roche, a stage actor in his first film role) comes home from combat only to find his entire life turned upside down. His wife Maggie (Sloane) is being swiped by the interloping "Roger the Lodger" 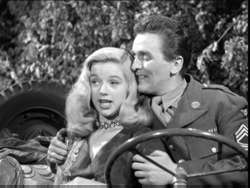 (Dwyer) now living under their roof, and his daughter Eunice (Dors) is growing up in very distressing ways. Much broader and sometimes akin to a music hall routine right from the boisterous theme song, this hasn't aged quite as well as the first film but does have a few notable chuckles and a surprising undercurrent of male frustration and panic churning through the entire storyline.

The BFI's impressive track record continues with this dual-format release, featuring the DVD on one side and the Blu-Ray on the other, both region free. The Blu-Ray's really the way to go as the black and white transfer easily rivals the best the format has to offer; these film both look staggering and could have been fresh from the lab, easily ranking with the best monochromatic transfers available from Warner or Criterion. It's hard to imagine how two comedy programmers from the '50s could possibly look so good, and classic movie fans will find enough demo material here to keep their eyes happy for hours. Both films feature optional English subtitles and no extras, but the disc comes with a substantial 30-page booklet containing poster art, publicity shots, a remembrance of Dors by her son Jason Lake, a few notes about David Tomlinson by his widow Audrey, and an essay about Dors by her biographer, Damon Wise. Incidentally, this release is one of the BFI's welcome additions to the rarely-seen library of Adelphi Films, a British production company from the '40s and '50s who churned out numerous programmers in every commercial genre and whose negative materials have, according to the press notes, been stashed aside in a garage for years before being rescued for preservation. Judging by the eye-popping quality on display here, English garages are apparently much better cinematic safehouses than most studio vaults.