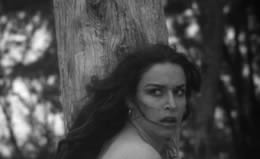 lost since the mid-1970s, this sordid slice of south-of-the-border mayhem marked the fifth directorial effort for Florida-based director William Grefé, the enterprising drive-in favorite behind such films as Stanley, Death Curse of Tartu, The Hooked Generation, and everyone's favorite jellyfish-man monster movie, Sting of Death. This one's certainly stronger than his usual fare, released in 1966 in various 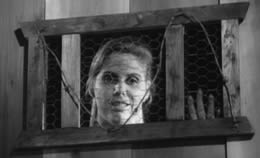 territories around the world and then reissued as Sisters of the Devil two years later (by K. Gordon Murray!) with the obvious poster tagline, "If you prayed for Rosemary's Baby, pray for me!"

Despite the title, there are really no satanic or ooga-booga occult elements anywhere in sight. Instead this ostensibly fact-based story was inspired by the antics of two Mexico City women who abducted, tortured, sold off, and sometimes killed young women in the area, leading to a notorious local court case. Here the events are depicted through the eyes of Teresa (Saxon), a beaten-up prostitute admitted to a local hospital. The staff urges the police to stay and listen to her story, though her former boyfriend (Pinero), one of the cops, isn't all that eager to listen. Finally in flashbacks they hear her incredible tale, which began when the virginal Teresa fended off her boyfriend's advances during an afternoon make out session in the woods and decided to take off to find a job in Tijuana. Unfortunately she winds up in the clutches of chubby, stogie-smoking slaver Rita (Crystal) and her hirsute henchman, José (Marquez), who spies on Teresa taking a bath, Psycho-style, and then assaults her in her bedroom. When they find out about her cop boyfriend, Rita decides to ship Teresa out to a degenerate farmhouse run by Marta (Rodesky), a sadist who oversees an imprisoned stable of fallen women. Teresa's fellow prisoners warn her about the various punishments inflicted on them including "the royal wedding bed," a fate worse than death. Of course, it isn't long before disobedient girls are being disciplined with tactics involving torture, gasoline, and forced grave digging, a 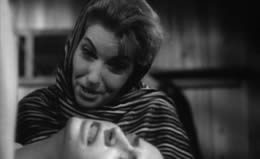 nd Teresa herself soon gets a taste of the wedding bed itself, which involves a big wooden table and the nasty use of a big roll of barbed wire. We already know she gets out alive, but at what cost?

Shot for little money with Florida standing in (sometimes pretty successfully) for Mexico, this is quite a find for fans of '60s roughies as it tosses in p 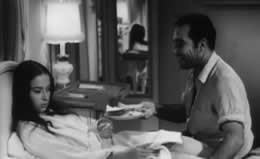 lenty of teasing cheesecake near nudity, excessive punishment scenes clearly inspired by the recent success of the B&W Olga series, and sweaty Mexican atmosphere straight out of Touch of Evil. None of the performances are particularly good (with Saxon putting on an awkward accent straight out of the Natalie Wood/West Side Story school), but it hardly matters with Grefé tossing so many exploitation elements at the screen. It's also fun to pick out how similar this film is to some far more famous later European horror efforts in the following decade, most notably A Candle for the Devil and House of Whipcord.

Despite its fairly substantial theatrical release, this film completely vanished from circulation well before the home video era and was gone without a trace when Grefé went to buy it back and round up any circulating film prints. Eventually one was located in Germany, though it was missing the last eight minutes. That sole surviving element is the source used for this DVD produced by Ballyhoo Motion Pictures, the gang responsible for the copious extras on Synapse's Hammer Films releases. They get around the problem of the missing ending (which cuts out during the middle of a climactic foot chase) by cutting to Grefé himself popping up on the screen to explain the story resolution, complete with new hand-drawn ink storyboards to illustrate the action. It's a shame the final moments (a grim bit of retribution) are apparently gone for good, but at least you can easily follow the action and learn how it all originally wrapped up.

First sold directly through Grefé's Reality's Edge Films site and now available through Amazon, the manufactured-on-demand title (DVD-R) looks quite good with a healthy 1.66:1 anamorphic transfer is pretty fine shape. The director is on hand to provide a video intro, an audio commentary, and "Devil's Sisters: Revisited," a nine-minute featurette. He covers pretty much anything you could possibly want to know about the film including the factual basis, the nightmares of hauling around a 200-lb. camera and getting clean sound, the sometimes muddy travails experienced by the actors, the dangers of firing real bullets during production, and his dissatisfaction with the minimalist Mexican-flavored music. You also get a 12-second radio spot, a gallery of stills and posters, bonus Grefé trailers for Death Curse of Tartu and Sting of Death, and an excellent essay by Temple of Schlock's Chris Poggiali outlining some notable flourishes in the film as well as a welcome outline of its release history and eventual resurrection. Pretty wild stuff, and proof positive for fans of golden age exploitation cinema that there's always another undiscovered gem out there waiting to be rediscovered.