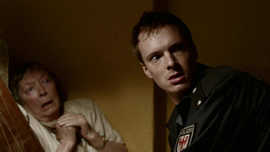 This marvelous German horror film charts one life-changing night in the life of Jakob (Diercks), a young police officer in a 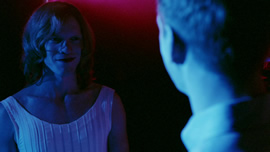 town on the outskirts of Berlin where all the residents seem to know each other. He feels like an outcast among his former classmates and spends his after hours time at home with his grandmother (Hanke-Haensch) working on a model of the village. However, the sighting of a wolf intruding in the area leads Jakob to the abandoned house next door where he finds the titular nameless character (Diercks), a man in a white dress brandishing a samurai sword. The samurai disturbs Jakob's sense of control and starts to goad him into transgressive behavior, apparently privy to some of the young man's deepest thoughts and willing to upset his entire life. Whether paying a visit to the dementia-riddled grandmother that results in fiery chaos or facing off against the other young men in the village, the samurai turns out to be a formidable and very unpredictable adversary with his owns in mind for Jakob.

Made for a very low budget with a combination of state funding and crowd funding, Der Samurai features a highly unique atmosphere and a wonderfully perverse sense of humor as it repeatedly pits the two main characters against each other. Bukowski in particular offers a truly fearless and unforgettable 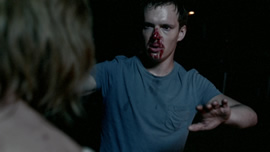 performance, not too far removed from what a young Klaus Kinski might have done with the role but going to some brave extremes even that famous madman might not have attempted. Structurally the film has a handful of echoes of The Hitcher (a film cited by the filmmakers as an inspiration), particularly in the final ten minutes, but it's a different beast entirely as it dives into more overt sado-erotic territory than the undercurrents of that '80s cult favorite. It's also beautifully shot, so much so that it's hard to believe this is director Till Kleinert's first feature; the use of color in particular is striking with the dark green of the town offset with vivid splashes of red 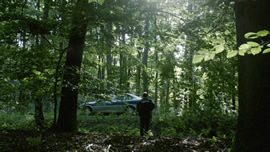 and amber. The actual gore quotient is fairly low but potent where it counts, including a memorable mass slaughter scene and a cleverly shot beheading, but the sense of unease is expertly built throughout as the film grows more and more surreal over the course of a single night.

Theatrically released in Germany in 2014, Der Samurai is definitely worthy of attention from genre fans and stands as one of the more interesting European genre exports of its year. A subtitled version was released in April of 2015 on DVD only in the UK (bearing the questionable tagline, "The deadliest thing from Germany since 1945"), but you're far better off going with the edition in the US from Artsploitation. This marks the courageous label's first foray into Blu-ray, at long last, and the film definitely deserves it as the intense, impressive visuals really shine here in all their glory. A DVD from the same source with identical extras is also available. Audio is presented in DTS-HD MA 5.1 and standard Dolby Digital 5.1, with the former sounding especially solid with the very effective soundtrack (including some great electric organ-tinged music) creating some nicely spooky effects. 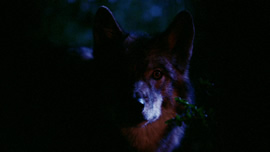 There's also an audio commentary with Kleinert and producer Linus De Paoli, discussing the fairy tale aspects they wanted to convey with the story, the difficulties of wolf wrangling, the decision to shoot with an Arri Alexa instead of 16mm due to the film's lengthy scenes in darkness, Bukowski's sword training (which mainly came into play for one impressive shot), the intentions behind the spectacular final sequence (which bears some intriguing visual parallels to Under the Skin, which would pair up nicely with this one), and Kleinert's attraction to "rude" guys. The main video extra is a 10-minute featurette with storyboards and film footage running through the concepts of the film with English subtitles (and no spoken narration, oddly) discussing the intricacies of the location shooting including the train jump and the cool process used to create that burning, living human head near the end of the film. Also included are the German trailer and bonus ones for House of 100 Eyes, Memory of the Dead, and The Treatment.