Standing with A Bucket of Blood as a rare successful example of "beat" horror, Dementia earned its place in most history books as the movie those teenagers are watching during the theater sequence of The Blob. 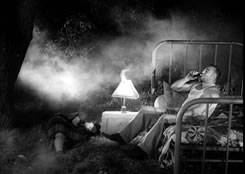 More seasoned horror buffs came to know it primarily through word of mouth and murky looking bootleg tapes as an avant garde curio which provoked the New York censors into fits. More bizarrely, it was slightly trimmed down, slathered in leering ooga-booga narration by Ed McMahon (yes, that Ed McMahon), and retitled Daughter of Horror, where it terrorized a few unsuspecting drive-ins, caused a few sleepless nights, and vanished off into the ether. Against all odds, Kino has resurrected Dementia in both its original form and its better known Daughter of Horror variant, and surprisingly enough, the results exceed one's expectations. 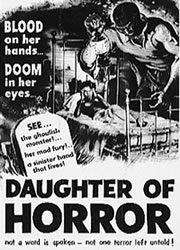 Devoid of dialogue, our expressionistic tale begins in a fleabag hotel room where the Gamine (Adrienne Barrett) tosses and turns in a feverish delirium. Decked out in black (plus a shiny medallion) and carrying a switchblade knife, she emerges into the dangerous city streets where the past and present intermingle. Many of the citizens lack faces, and one particularly spooky man escorts her to the cemetery where she relives a traumatic incident involving parental molestation and murder. She then winds up in the clutches of the Rich Man (Bruno Ve Sota), who drags her around to swanky nightspots and indulges in one of the more memorable late night meals in celluloid history. A scuffle ensures which finds our confused heroine running for her life, performed an impromptu amputation (in full public view), jamming out with Shorty Rogers and His Giants at a jazz club, and eventually spiralling into hysteria. Or does she...? 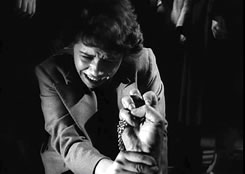 The difference between the two versions of Dementia on this DVD lies primarily in the narration, which turns a free form essay in madness into a campy, trashy delight in the vein of Ed Wood circa Glen or Glenda, albeit with slick cinematography. The original is no laughing matter, however, and somehow manages to pull off that tricky balancing act between art and sleaze; in fact, from the similar starfield opening to the German Expressionist lighting and sets, this would make a dandy double feature with The Night of the Hunter. Special kudos should also go to the elaborate musical team, consisting of a nonstop score by George Antheil, musical direction by the great and sorely missed Ernest Gold, and eerie abstract vocals by Marni Nixon, who dubbed some of the most high profile female actresses in '50s musicals.

For a film of its vintage, Dementia has survived surprisingly well. Apart from a few speckles and blemishes, the original version looks marvelous, with beautiful dark shadows and pure, clean gray scales. The notes on the box explain this was derived from the original negative, while Daughter of Horror was lifted from a rather good 35mm film print. The extras answer virtually any questions one could have about the film, thanks mainly to a lengthy and fascinating essay entitled "Dementia: A Case Study," delineating the violent censor battles and bizarre distribution back story. Other goodies include a Daughter of Horror trailer, a hilarious pressbook (check out those promotional suggestions), and a gallery of photographs. Obviously you should know what you're getting into before showing this to any family and friends, but Dementia is one wild ride worth taking.