The second of two duelling British ghost stories involving British vs. German armed forces during a world war (following 2001's The Bunker), this fog-drenched morality tale earned most of its press as the follow-up feature for Jamie Bell, 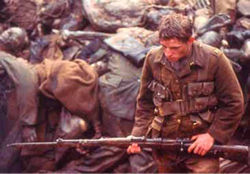 the young lead of Billy Elliot. Best described as a big budget Twilight Zone episode stretched out to feature length, this odd and occasionally effective spooker boasts some splashy gore effects and strong atmosphere despite a few missteps from its first time director.

A terrified, young Charlie Shakespeare (Bell) is forced by his superiors to cross over into enemy lines during a fierce World War I battle. Eight other soldiers follow him through the mist and mud, After wading through mist and mud, their leader, Captain Jennings (Laurence Fox), takes them into a trench which they occupy by killing all but one of the German soldiers (Torben Liebrecht). As the men are beaten down and scared out of their wits by being trapped in an unknown territory, they're also bumped off one by one by an unseen force with a penchant for barbed wire. The German survivor intones that an evil force already inhabits the trench, and the interlopers may be next on its list... 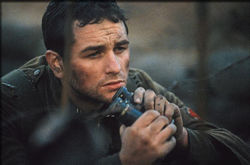 A dark and largely humourless affair, Deathwatch (which really could have used a better title) effectively evokes those hellish tableux readers often imagine while reading All Quiet on the Western Front. The injection of horror elements seems only a minor step away from the already nightmarish setting, and the film is at its best when the camera is simply allowed to prowl around the evocative sets, juxtaposing the actors' sweaty, bug-eyed faces against layers of wire mesh and splintered wood. In narrative terms this has all been done before, and most will probably approach this as Event Horizon in combat gear with a better twist ending. Much of the scenery chewing comes courtesy of Andy Serkis, now famous as The Lord of the Rings' Gollum; here he veers into sheer loony territory, ranting and raving at the camera until he finally gets his big scene in the spotlight. Gorehounds will get a kick out of the second half, when most of the murders finally kick in; 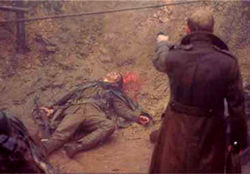 the gore isn't layered on non-stop but is undeniably effective when it does appear. However, one major debit for the music score, written by no less than three composers; it's a pompous mess that should have been scuttled in favor of something far more subtle.

At least the score sounds great, as do the explosions, on the DTS and 5.1 tracks on the Hong Kong NTSC Region 3 DVD. This is powerhouse audio material all the way from the opening credits, and you'll be constantly looking over your shoulder with a well-calibrated surround system. (A slight digital pop can be heard twice during the film for some reason, however.) Anamorphic image quality is quite good, nicely rendering the scope compositions throughout. The disc also contains optional English or Chinese subtitles with no additional extras, but it's priced low enough to be an attractive buying option. A British special edition from Pathe has been slated for a summer release, for those with PAL conversion capabilities. No American release date has been set, nor is one likely in the near future.

Buy this DVD now from