Virtually unseen outside Europe during its initial release during the brief frenzy of nunsploitation films pouring out of Italy, JOe D'Amato's strange and sleazy Images in a Convent (Immagini di un convento) earned its cult reputation entirely through the bootleg video circuit begun in the 1980s. Even though viewers usually had to contend with Italian dialogue and no subtitles, the mixture of evil satyr statues, 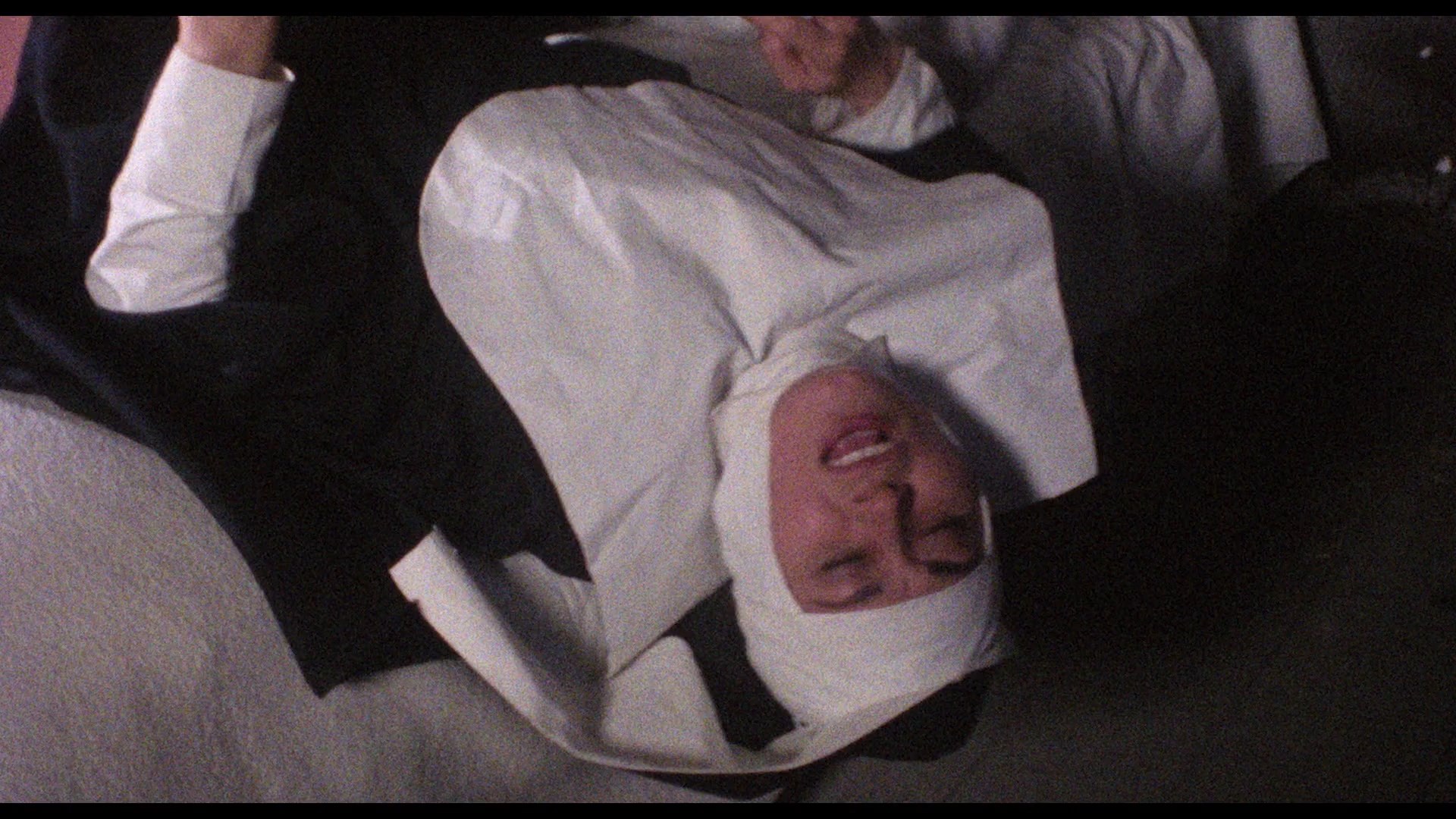 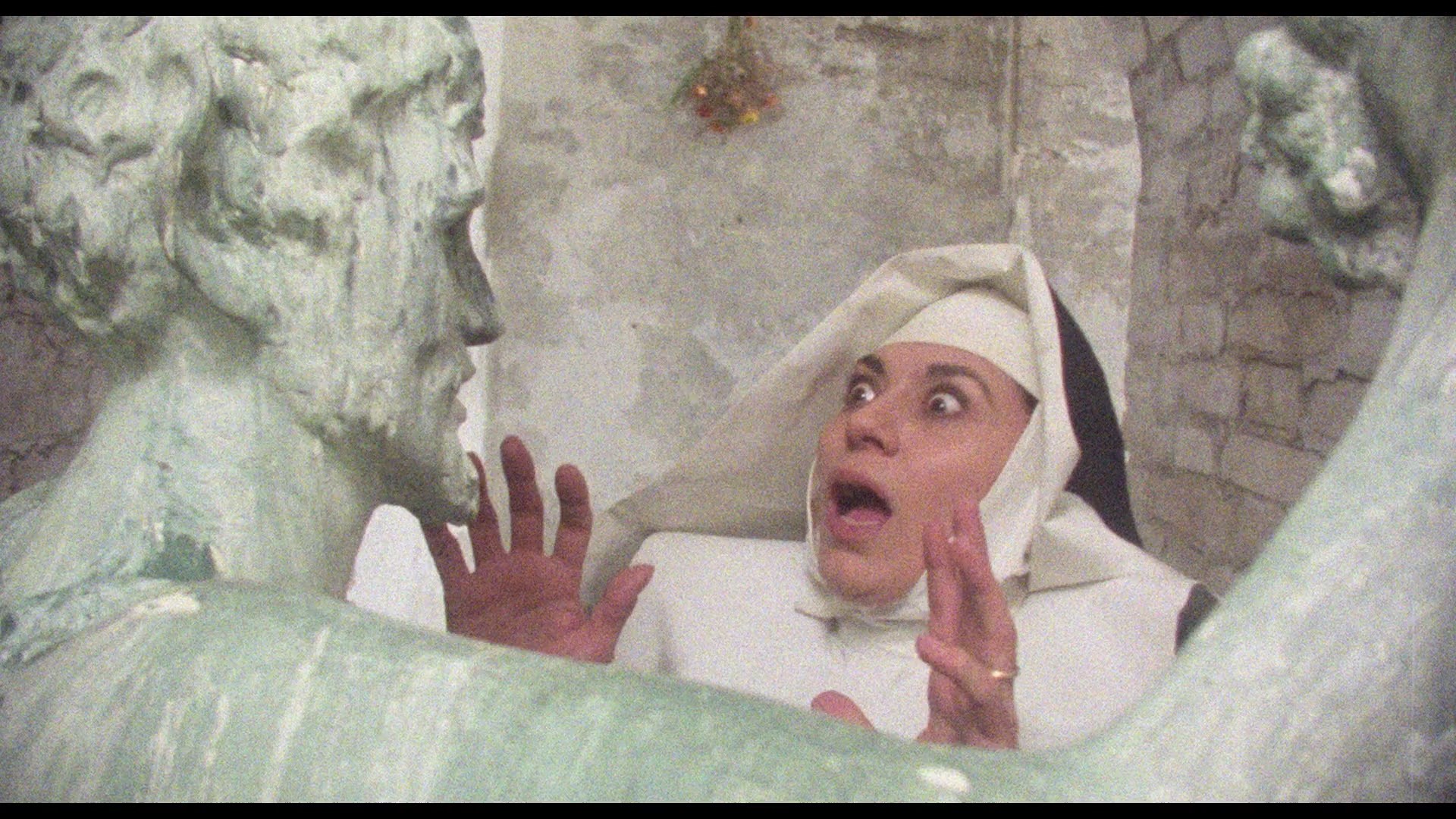 Still displaying traces of the visual gifts he brought to his fine work as a cinematographer in the early 1970s, director D'Amato doesn't skimp on the T&A but also delivers enough poetic moments to elevate the film a bit above the norm. The presence of a sinister ornamental statue tormenting the Mother Superior lends a haunting pagan atmosphere reminiscent of the classic Night Gallery druid episode, while Nico Fidenco's eerie score lends class to some of the more lyrical non-verbal passages. All of the actresses delve into their roles with gusto, shedding their habits when necessary and displaying figures refreshingly free from overzealous plastic surgery. All in all, it's a worth nunsploitation entry and, thanks to the aforementioned brief bits of semi-hardcore activity, one to pull out for those who think they've seen it all.

Media Blasters' DVD does an admirable job of coping with the demands of D'Amato's extremely soft-focus lensing, though contrary to the packaging promising a 16x9 transfer, it's flat 1.85:1 and, in order to activate the English subtitles, has to be watched windowboxed on widescreen televisions. Otherwise it's attractive enough and certainly better than those blurry tapes we've come to know and love. Apparently a short sequence involving the devil statue and one of 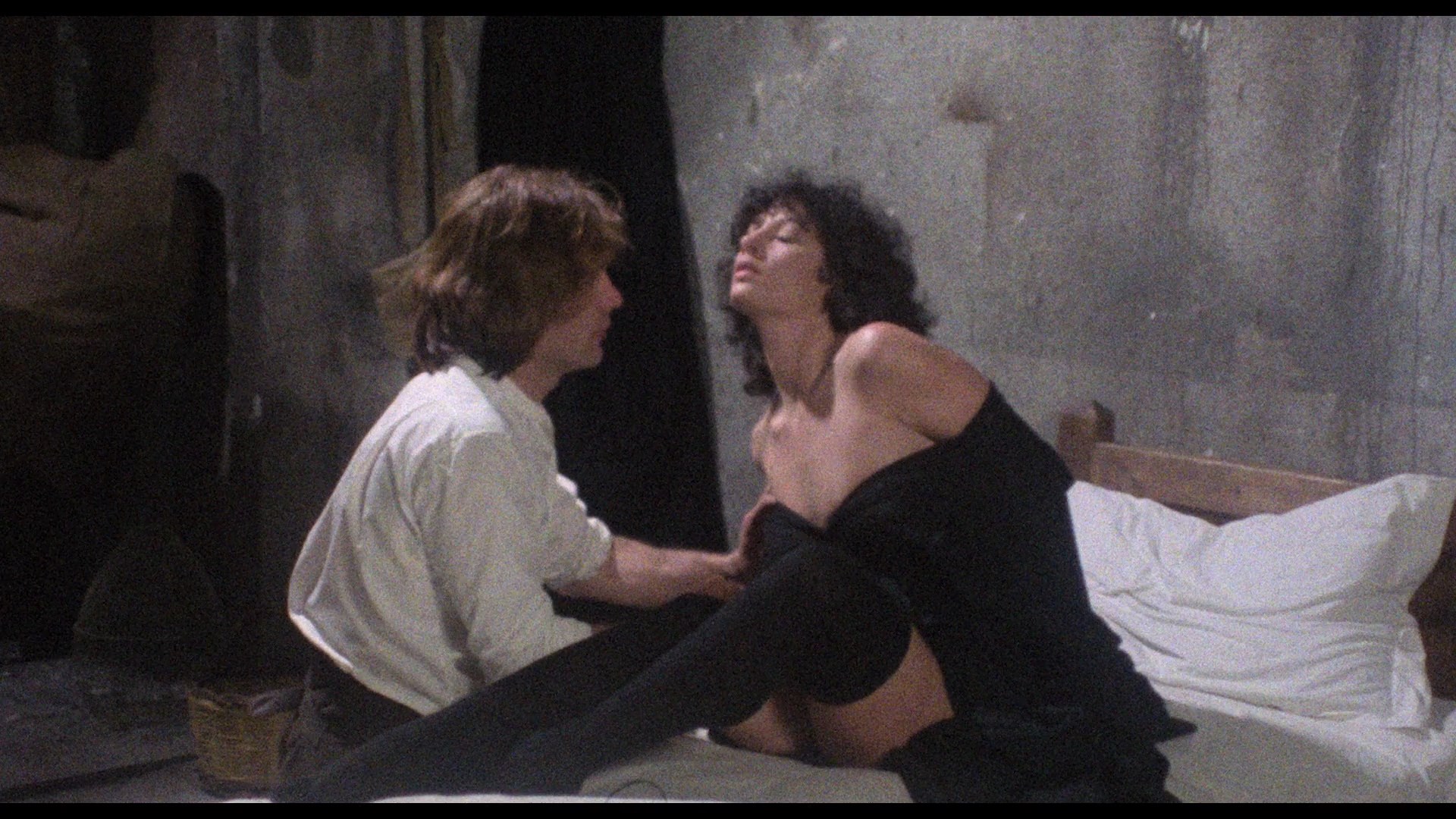 the lonely sisters was excised for some reason, so completists may want to hang onto their dupes anyway for posterity.

Apart from the main feature, the first disc includes the usual round of Media Blasters' "Exploitation Digital" trailers (Porno Holocaust, Yellow Emanuelle, and two SS films), while the real meat lies on the second disc. A familiar stape from X-Rated Kult Video's European D'Amato releases, the "Joe D'Amato: Totally Uncut!" Italian documentary pops up here with very welcome English subtitles. Circulated in a variety of versions depending on the video label, this edition clocks in a little over an hour and covers D'Amato's sex film career from artsy softcore to late-career shot-on-video hardcore. D'Amato cheerfully discusses his work, while ample clips demonstrate his proficiency with cinematic smut in all its permutations. On top of that you get girlie shots of Images's two female leads, and best of all, a lengthy reel of D'Amato trailers (mostly horror-related) including all of Media Blasters' releases (ranging from the early Buio Omega and Anthropophagus to later horrors like Killing Birds) and some surprising odd-man-out titles like Death Smiles at Murder (presumably culled from the Dutch DVD), Caligula: The Untold Story, and Orgasmo Nero.

Appropriately released the same year as Ruggero Deodato's Cannibal Holocaust, this goofy exploitation gem from the overly prolific Joe D'Amato offers a completely different kind of extreme experience than Deodato's gore-drenched atrocity. With a few gory splashes to liven up its tropical bump and grind footage, this monster mash for the raincoat

After a series of random sex scenes, they head out along with a handful of insatiable gals and spend most of their time walking up and down the beach. While Shannon continues to explore the native girls in graphic detail, a shuffling zombie attacks the infidels one by one and forces the women to accomodate its unusual manhood.

he opts out of the hardcore shenanigans and was apparently brought in for whatever marquee value he could muster. God only knows what the intended audience was for this film aside from cult movie fanatics (which is probably why you're reading this), but it's a real curiosity item that remains oddly compelling despite never being terribly arousing or horrifying.

Media Blasters' amusing packaging of this film in their "Exploitation Digital" series features a very nice anamorphic transfer similar to the one earlier on display in the German X-Rated Kult release, which the U.S. disc trumps by adding English subtitles. Honestly the dialogue doesn't count for much here, but at least D'Amato fans can finally decipher what the heck Eastman's character is up to. (The same transfer was also lifted for a gray market DVD release from Alfa Digital, rendered obsolete by this special edition.) The earliest DVD from Astro is also missing any English options (with only German and Italian tracks) but does throw in a nifty D'Amato retrospective featurette (without subtitles as well) featuring interviews with the director and generous film clips. In the extras department you get the original hardcore theatrical trailer, promos for other titles in the Exploitation Digital line, and a great interview with Eastman (looking a bit grayer but otherwise the same) in which he discusses his career with D'Amato; though the piece is rather strangely edited (picking up mid-comment with Eastman's discussion of Absurd), it's an entertaining overview of one of '70s exploitation's most beloved participants. Now could somebody get Laura Gemser on camera, please?

The first major solo effort in the director's chair for the infamous Joe D'Amato is a far cry from the sleaze in which he was destined to wallow. Best known for low budget horror films like The Grim Reaper and 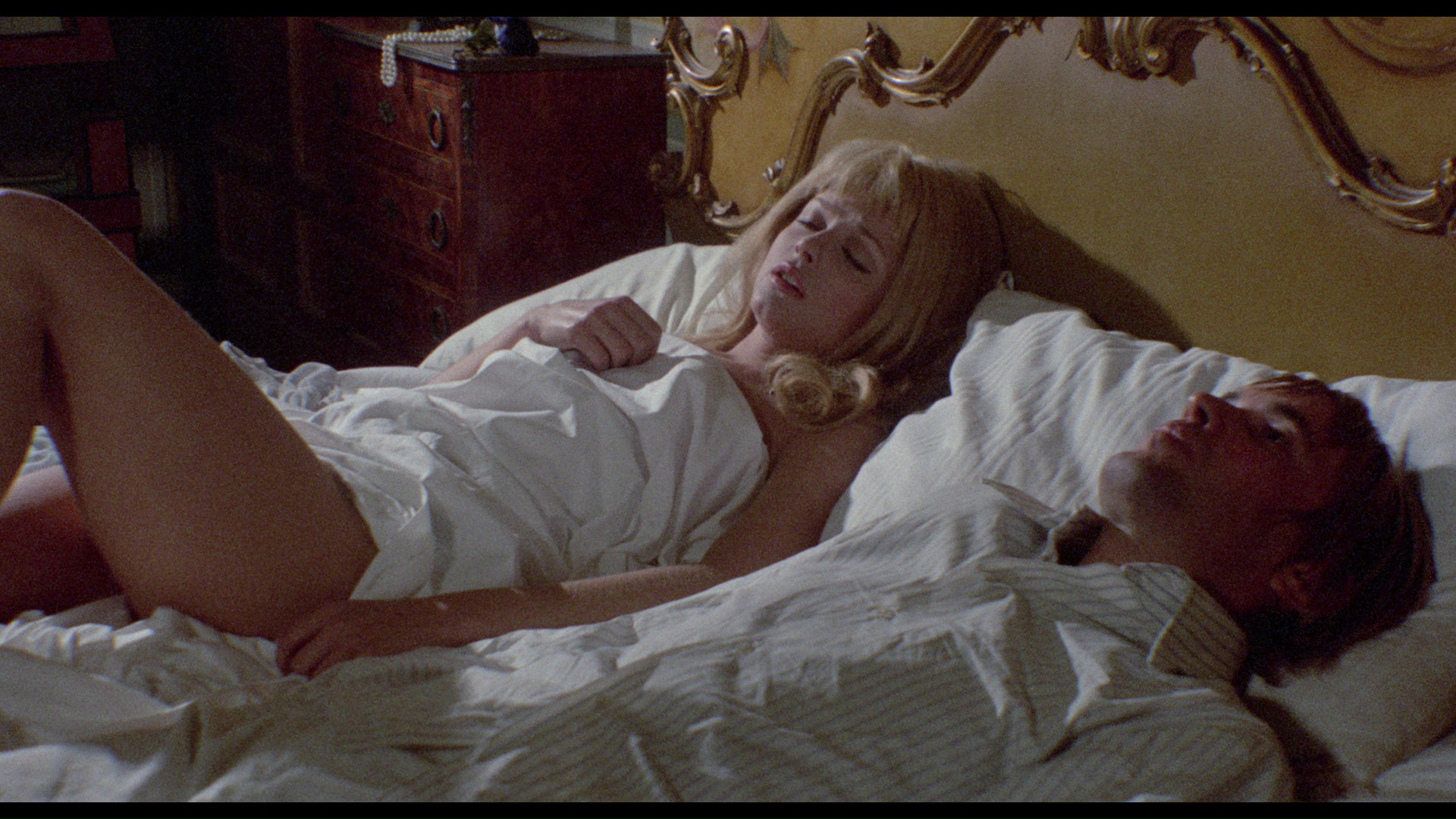 a bevy of soft and hardcore adult films, D'Amato began his career as a cinematographer before embarking on this peculiar film, a throwback to the Italian gothic tradition of the 1960s laced with some commercially viable helpings of nudity and gore.

The "plot" is so fragmented as to be nearly meaningless, but generally it concerns a beautiful young woman, Greta (Candy herself, Ewa Aulin), who suffers a nasty case of amnesia after a carriage crash which leaves her driver impaled on a broken wheel. She's taken in by a well-to-do couple, Sergio Doria and Angela Bo, and attended to by the curious Dr. Struges (Klaus Kinski in a glorified cameo), who treats her condition by ordering her to strip and then plunging a needle into her eye! While Greta seduces her hosts, the doctor returns to his nocturnal practices of reviving the 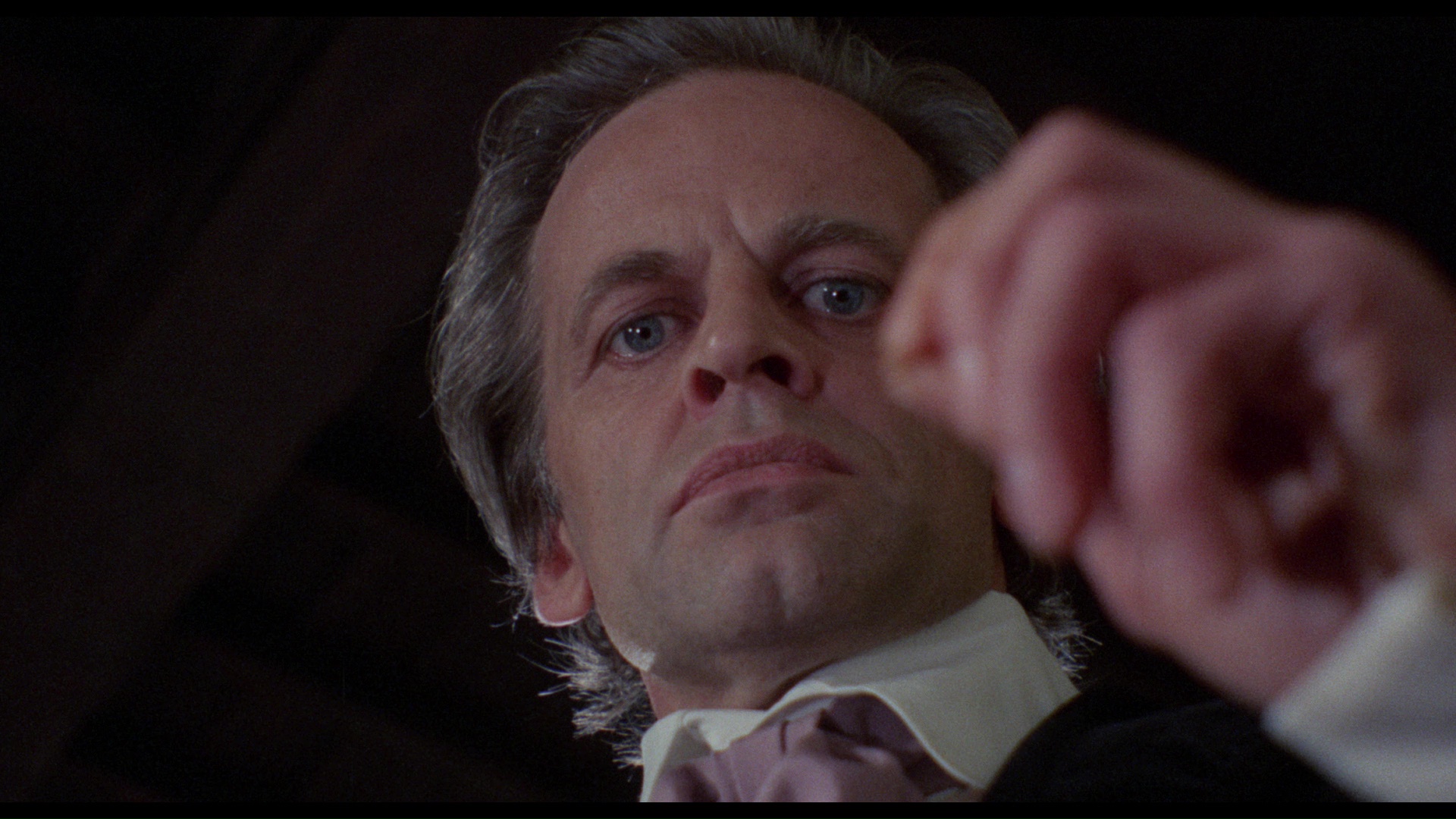 dead only to wind up murdered for his trouble. Meanwhile Greta's lunatic, hunchback brother (Luciano Rossi) skulks around in flashbacks and may be responsible for a series of killings, including the facial shotgunning of a lesbian maid who's been watching Greta. And then there's Walter (Kill Baby Kill's Giacomo Rossi Stuart), Greta's lover seen mostly in flashback, who's also experimenting with corpse reanimation. Throw in a couple of masked balls, an extended homage to Poe's "The Black Cat," and Aulin repeatedly returning from the dead as an avenging angel to wipe out most of the cast, and you've got the recipe for a very strange hour and half.

Not surprisingly, D'Amato's strong cinematography background serves him well. The eerie opening sequence, which finds Rossi grieving over Aulin's body, is a beautiful intro aided by Berto Pisano's haunting and ravishing score, easily the film's strongest asset. As the story lurches from one vignette to another, D'Amato's succession of fetching images and music keeps avid Eurocult fanatics glued to the screen even when they don't know what the hell is going on. The film's situation wasn't helped much when it went straight to American TV courtesy of Avco Embassy, who hacked it down to 70 minutes to fit an hour and a half time slot. This also meant removing all of the 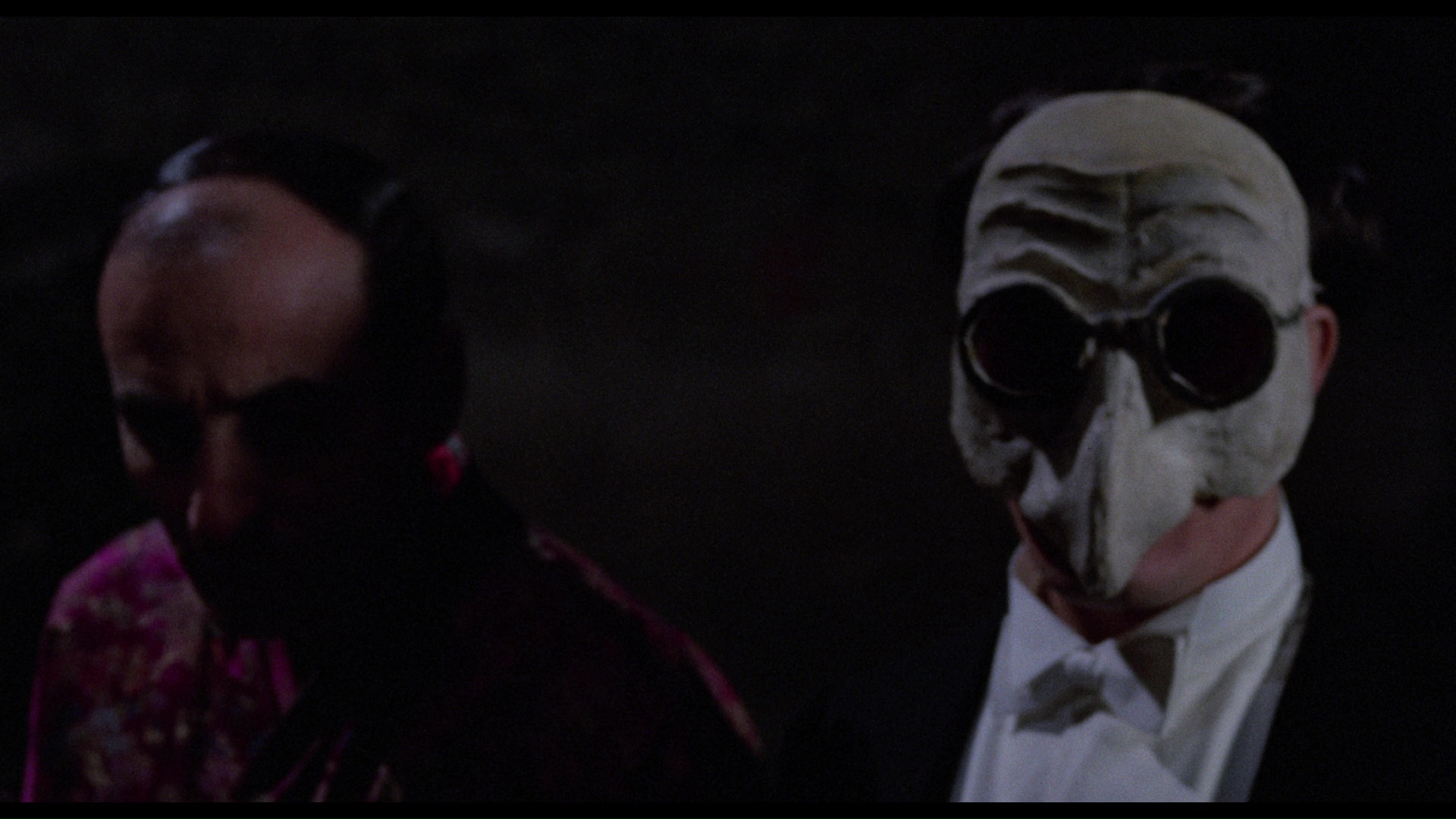 plentiful gore from the rousing finale, which features the world's only flying killer kitty bouquet.

A longtime staple of the bootleg video market, La morte ha sorriso all'assassino (translated on European prints as Death Smiles at Murder but shown in America under the more literal title of Death Smiles on a Murderer) has fared poorly on VHS, with the colorful but awkwardly cropped Greek VHS standing as the most watchable option. The Dutch region free DVD offers a solid widescreen transfer of the uncut European version and, most importantly, finally restores the original letterboxed framing. The transfer still has some problems, namely a few odd digital glitches in the upper letterbox band during the first five minutes and some wildly inconsistent black levels, but it's vastly preferable to any other option out there. Unfortunately the audio suffers from consistent crackling and noise during quieter dialogue scenes, but at least the score comes through well enough. Just don't play it too loudly through your receiver. The disc also includes the European theatrical trailer, a gallery of stills, and surprisingly insulting liner notes which, apart from some glaring factual errors, knock the film before offering a half hearted apology.