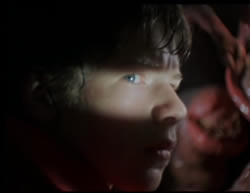 After crashing to earth in the middle of the night, a strange meteor disgorges an unseen alien force that swiftly takes out a nearby tentful of campers. At a nearby farmhouse, the hungry alien decides to set up shop in the dark, dingy, leaky basement of a nearby house and, 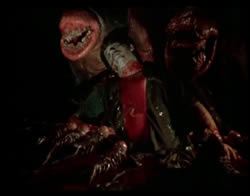 in the wee hours of the morning, makes breakfast out of the home's married owners (Neil and Brewster). A few hours later, the rest of the family remains oblivious to the terror lurking under their feet. Young monster fanatic Charlie (Hildebrandt) is concerend with pulling pranks, while older brother Pete (DeFranco), an aspiring astronomer, is focused on getting the family car for the night. More potential alien meat includes the boys' uncle and aunt, who are concerned about Charlie's obsession with "unhealthy" beasties. Naturally Charlie's the first one to discover the creature in the basement, which ralphs up his mother's head and sends a horde of scurrying, tadpole-style baby aliens out of the house. When three of Pete's friends arrive for a study group, all hell breaks loose as the house and the surrounding neighbors are terrorized by the unholy spawn from space.

A thoroughly enjoyable low budget monster fest, The Deadly Spawn (known to early '80s video junkies as the far more unwieldly Return of the Alien's Deadly Spawn back in its big box VHS days) is one of those love letters to the horror genre like Phantasm, The Evil Dead and Basket Case, albeit nowhere remotely as polished. Still its sincerity and overwhelming desire to please the audience easily gets the film past a few rough spots, and the limited funds were wisely dumped almost entirely into the effects budget. Sporting rows of razor-sharp teeth and chomping down everything in sight, the memorable creatures are a sure crowd pleaser every time they appear and have a knack for popping up every time the pace threatens to lag. Director Douglas McKeown also doesn't spare the red stuff, doling out some wonderfully gruesome effects akin to something from E.C. Comics. The third act is especially fun as the film turns into sort of an alien version of Straw Dogs, albeit with a wholly different final scene that caps th 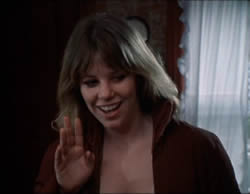 e film off perfectly. (Heck, it works so well they used it again almost verbatim in Deep Rising!)

A notoriously mistreated film on home video, The Deadly Spawn got its first respectable transfer courtesy of Synapse's DVD in 2004. The image quality is excellent for a no-budget 16mm projects shot in bits and pieces over a year; surprisingly, the extra clarity only helps the effects rather than exposing any potential flaws. Though it will never look slick enough to compete with recent Hollywood productions, the film at least looks watchable and not like a blurry piece of direct-to-video fare like those ancient videotapes. The mono audio is fine for what it is, and the long-in-the-works special edition DVD includes an admirably diverse set of extras. The first audio commentary features McKeown, Hildebrandt, co-writer Tim Sullivan, FX director John Dods, and executive producer Tim Hildebrandt; a second commentary features producer Ted A. Bohus. Both are filled with interesting anecdotes about the shooting of the film, including stories about the main house location and the fact that Paramount came close 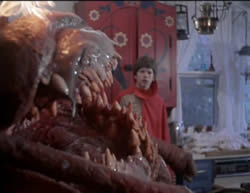 to releasing the film. (Hey, if they picked up The First Nudie Musical, why not?) Most of the film's lackluster distribution history is glossed over; for example, its heavy coverage in magazines like Fangoria never really paid off in box office success. Other goodies include a five-minute blooper and outtake reel (mostly just footage of the crew at work), a glossier alternate opening sequence used for the film's bare bones U.K. DVD release, a comic prequel about the aliens' origins, an archival look at Dods' effects workshop, a gallery of conceptual sketches, an effects demo, fifteen minutes of audition footage, a hefty still gallery divided into appropriate categories, a theatrical trailer (complete with that great red card at the beginning), and bios for McKeown, Tim Hildebrandt, Bohus, Dods, and Sullivan.

Subsequent stripped-down versions later appeared in several European territories (France, Italy, and Sweden), most containing just the theatrical trailer and alternate opening credits. However, 2012 saw no less than two new competing editions of the film: a region-free British release from Arrow (complete with some of their coolest cover art to date) and a US Blu-Ray from Elite Entertainment, whose waxy transfer (basically a slicked-over rehash of the DVD version) was so unsatisfying that rumors of an upgraded version began flying around almost immediately. Meanwhile, the Arrow version features a transfer that's nearly identical to the Synapse one except for a couple of slight variations; it's basically the exact reverse case of the label's companion release at the same time, Don't Go in the House. This time it's interlaced compared to its progressive stateside predecessor, though either due to a slight increase in resolution (it's encoded as NTSC but shows up a little funky on an Oppo display) or more modern compression techniques, it does look slightly more detailed (or at least the grain is more tightly rendered). It's a pretty slim difference overall though. As for extras, you get the alternate opening, blooper reel, comic prequel, audition footage, the workshop FX piece, and trailer, but Bohus chips in with a new commentary track in which he's joined by editor Marc Harwood. Most of it is basically variations on info from the two earlier commentaries, but Harwood in particular chips in with a few anecdotes about crafting the alien attack scenes with minimal resources and dealing with some very substantial production difficulties. Other goodies include a vintage (and very long) news segment about the film, a segment form a local cable access show with Harwood called "Take One," a different production slideshow, and a TV spot, plus a liner notes booklet with essays by Sullivan, Calum Waddell, and Dods. There's probably room on any self-respecting monster movie fan's shelf for both.