This lovably dopey splatter film could only have come from the early '80s, when the dying throes of disco and the influx of gore-soaked European horror films produced some truly strange animals indeed. While the title promises a spirited, gory romp in the tradition of George Romeo, this low budget New York production (partially shot in Egypt) comes a lot closer to Lucio Fulci territory instead. 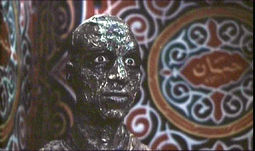 In the sticky prologue, a member of Egyptian royalty is graphically mummified (complete with organ removal) and placed into a pyramid crypt along with his slaves, who are entombed without body wrapping. About 3000 years or so later, some jewel thieves break into the pyramid and awake the mummy, along with his now zombified servants. A visiting cadre of Americans stumbles into the pyramid for a photo shoot, but the models are more concerned about the state of their toenails than the rampaging dead lurking in the darkness. Pretty soon the nearby Egyptian village is overrun by zombies, who pillage the natives in a riotous orgy of eye gouging and entrail munching (including the screen's most memorable wedding reception) before the ridiculous climax.

Okay, so it doesn't qualify as fine art by any stretch of the imagination, but Dawn of the Mummy can be loads of fun as long as you keep popcorn and some alcoholic refreshment handy. The long, slow stretches of dialogue in the middle at least offer some unintentional laughs, but most gore fans will definitely want to stick around for the big finale. The catchy, kitschy disco-on-the-Nile score is pretty amazing as well; did anyone actually buy the soundtrack album back in '81? While director Frank Agrama's pokey pacing can be maddening, he certainly knows how to stage a gore scene with panache and delivered one of the oddest, most endearing splatterfests of the period. 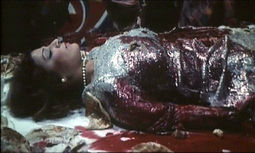 Laser Paradise issued the first DVD of Dawn of the Mummy after years of unavailability, and it was a slight improvement over the unwatchably murky Thorn/EMI VHS. Of course, this film always had the appearance of being projected on a strip of dirty burlap and suffers from pale, lifeless colors and shadows. The Anchor Bay disc in the UK is a noticeable step up though still limited by the mediocre nature of the original source material; the film's cinematography during the night scenes and crypt explorations is quite shoddy and features muddy lighting. Daylight scenes are crisp and colorful, however. The 5.1 remix is a lot of fun, delivering outrageously amplified sound effects and consistently exaggerated split surround effects. The original two-channel mix (advertised as stereo, but just barely) is also included for purists. The film can be viewed in either a full frame open matte presentation or a widescreen anamoprhic version with higher resolution; either one looks just fine, though 16:9 TV owners will want to opt for the latter. The disc also includes the full frame theatrical trailer and a commentary with Agrama, who makes for a lively commentator. As with his discussion on Queen Kong, he's full of stories about the location shooting and candid about the commercial conditions of filmmaking at the time. Needless to say, things have changed considerably since the days when a title like this could play at mainstream theaters around the world.

Buy this DVD now from

After her mincing leading man walks off the set, taskmaster director Luce Habit (camp TV staple Rula Lenska, bearing a striking resemblance to Fiona Lewis) looks for a way to salvage her jungle adventure film. When they return to London, salvation arrives in the form of Ray Fay (sex comedy regular Robin Askwith), a pun-prone jokester who traipses with the crew through the wilds of Lazanga-Where-They-Do-the-Konga (and drink Konga Cola) in search of the perfect locale. However, plans change when they stumble upon a bikini-clad tribe of cheesecake goddesses led by the always amazing Valerie Leon (Blood from the Mummy's Tomb), who swipes Ray off a ship (after an irrelevant Jaws parody) and arranges to have him stuffed into a giant wedding cake and sacrificed to the local god, Queen Kong. Upon arrival, the shambling, big-breasted ape sends Ray into a

quivering frenzy of fear, but the she-beast turns out to have amorous interests in her offering instead. Always interested in show business, Luce and company decide to capture Queen Kong and bring her back to London, where the usual havoc, chaos and groan-inducing punchlines ensue before the big climax involving Big Ben and a horde of angry feminists.

From the disco-inflected theme song to the cut-rate she-ape costume, Queen Kong inspires shocked disbelief more than guffaws but is rarely dull. The cast consists of a wide array of '70s-era talent, including a turn by scream queen Linda Hayden (Blood on Satan's Claw) as "the singing nun." While there isn't much sex to speak of beyond the usual emphasis on cleavage and batting eyelids, Queen Kong feels all the world like a typical sex comedy of the period thanks to Askwith's presence and lots of cheeky but not all that shocking one-liners. While it may not be quite as hilarious as King Kong Lives, you've got to give the filmmakers credit for trying.

Retromedia's disc of this rarely seen oddity is one of the strongest in their roster to date. The widescreen transfer looks colorful and fairly crisp, taken from an undamaged source. Framing and detail are both satisfactory. Mono audio is also consistently sharp, showcasing the unbelievable funk score by The Peppers (which has become something of a soundtrack collectible). Retromedia honcho Fred Olen Ray appears on an audio commentary track with the heavily accented and ingratiating Agrama, and the two have a fine time reminiscing about crafting this spoof on a threadbare budget and both display obvious love and affection for monster films. Also included is the original trailer, which probably never had the chance to pass through too many projectors.