Well, there aren't really any rich people to be found, but you do get lots of cops and cannibals in this sick, slap happy DV riff on the Texas Chainsaw Massacre cycle. Boasting more elaborate sets, locations, subplots, and gore effects than your average underground project, Eat the Rich (subtitled The Cannibal Murders) hops along briskly and, 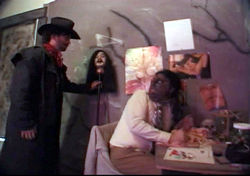 despite its technical shortcomings, makes for rousing party viewing.

In the prologue, our not terribly efficient FBI chief (who has a taste for loose women) and one of his underlings analyze the human remains from the latest in a series of cannibal killings. The lawman dismisses the flesh-eating scenario: "Maybe they just got in a fight and bit each other." Nevertheless, one intrepid agent begs to go out alone undercover and, while exploring a drainage sewer, winds up running into a ferocious killer. It turns out there's a clan of depraved goons living in the Nevada sewers: one tubby guy who takes to wearing a war helmet and sometimes a bag over his head (to disguise the scars from his mama whackin' him with an iron a few too many times), 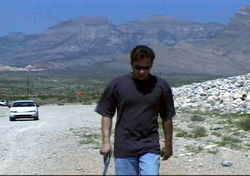 a drawling goofus with a painted-on mustache, and a third wearing a gas helmet who enjoys disembowelling his prey. Meanwhile the donut-scarfing officials slowly close in on the perpetrators, who continue to inflict all sorts of mayhem on the locals.

Apart from a few hair-raising set pieces (particularly the first sewer excursion, which is borderline nightmarish), Eat the Rich skews more towards broad, gore-soaked spoofery, including some funny dialogue passages that come out of nowhere (including one riotous scene with a necking couple in a car that nearly stops the movie in its tracks). The editing is also surprisingly ambitious, and if it weren't for some sloppy sound editing that renders the odd line of dialogue untelligible, this would be a prime example of how to pull off a horror movie with a minimal budget. 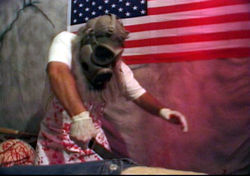 Continuing the double-disc treatment of director Ron Atkin's other titles, Eat the Rich is given its own entire platter for the film itself. Transfer quality is par for the course, about as sharp as the original material probably allows. The surround audio is extremely active throughout, and the electronic music is well-mixed and effective. The second disc contains a video interview with Atkins, a trailer, six alternate teasers spoofing The Blair Witch Project, and a whopping 20 minutes of deleted footage, containing a startling amount of sadistic sex and violence trimmed from the final cut.

In the tradition of such fringe atrocities as Bride of Frank, Schramm, and pretty much everything by Troma, this pair of nutso, shot-on-video efforts chronicles a serial killer's plunge into the depths of dementia. Granted, that's one of the more common themes for low budget filmmakers, but you have to give these guys credit for not pulling any punches and turning out a body of work that, um, speaks for itself. 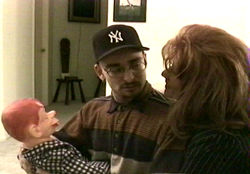 After receiving a creepy Howdy Doody ventiloquist doll named Rubberneck from his girlfriend Drew, fledgling serial killer Harry Russo (John Giancaspro) is driven over the edge by ranting voices in his head and goes on a frenetic rampage, beginning with Drew but soon expanding out to anyone within driving distance. While not raping, murdering, dancing to disco music in drag, and leaping around naked in parking lots while screaming at the camera, he takes time out to pee on a neighbor's bushes, shoots up in porno theaters, and drives around endlessly in his car on a one way trip to oblivion. 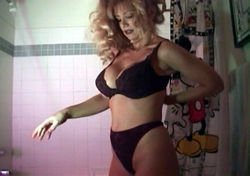 And that's about it, plot-wise. Best viewed straight through as one film, Schizophreniac (which has the demure onscreen subtitle, The Whore Mangler) and Necromaniac (Schizophreniac 2) douse the viewer in a cascading river of video nastiness, with plenty of fast cutting and flashy visual effects to keep the pace moving along briskly. Giancaspro is one seriously fearless actor to say the least, going from shrieking gibberish and gouging gory holes in his victims to borderline hardcore sex in a variety of seedy situations. The packaging dubs these "the vilest piece of filth ever to be filmed," and while that might be debatable (heck, did they ever see Forrest Gump?), it's definitely up there in the shock-for-shock's-sake home video pantheon. Fortunately there's also a lot of sick humor to lighten the experience; one early scene in the first film finds him angrily trying to order a Big Mac at a Wendy's, with profane results. 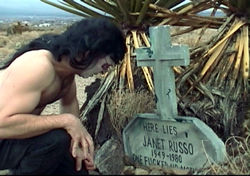 Both discs come in two-disc special editions (believe it or not), with similar bonus features: deleted scenes (most of them fairly tame and easily expendable), trailers, and video interviews with director Atkins, who also pops up in the second film as Jesus. (Really!) The film film also contains "A Walk with Harry," in which the lead actors goes on a tour of his neighborhood and reveals a little of his, uh, personality. (Watch it back to back with the "day in the life of Roger Watkins" featurette on The Last House on Dead End Street for maximum effect.) The second film also contains a music video, much in the style of those Necrophagia clips. You have been warned, and keep a warm bath handy after viewing.

It's not often you see a guy in a skull mask pontificating about the raptures of satanic worship while flanked by naked, drug-huffing college students being brainwashed into the joys of occult philosophy, all in a fog-enshrouded graveyard. But then you don't see too many movies like Dark Night of the Soul, either. 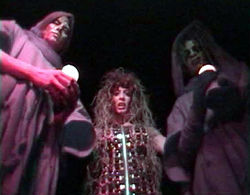 Lensed in Florida and openly dedicated to that low budget cemetery romp, Children Shouldn't Play with Dead Things, this oddball concoction bears some visual resemblance to that Alan Ormsby classic but tosses in some distorted drug trip sequences, a shaggy-haired and topless priestess of evil, a couple of plaster sphinxes, and some poetic touches worthy of Jean Rollin for good measure. The plot is skimpy as can be: ostracized cult leader Shawn (the aforementioned masked man) and his zombie sidekicks preside over dark ceremonies in a graveyard, where a passing quartet of brainless, homophobic students fall into his clutches. The skulled one seems to control their gradual initiation into depravity, with tarot cards used as repeated symbolic illustrations for good measure, but his conspirators may have a few surprises in store themselves. 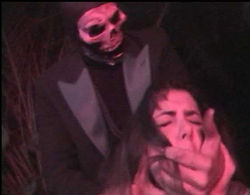 Though virtually devoid of bloodshed, Dark NIght of the Soul compensates with plenty of bare flesh (including a brunette who, according to the supplements, became an Internet porn starlet) and the ripest dialogue this side of an Andy Milligan rant. The nonexistent budget undercuts the filmmakers' attempts at times, particularly during some ill-advised solarized footage, but surprisingly enough, the tinted trip sequences are oddly effective and eyeball-punishing. A handy abandoned monastery serves as the primary set apart from the graveyard, and the director milks it for all the atmosphere it's worth. As with Rollin, forward narrative propulsion isn't much of a priority here, but there are other rewards to be found. Bonus points for the continuously droning, eerie electronic score (courtesy of "The Unquiet Void"), which is reminiscent of the old Bob Clark days and keeps those surround speakers constantly humming. 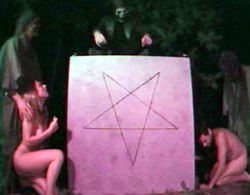 An under the radar release from fledgling company Cutthroat Video, this film has been given a relatively lavish two-disc treatment. Taken from what purports to be the only surviving element, the transfer looks watchable enough despite some inherent color bleeding which seems to be inherent in the original photography. On the other hand, even the darkest scenes were lensed skillfully enough to keep detail visible and clear. Don't expect the clarity to approach anything resembling slick. Bonus goodies include a trailer, four teasers, an interview with director Atkins (which was apparently so shattered by the film's tortuous production and subsequent reception that he virtually disowned it for a long period afterwards), and a 50-minute documentary covering the film's production.