No horror film had a bigger impact on the first half of the 1980s than Friday the 13th, the surprise hit film picked up by

Paramount and ushered to box office glory with young audiences flocking in droves. The idea of teens getting killed off in the middle of nowhere was hardly new when the first film was released in 1980, but the execution made all the difference here. Stripped down to its bare basics and filled with relatable, likable characters, the film captures the disoriented, primal feeling of adolescence, which is always shadowed by reports of adults doing horrible things to each other and possibly coming after their young at any moment. The MPAA somehow let the film slide with only a handful of brief cuts, but the moral outcry resulted in a serious clamping down on its sequel the next year (as well as several other slashers in 1981). The iconic character of Jason really took center stage in that second film but became a megastar with the third, shot in 3-D and given a more mainstream sheen that would become even more pronounced in future sequels. After that Jason was killed off, imitated, resurrected, pitted against a telekinetic teen, turned into a supernatural worm, shuttled off to the Big Apple and outer space, pitted against Freddy Krueger, and even remade, almost always with his trademark hockey mask intact.

In 2005, the series took a surprising turn when it became the subject of a lavish, lovingly assembled coffee table book by Peter Bracke entitled Crystal Lake Memories: The Complete History of Friday the 13th. Still a genre benchmark, it was a huge boost for fans who had endured decades of critical derision against their machete-wielding icon and still makes for a spectacularly good read. Almost four years later, Anchor Bay released a DVD of a modest documentary entitled His Name Was Jason: 30 Years of Friday the 13th, directed by Daniel Ferrands. It was a nice shot at the time but limited by the decision to assemble cast and crew members to strictly talk about the character of Jason rather than the making of the entire series, leaving plenty of room for improvement.

In 2010 the bar was set much, much higher when Ferrands and company turned to another major horror series to produce the epic-length Never Sleep Again: The Elm Street Legacy, a superlative achievement that catapulted far past fans' expectations and now stands as an essential document of American horror cinema. (That's not hyperbole; it really is that good.)

While other horror stalwarts like Chucky and Pinhead haven't gotten the doc treatment (and Michael Myers is still sorely underrepresented), it was obvious Jason and pals were deserving of the same extensive salute given to Freddy. Thankfully you'll get that in spades with the 2013 documentary bearing the same title as Bracke's book,

running a sprawling six and a half hours and covering everything you could possibly want to know about the series (and a bit about the Jason-less TV series of the same name, too). You can see a full laundry list of the participants here, and it's safe to say that this is truly pay dirt for Friday fans with a host of anecdotes about each film with a chapter of the documentary devoted to each one, so you don't have to gorge on everything in one sitting. But you'll probably want to. The familiar tales about the first two films (which have been covered at several conventions) are all here, of course, but even the most despised entries (cough cough, Jason Goes to Hell, cough cough) get their due. Each entry has its own fans, of course, and that attitude carries over here nicely with just enough candid admissions to keep things a little juicy.

The usual beloved suspects are here, of course, including Sean S. Cunningham, Tom Savini, Adrienne King, Betsy Palmer, Amy Steel, Russell Todd, Kane Hodder, Ari Lehman, and Harry Manfredini. However, in a wise move, Corey Feldman (the first of multiple Tommy Jarvii) was chosen to narrate the whole thing (including a cool campfire wraparound), and some surprise appearances pop up including the star of the third film, Dana Kimmell,

who caught flack from some fans thanks to press coverage at the time but proves to have a much more game and charming outlook on the film now. Also welcome is the lovely Kimberly Beck, star of The Final Chapter, who reinforces her status as one of the series' stronger final girls. Who else pops up? Well, how about Alice Cooper, Robert Englund, Ronny Yu, and a host of others, totally satisfying any hunger left after the fine but all too brief featurettes compiled years ago for the DVD releases of the films. (And the less said about Warner's lazy Blu-ray set released almost concurrently with this, the better.) Nope, you won't see Kevin Bacon or Crispin Glover here, but did you really expect to? Recurring themes include the creation of latex effects, the ongoing battles with the MPAA (which are still enough to make a horror fan cry), the creation and evolution of Jason's appearance, visits to shooting locations, and the changing demands of movie studios and horror audiences, including the series' rocky transition from Paramount to New Line (which spun the much-anticipated Freddy vs. Jason into turnaround

The doc is spread out over two Blu-rays and two DVDs, and as expected, the picture quality varies a bit depending on the source. Some interviews were shot much earlier than others, but overall the new footage looks fantastic. The copious film clips look fine, too (comparable to the HD transfers available separately) and the hundreds of behind-the-scenes shots (some of which will be new to even series fanatics) really benefit from the clarity of HD. The 5.1 audio mix sounds fine for a production that's essentially talking heads and music; nothing to really carp about at all. Incredibly, there's also a full commentary with director Daniel Farrands, author Peter M. Bracke, and editor Luke Rafalowski, who hopefully got to take plenty of water and bathroom breaks while they were recording. Optional English and Spanish subtitles are included, too ("Futuras victimas potenciales!") along with bonus trailers for Never Sleep Again and More Brains! A Return to the Living Dead, plus a promo for Adrienne King's Crystal Lake Wines. 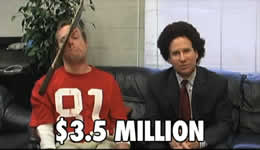 For real completists, there's also a bonus third DVD (or fifth disc overall if you're counting) available in limited quantities directly from 1428 Films containing a whopping four hours and twenty minutes of extra interview footage. It's very roughly edited (with green screens aplenty) but worth checking out, including more comments from many of the participants including Sean Cunningham, Victor Miller, Noel Cunningham, Tom Savini, Greg Nicotero, Ari Lehman, Betsy Palmer, Jeannine Taylor, Adrienne King (who shows off some Jason-inspired pieces of her artwork), Harry Manfredini, Steve Daskawisz, Amy Steel, Warrington Gillette, Russell Todd, Jack Marks, Lauren Marie-Taylor, Richard Brooker, Tracie Savage, Gloria Charles, Frank Mancuso Jr., Dana Kimmell, Petru Popescu, Larry Zerner, Joseph Zito (talking about The Prowler), Barney Cohen, Corey Feldman, casting director Fern Champion, Thom Matthews, Cynthia Kania, Chuck Campbell, Ronny Yu, and Robert Englund. There's even a goofy fake TV commercial for legal representation for Jason's victims, too, and some really out of left field tangents including a mention of Daniel Pearl. Brace yourself for the last five musical minutes, too, which will remain unspoiled here. So in the end, is this better than Never Sleep Again? That will probably depend on your fondness for each series, but honestly, no horror fan should be without either of 'em. A huge machete-held salute to this one all the way.