One of the oldest standbys in

erotic films is the tale of a woman who leads a double life as a good girl and a prostitute, but it gets a peculiar roughie makeover in one of director Anthony Spinelli's most widely-released films, Cry for Cindy. Sporting a tone that makes it feel like an after school special gone very, very wrong, it leaps back and forth in time at the funeral of Cindy (Candy Stripers' Hunt, making her debut here after a celebrated appearance in Hustler) after she's thrown herself out of a window. We first see Cindy at work with a client (Lyon) and then with her brutal pimp (Wright, credited here as Mark McGuire), who smacks her around and then engages in some rough sex. As it turns out, Cindy's only doing this kind of work to help her boyfriend Dennis (Travis, here going as Fred James) get through med school. However, when Dennis busts in on them, all hell breaks loose. From there we find out how Cindy got roped into the biz courtesy of a couple of working girls (Fisher and Fraser) and got a taste of the wild life with johns including familiar faces like John Leslie and John Seeman.

Complete with a maudlin theme song, a wide variety of locales, and very high production values for the time, Cry for Cindy works today as a wild time capsule of mid-'70s excess

complete with wild tonal shifts, extreme hairdos, and melodrama galore. The actual sex scenes are variable in quality (the last one is probably the best), but Hunt manages to hold in her own in a sort-of-dual role that remained the high point of her relatively brief career. It's odd that the entire storyline is completely laid out a third of the way in (which essentially leaves the characters to fill in lots of back story and copulate for the remaining hour), but fortunately Spinelli is enough of a pro to keep the action engaging with a complete newcomer right at the center.

Cry for Cindy was issued on VHS by Arrow back in the early days of home video, but it pales in comparison to the two-disc release from Vinegar Syndrome as part of its laudable Peekarama series. In keeping with their standards, the image quality of this new HD transfer from the original negative is very impressive with punchy colors and very sharp detail, which is either a positive or a negative depending on your stance on '70s grooming. In addition to the two Spinelli co-features on the same release, disc two also has the softcore version of Cry for Cindy, taken from a less pristine film element with an opening disclaimer that this was added at the last minute as a bonus for fans. It obviously runs quite a bit shorter and plays much darker without the extended sex scenes, and the small dollops of alternate takes make it a fascinating curio for completists.

Also on the first disc is another,

earlier Spinelli feature, Touch Me, which features early porn power couple Rene Bond and Ric Lutze among its stable of recruits for a weekend relationship encounter session overseen by sex therapist Dr. Davis (Stevens). It's all basically Harrad Experiment-type stuff as they learn to get touchy feely and roll around naked on the floor with each other, eventually pairing off in various arrangements to explore each other. Bond gets a lesbian scene with Suzanne Fields, who next gets together with The Suckers' Richard Smedley, while Sandy Dempsey gets three different couplings all on her own (the last a pretty disturbing non-consensual one with Lutze). Also among the attendees are The Pigkeeper's

Daughter's John Keith (who, in keeping with his few other explicit roles like Bride's Delight, has obvious performance issues and gets weirdly body doubled by Lutze) and veteran character actor George "Buck" Flower, who turned up in lots of Harry Novak films before a regular mainstream career in films like Back to the Future and Pumpkinhead. 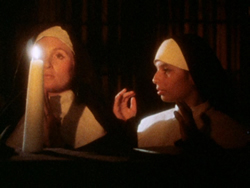 Aquarius, this was issued in the '80s on VHS by Select-a-Tape, a pretty miserable transfer later recycled by Alpha Blue as both a VHS and a Rene Bond DVD triple feature. Again the Vinegar Syndrome release is a massive improvement in every way, looking sparkly flesh with all of its eye-punishing carpeting and endless undulating flesh tones all captured to perfection. 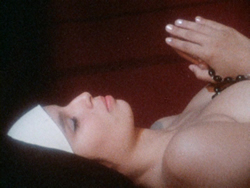 is anything but ordinary. Among the spectacles on display between her and Sister Jennifer (industry vet Summers) are sapphic interludes with each other and lewd variations on holy communion and confession with the local monks (Anthony and Francis) and father confessor (Erickson). The entire film's soundtrack consists of voice over by Durey and relentless gregorian chant music which, coupled with the soft focus photography, gives the entire production a strangely dreamlike atmosphere far removed from your average skin flick.

Currently the only surviving film element for An Act of Confession is the softcore version, which clocks in at just under an hour (as opposed to the hardcore 68-minute version). 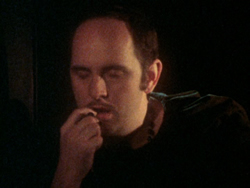 Even without the close ups it's still pretty strong stuff as our heroine indulges in fantasies that will still make some viewers squirm, including a startling sequence with Durey lashed to a cross and violated against an altar. Even more jarring is the grand finale clearly inspired by Vanessa Redgrave's hallucination with Oliver Reed in The Devils in which Durey has a vision of Jesus Christ (Manuel) walking across the water before she indulges in an unorthodox act of worship. This was missing almost entirely from the only previous video edition, a washed out, heavily damaged, and blurry gray market release from Alpha Blue Archives, though that one does include the earlier hardcore material. Interestingly this final scene was only filmed softcore, which is probably just as well given the fact that it already crosses a line that may be too much for many viewers. The transfer looks quite nice considering it's from a 16mm print, and barring the discovery of a better print down the road someday, it's a laudable addition to one of the most fascinating installments so far in Vinegar Syndrome's ongoing mission to preserve these audacious gems for modern audiences.