An eerie work of horror both on screen and in real life, The Crow was notorious before its release as the film whose shooting claimed the life of Brandon Lee, Bruce Lee's son, due to a firearms accident. The film was completed using digital effects and a body double for some uncompleted shots, 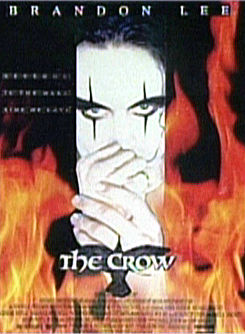 and fortunately the final result managed to overcome its reputation to emerge as one of the most significant comic adaptations ever filmed. Years after its release, the film can now be more clearly assessed as a groundbreaking work of cinematic art, even if the long overdue special edition from Miramax/Dimension leaves something to be desired.

Set in one of those perpetually dark, rainy cities, The Crow begins with the murder of musician Eric Draven (Lee) and his fiancee, Shelly, on Devil's Night, October 30. The perpetrators are Top Dollar (Michael Wincott) and his motley crew of criminal henchmen, including T-Bird (The Warriors' David Patrick Kelly) and Grange (Tony Todd). Albrecht (Ernie Hudson), one of the investigating officers, tries to help the dead couple's young friend, Darla (Anna Levine), cope with the tragedy. One year later, a crow from the netherworld summons Eric from the grave to avenge the evil deed, and he dons black and white stage make up as well as a black body suit before embarking on his violent quest for retribution. Seemingly impervious to physical harm, he picks off his enemies one by one while grieving for his lost love and maintaining some semblance of contact with the friends he left behind.

Director Alex Proyas, who followed this up with the equally flashy but far less satisfying Dark City, does a magnificent job of transferring James O'Barr's series of graphic stories to cinematic life. For once the grungy cinematography, music video editing, and hyperkinetic violence which have been beaten to death in countless neo noir films clicks perfectly here, most likely due to the dovetailing subject matter involving death, loss, and emotional disconnection. While Lee isn't exactly called upon to do any tremendous acting, he's a gripping presence in the film and maintains a sense of purpose and emotional anguish during his action sequences. The musical combination of goth rock and Graeme Revell's dense, haunting score is also a textbook example of how to make a Top 40 friendly soundtrack without tearing up the fabric of the film.

Two cinematic sequels and one television series followed this, but none could come close to duplicating the original's impact.

The first DVD of The Crow was something of a mess, carrying over the old letterboxed laserdisc transfer to disastrous effect. This much needed anamorphic upgrade looks much closer to the theatrical experience, but bear in mind that the original film was shot with strange, color saturated shadows and some intentional grain. The juiced up Dolby Digital 5.1 and DTS tracks sound terrific; nary a scene goes by without some wild directional effects swooping through every speaker, but the separation is integrated well without jarring the viewer from the film itself.

Inexplicably, this special edition of The Crow has been spread out to two discs, perhaps to accommodate the extra audio information on the film itself. First up is a decent commentary track by producer Jeff Most and screenwriter John Shirley, who offer some insights into the process of adapting a comic and the technical challenges posed by the production. The absence of Proyas and co-writer David Schow is sorely felt, however, and much material feels left uncovered. The second disc contains a standard 20 minute promotional featurette, including interviews conducted on the set with Lee, Todd, Kelly, and other cast members. The disc also features a camcorder interview with O'Barr (recorded in his basement in 2000) and a handful of extended scenes, including the truncated arcade fight from the beginning of the film. A "deleted scenes montage" cobbles together about five minutes of random trims from the film, though the infamous deleted Skull Cowboy sequence with Michael Berryman is conspicuously absent. Several galleries run through some unused poster designs, "production design stills" which look like a combination of storyboards and O'Barr's artwork, and some more standard storyboards. PC DVD-Rom users can also access the film's screenplay to run concurrently with the movie, as well as a trivia game and an option to view the film with a series of pop up quotes and factoids, similar to Universal's trivia gimmick on the Bring It On DVD (but less smoothly integrated here). It's an interesting package, but considering the potential for supplements with this film, the extravagance of a two disc set promises more than it actually delivers. Apart from some of the more obvious deleted footage still MIA, the disc doesn't even include any of the film's striking theatrical trailers or TV spots. Too bad, but at least they finally got the transfer right. Also available in a box set with the two sequels, which are recommended only to die hard Crow fans.