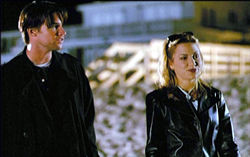 A band of seaside vampires prey on the tourist trade by night (cue the amusement park music), though the bloodsuckers experience some animosity between badass loner Viktoria (Marisa Ryan), her blood-abstaining and self-destructive best friend Alicia (former Power Ranger Amy Jo Johnson), and the dominating, stalker-prone Charles (Christopher Wiehl). Into this unhappy clan comes the mysterious Seth (Robert Floyd), a seemingly nice schmuck who brings out Viktoria's long dormant better instincts. Charles and his cronies, including sidekick Christan Campbell (Neve's brother and star of Trick), don't take kindly to Seth's intrusion but face a number of unexpected surprises during their final showdown. 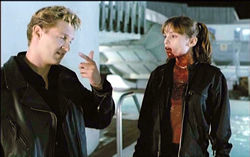 Shot like an Aaron Spelling TV show with a little blood thrown into the mix, Cold Hearts constantly teeters on the verge of becoming something outrageous, wild, or kinky, but unfortunately it keeps reeling back in. The flimsy acting and erratic special effects (supervised by Tom Savini's disciples) don't really help matters either, though director Robert Masciantonio (who also pops up in a minor role) tries to keep things interesting with lots of moody neon lighting and a handful of shock set pieces; unfortunately even one promising and well-handled bit at a waterslide backs off from exploring the full horrific, comic, or erotic potential of its set up. The gimmicky twist ending would have also probably packed a much stronger punch if HBO's Tales from the Crypt hadn't already used the same exact device in a more imaginative fashion. Horror fans will probably find it all mildly diverting, and overall the finished product is certainly competent, but one can only wonder how much more powerful it could have been. 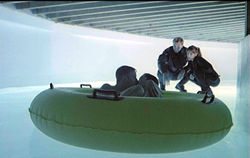 First released on a gritty-looking British DVD with Johnson receiving top billing, Cold Hearts fares better via Synapse's special edition. The licensor could only provide a non-anamorphic widescreen transfer, but that one obvious caveat aside, the film looks good considering its miniscule budget. The grainy night scenes still have a film-like look which avoids any distracting pixillation and other compression problems, and the limited surround audio is fine given the limited original mix. Masciantonio contributes a solid commentary track in which, par for the course for recent independent budget horror efforts, he covers the professional challenges of mounting a production on this scale. He seems to keep the film in perspective most of the time, revealing himself to be more of a craftsman than a nervy artist. The disc also includes a promotional trailer used to push the film at festivals, an oddball short film by the director entitled "Jerks," a still gallery, and raw footage of original cast audition tapes which appears to be lifted from better than average VHS.