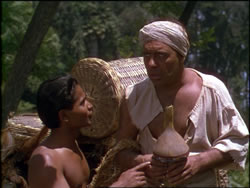 Hollywood films don't come much madder than this outrageous '40s Technicolor phantasmagoria, an overripe exotic adventure whose campy excesses inspired an entire generation of avant garde classics like Flaming Creatures and Sins of the Fleshapoids. A luscious screen presence if never a particularly good actress, sex symbol Maria Montez became a box office draw during World War II in wild adventures like Arabian Nights and Ali Baba and the Forty Thieves. Apparently someone at Universal decided that if one Montez brought in lots of audiences, then putting her in a double role as good and evil twins would also mean a huge box office boost. The results are, to say the least, staggering. 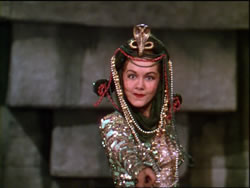 Sweet Pacific islander Tollea is engaged to the burly sailor Ramu (Hall), who hangs around with a very young boy, Kado (Sabu), and a chimp in diapers for company. When Tollea is snatched off their ship, he learns that she has a diabolical twin sister, Naja, who's the pampered princess of a remote island whose denizens worship a cobra god and murder anyone who sets foot on their shores. Apparently Naja is none too pleased that her sister could swipe the throne if she so chooses, so it's execution time... and when Ramu winds up in the villainess' clutches as well, she decides to take him for herself, too. 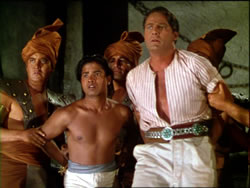 For the first 20 minutes or so, Cobra Woman doesn't feel all that different from your average South Seas actioner; however, once the evil Montez takes center stage, the film catapults into the strasphere of cinematic insanity as she makes an unforgettable entrance doing her "cobra dance," gyrating around and pointing to unlucky, screaming female attendees to be sacrificed to their snake god. Then you have a visibly intoxicated Lon Chaney Jr. as a deaf-mute priest, Sabu in bondage for no good reason, and The Philadelphia Story's Mary Nash looking very Caucasian and out of place as Montez's royal mom. Incredibly, this was directed by the underrated Robert Siodmak right after Son of Dracula and prior to his other, more respectable good/evil twin movie, The Dark Mirror, along with other notable thrillers like The Spiral Staircase, Criss Cross, Phantom Lady, and The Killers. God only knows how much he was chuckling to himself behind the camera during this one.

For some unknown reason, Universal has been incredibly stingy by keeping Cobra Woman out of circulation on American home video despite circulating new prints every few years to stun unprepared repertory audiences. At least they've licensed it out overseas, first to France (whose Carlotta label put it out separately and as part of a three-film Siodmak collection) and, much more recently, to Odeon in the UK. The Odeon disc looks pretty terrific and captures the saturated colors of original Technicolor prints with admirable fidelity, and the compression here is a bit better than the French one. Prepare to have your eyes melted by some of the greenest greens and reddest reds you can possibly handle. The lurid original theatrical trailer is the only notable extra.