Drive-in films always had a really strange relationship with feminism, from the free love body liberation of the '60s through the

social and professional women's lib movement of the '70s and early '80s. Whether we're talking about Roger Corman films with adventurous nurses and students or female vigilante trash epics, there's enough material here to fuel dozens of college term papers. However, you probably won't find a weirder example than the unique case of Class of '74 and Gabriella, Gabriella, two films sharing a lot of footage but telling markedly different stories about the changing sexual climate of the early '70s.

First up on this Code Red release is The Class of '74, which is credited to two directors, Arthur Marks (Bonnie's Kids) and Mack Bing (All the Loving Couples), and bears all the signs of a patchwork creation. We start with a quartet of chatty college students wandering around talking about the major issues of the day, at least when they aren't busy shaking their stuff in bikinis or splashing around naked in swimming pools over the credits. Gabriella (Mills, credited here as "Barbara Caron") is the newest and least experienced of the bunch, who like to pontificate about the roles of women in society by railing against "the system" and saying things like "Love is beautiful. Black is beautiful. But I want it my way!" Perky Maggie (Currie from The Hangover series) encourages Gabriella to use her physical charms to get the upper hand on the men around her, a view shared more or less by Heather (top-billed Woodell from The Big Doll House), sporting a ridiculous platinum wig and horrific fashion sense, and the most charismatic of the bunch, Carla (Bey, star of the much-loved zombie favorite Sugar Hill).

What follows is a cavalcade of flashbacks, sex scenes, and monologues as Gabriella's own life experiences alternate with the new efforts of her friends to help her "get with it." That includes a visit to a seminar called "EROS: Eternal Rights of

Sexuality" (and a naked fantasy sequence in the Garden of Eden), including a sex ed demonstration by exploitation vet Linda York (Chain Gang Women), followed by romps on a yacht with a rich older man (Missile to the Moon's Clarke), bickering with a dimwitted surfer, and trippy music montages, plus shots of Gabriella's dad cruising for action in Hollywood (hi, Tower Records!). It's all insanely entertaining, though really nothing is more surprising than the film suddenly switching gears twenty minutes in for an appearance by a guy named Xavier (Lawrence) who explains how self-gratification ruled his life and he became gay after being molested by his creepy phys ed coach-- played by the film's producer, Jack Mattis!

As Code Red noted when they announced this title, the first nine-plus minutes of the film are in rough shape and had to be taken from a scratchy release print, but the remaining 70 or so from the original negative look terrific with very bold '70s colors and not much element damage at all. There's some minor motion blurring at times early on, but it's not much of a distraction. All in all, it's a nice presentation and a good way to experience a pretty fun party film. However, the co-feature spins things in a different direction with the chance to see Gabriella, Gabriella, the Mack Bing feature Marks used to extract all of the Gabriella flashback footage and much of the opening credits. Here we have Mills (this time credited as "Gabriella Caron") as a fresh-faced girl whose suburban parents have a far from ideal marriage. Dad goes out cruising at night and picks up girls with lines like "I can get to Vegas like that!," and if you keep your eyes peeled, you can spot Johnny Legend a couple of times as well as a bartender played by Alex Elliott, also seen in Brain of Blood and star of the infamous Sex Psycho. Meanwhile mom's off banging the pool boy to the strains of "The William Tell Overture," and Gabriella's taking time off from reading The Prophet to go to that EROS meeting seen in the earlier film (but with a few different twists here). Then it's time for more sunny sexual experimentation courtesy of rich swinger filmmaker mentors (Dandy's Roberts and Hidey), who want to document Gabriella's relationship with her boyfriend Stephan (Kersting), which is part of a larger project leading to that wild Xavier 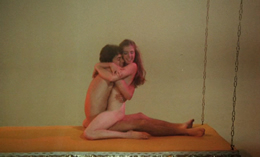 segue again. Things get stranger and more abstract on the way to the big finale, capped off with the entire cast and crew dancing naked around a pool over the closing credits.

Deemed uncommercial after being brought up to feature length with a mostly padded (and utterly plotless) final act, Gabriella, Gabriella is a bonkers counterculture curio with a pretty darn groovy soundtrack from Louis Yule Brown, Jerry Lewis's musical director, who also produced and financed the film. The final third is actually pretty astonishing, an "experimental" look at racial tension complete with young kids in combat gear and screaming racists; it wouldn't look a bit out of place in Goodbye Uncle Tom. Mainly it's of interest now as the source for all that footage in Class of '74 and as an early vehicle for Mills, who enlivened such films as A Touch of Sweden, The Suckers, and Sweet Georgia. What's interesting is that Gabriella, Gabriella is essentially a softcore sexploitation film loaded with nudity but dressed up as a social statement, while Class of '74 is much more mainstream; some of Mills' topless shots are carried over, but the skin quotient is toned down considerably in a bid for wider drive-in play. The ploy worked, and it went on to become an early hit for General Film Corporation, which went on to release films like The Candy Snatchers, The Centerfold Girls, and Detroit 9000.

The original Gabriella, Gabriella cut turned up without much fanfare as a DVD-R from Something Weird, but this DVD marks the first time both versions have been available together. Class of '74 is presented at 1.78:1 while Gabriella, Gabriella is 1.66:1 (and looks like it was shot on rougher film stock or 16mm), with the latter looking better than the older transfer that's been floating around. Extras include theatrical trailers for both titles (though the Gabriella, Gabriella one is basically a textless, wordless montage), plus bonus trailers for Just Before Dawn, Gold of the Amazon Women, The Girl Next Door, My Old Man's Place, The Folks at Red Wolf Inn, Splitz, and The Vampires' Night Orgy.