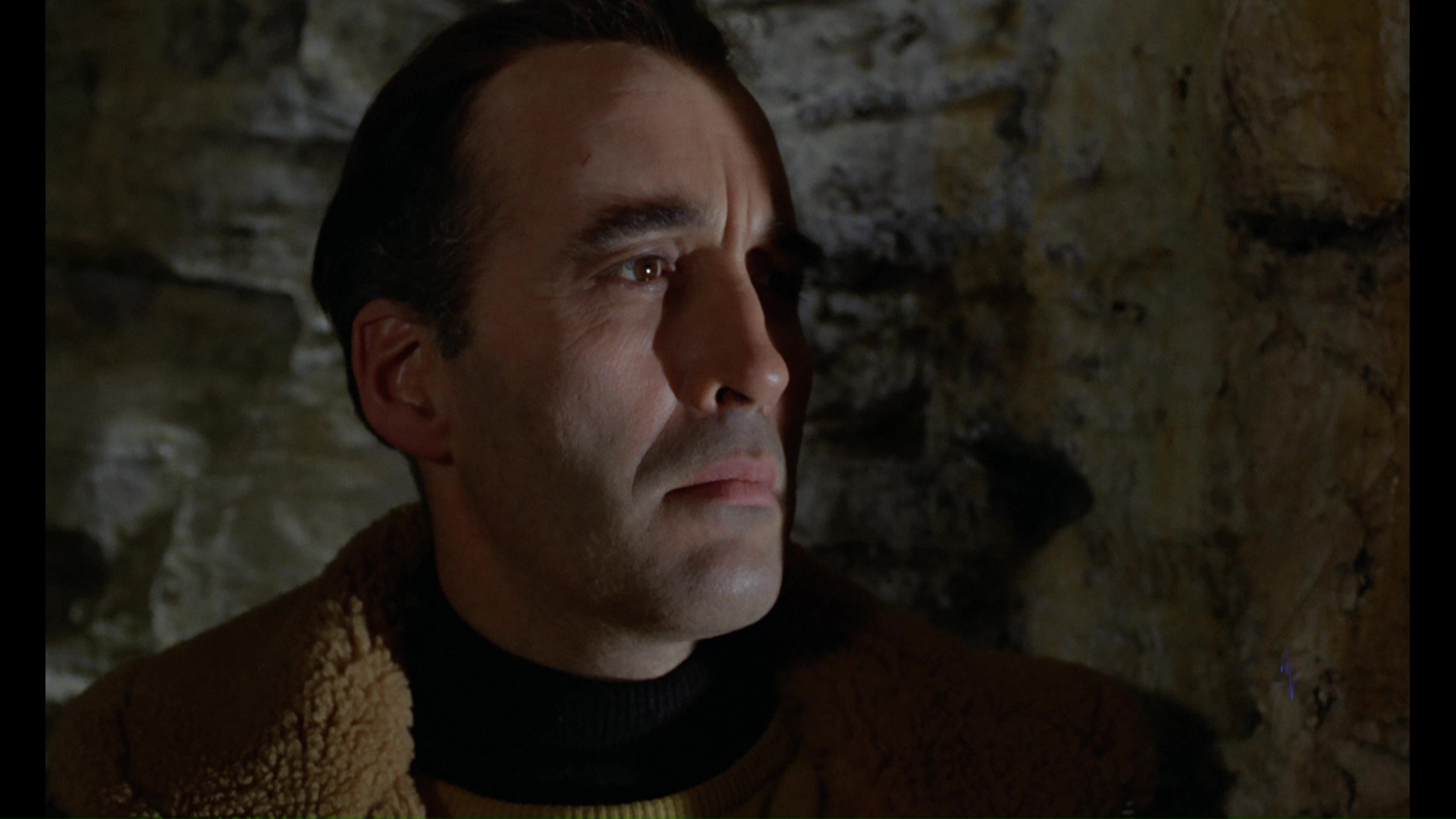 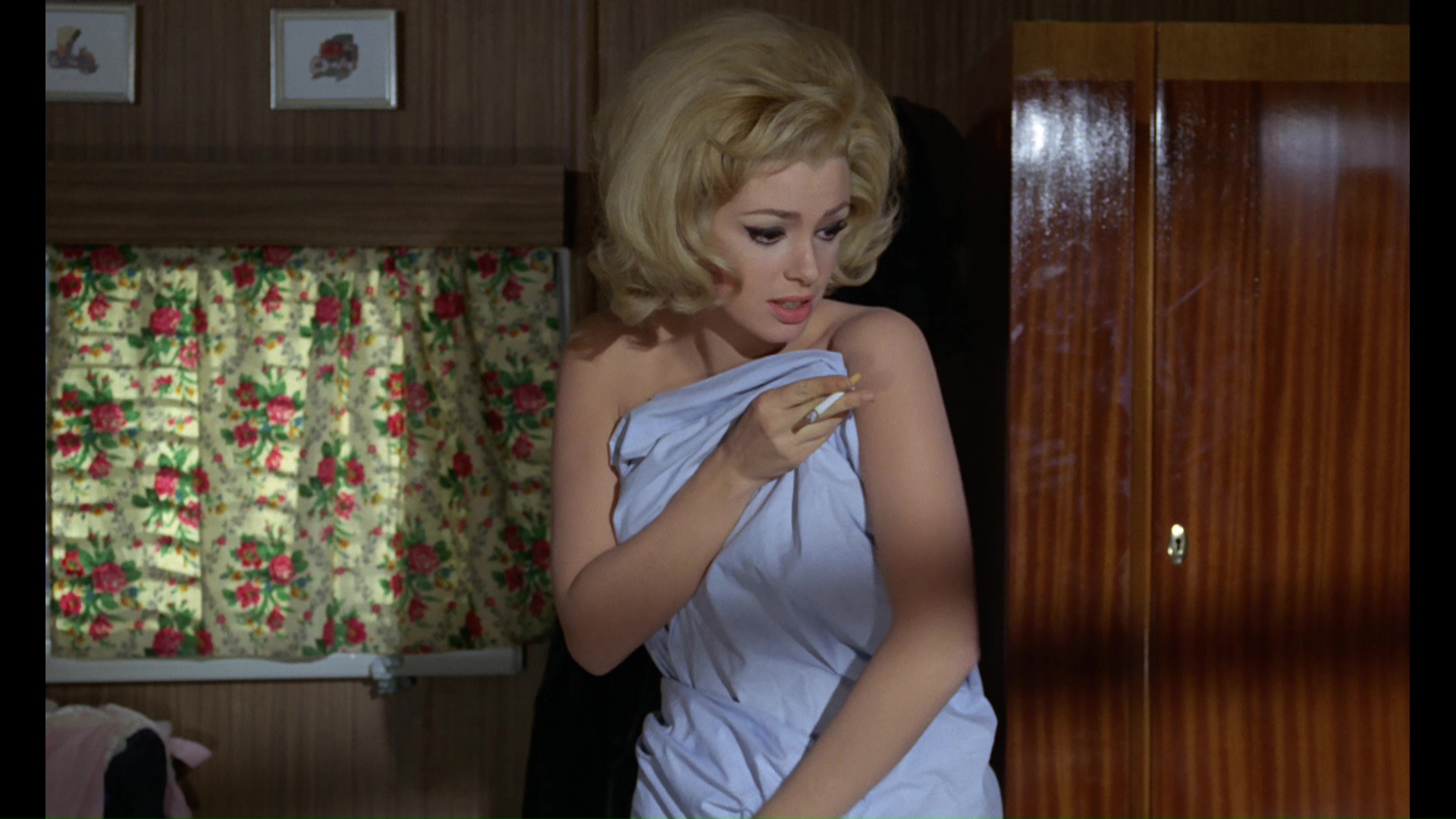 This double feature of Edgar Wallace adaptations captures a unique moment in time when jet-setting producer Harry Alan Towers was looking for a lucrative English-speaking market for the mystery writer’s thrillers, which were all the rage in Germany at the time. Dubbed releases of the Wallace films were proving to be popular as exports as well, so it seemed natural to bring Wallace back to his native country of England where a long string of hour-long programmers had also been made from his books. British and German money was poured into Towers-Wallace films, of which three ended up being made. (The first, Coast of Skeletons, is not included here but can be found on British DVD.)

Christopher Lee was no stranger to the Wallace series when he made Circus of Fear in 1966, having already appeared (dubbed) in the German productions of Secret of the Red Orchid and The Devil’s Daffodil. Also brought in for the film were some very familiar German actors from the Wallace series: Klaus Kinski (in a small part as one of the robbers), Heinz Drache, and perpetual comic relief Eddi Arent (cast a bit against type here). The plot is essentially split into two halves, starting off with a heist caper in which a quarter of a million pounds is swiped by a gang of bank robbers who hit a delivery van and kill off a guard in the process. The investigating police detective (Genn) 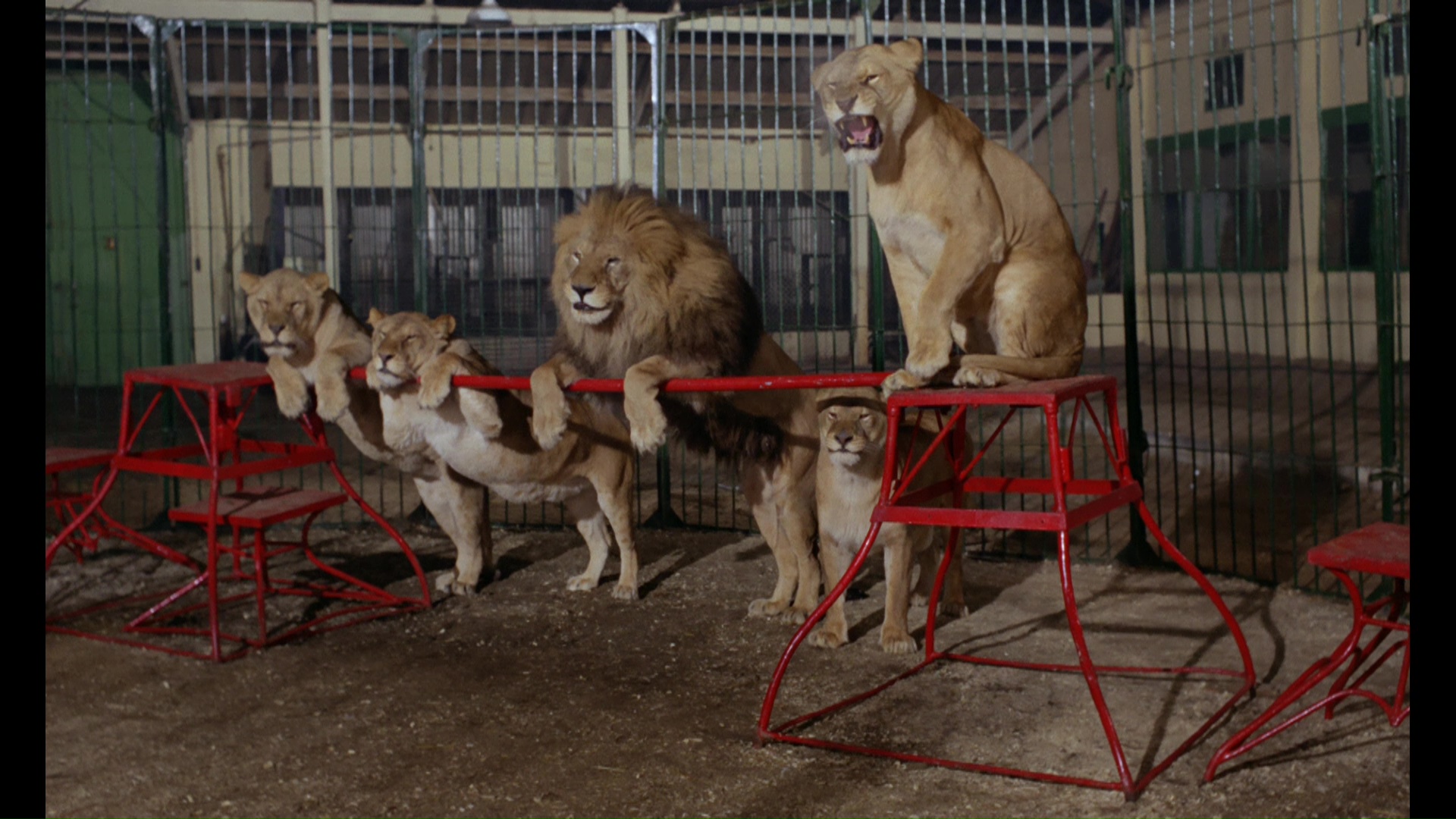 traces the loot and the getaway driver to the Barberini circus, where the multitude of suspects includes a facially-mauled lion tamer named Gregor (Lee) and a relentless main ringmaster, Carl (Drache). Soon people are getting bumped off one by one over the hidden money, and it’s up to the cops to unmask the culprit before he gets away for good.

Though shot in vivid color, this film was inexplicably shortened by over 20 minutes and released in black-and-white by AIP in the United States as Psycho-Circus. Fortunately the original uncut version was brought back to American eyes by Blue Underground on DVD, as part of a Christopher Lee boxed set (along with Blood of Fu Manchu, Castle of Fu Manchu, and The Bloody Judge) and as a standalone title. The German version pushed the Wallace angle much harder (a version 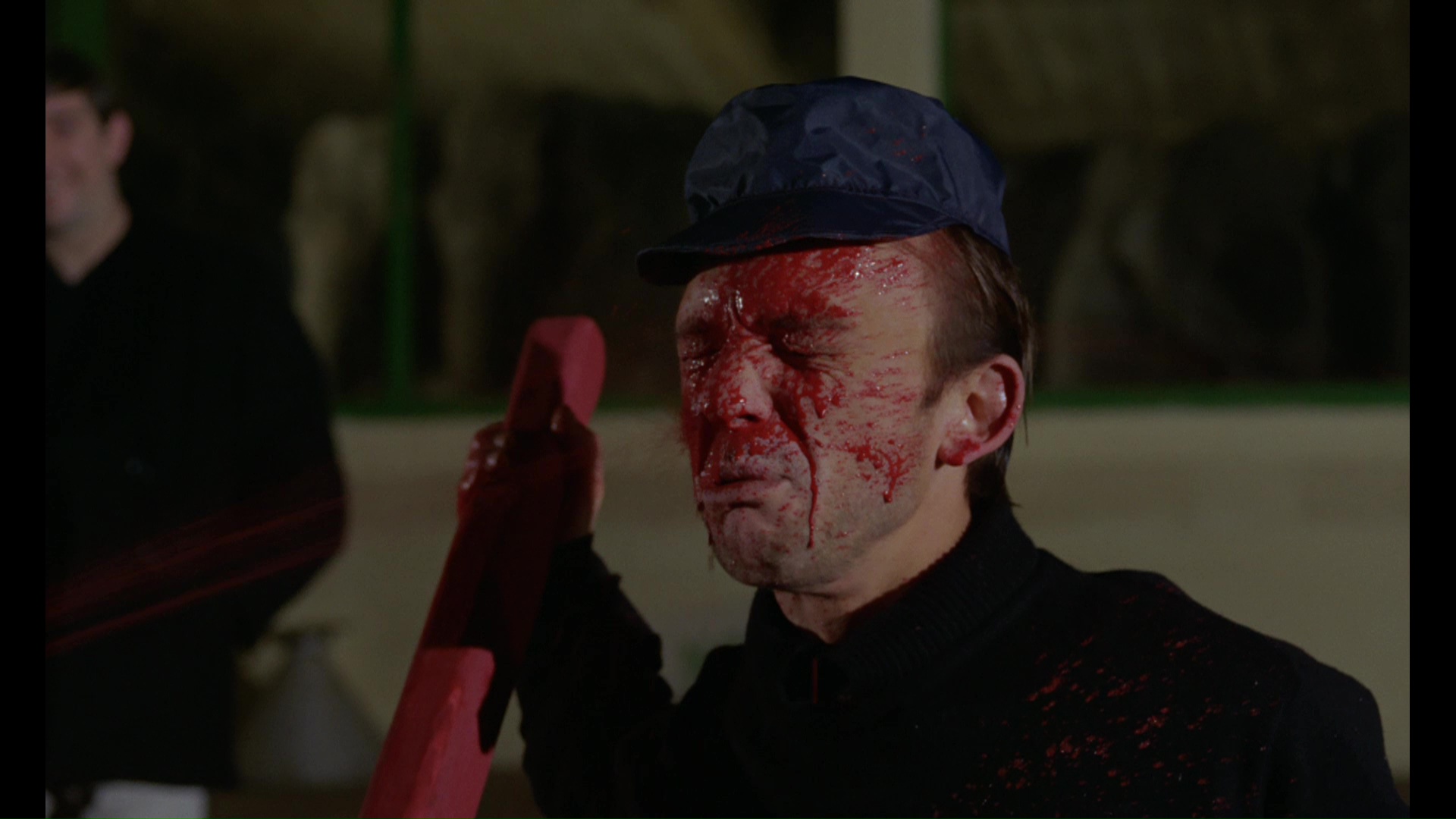 prepared by Werner Jacobs), though the plot still only bears a very vague resemblance to its source, the 1926 novel The Three Just Men (the fifth in a series). Lee is mostly wasted here with his face hidden behind a mask for much of the running time (though at least you get his distinctive voice), while eye candy is provided by Suzy Kendall (who was dating Dudley Moore at the time and had yet to do The Bird with the Crystal Plumage) as Lee’s niece and Jess Franco regular Margaret Lee, as the circus sexpot. Later to become a highly prolific and accomplished director of made-for-TV thrillers and horror films, John Llewellyn Moxey doesn’t go out of his way to bring much style to the proceedings (as opposed to his earlier work on Horror Hotel); the film mostly goes through the mystery paces, delivering a few pulpy thrills without straining itself or scaring anyone too badly. 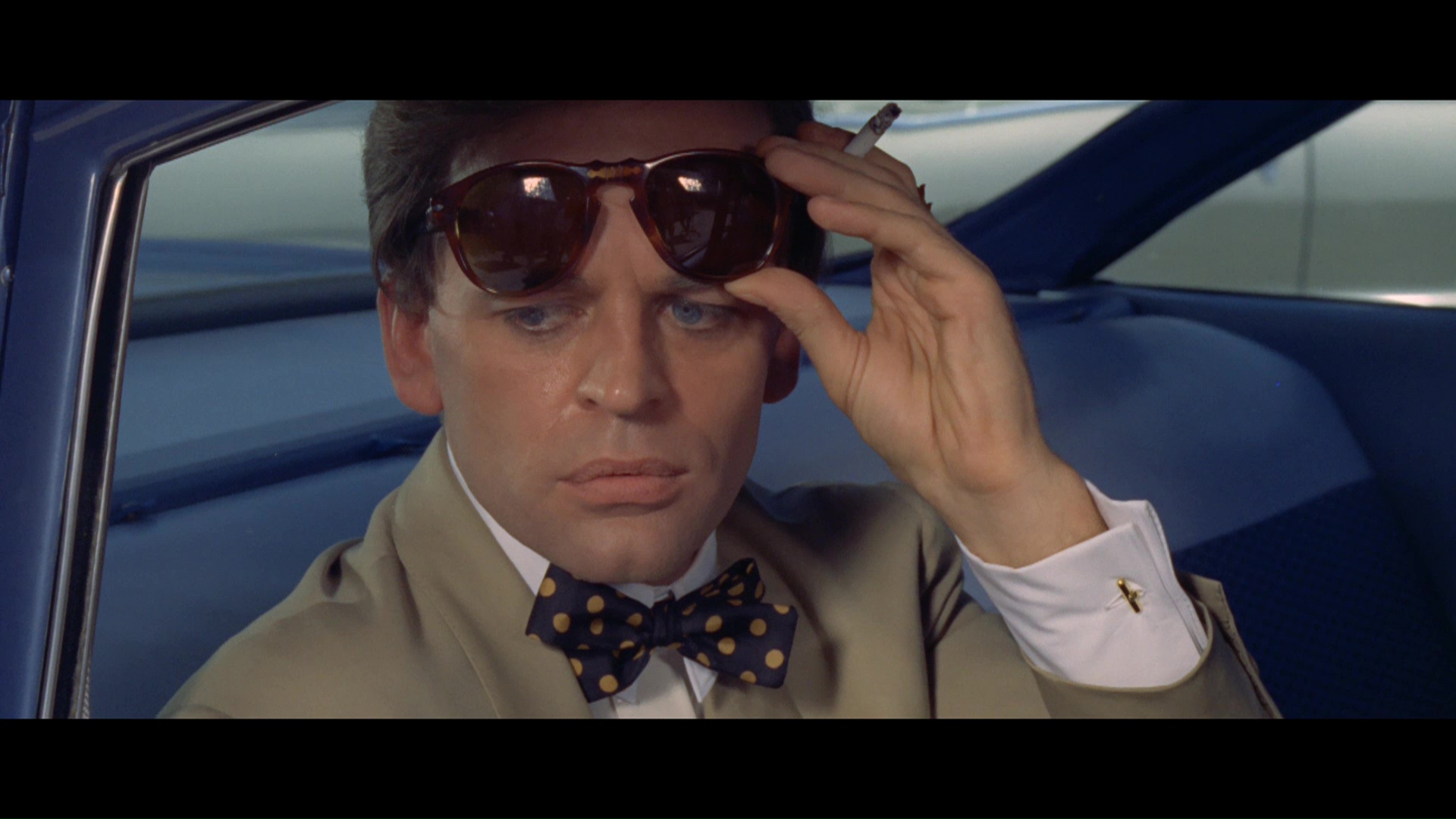 long way in 13 years. Detail sharpens up and colors are better defined, though the juxtaposition between soft stock footage and the main body of the film is more glaring than ever. It isn’t exactly a crisp or striking visual feast of a movie, but this gets the job done and marks the best it’s looking for home viewing (and most likely theatrical viewing in most markets). Extras carried over from the prior release include four trailers, with color and black-and-white options for its American and British releases, as well as a Moxey audio commentary with David Gregory about how the film came together under the “interesting” Towers’ guidance with two different countries calling the shots.

Sharing space on the same Blu-ray is the American video debut of Five Golden Dragons, another Towers-Wallace outing that feels a whole lot more like one of Towers’ “exotic” Fu Manchu and Sumaru films. Jeremy Summers, who also helmed House of 1,000 Dolls for Towers the same year, takes the reins here for a pedestrian story about five powerful, mysterious industrialists who convene regularly in Hong Kong to wreak havoc and plan to take over the world markets, or something to that effect. They all wear gold dragon masks, though we know pretty soon that four of them are guest stars Brian Donlevy, Dan Duryea, Christopher Lee, and George Raft, a pretty incredible combination even if they have little to do besides turning keys in locks. 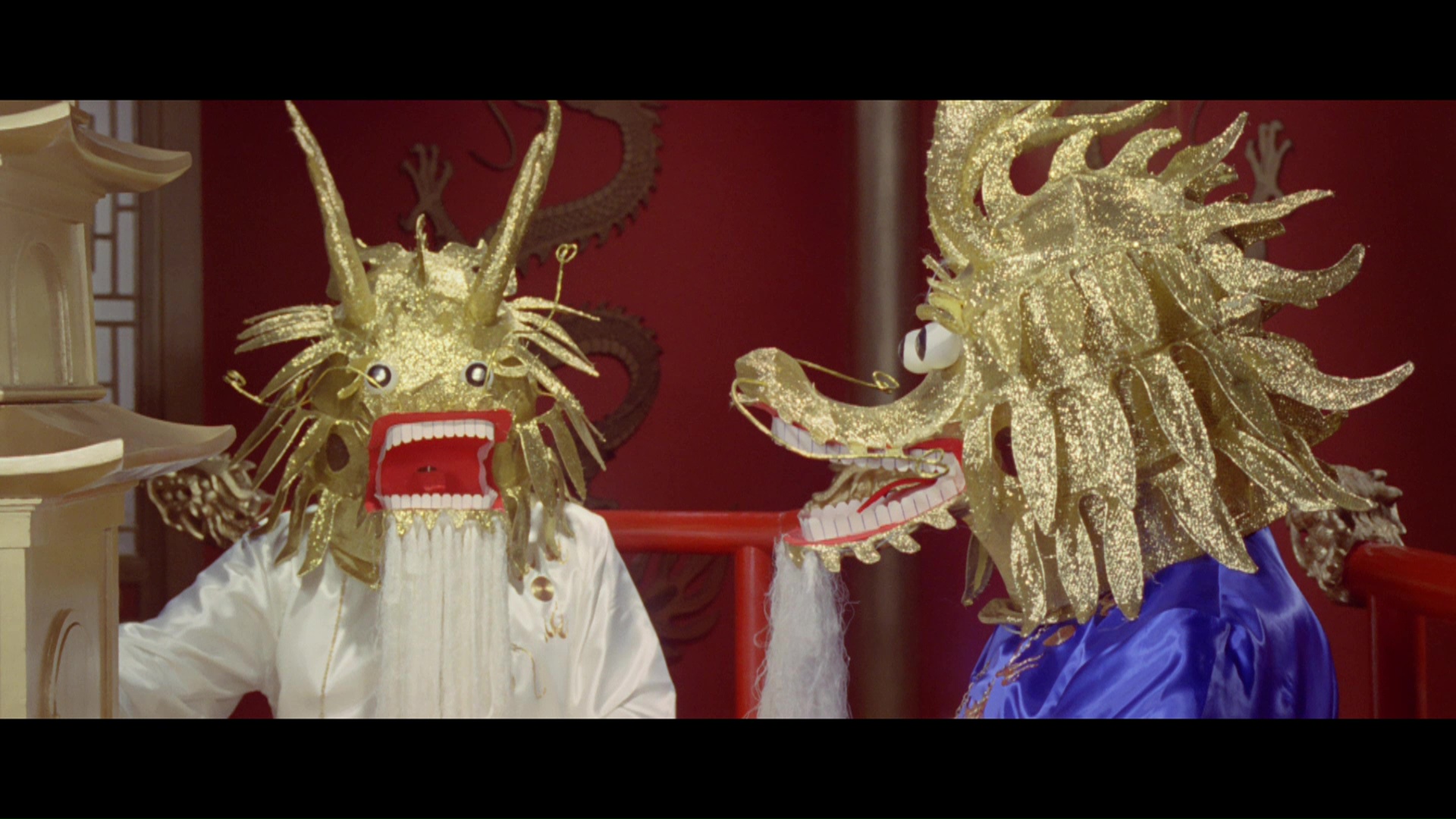 Into the mix comes ostensible good guy Bob Mitchell (Cummings, in his final big screen outing), a wisecracking American traveler who doesn’t seem too fazed even when everyone seem s to be trying to kill him and mysterious letters are being left for him by murder victims. Klaus Kinski pops up again as a secondary bad guy to remind you of the Edgar Wallace connection, 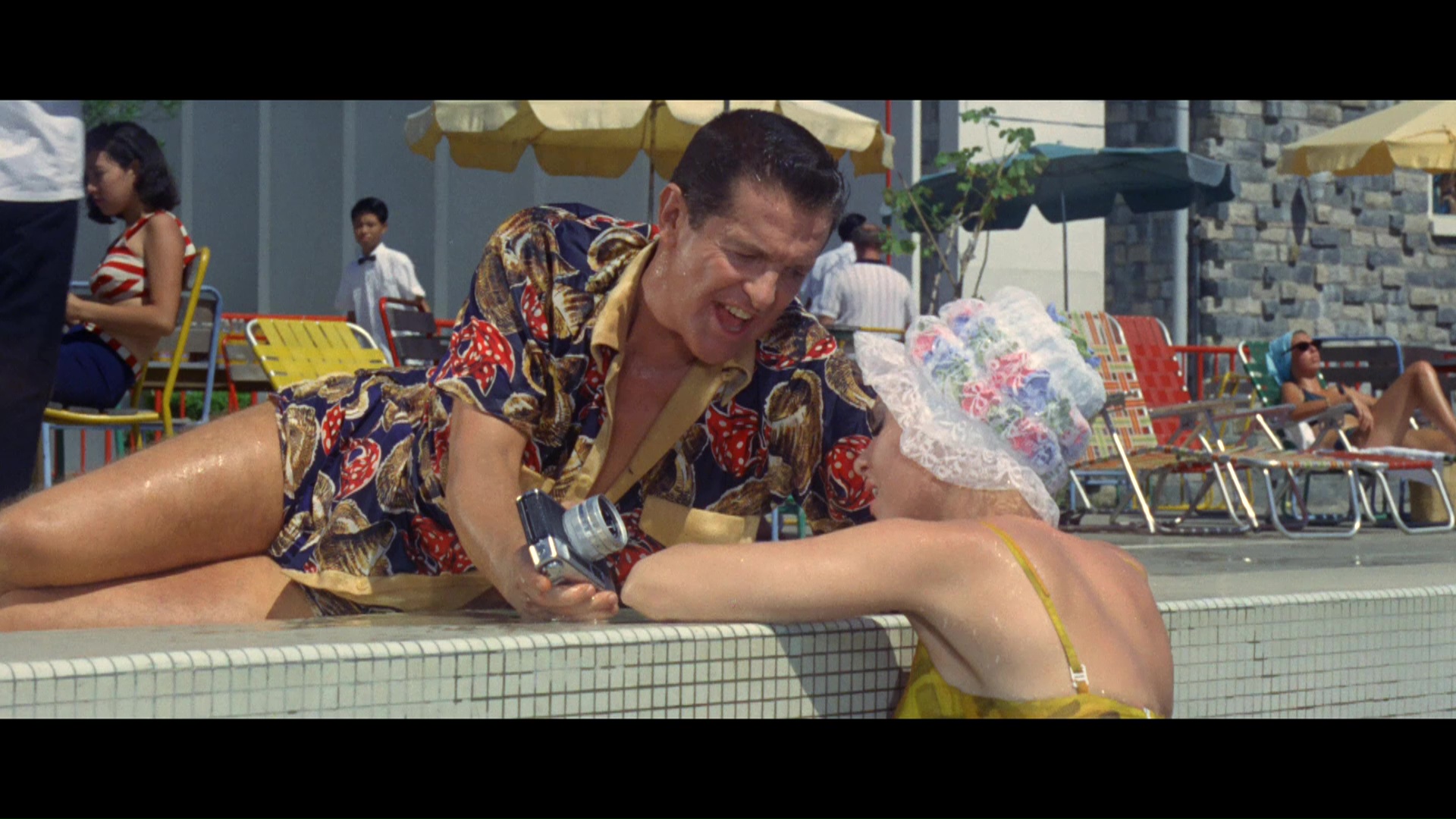 and this time all three women are Jess Franco and Towers regulars as Lee returns to join forces with Maria Perschy and Maria Rohm, all of whom have fashions that could have only been dreamed up in 1967.

Padded out with musical numbers and plentiful travelogue footage, this one was also chopped down for its American release but has remained intact on European home video over the years. The Blue Underground release is the best of the lot by virtue of its HD presentation, which is extremely colorful and often resembles the inside of a candy jar at a kitschy Chinese restaurant. It’s also even more obvious how long in the tooth Cummings is for his action hero role, though to be fair he doesn’t actually have to do a whole lot besides making jokes and grinning at his scantily dressed female companions. If you’ve seen Blue Underground’s other Towers releases in HD, you should know exactly what to expect.  A theatrical trailer is also included, and both films features galleries of stills and poster art.