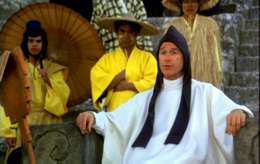 East meets West in no uncertain terms with circle of Iron, referred to by its creators (and the source print used for its current video release) under the more accurate title of The Silent Flute. The film has ensured a cult following for decades to come simply on the basis of its genesis as a pet project of Bruce Lee, who originally planned to play four roles in the Zen-oriented narrative with friend James Coburn coming on board as co-writer and star. (Steve McQueen was also approached but bailed before Lee reached superstardom in the early '70s.) Unfortunately Lee didn't live to see his vision come to the screen, but David Carradine acquired the rights and, recognizing it as a logical extension of his famous role in TV's Kung Fu, finally put it all together in 1978. The result is an odd beast to be sure, mixing hazy fantasy, philosophy, and martial arts showdowns into an oddly compelling stew that riveted the attention of channel surfers and adventurous video nuts for years. 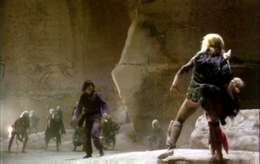 In a time and place "that never was and always will be," fluffy-haired fighter Cord (Cooper) is disqualified in combat by the powerful White Robe (McDowall), who hopes to find a fighter powerful enough to face a powerful opposing wizard, Zetan (Lee), who possessed a powerful Book of Enlightenment. Cord believes he's still the man for the job and sets off of his own accord, soon running into a colorful cast of characters including a blind mystic who use his flute as a fighting weapon, a musteacheoied sheik, the savage Monkey Man, and a black-clad figure (credited as Death), all played by Carradine. He also takes time out to bed down a beautiful maiden (Creer) before finally reaching his destination, where a very Zen surprise waits in store. 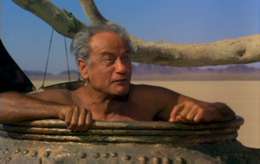 Shot in Israel with a dreamlike atmosphere reminiscent of classic fantasy novels (or maybe Lucio Fulci's Conquest with a bigger budget and cleaner camerawork), Circle of Iron will come seem either deeply profoundly or utterly silly depending on the viewer's mood (or perhaps a combination of both). Carradine certainly gets to stretch himself beyond his famous Kung Fu persona here with his multiple roles, though obviously his flute character is the most interesting and pivotal to the story. Though he only appears for a few minutes of screen time, Lee also offers a nicely judged performance which plays surprisingly against type (for reasons which shouldn't be revealed here, though it's worth mentioning that the final twist was copied wholesale by Kung Fu Panda, of all films). However, perhaps the most memorable performance is delivered by Eli Wallach, again in essentially an extended cameo as "Man in Oil," whose plan to achieve a higher state of enlightenment is highly unusual, to say the least. A friend of Carradine's, Cooper suffers in comparison to his co-stars (and his wooly hairdo doesn't do him any favors either); he seems more like a bemused, over-the-hill surfer than a dedicated seeker of truth. However, in an oddball drive-in sort of way, his performance works in th same way as other inexplicably modern leading men in films like The Sword and Sorcerer. 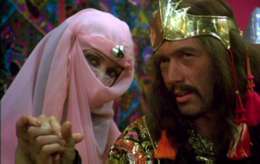 Blue Underground has released Circle of Iron in two DVD editions, first as a modest single-disc edition and then a tricked-out, two-disc special edition. Their subsequent Blu-Ray carries over all of the extras apart from a stills gallery and a pdf of the original screenplay by Lee, Coburn and Sterling Silliphant, and the real clincher for the hi-def option is the obvious huge increase in clarity and fidelity in the transfer of the feature itself. While the standard def DVD struggled with the earthy tones of the film and betrayed some signs of edge enhancement to compensate for the tricky visuals, the Blu-Ray has no such issues and looks pleasingly film-like. The amount of film grain looks about right, too, appearing just enough in darker scenes and the opticals used for the credits to still look like a real movie. Very nice all around. While the DVDs offer the usual DTS and Dolby Digital EX options, the Blu-Ray also trumps them with subtle but immersive DTS-HD and Dolby TruHD mixes along with the prior Dolby Digital tracks and optional subtiles in English, Spanish or French. Extras include a delightful video interview ("Playing the Silent Flute") with the late Carradine (who mimics his characters on-camera and offers his memories of the apparently MIA Cooper), a robust audio commentary with director Richard Moore, interviews with co-producer Paul Maslansky and marital arts coordinator Joe Lewis, an audio interview with silliphant about working with Lee and Coburn, the Ameican and international trailers using both titles, and TV spots. Apart from the Carradine interviw, the Moore commentary (moderated by David Gregory) is the most substantial of the bonuses, talking about the path of the film on its way to completion and the stories behind the extremely color cast of players involved. Certainly one of the most unique martial arts films from the genre's initial heyday around the world, Circle of Iron offers much more than just mindless fight scenes and holds up as a fascinating mixture of spirituality and body blows.