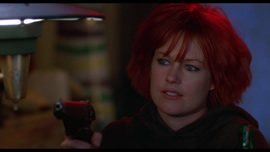 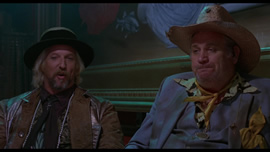 A cult film that never quite seemed to find its cult, Cherry 2000 was the debut film for Steve De Jarnatt, a co-writer of Strange Brew who drew some attention with his flashy direction for the pilot episode of the '80s TV revival of Alfred Hitchcock Presents. Sort of an oddball mixture of Mad Max and Blade Runner with a heavy '80s pop sensibility, this was supposed to be a big calling card for De Jarnatt with the full support of Orion Pictures, but instead it barely drew any viewers at all in theaters and only gradually built up word of mouth through frequent afternoon cable airings. De Jarnatt went on to helm an even better film the following year, the sleeper masterpiece Miracle Mile, before shuffling off to a career on TV, but the two films he left behind are still diamonds drawing in new generations of viewers.

Hot off her starmaking turns in Body Double and Something Wild, a scarlet-haired Melanie Griffith makes a strong impression here as E. Johnson, a gun-toting, Mustang-driving mercenary tracker hired by rich businessman Sam Treadwell (Andrews) to help him locate a replacement android for his female companion, Cherry 2000 (Gidley), who's irreparably glitched out. Together they have to infiltrate the dangerous area known as the Zone to retrieve another now-rare model from the one remaining factory nearby that may have one, but in the process they come across a motley crew of colorful characters including the villainous Lester (Trancers' Thomerson).

The insane array of character actors on display here should be enough to solidify this film's cinematic cachet with everyone from Robert Z'Dar to Laurence (then Larry) Fishburne turning up. 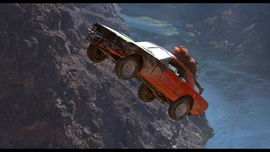 Despite the cheeky nature of the film's title, the sexual aspects are largely down played apart from an early nightclub sequence; the PG-13 rating is really 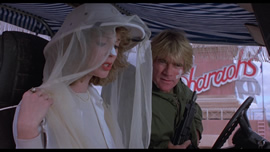 more due to some violent action sequences, which are handled with a reasonable amount of skill. However, it's really the interplay between Griffith and Andrews that forms the heart of the film; they're an appealing pair, and the whole thing is ably supported by its most valuable asset, a terrific score by late composer Basil Poledouris (Conan the Barbarian, The Hunt for Red October). There's a good reason it's been reissued numerous times and remains one of his most popular works to this day.

MGM has kept the film in circulation regularly on VHS and DVD over the years (following its stint on VHS shelves from HBO), and in 2015, a US Blu-ray from Kino Lorber was followed soon after by a UK edition from Signal One. They're derived from the same source, an excellent HD master provided by MGM with a natural, detailed appearance similar to their other '80s catalog work, though as with other Kino/Signal One crossovers, the British one features slightly deeper black levels and a marginally more robust bit rate (as well as a slightly punchier LPCM stereo track compared to the DTS-HD MA one on the Kino). You'll come out a winner either way though as the differences are minor, and apart from an additional gallery of stills and lobby cards on the UK release, the extras are identical: a detailed and often affectionate De Jarnatt commentary track (dovetailing nicely with his chat track on Kino Lorber's release of Miracle Mile, which is essential), a 13-minute video interview with Thomerson about his enjoyment playing a bad guy and doing some fun gun and stunt work, a 6-minute vintage promo featurette with some behind the scenes footage (designed for cable promotion), and the original trailer.