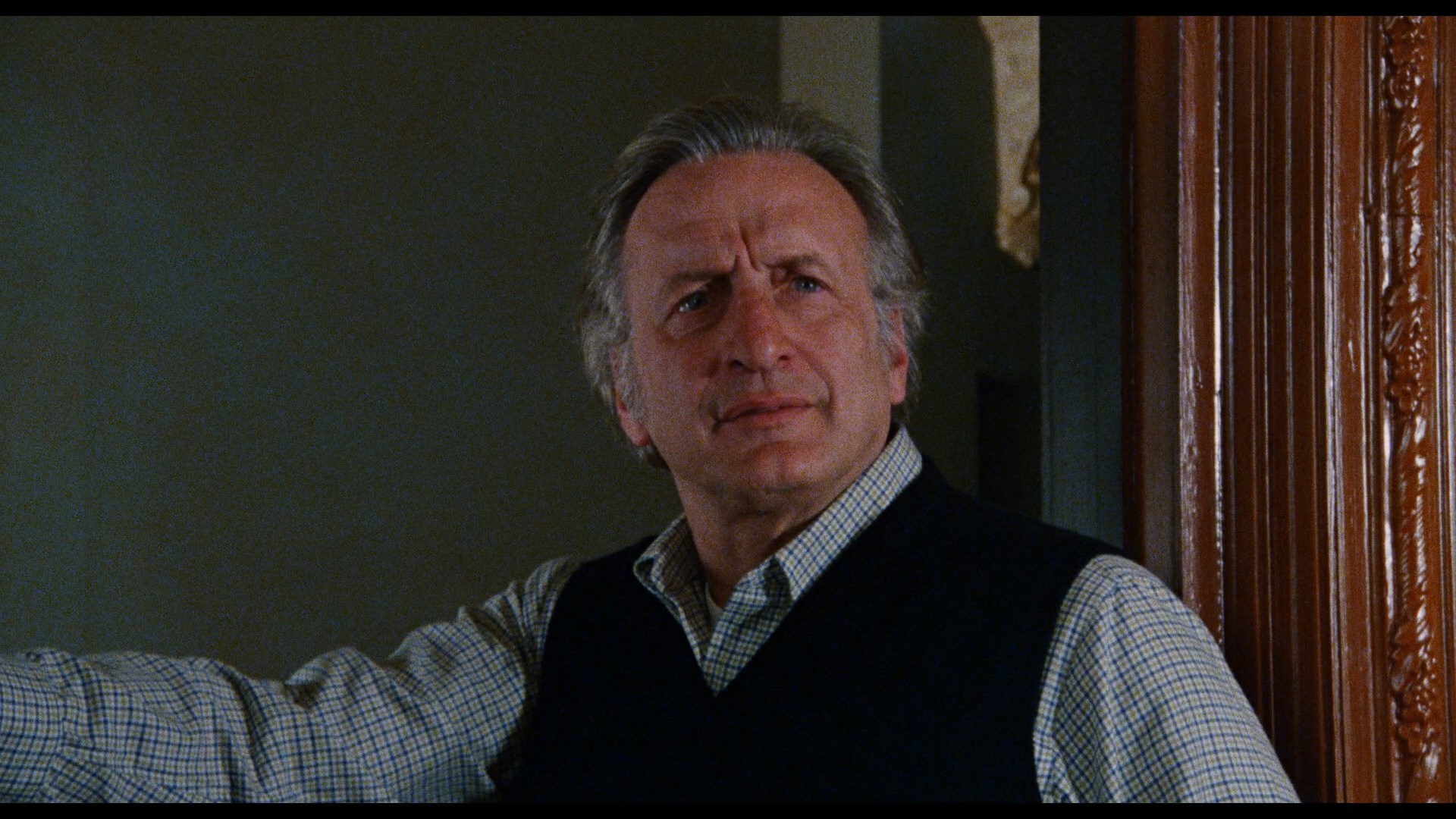 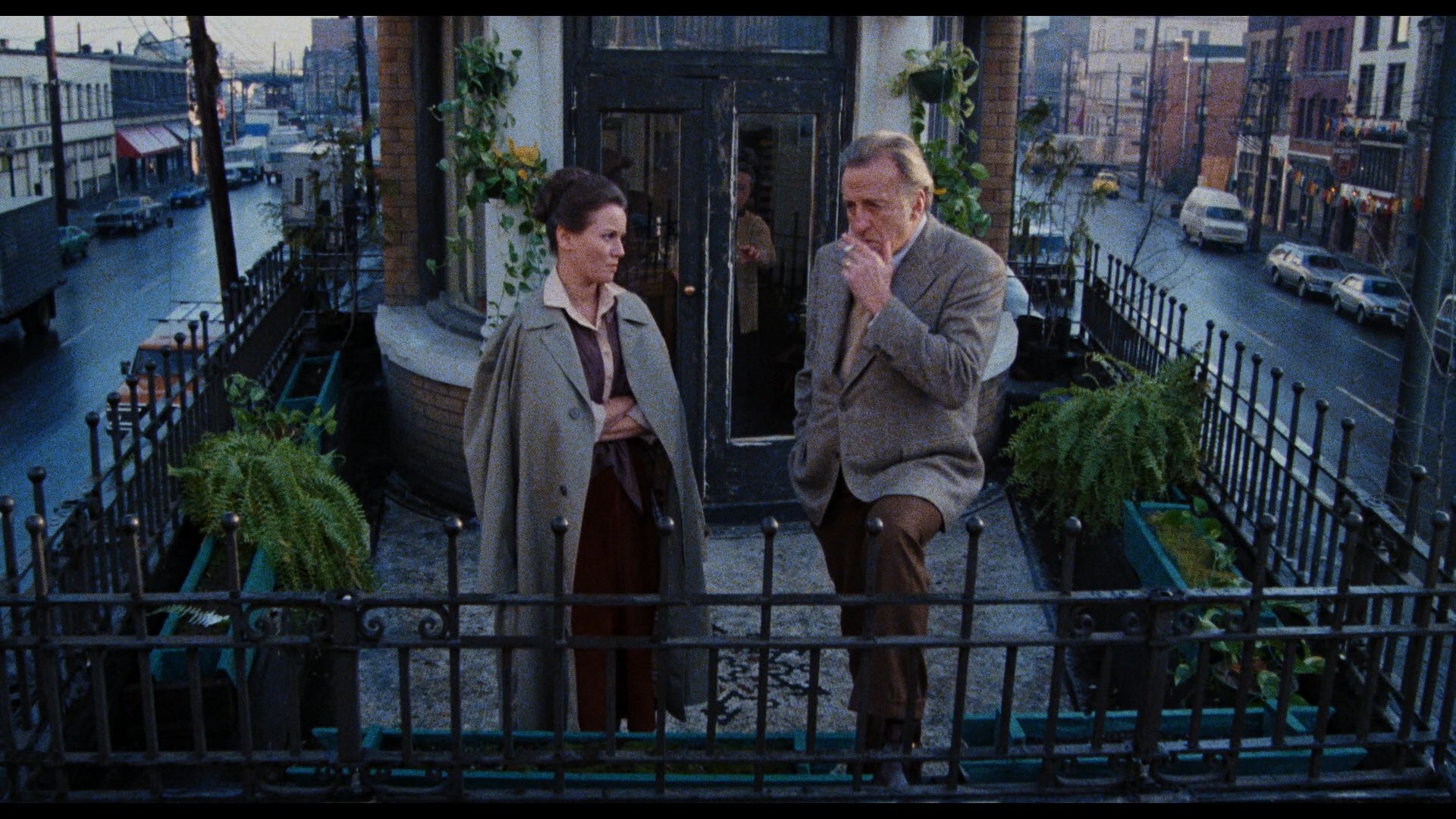 the best ghost story ever filmed, the Canadian production The Changeling stood out in 1980 as a restrained, elegant, and utterly terrifying bit of counter-programming just as slasher films were beginning their horror box office domination. The subject matter harks back to the great turn of the century English ghost stories that used suggestion and elegant plotting to chill the reader, and thanks to its earnest performances and numerous hair raising sequences, the film remains as potent as ever today.

A typically excellent George C. Scott stars as John Russell, a classical composer and university instructor who rents a sprawling mansion from the local historical society while he works on his latest opus. Still recovering from the shocking death of his wife and child, he doesn't quite know how to take it when the house shows signs of being haunted. Loud pounding noises emanate from within the walls every night, windows mysteriously shatter, and the discovery of a hidden room unearths a music box with a chilling connection to John's latest piece. With the help of society worker Claire (Van Devere, Scott's real-life wife), John arranges an unusual seance which finally allows direct contact with the spirit inside the house. The dark secrets ultimately lead John to a prominent senator (Douglas) and a bloodcurdling final act.

Along with the excellent The Ruling Class, this film marks a high point for erratic Hungarian director Peter Medak. Here he displays style to burn with some dazzling mobile cinematography and a fine eye for atmospheric detail. The simple image of a cobweb-covered child's wheelchair becomes an unforgettably sinister 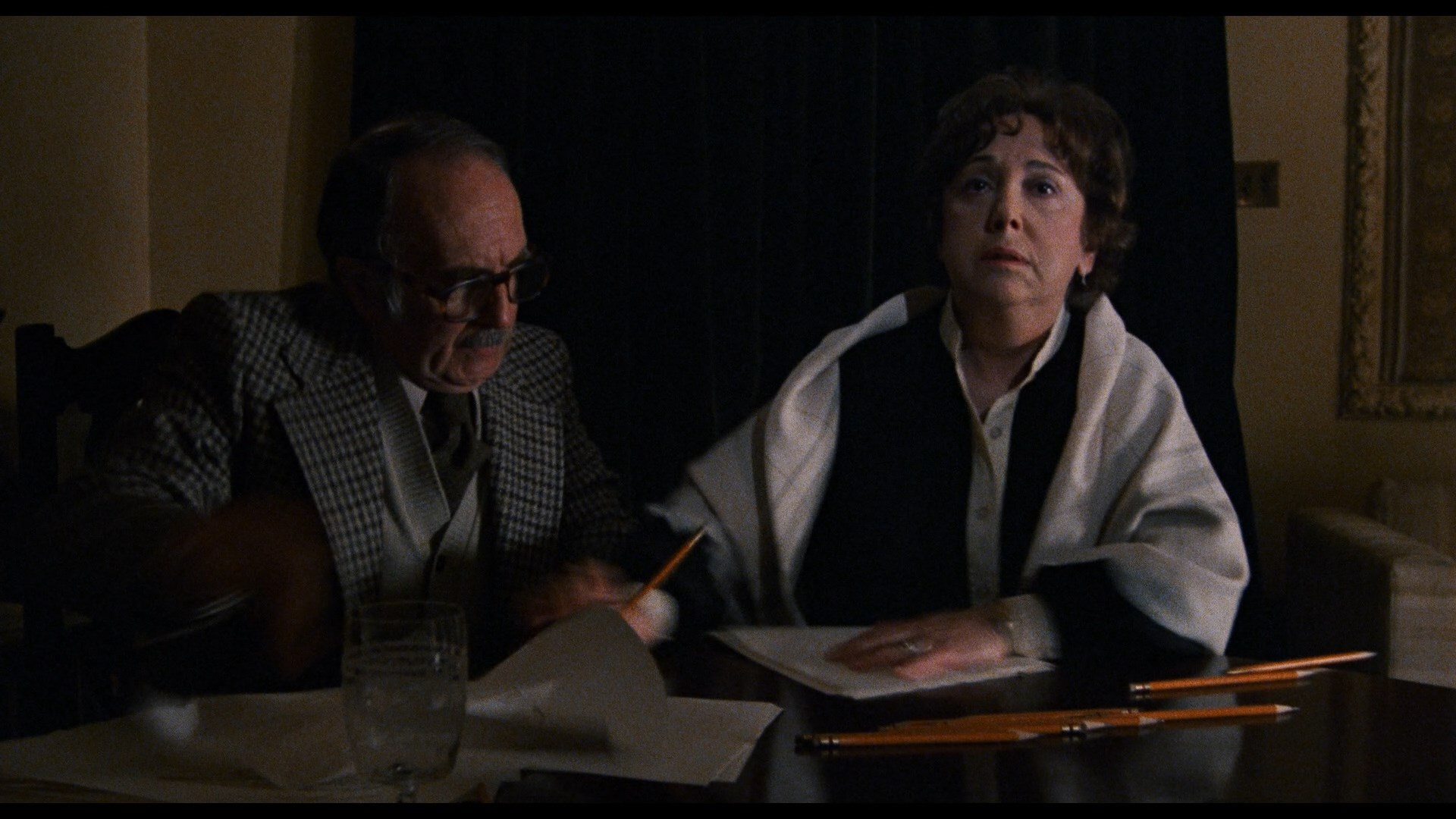 apparition, and even something as simple as a piano key striking by itself can cause a jolt. 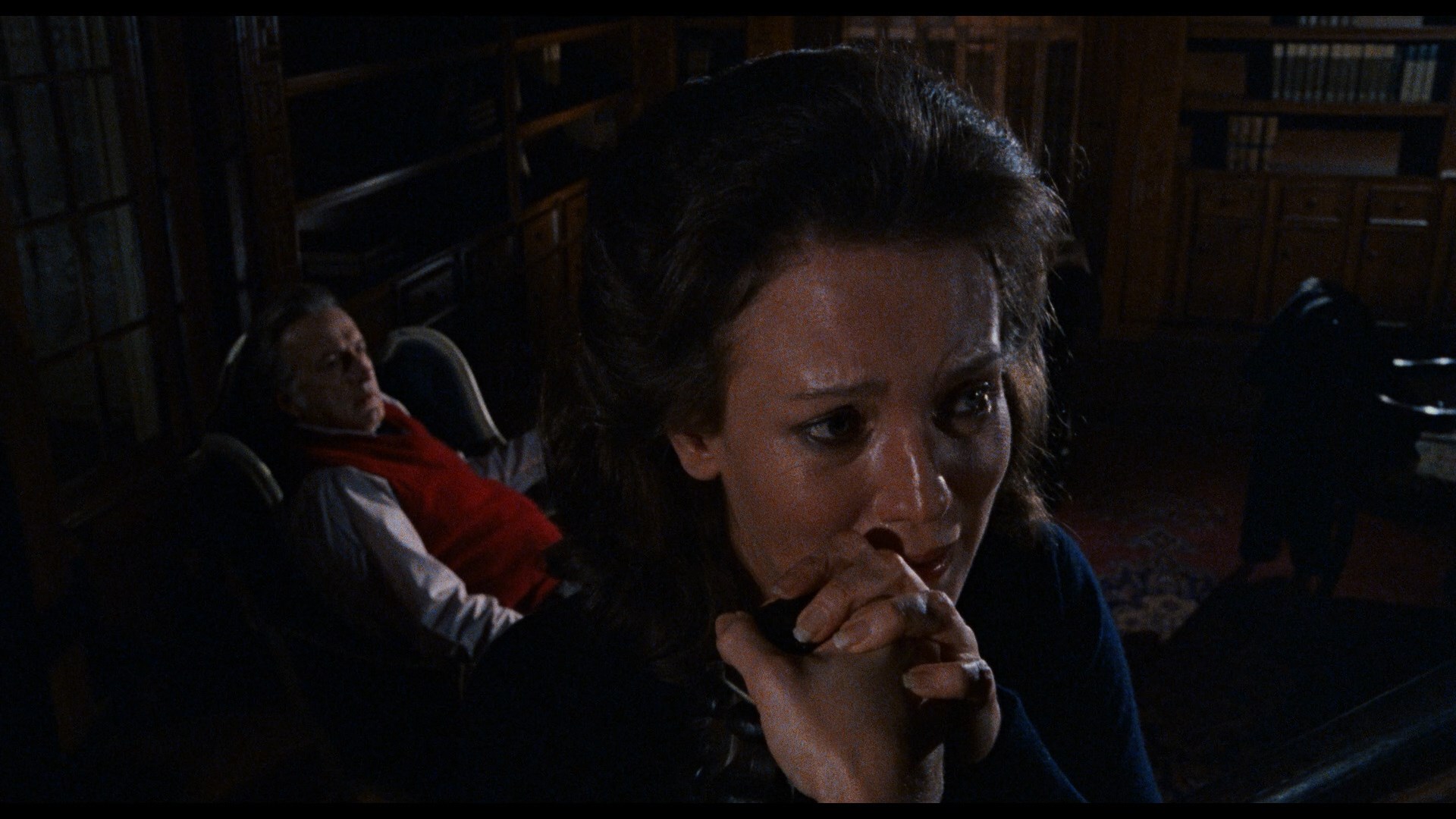 Then of course there's "the ball"... but viewers will be better off discovering that one for themselves. It's also worth noting that the R rating slapped on this film back in 1980 seemed a bit much even then, probably handed out for general intensity and the subject matter of a murdered child; it would almost certainly skate by with a PG-13 today and

Despite claims on some posters that this film was shot in scope, The Changeling was filmed hard-matted at 1.85:1 and suffered terribly on video for decades. The drab, nearly unwatchable laserdisc from Vestron and the VHS cassettes from HBO back in the early days conveyed none of the rich, burnished textures in the house or the vibrant, eerie blues of many scenes which take place at twilight. The HBO DVD in 2000 finally got in the ballpark with much more robust colors and deeper blacks than before, plus a pleasant surround mix filled with nice ambient effects. No extras are present on that one apart from some cast and crew bios. After that the film went out of commission in the U.S. for many years, though the same transfer ended up in other countries like Australia and, by the look of it, was sourced for a pitiful 2016 Japanese Blu-ray best avoided entirely.

In 2017, Severin Films announced plans to release the newly remastered film on Blu-ray and set many horror fans' heart fluttering. That promise came to pass in 2018 with a Blu-ray 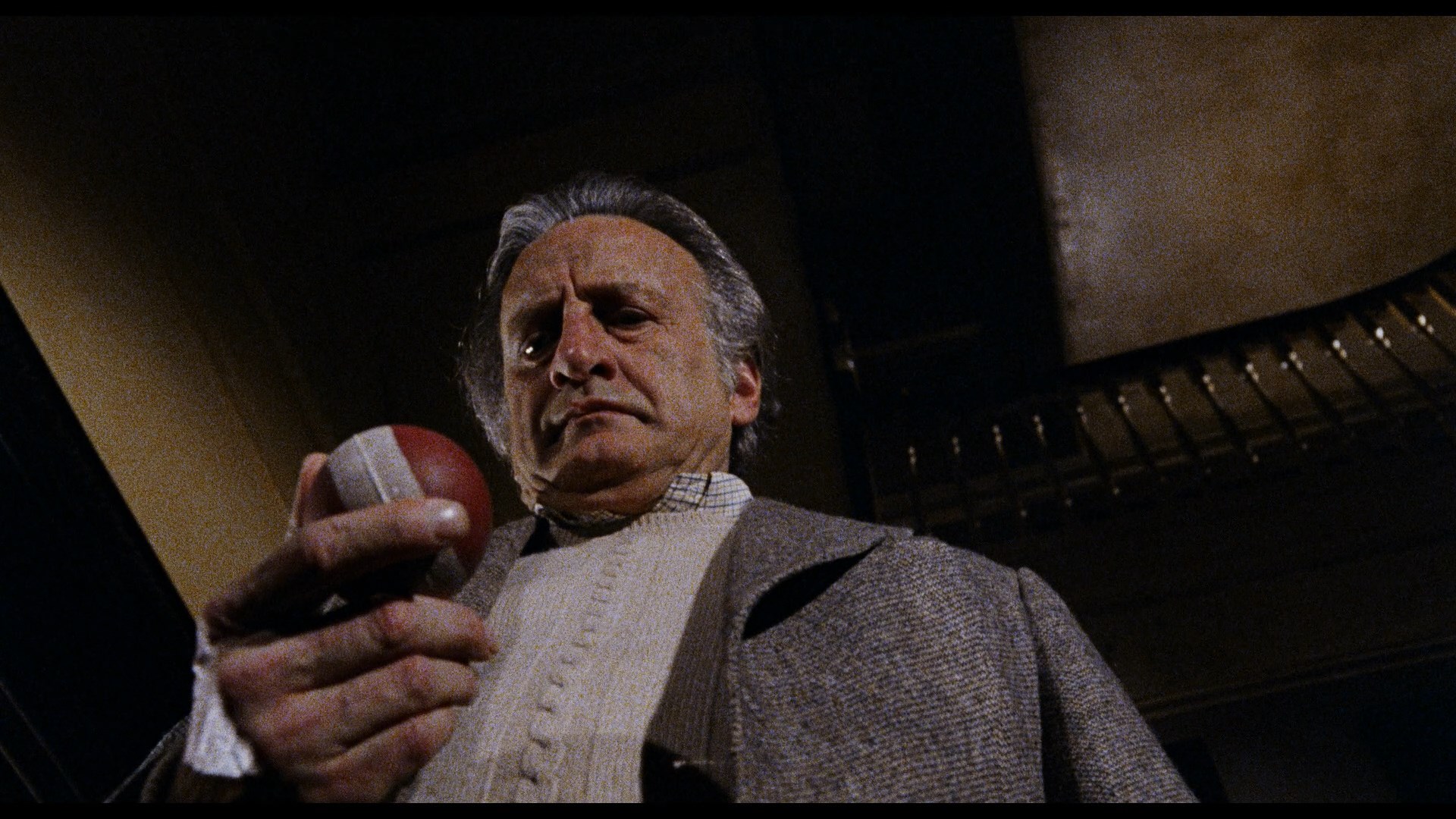 available in a standard edition, a limited slipcase edition with a CD soundtrack (the same as the first disc in Percepto's essential release showcasing the superb score by Ken Wannberg, Rick Wilkins and Howard Blake), and a bundle featuring the limited Blu-ray, an enamel pin, and a ball that's tailor made for spicing up your next screening with friends. The Blu-ray itself is mirrored in the 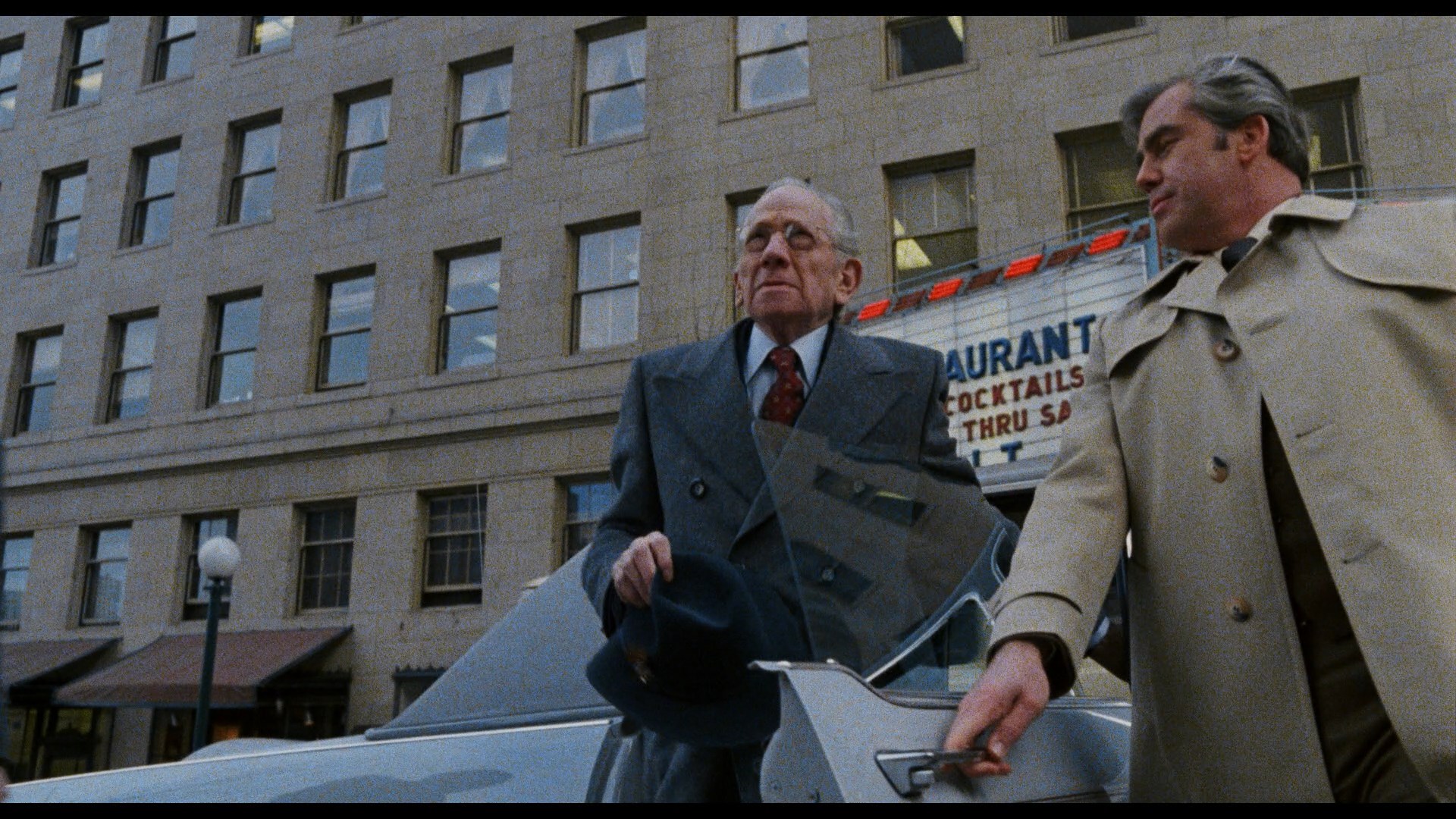 U.K. with a nearly simultaneous release featuring the same video extras (minus Severin's still gallery) and taken from the same transfer of the film itself, plus an exclusive bound booklet with new liner notes by Kevin Lyons, production notes and an archival interview. (The cover art by Christopher Shy is pretty killer, too.) The transfer itself looks great and should come as a major relief to fans of the film; derived from an interpositive, it's much more detailed than ever before with fine grain still intact (essential for darker scenes in particular) and those rich, earthy colors now looking even better than ever. An English DTS-HD MA 5.1 track is subtle but immersive with some nice atmospheric effects throughout, and optional English subtitles are provided; a 2.0 option is also provided that ports over the usual theatrical mix we know and love, and it's still wonderfully manipulative. Additional audio options (Dolby Digital) are provided in Spanish, Italian, and German. It's worth noting that the initial pressing had a handful of snippets of dialogue and sound effects missing from the 5.1 track of the Severin release and some sync issues on both (not the UK, which at least partially fixed the major issues), which was adjusted for a corrected pressing that was taken from an unrestored master with element damage and then substituted with a third. Got all that?

An audio commentary with Medak and (via Skype or phone) producer Joel B. Michaels is moderated by Severin's David Gregory, and it's a very upbeat, nostalgic discussion with frequent remarks about the fortunate circumstances of the shoot. Though he was preceded by a notorious reputation for being difficult, Scott was apparently a dream to work with here (along with the rest of the cast), and other topics include the construction of a set when the original real house interior proved insufficient, the other films that have pulled elements from this one (calling out The Others, Session 9and What Lies Beneath but recorded before the release of the equally indebted Hereditary), 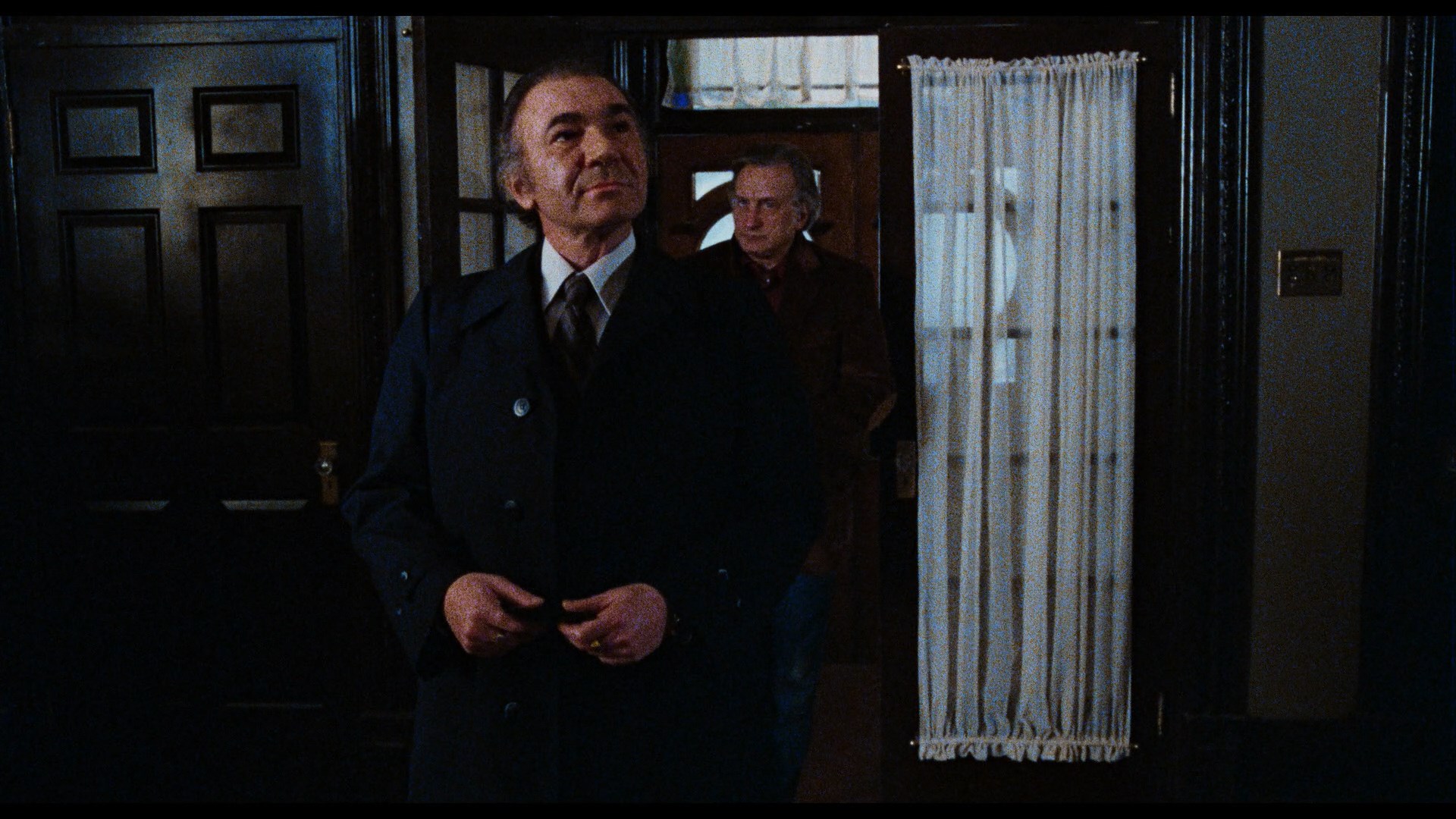 and the deliberate attempts to go against expected horror conventions right down to the main character and his casting. "The House On Cheesman Park: 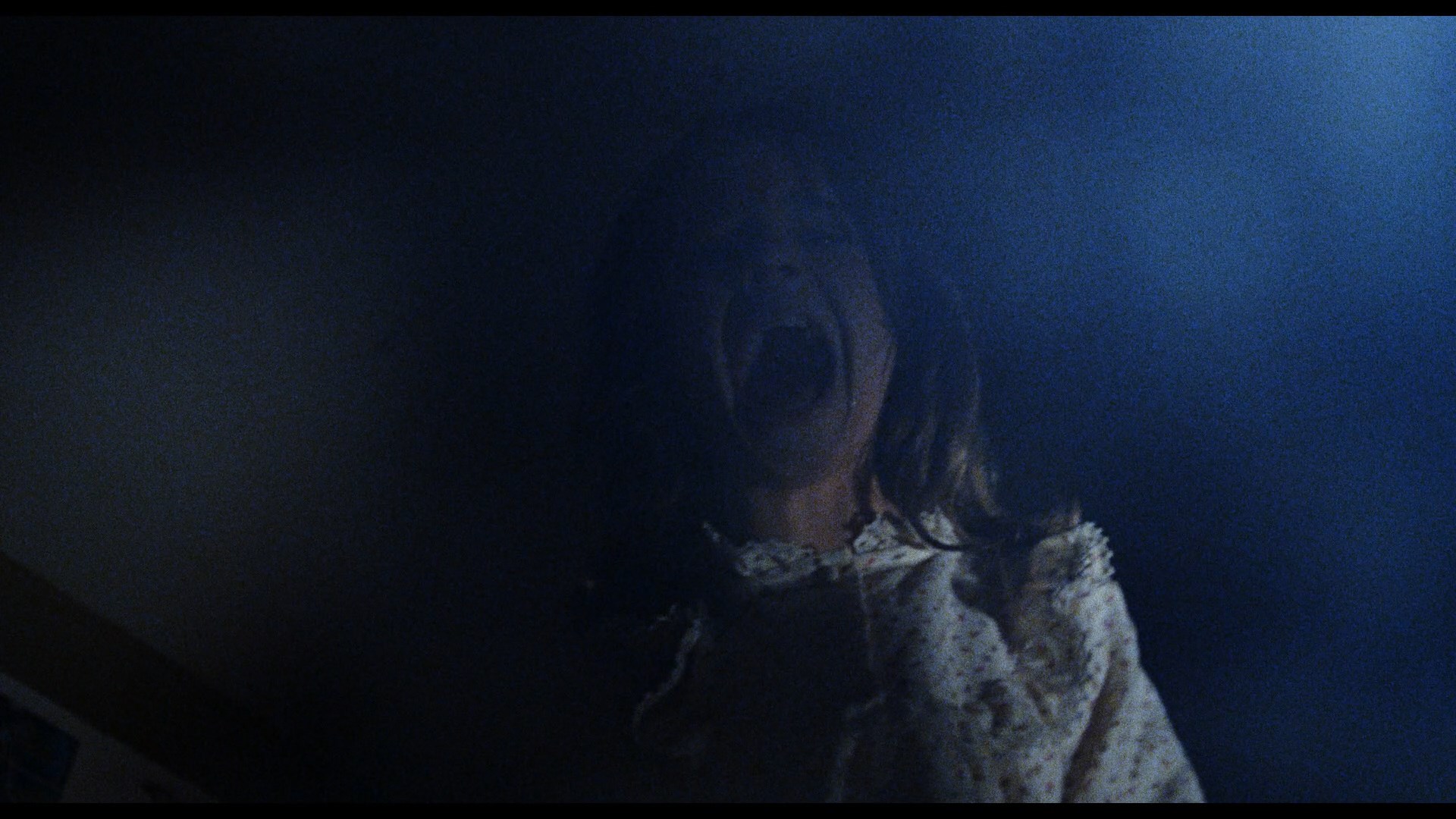 The Haunting True Story Of The Changeling" (17m32s) with very colorful author and historian Dr. Phil Goodstein is a particularly macabre account of how a massive attempt to move thousands of bodies for a park ended up in a mass haunting involving a house that inspired the backstory for the film. Just for fun, try a drinking game by taking one shot every time he says "bounce." In "The Music Of The Changeling" (8m58s), Wannberg (who's credited as "music arranger" for complicated reasons) offers his own rendition of the main theme on the piano and touches on his long working relationship with John Williams before explaining the process of scoring this film, with the music box theme (written by Blake) done before shooting for atmospheric use and his work coming into play right in the thick of it. Next up is art director Reuben Freed in "Building the House of Horror" (10m54s), explaining his move from South Africa to become a documentarian that turned into a very different gig including the hunt for a real house exterior that would work for this film and his endless admiration for production designer Trevor Williams. "Mick Garris on The Changeling" (5m30s) features the Masters of Horror creator chatting about his enthusiasm for Medak's technique and his eventual grisly work on "The Washingtonians," while "The Psychotronic Tourist: The Changeling" (16m2s) has House of Psychotic Women author Kier-La Janisse (in a great Mott the Hoople shirt), Michael Gingold, Ted Geoghegan, Clinton McClung, and Ryan Nicholson guiding you through a very thorough and lively overview of the film's locations from the numerous Vancouver locales to Seattle's Lake View Cemetery and 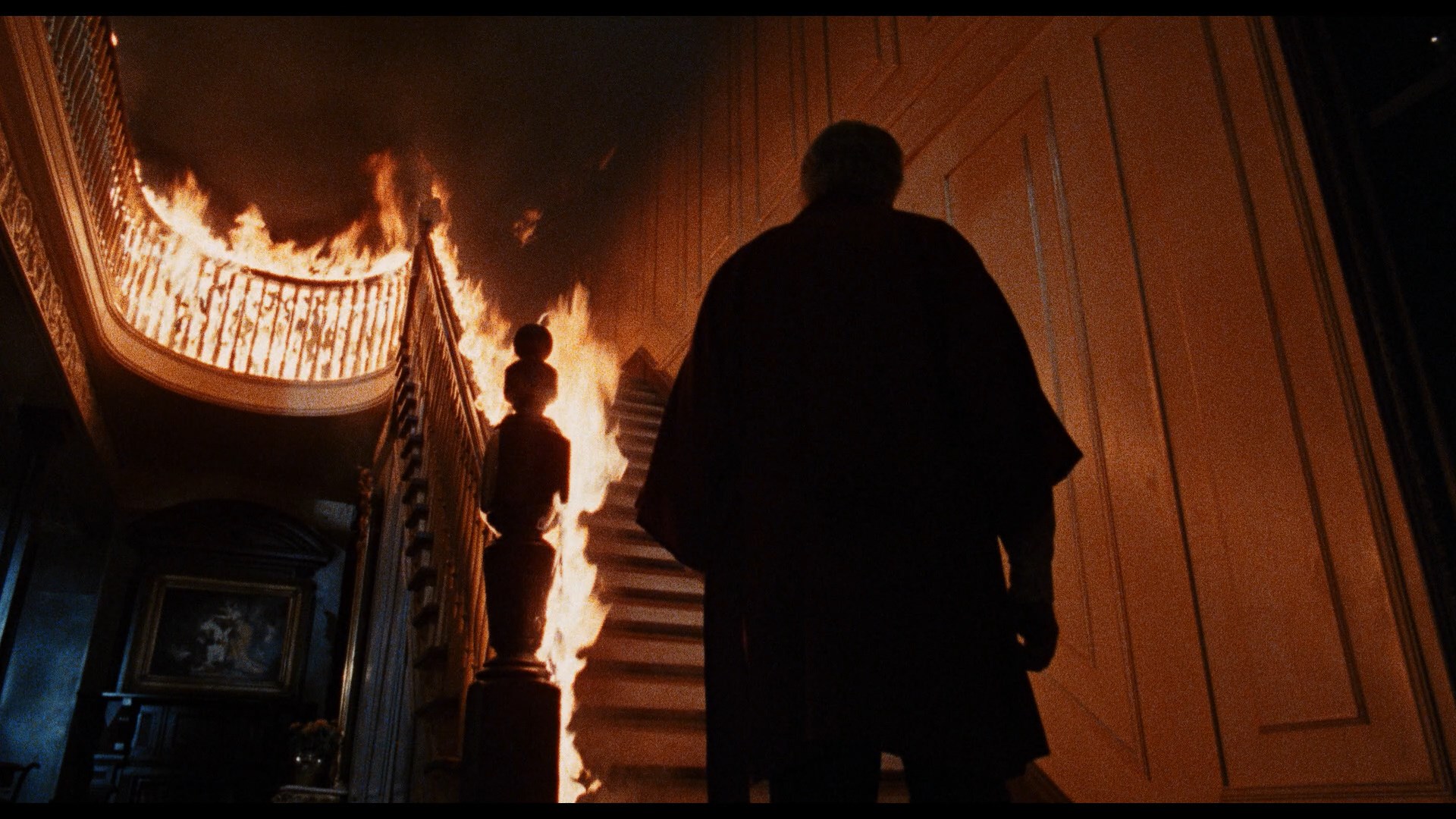 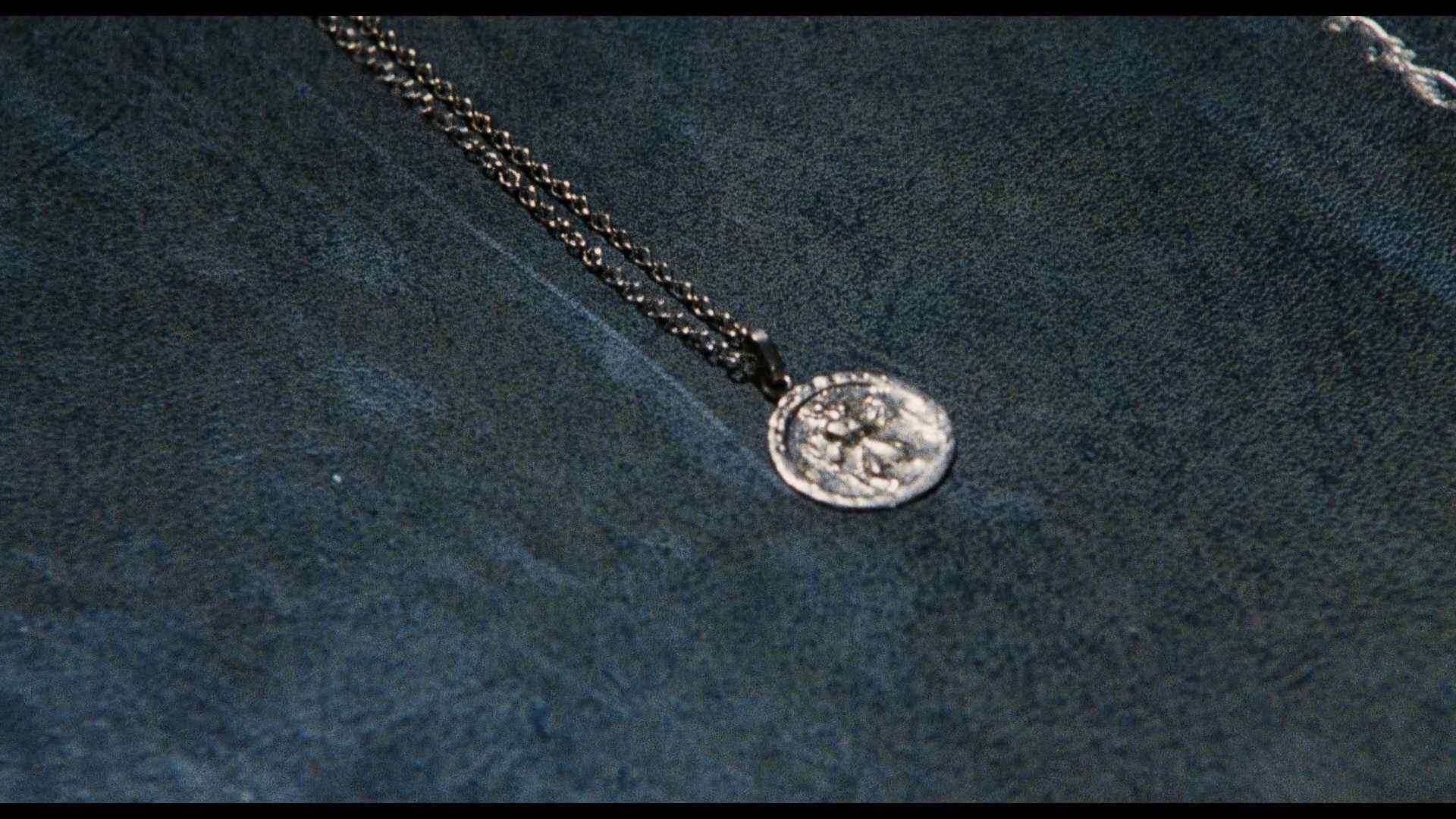 Center. Finally the disc rounds out with a poster and still gallery (8m52s) including some great production shots and loads of home video art, the theatrical trailer, and a "don't go in the attic!" TV spot. Extra points for the very clever anti-piracy warning at the beginning, too.

In 2022, Severin revisited the film for a three-disc UHD, Blu-ray and CD soundtrack combo, with the UHD featuring a 4K scan from the internegative. As expected it looks similar in terms of grain levels but the resolution uptick is visible once you get past the inherent generation loss of the main titles, with the interior scenes involving wood textures and wallpaper looking more tactile than before. It also features correct 5.1 and 2.0 DTS-HD MA English tracks with optional English subtitles for both the UHD and the included Blu-ray, so no more hunting for a correct version there. Of course this wouldn't be a release of The Changeling without some controversy, as some viewers watching it with HDR enabled have noted a red push to flesh tones in some scenes. The issue couldn't be replicated here on either a Sony projector or an OLED, but stay tuned for more details if they arise. The UHD also features the audio commentary and theatrical trailer. Turn down the lights, curl up under a blanket, and prepare to shiver.