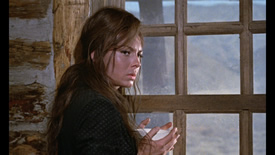 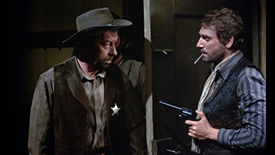 Can you call a film a spaghetti western if it's actually a French production with Italian co-financing? That's the question posed by the existence of this film, the first French attempt to delve into the box office bounty unleashed by Sergio Leone and his followers in the 1960s with A Fistful of Dollars and a wave of subsequent gunslinging hits. Like most of those films, this one was shot in Spain by director/star Robert Hossein during his three-year stint in Italy, and the popular leading man (who had appearing in Rififi and the Angelique series) had already established himself as a talent behind the camera with films like Death of a Killer and the excellent Le vampire de Düsseldorf. The resulting film here is odd but haunting, a unique work likely to confuse traditional spaghetti western fans but beguile those who look a heavy dash of introspection and atmosphere incorporated into a traditional revenge western format.

Complete with his own trademark quirk of slipping on a black glove whenever he's ready to kill, Manuel (Hossein) rides into town after a lengthy monochrome credit sequence in which a rogue gang on horseback executes a roped male victim. As it turns out, Manuel has been summoned by Maria (Black Sabbath's Mercier) to avenge the dead man, 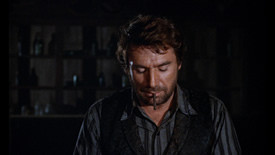 Ben, was was also a close friend of Manuel's and a former lover of Maria. Manuel infiltrates the Rogers family, the clan responsible for that murder and a host of 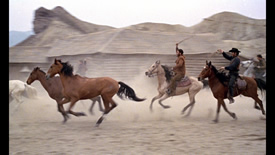 other corruptions in the town, by saving one of them during a showdown to win their trust. He uses the opportunity to seize the Rogers' prized daughter, Johanna (Balin), which quickly complicates matters when Maria's primitive brothers decide to take advantage of the situation and ignite a full-scale feud.

Hossein proudly claimed from the beginning that this was an attempt to do something different with the western with little debt to the style of the Italian films, but there's no denying the influence of Leone and company in the depiction of a physically abused loner hero and the galloping music score by Hossein's father, André, which tips its hat clearly to Ennio Morricone. That said, it also branches out in a few new directions, primarily via its spare, dark, and often claustrophobic look, shot in the narrower 1.66:1 aspect ratio rather than the more spacious widescreen compositions favored by Italian productions. It's also heavier on talk and allowing the characters to marinate in their unfortunate situations, with the first half in particular boasting very little action as the various chess pieces move into place. Hossein makes for an engaging hero of few words (actually, the film is 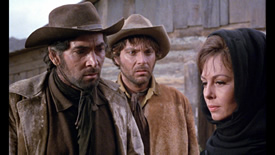 very light on dialogue in general), and behind the camera he pulls off some memorable sequences including a string of eerie, isolated moments in the finale that seem to take place in another world entirely. Definitely recommended if you're hungering for something a little different.

Widely released in Europe (with some English-language prints 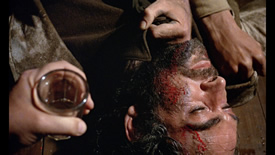 entitled The Rope and the Colt) but denied a theatrical run in America, this film has been a common title on the gray market circuit largely thanks to a co-writing credit to Dario Argento, whose minor participation has been the subject of debate over the years. Hossein has claimed Argento had little to no involvement, perhaps just contributing a few lines, and apparently Hossein's pal Sergio Leone (who gets a mention in the end credits) was also involved in the execution of one sequence, too. While many more famous western titles remain in home video limbo, it's fascinating to see this one snatched up for a simultaneous American and British release in a dual-format Blu-ray and DVD edition by Arrow Films, who present it in a new 2K HD scan from "original film elements," in this case an interpositive that stands as the best surviving source material. The opening in particular shows some signs of wear and aging, but it's several light years beyond 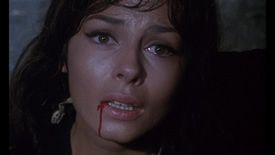 any of the scant previous video editions from Europe and a satisfying viewing experience, retaining a thick cinematic quality that feels like sitting in a movie theater in the late '60s. The English and Italian audio tracks are presented in PCM mono with optional English subtitles (both SDH and translated from the Italian version); neither one syncs up completely (as usual for international westerns) with the English track seemed to fit more often and generally coming off as the superior version. (It would've been interesting to have the French track for comparison.)

In addition to the Italian theatrical trailer, extras include a new 5-minute HD video interview with Hossein entitled "Remembering Sergio" in which he recalls his time in Italy living near Federico Fellini and getting involved with the local productions, including a brief appearance in Once Upon a Time in the West. Also included are two black-and-white archival TV pieces on the film, a TV news report from the set with Hossein and the cast (7 mins.) and a brief (2 mins.) interview with Hossein about the film's status as the first French contribution to the subgenre. The package comes with reversible sleeve art containing both the original poster art and a new design by Sean Phillips, plus the usual insert booklet with liner notes essays by Ginette Vincendeau and Rob Young.