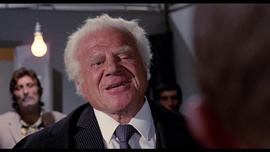 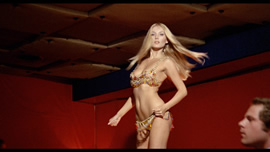 Also known as Caliber 9, the terrific Milano Calibre 9 grabs you by the throat right off the bat with one of the most violent pre-credits sequences in movie history and a pounding score by future Oscar winner Luis Bacalov and the rock group Osanna. Based on a hardboiled novel by Giorgio Scarbanenco, the plot is basically a self-acknowledged riff on Jean-Pierre Melville's crime films as a rough-looking con, Ugo (Moschin), swears he's going straight after being released from the slammer. However, his former boss (a fluffy-haired Lionel Stander way before Hart to Hart) thinks Ugo knows the whereabouts of $300,000 from his last job, as do the police. Does his girlfriend, nightclub danger Nelly (Don't Torture a Duckling's Bouchet, who steals the film with an amazing scene in a beaded bikini), think he knows a lot more than he's telling? And what about his old gangster colleague Rocco (The Bird with the Crystal Plumage's Adorf) who seems to have motivations of his own?

Along with concrete-faced Moschin (who also appeared in the more mainstream The Conformist and The Godfather, Part II), this fast-paced tale features a stellar roster of Italian character actors from the early '70s including Frank Wolff (The Lickerish Quartet), Luigi Pistilli (Bay of Blood), Philippe Leroy (The Frightened Woman), and Giuseppe Castellano (Emergency Squad). Besides, how can you possibly resist a gangster film where the worst insult you can call someone is "dingleberry?" 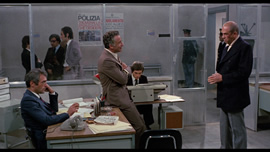 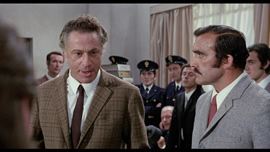 Milano Calibro 9 first hit DVD in Italy from Raro sporting English and Italian tracks with no subtitle options, later ported over to American DVD with the addition of English subs. As with many Italian films of the period, there's no clear winner between the Italian audio (which sounds classier) and the English (which is far more often in synch with what everyone's saying). The big extra is the half-hour "Caliber 9" documentary, which packs in chats with the late Di Leo, Bacalov, and Bouchet (who talks about the press leak of her bikini shoot), and more cast, crew and critics including Franco Lo Cascio, Maurizio Colombo, Luca Crovi, Andrea G. Pinketts, Armando Novelli, and. Amedeo Giomini. The more generic "Fernando Di Leo: The Genesis of the Genre" runs eight minutes longer as it surveys the director's crime film career and makes a case for his role as one of the pioneers in the genre. Many of the same participants return here (including Di Leo, obviously) along with other actors like Luc Merenda and Howard Ross sitting around on plush couches. A third featurette (and shortest of the bunch at 26 minutes), "Scerbanenco Noir," is sort of a general look at Italian cop and gangster films with some of the same critics (and Lamberto Bava, oddly) offering a primer on the '70s fondness for bullets and betrayal. There's no trailer, but you do get a still gallery with commentary by Moschin and a Di Leo bio and filmography. 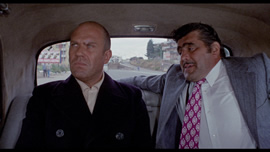 In 2012, Raro revisited the film courtesy of a fresh HD transfer for its first Di Leo Blu-ray set along with The Italian Connection, The Boss, and Rulers of the City. The same language options and extras were included, but unfortunately this turned out to be the clunkiest transfer of the set with its vivid colors and bright appearance compromised by that nasty digital watercolor scanning effect that plagued so many Italian HD releases around that time. The edges of clothing, hair, and buildings often turn into indistinct, 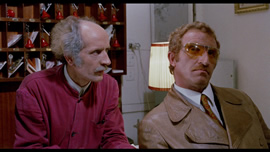 digital smudges, and the whole thing has a highly processed, artificial look that proves to be very distracting for much of the running time. Here's a sample grab from that release, though you have to see it in motion to get the full effect.

Fortunately there's a much better option in the UK courtesy of Arrow's dual-format Blu-ray and DVD release from 2015, whose transfer takes the Raro one out back, slams it against the wall a few times, and plants a bullet in its head. Everything looks far more natural, vivid, crisp, cinematic -- it's just a gorgeous piece of work and up there with the label's past Italian slam dunks like Zombie and Contamination. The LPCM Italian and English tracks sound great as well, with optional English subtitles. Some of the extras from the prior release are carried over here, namely "Fernando Di Leo: The Genesis of the Genre," the making-of documentary, and "Scerbanenco Noir," while the American and Italian trailers are finally unearthed and included as well. You also get a fine helping of new bonus material highlighted by "Italia Violenta," a 17-minute piece with Matthew Holness (creator and star of the insanely underrated Garth Merenghi's Darkplace) exploring how this film both addresses and subverts the conventions of the crime film and fits in with Di Leo's larger genre-tweaking filmography. There's also a new 3-minute audio interview with Moschin about his experiences making the film, plus the usual eye-catching reversible packaging complete with liner notes by Italian crime historian Roberto Curti. Needless to say, it's quite a massive upgrade all around and highly recommended.