If you think of the Federico Fellini filmography as a series of college courses, 8 1/2 is Calculus III - the difficult, towering, but rewarding hurdle after which everything else feels 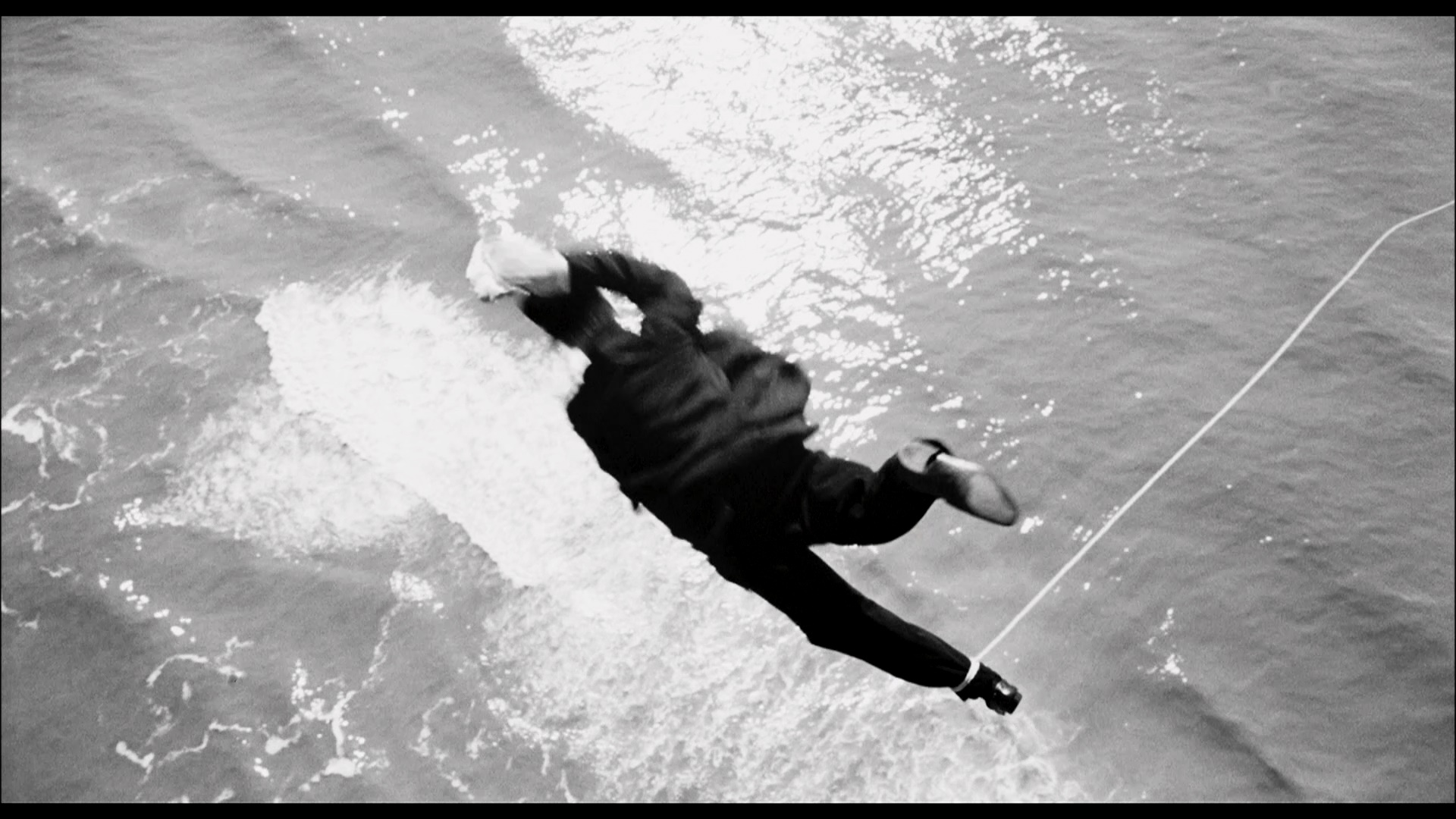 utterly simple. Is it a work of towering brilliance or a self-indulgent, rambling spectacle? Well, both of course, and that's most of the fun.

Burned out by the hectic pace of mainting his status as a celebrity director, Guido (Marcello Mastroianni) finds temporary release by drifting off into fantasies, the first of which finds him ascending into the clouds during a traffic jam. Guido seeks solace and rejuvenation at a remote health spa for the rich and privileged, where he continues to encounter journalists, his producer (Guido Alberti), and most inconvenient of all, his aloof wife, Luisa (Anouk Aimée), and his sultry mistress, Carla (Sandra Milo). His flights of fancy continue as he flashes back and forth between past, present, and future, his childhood memories sprinkled with outrageous exaggeration and moments of pure surrealism: a towering buxom beauty, a horde of women (including Italian horror icon Barbara Steele) submitting to his will as he whips them into shape, and the angelic epitome of inspiration, Claudia Cardinale herself. Meanwhile his producer initiates preparations for a massive science fiction film, the antithesis of the pure and honest film Guido longs to make. 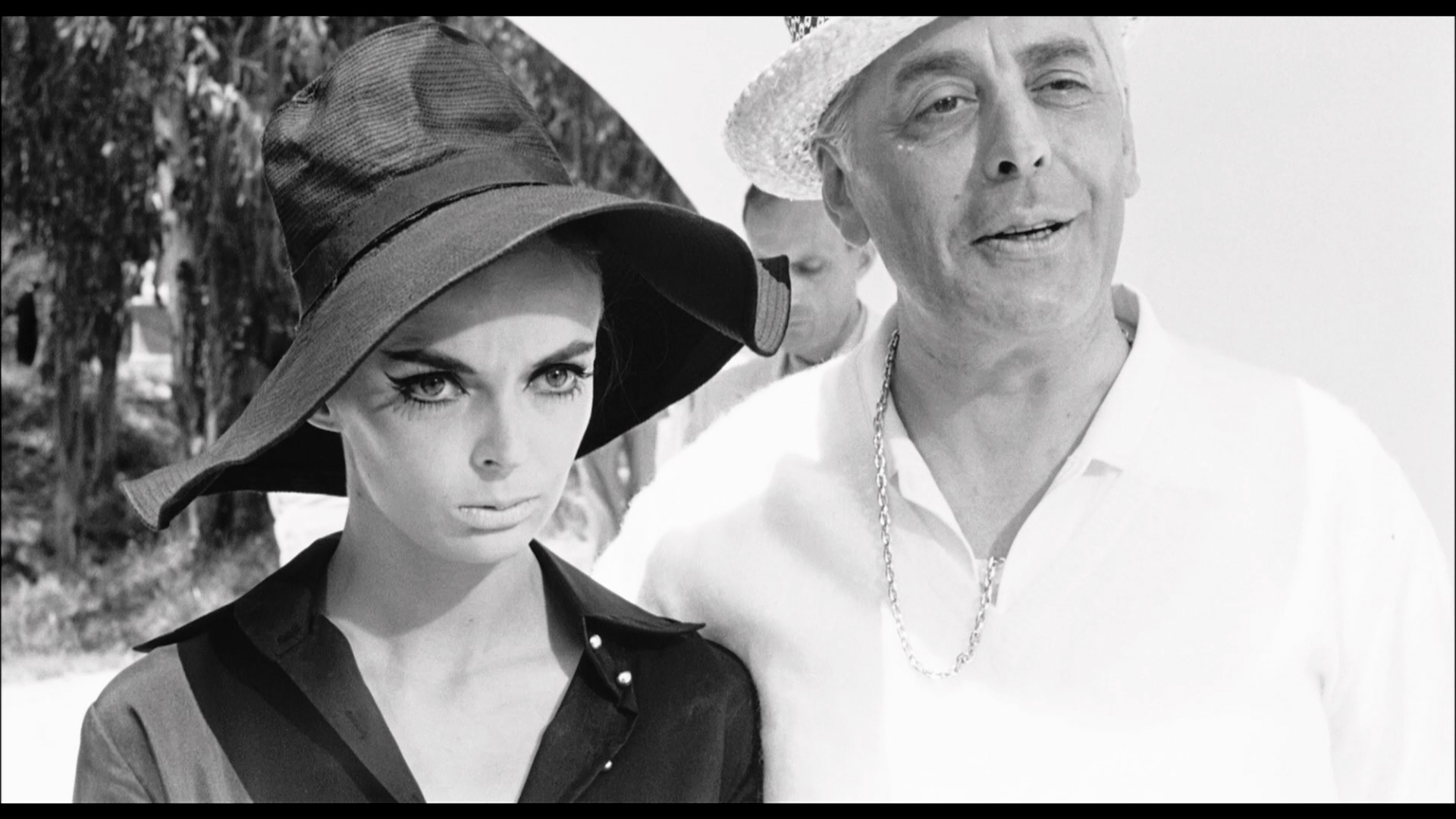 Along with La Dolce Vita, this film personifies what people associate with the term "Felliniesque." Buxom women bouncing across the screen, eccentric people galavanting through fields and carnivalesque settings, and bizarre fantasy sequences pepper this sprawling foray into the mind of a director unsure of how to progress with his next film. Of course, it's no secret that this subject was exactly the problem Fellini himself had at the time, making this an elaborate game of mirrors in which Fellini and his cinematic alter ego become difficult to separate. Everyone involved operates at the top of their form here, from all of the women (who seem to appreciate being at the center of Fellini's attention when his camera turns to them) to Nino Rota's buoyant score, easily one of his best.

Criterion's earlier laserdisc of 8 1/2 looked fairly good, considering, and certainly beat out the more widely seen English dubbed edition from MPI, which was washed out and barely letterboxed at 1.55:1. The dubbing per se actually wasn't that bad, since Fellini as usual had all of the Italian dialogue looped in later with only scant regard for the actors' lip movements anyway. In either English or Italian, you're not hearing the actors' voices. (His later films, most notably Satyricon and Casanova, actually hold up better in their English 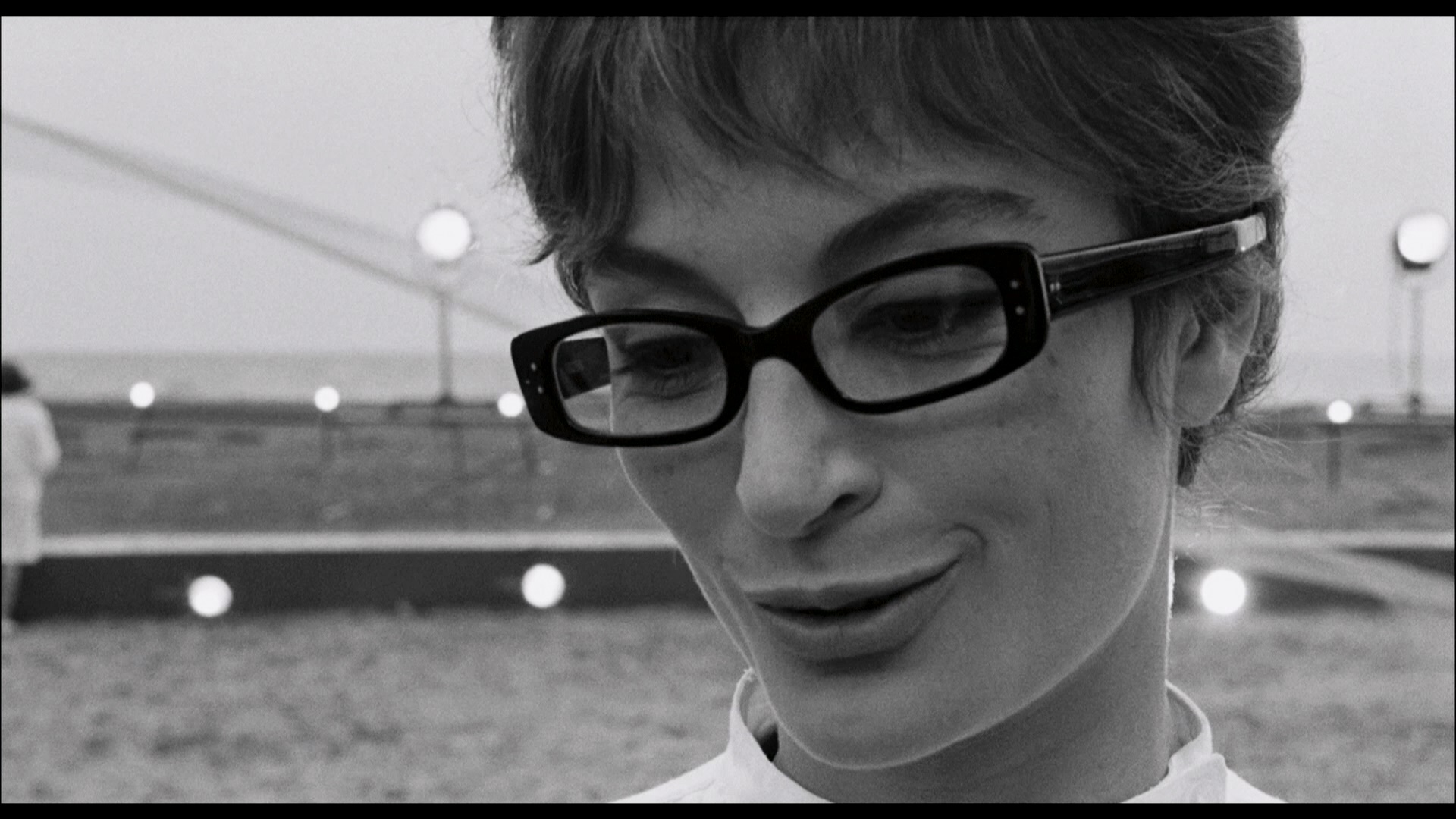 dubbed versions, which are sadly the lesser seen variants.) The DVD looks almost immaculate, with only some vague fluttering in dark areas inherent in the original film offering any distraction from the amazing, beautifully lit black and white visuals.

More than just a presentation of the movie, the DVD is also a handy crash course in Fellini in general. A commentary track (apparently edited together from two different locales) features Fellini critic and colleague Gideon Bachmann and NYU film professor Antonio Monda dissecting the film and placing it in context within the director's career. The track starts uneasily, as most of the discussion points out to the viewer clues to differentiate between the dream sequences and reality (which also drains out a lot of the fun from the film), but gradually the commentary becomes looser and less focused on picking apart what everything in the film might mean. Other extras on the first disc include an engaging seven minute intro by Terry Gilliam (which oddly doesn't play before the film itself and must be selected separately), an illustrated booklet of Fellini essays (including snippets from his autobiography), and the kinky American theatrical trailer (prominently pushing distributor Joseph Levine, as usual). Disc two offers much more, including "Fellini: A Director's Notebook" (a 52 minute autobiographical study detailing his work habits), the 48 minute "Nino Rota: Between Cinema and Concert" a tribute to one of Italy's most esteemed musical talents; a large selection of production and promotional photographs; and interviews with Milo, director Lina Wertmuller, and Vittorio Storaro (a disciple of this film's brilliant cinematographer, Gianni di Venanzo). Even for those who have yet to submit to the eccentric delights of 8 1/2, this DVD set will prove to be a must have for anyone remotely interested in foreign cinema.

Probably because it features few of his recognizable standard performers nor the requisite Nino Rota music score, Fellini's E la Nave Va (And the Ship Sails On) has never enjoyed a reputation equal to most of his earlier films. However, on both technical and artist levels, the film is easily as good some of the more famous films from his "excessive" period (Satyricon, Casanova, City of Women, etc.), and foreign film addicts would do well to discover this unheralded little gem.

In the summer of 1914, a luxury liner (filmed completely on the soundstages of Cinecitta!) departs from the Italian coast. The passengers on board have all congregated with one mission in mind: to pay tribute and scatter the ashes of Tetua, a revered opera diva. The events are presented for the audience through the eyes of Orlando (David Lynch favorite Freddie Jones), a gregarious reporter who spends most of his time addressing the camera. This delirious ship of exotic fools revels in lavish banquets, self indulgent soirees, and other idle dalliances of the rich.

Their chic self absorption begins to crack when the captain rescues a band of Serbian refugees who have been set adrift to escape the imminent terror of World War I. As the passengers soon realize, even in the middle of the ocean, you cannot escape reality.

One of Fellini's most visually sumptuous efforts, And the Ship Sails On basks in its own glorious artifice. Characters often make ironic remarks while staring at the ultra-saturated backdrops ("Look at that sunset -- it almost appears to be painted on!") and change costumes more often than their expressions. Like most Fellini films, this film was shot without sound and later dubbed in due to the motley international players (Jones' dubbing is especially distracting), but the Italian version is as authentic as any. The opening sequence ranks as one of the most audacious of Fellini's many cinematic feats; the film begins as a silent, sepia-toned depiction of the ship's preparations before departure, with sound effects gradually layered on as the passengers begin to arrive. One by one the actors begin to sing, with Plenizio's operatic works continuing to appear throughout the film as musical accompaniment. Upon the arrival of the ashes, the film bursts into color -- and the voyage begins. Without giving anything away, the finale is perhaps even more audacious and reminiscent of 8 1/2 in its puckish cinematic trickery.

Criterion's edition of And the Ship Sails On clocks in at just over 127 minutes, though versions running as long as 134 minutes have been reported in Europe. Whether this discrepancy is due to Fellini's last minute trims (not an uncommon occurrence) or the variances of converting European video for the U.S. is uncertain, but the film doesn't appear to be missing anything significant. The image quality is very good, especially considering the condition of most pre-1990 Italian films, though not as dazzling and clear as Nights of Cabiria. The easily legible English subtitles are optional and usually very accurate. No extras aside from a fold out booklet with excerpts from the book, I, Fellini. Amazingly, this disc is not time encoded, a trend Criterion will hopefully discontinue in the future.

While America was celebrating its insulated world of the nuclear family and flag-waving in the 1950s, foreign cinema gradually slipped into public consciousness and exposed viewers to some visions that wouldn't be seen coming out of Hollywood until the late '60s at best. One of the pioneers in this field, Federico Fellini, took the post-World War II concept of neorealism and gave it his own unique twist, and of all of his films, perhaps Nights of Cabiria (Le Notti di Cabiria) was the most ahead of its time. Here is a film with an individualistic female protagonist in a world where - gasp! - most of the men are jerks, she doesn't experience a magical rescue a la Pretty Woman, and the only salvation comes through her own steadfast positive attitude. Rather than flinging one misery after another at his characters like such other neorealist films as Umberto D., Fellini displays admiration and concern for his heroine, most likely due in part to the fact that the role is played by his wife, Giulietta Masina. While Masina sometimes seemed hammy and miscast in her other films for her husband, here she's absolutely perfect and offers many startling non-verbal moments in which her gorgeous, soulful eyes communicate everything the audience needs to know. And what a glorious final shot!

The story of Cabiria should be familiar to anyone has seen its American musical stage version, Sweet Charity, which was later filmed (very well) with Shirley MacLaine. Most of the vignettes in the film lead to the perky prostitute Cabiria being tossed aside or attacked in some way, but Fellini counters this potentially downbeat material by introducing moments of quirky humor (Cabiria runs into a door, goes to an odd and utterly Fellini vaudeville show, etc.) and surprising pathos, thanks in no small part to Nino Rota's beautiful score. The DVD reinstates a seven minute sequence in which Cabiria encounters an impoverished former fellow hooker out in the country and returns to Rome with a nameless man carrying a sack. The scene is nicely acted but adds little to the film; according to the interview with producer De Laurentiis, he sliced the sequence from the film and stole it from Fellini, only to return it to the director several years later. The quality of the presentation here is immaculate, and any film students who have suffered through horrendous, washed-out, scratchy prints or public domain tapes will find this a completely new experience. While the sound still remains undeniably of its era, with a few shrill moments of dialogue, the audio is a radical improvement. Dialogue plays an especially important role here, as Fellini had up and coming filmmaker Pier Paolo Pasolini adapt the script into common street dialect. While Fellini usually shot without sound and dubbed the dialogue in later (see Satyricon for a particularly obvious example), Cabiria remains that rarity, an Italian film that really is in Italian. The new optional subtitles are consistently clear and accurate, while the new English dub track is surprisngly well done, with most of the characters sporting appropriate Italian accents. Criterion's satisfying package also includes an early Masina/Cabiria appearance from Fellini's The White Sheik (in noticeably rougher condition) and the original and U.S. reissue trailers. The price tag may seem a little steep, but anyone with a love for cinema and Fellini in particular should find this well worth it.