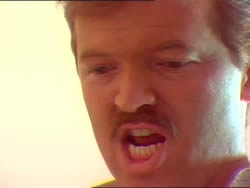 While America and Britain may be the most familiar sources of shot-on-video horror during the golden era of VHS, they were by no means the only ones. The fan circuit was alive with fans swapping tapes from the farthest reaches of Japan, France, and any number of other countries, and Germany got in on the act with several outrageous little camcorder moral atrocities of its own. One of its most 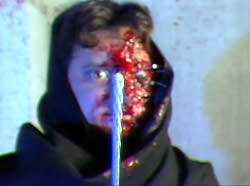 talked-about filmmakers in this subterranean realm came near the format's twilight days in 1987 in the form of Olaf Ittenbach, who had gorehounds' tongues a-wagging with a splattery little number called Black Past, about the bloody havoc unleashed by an evil mirror. Gray market copies became all the rage, but that was nothing compared to what Olaf had in next: The Burning Moon, a grisly dual-story anthology climaxing with a ten-minute descent into hell that plays like Coffin Joe on a Wal-Mart budget with five hundred gallons of fake blood.

Garbed in amusing faux-metal head/goth drag, Ittenbach also appears onscreen as a gang member forced by his parents to babysit his little sister. Naturally he decides to pass the time by telling her horror stories, after shooting a fix into his arm and seeing a flaming full moon in the sky. Story one features the extremely ill-fated dating habits of a young, recently escaped serial killer (Muggenthaler) whose heavy petting sessions keep getting interrupted by flashbacks of his grandpa hacking his family into little chunks and screaming "You're next!" Of course, it's all downhill from there as he runs riot through the neighborhood. Next up, a deranged priest (Höss) who also enjoys killing the odd stranger or two manages to pin his crimes on a poor innocent schmuck. However, fate has a surprise in store for him when he finds himself on a slippery slope straight to hell. 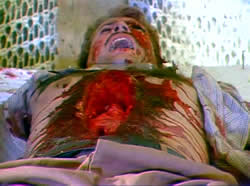 Though the opening half hour or so is deceptively tame, The Burning Moon is obviously dedicated to one primary purpose: as much splatter as humanly possible in just over an hour and a half. Eyeballs get plucked out, mallets whack prosthetic heads into pulp, butcher knives go through jawbones… well, you get the idea. The fact that it's actually pretty competent, reasonably convincing, and very 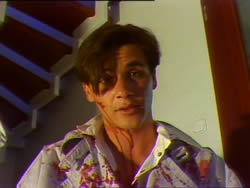 energetic was enough to get this one plenty of fan attention, and it's one of the few German SOV films to get an American release at the time (courtesy of Dead Alive). The film was actually filmed not long after Black Past, but it took over five years to actually get a commercial release and wound up being banned in its native country (where the censorship laws are almost impossible for an outside to untangle). Seen today in an era of hipster horror and lame CGI gore, The Burning Moon is actually almost charming in its sick puppy desire to please; everyone involved is really, really committed both behind and in front of the camera, and though it's obviously a mostly amateur production all the way, it's hard for a horror fan not to smile with glee during its most audacious moments. Not surprisingly, Ittenbach went on to direct several more films including House of Blood, No Reason, and The Haunting of Rebecca Verlaine (none quite as notorious as this one) and became an in-demand FX guy for several of his fellow countrymen's films including, uh, BloodRayne.

Intervision's DVD release obviously does what it can given the fact that this will never be better than '80s VHS quality in the end. That said, it's all very watchable and free from any distracting tape rolls, tracking lines, and so on. Optional English subtitles are included for the mono German dialogue, which again is only going to sound as good as it was originally recorded.A 46-minute vintage featurette comes with loads of behind-the-scenes footage including cast and crew interviews as well as the expected juicy looks at creating the effects. It's also subtitled in English, so you can fully savor comments like "I've spent a tremendous amount of time mixing artificial blood" and "It was sticky everywhere." Other extras include the original trailers and bonus trailers for The ABCs of Love and Sex and The Secret Life: Jeffrey Dahmer.