Made at the height of the post-Bruce Lee martial arts craze, Budo: The Art of Killing is something of an odd man out in Synapse's ongoing, exploitation-oriented "Asian Cult Cinema Collection." Here we have a completely serious and engrossing documentary 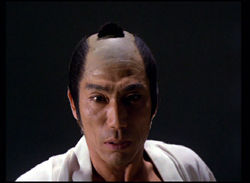 from Arthur David (the man behind the far more salacious Brutes and Savages) that developed a cult following despite a spotty distribution history, passing from a modest theatrical run courtesy of Crown International to a brief run on VHS from Prism. As with Davis' other opus, the rights eventually landed with Richard Gordon, and now the film can finally be seen in a 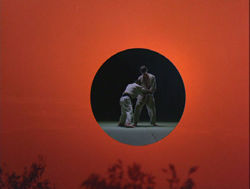 Basically plotless, the film delves into the various forms of martial arts referred to as "Budo" including Aikido, Katana, and more commonly known forms like Karate, Judo, and even Sumo wrestling. The film is surprisingly slick and stylish, with interjections of masks and atmospheric lighting providing visual interest even for newcomers. From a martial arts standpoint it's a stunning display, with each practitioner performing assured, often eye-popping demonstrations for the camera. Whether the weapons are bare hands or perilously sharp swords (whose creation is detailed in one excellent passage), the artists exhibit a level of discpline and care that can't fail to impress. The Katana segment that climaxes the film is a particular 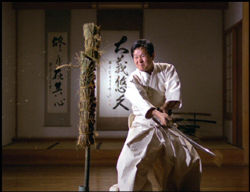 stunner, capped off with a gory flourish that will have viewers scrambling for their pause buttons.

Considering its relative rarity, Budo looks magnificent in its DVD incarnation. The element is generally in great shape with bold colors and absolutely exquisite detail; a little age debris is visible here and there (mainly in a few close ups that were apparently shot on a different film stock) but it certainly befits the tone of the film. The transfer is presented in its originaly 1.33:1 aspect ratio with windowboxing visible on some monitors to present as much information as possible. (If you're so inclined, zooming in to 1.78:1 on an anamorphic TV reveals balanced compositions as well.) The mono audio sounds fine and clear. As for extras, apparently there wasn't much available; you get a still frame version of the press kit and excellent liner notes by Chris Poggiali, who ties the film in to several other notable grindhouse gems of "reality" cinema.