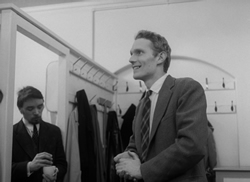 A cult writer if ever there was one, B.S. Johnson emerged as one of Britain's most fascinating experimental authors in the 1 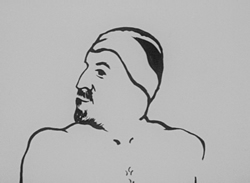 960s; however, he also ventured into poetry, criticism, and both film and television productions, some adapted from his written work with others completely original. When he died by his own hand in 1973 at the age of 40, he left behind a legacy that now seems far ahead of its time.

Culled together in the BFI's dual-format Blu-Ray and DVD set is a collection of Johnson's work starting with his most widely-seen debut effort, "You're Human Like the Rest of Them." This 17-minute, 1967 adaptation of his decasyllabic poem features actor William Hoyland (later seen in far more mainstream titles like Hellboy and For Your Eyes Only) as a teacher reciting the lines first in a hospital surrounded by aging pensioners (being lectured on proper lifting techniques by a nurse) and then at work in a classroom. Along the way there's quite a bit of absurdist comedy, including an imaginary but functioning shotgun and punctuated cutaways to cows and anatomical drawings. Johnson's much-noted debt to Samuel Beckett is obviously in play here, especially the classroom sequence, but some of the visual flourishes are striking including a sudden switch to vivid color at the end for a brief montage.

Next is the following year's silent, very short (2 minutes) animated piece, "Up Yours Too Guillaume Apollinaire!," originally created for the Institute of Contemporary Art's tribute to the 50th anniversary of the titular artist's death. It's essentially a bit of risque wordplay with drawing of anatomical parts transforming in and out of familiar words, pointing out the fluidity of the body parts that separate male and female. Then we reach the most colorful and challenging of the films, 1969's "Paradigm," a James Joyce-ian experiment with Hoyland again talking to the camera in a fabricated language, going from young and naked to old, clothed, and inarticulate over the course of a few minutes. It's not the kind of thing you'd put on to watch cold, of course, but as an avant garde film it's a bold and highly memorable statement about the decline of the body and intellect. Humorously, the liner notes point out that, at the Oberhausen Film Festival, director Walerian Borowczyk called it the worst short he'd ever seen. The mind boggles.

At this point the contents of the Blu-Ray and DVD part ways momentarily, as the standard def disc contains a couple of extra shorts whose low resolution means they weren't suited to an HD presentation. First of these is "The Unfortunates," a sort of 15-minute call an 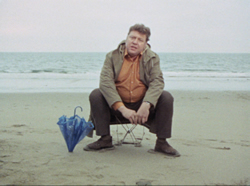 d response to one of Johnson's most famous novels (famously published without binding in a box, with only the first and last chapter designated with the rest able to be shuffled around at the reader's discretion). Here Hoyland narrates portions from the book, a collage of memories covering everyday life in England slipping between the euphoric and tragic. Later in the DVD but also presented in SD only is "Not Counting the Savages," a 1972 drama Johnson penned for the series Thirty Minute Theatre and which the author felt was ruined by its lead performance by Hugh Burden as a surgeon whose benevolent professional demeanor contrasts with his unpleasant persona at home. A very early directorial effort for Mike Newell, this feels like something of a cousin to the ironic dramas being written by Dennis Potter around the same time; though originally broadcast in color, this survives now only as a rough black and white kinescope, which is still more fortunate than many other broadcasts in decades past. 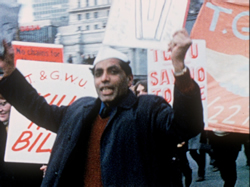 The remainder of the shorts are present on both discs, presented like the previous BD ones in excellent condition from new hi-def transfers. "Unfair!" (1970) and "March!" (1971) were commissioned by the Freeprop, a production company formed by ACTT (Association of Cinematograph, Television and allied Technicians), both dealing with the consequences of and protests against the Industrial Relations Act intended to clamp down on trade unions. Both are basically educational propaganda films meant to be shown in the workplace, with musical choices and editing adding some dynamism to footage of a wide variety of workers and fellow protestors railing against an act that would soon be passed into law. Then it's back to Beckett territory for the one-minute "Poem" from 1971, an enigmatic miniature with Johnson's camera contemplating a woman in white while Hoyland provides recitation duties again on the soundtrack.

Finally we reach the final and longest of the films, with Johnson himself taking center stage. "On Reflection: B.S. Johnson on Dr. Samuel Johnson" from 1971 is a virtuoso verbal reflection on the legendary 18th century man of letters with some hilarious jabs at the publishing industry. Also presented in an audacious monologue form is 1974's "Fat Man on a Beach," his final filmed work and whose title reflects his own attitudes about his p 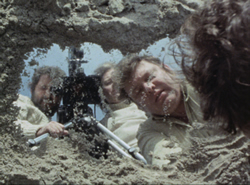 hysical appearance. It's probably the sunniest of all the films, actually, as he appears in a variety of spots on a beach in Wales and expounds upon man's relationship with nature and the world at large, sometimes swirling in comical circles with the usual intricate wordplay.

This release also marks the return of the BFI's much-missed Flipside series, a collection whose astonishing track record has made it one of the most significant developments for film buffs in the Blu-Ray era. There really isn't a bum title in the batch, and that's still the case here. All of the titles on the Blu-Ray look excellent and up to the label's usual standards (though the Samuel Johnson one is left as is with some damage inherent in the original materials), with the two bonus DVD shorts obviously suffering in comparison but very welcome here for their historical value.

Also included is a reel of silent outtakes from "Fat Man on a Beach" and a new, interesting peek at "The Johnson Papers," a video document of the contents from Johnson's papers and other ephemera at the British Library (including some seashells from that last film!). The library's Joanna Norledge sifts through some of these treasures and makes one wish they had a little more time to go through what is probably a dizzying archive. The substantial liner notes booklet also includes contributions from a number of writers and might actually be good to sample before watching the films; much of the context here is useful and points out details and themes that might otherwise go unnoticed. Among these are an intro by Steve Johnson, a general essay by Jonathan Coe, notes on the titular short by director Bruce Beresford (head of the production board at the BFI for the Experimental Film Fund at the time), and notes on each film by Dan Fox, David Quantick, Carmen Callil, Jim Dempster, Vic Pratt, Julia Jordan, and Michael Bakewell.