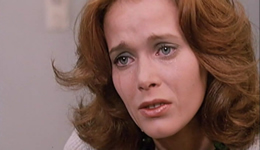 sordid sex thrillers churning out of its European neighbors in the 1970s is Because of the Cats, which was imported to the U.S. by Joseph Brenner Associates to keep company with their better known hits like Torso, Autopsy and Eyeball. After that it became a familiar VHS title from Prism in video stores throughout the '80s before dropping out of sight for decades, popping up only on Dutch DVD in the early '00s.

Well, it's finally back on U.S. shores again courtesy of a DVD from One 7 Movies, complete with a new titles (Brutalization) emblazoned on the packaging but the original name still intact on the film itself, which was almost certainly sourced from the (now fairly scarce) Dutch disc complete with the same British theatrical trailer to boot. At least the PAL running time has been correctly adjusted back to 97 minutes as it should be, and the anamorphic transfer itself is still a pretty decent one despite some inherent softness and glaring edge enhancement during brighter scenes.

As for the film itself, its main claim to notoriety is comes soon after the groovy opening credits in which a bourgeois Amsterdam couple arrives home to find some suit-clad burglars with black stockings over their heads already inside. What follows is a lengthy, nasty, and unflinching rape sequence that had drive-in patrons doing double takes back in the '70s, and it's still pretty strong stuff today. After that the film settles down into Euro crime thriller mode as British/Dutch cop Inspector van der Valk (familiar UK TV and Hammer Films veteran Marshall) is summoned to help the juvenile vice squad deal with the criminals. He quickly winds up on the track of the Ravens, a gang of boys in a nearby seaside town. They seem to mostly pass the time shooting cans on the beach and causing trouble 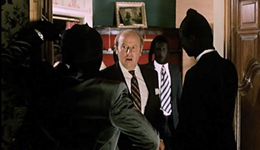 (and yes, there's a talking pet raven), but that's just the beginning as our detective uncovers a similar girl gang called the Cats, further 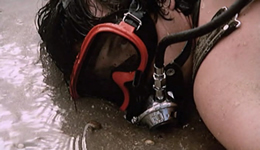 burglaries and violence, and bizarre initiation rituals that tie it all together.

Though promoted as an exploitation film, this is really as much a study of disenfranchised '70s adolescents in keeping with the prestigious director, Fonds Rademakers, who made his debut with the acclaimed Village by the River in 1958 and helmed a far better known look at adolescent mind control in 1986, The Assault, which went on to win an Oscar for Foreign Language Film. This film was obviously a bid for wider international acceptance given the fact it was shot entirely in English, even bringing in Marshall (who has no qualms about doing as much nudity as his fellow Dutch actors) to make it even more marketable overseas. The film's success was an obvious influence on later Dutch films, particularly the ridiculously fun Amsterdamed (which features a similar story structure), though its misleading marketing continues to be an issue with most distributors hyping the presence of the late Sylvia Kristel, who was about to break through in Emmanuelle. She doesn't do much more than pop in for a few minutes and cry, but apparently that's enough to keep this one in circulation. Fortunately if you know what you're really getting into and can ignore the misleading torture tone of the current DVD packaging, this is still an enjoyable mixture of filthy sleaze and art house gloss.