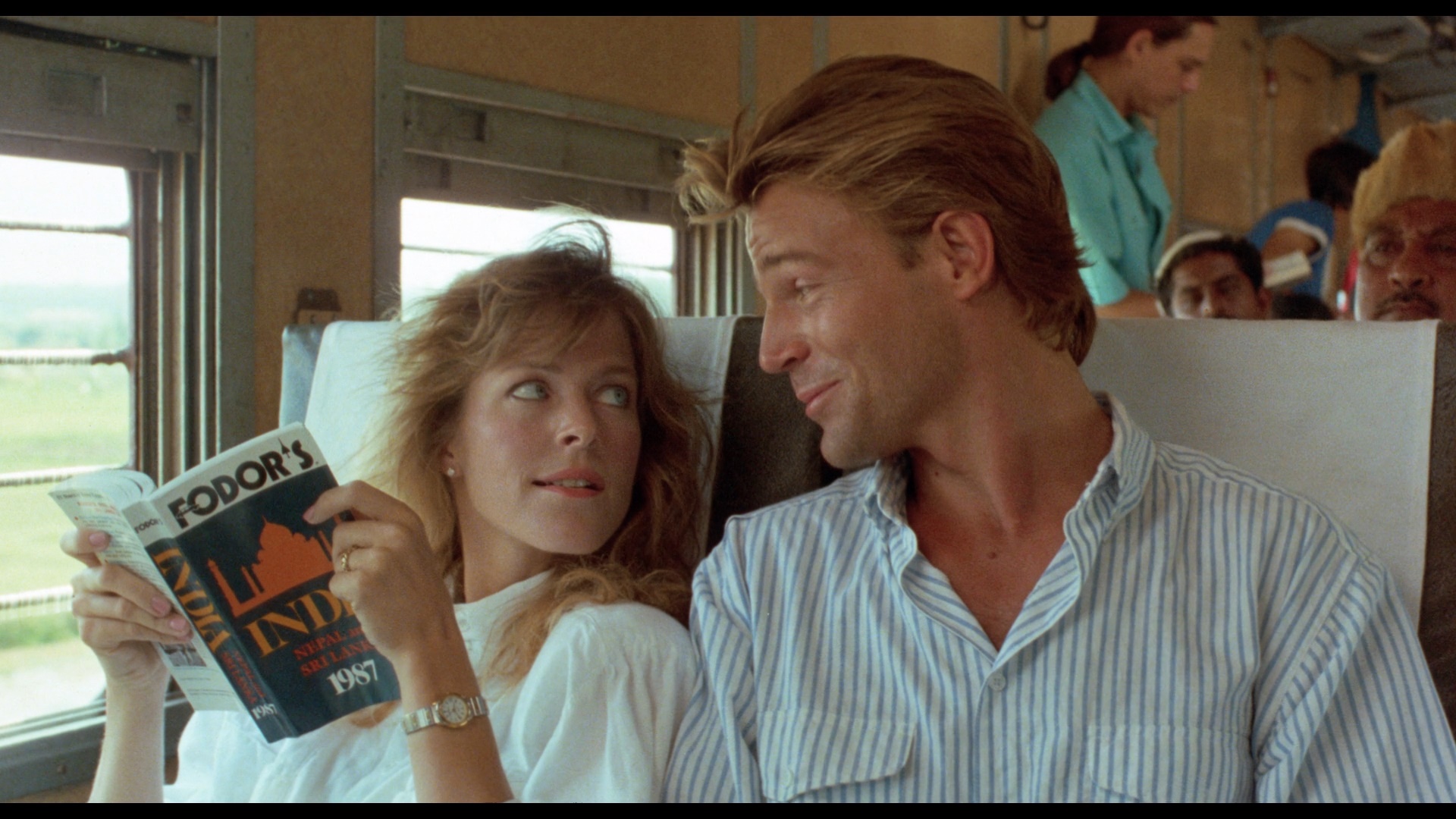 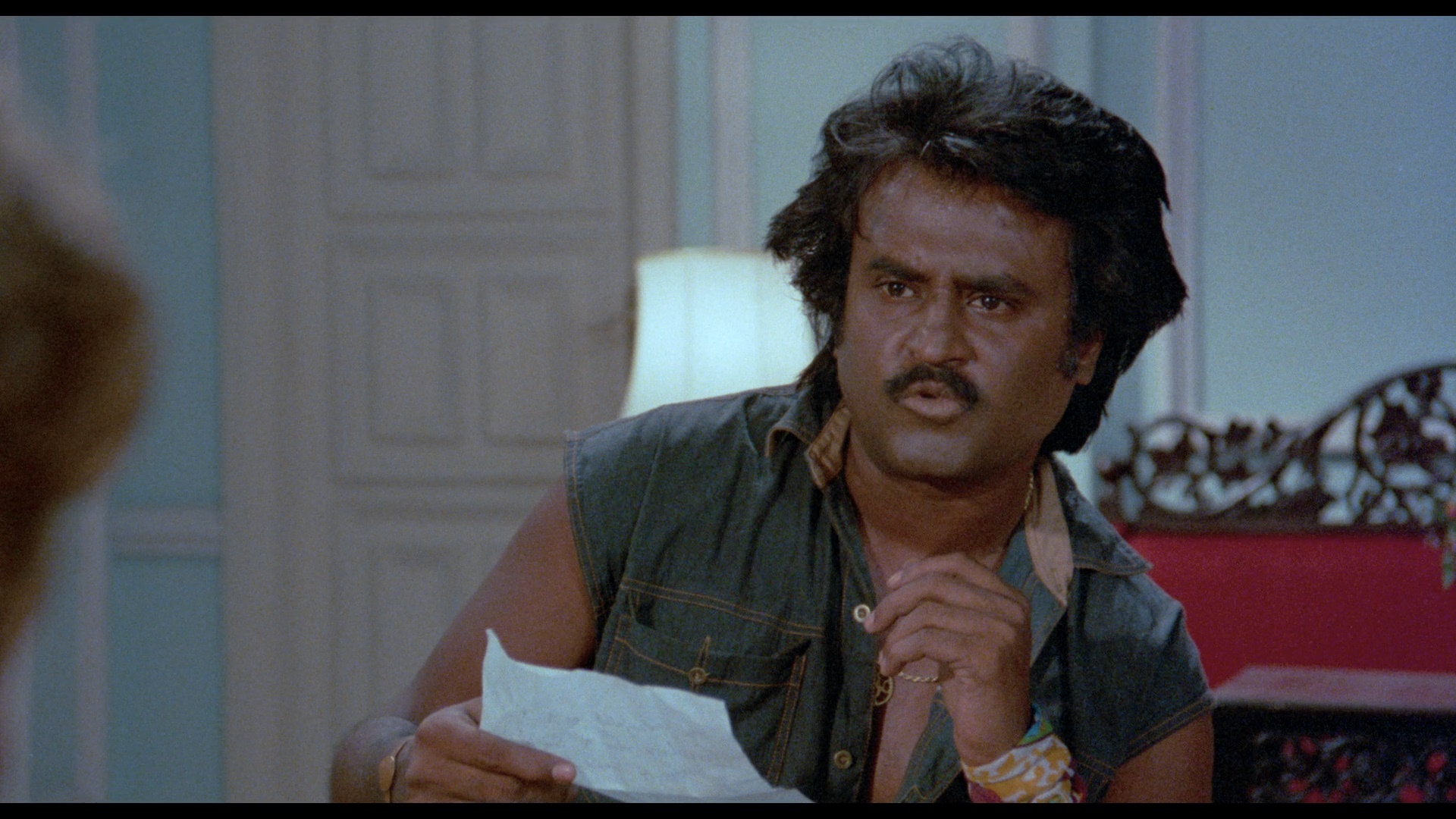 Omega Entertainment had turned into a full-fledged movie factory when it turned out this amusing little India-set imitation of Romancing the Stone in 1988, a year that saw a whopping eleven other releases from the company including Grandmother's House and Nightmare at Noon. Like those other films, this one was shot with reasonably slick production values suitable for the big screen but greeted most viewers on home video instead including a direct-to-VHS release in the U.S. from Forum Home Video a year later. This proved to be one of the earliest feature films from film school grad Dwight H. Little, who had proven his mettle with the low-budget action film Getting Even and parlayed this assignment into getting Halloween 4: The Return of Michael Myers, the start of a brief but enjoyable genre career that also included Rapid Fire, Phantom of the Opera, and Marked for Death.

Shot on location in India, our perilous tale revolves around a hunt for the titular bloodstone, a large, mystical ruby that's passed between several hands over the centuries. When a thief named Paul (Kehler) snatches the ruby for the nefarious black market kingpin Ludwig Van Hoeven (Dracula A.D. 1972's Neame), complications with the authorities land the jewel in the unwitting hands of two recently married American tourists, Sandy (Stimely) and Stephanie (Nicholas), who in turn end up crossing paths with taxi driver Sabu (popular Tamil actor Rajinikanth). Chases, fisticuffs, abductions, and other mishaps ensue as everyone scrambles to locate the stone without losing 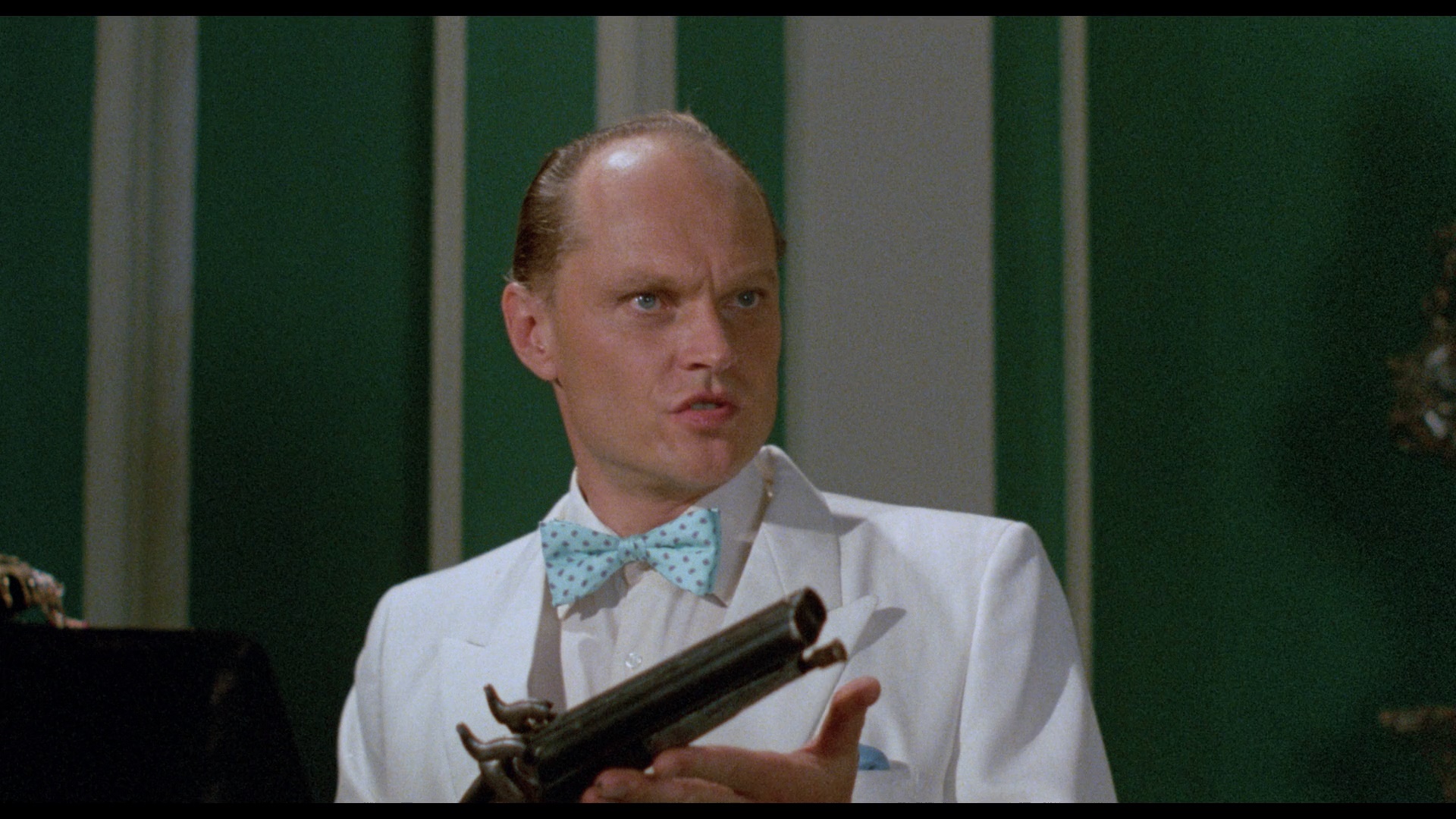 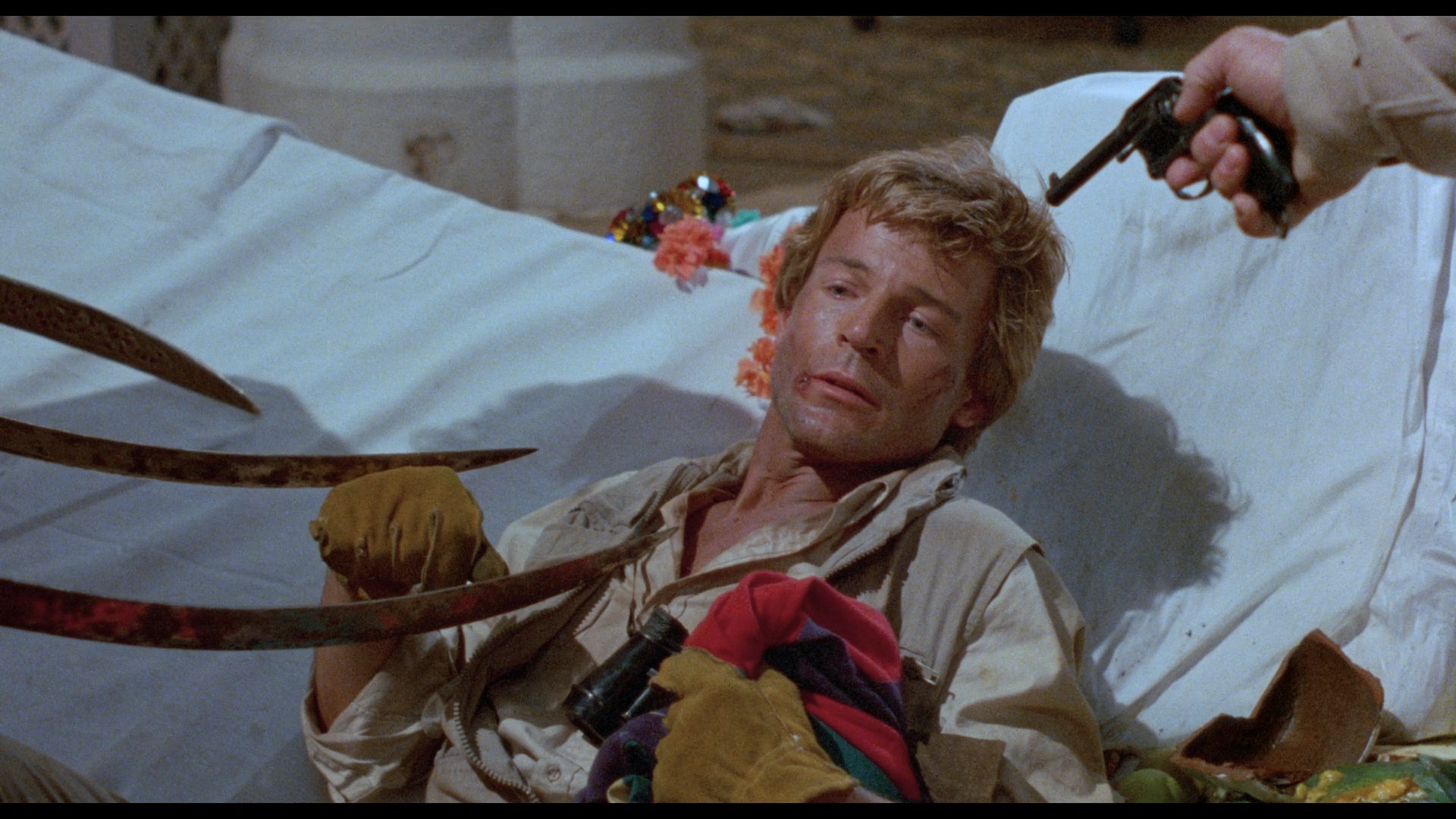 ives in the process.

The setting and unusual combination of Indian, British, and American actors give this actioner a bit more flavor than the usual action fare being cranked out at the time, and though it's little more than an amusing time waster, Bloodstone benefits from Little's efficient direction and a welcome sense of humor including a bit of goofy slapstick. Apart from a smidgen of nudity, it's also pretty clean with most of the violence staying within PG-13 territory; if you want to introduce any younger viewers to the weird world of Mastorakis' cinema, this isn't a bad place to start (albeit a very atypical one).

After its time on VHS, Bloodstone joined its Omega brethren on DVD from from Image Entertainment in 2003 with a solid widescreen transfer (in the wake of a cheapie one from Simitar) with the usual Omega-centric extras including a boatload of trailers. Of course, it was inevitable that this would hit Blu-ray sooner or later, and that came to pass in 2020 from Arrow Video complete with a gorgeous scan from the original camera negative that makes this film look a whole lot more vibrant and impressive than before. Audio options include the original English 2.0 track and a reasonably solid 5.1 option that gives the music plenty of extra heft in the front and rear speakers. Optional English SDH subtitles are also provided along with Greek subtitles. A new audio commentary (recording during the COVID pandemic) features Little conversing with Red Shirt Pictures' Michael Felsher about his early career, his L.A. connections at the time, the involvement of Mastorakis, and the extreme celebrity of one of his 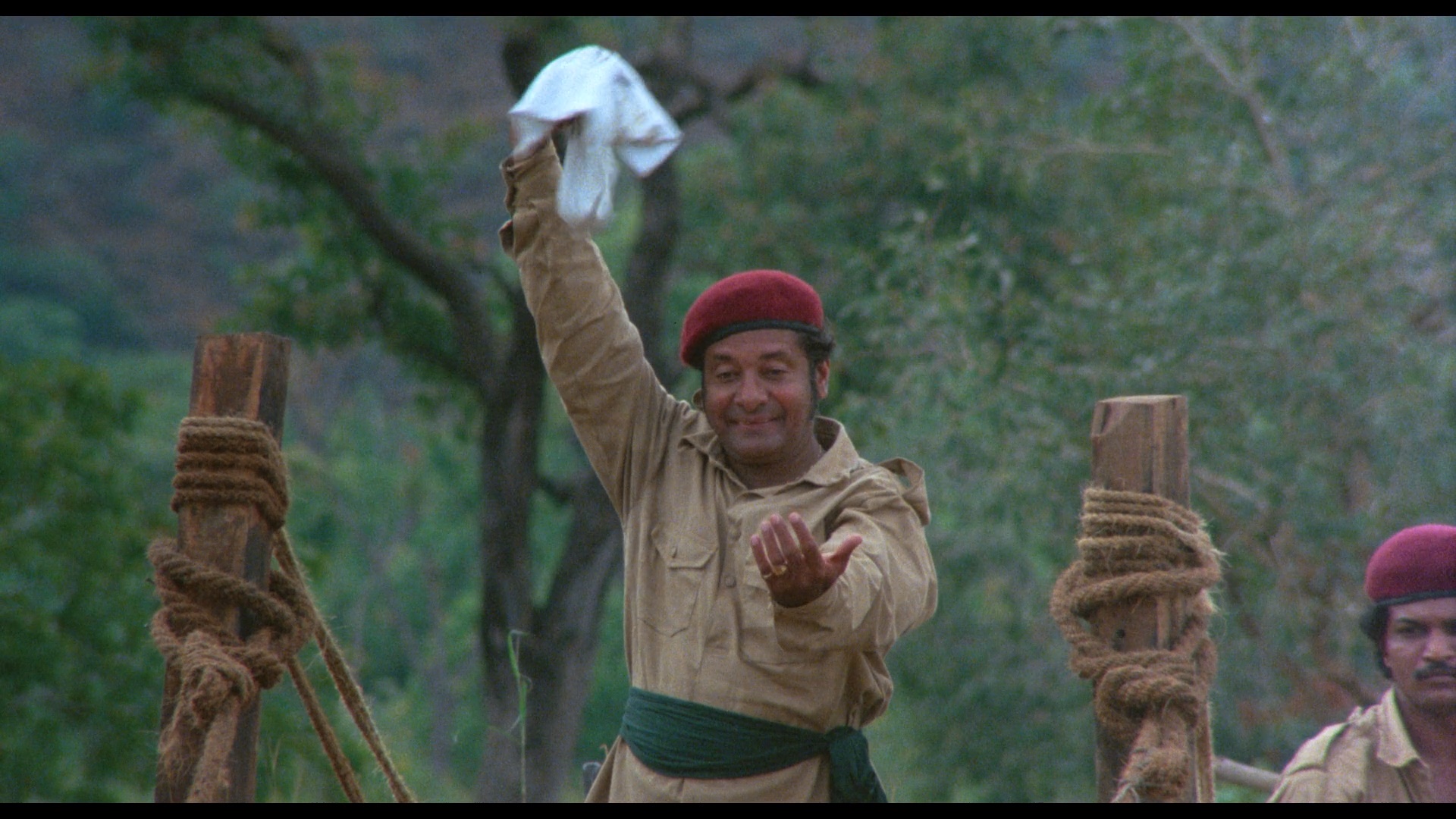 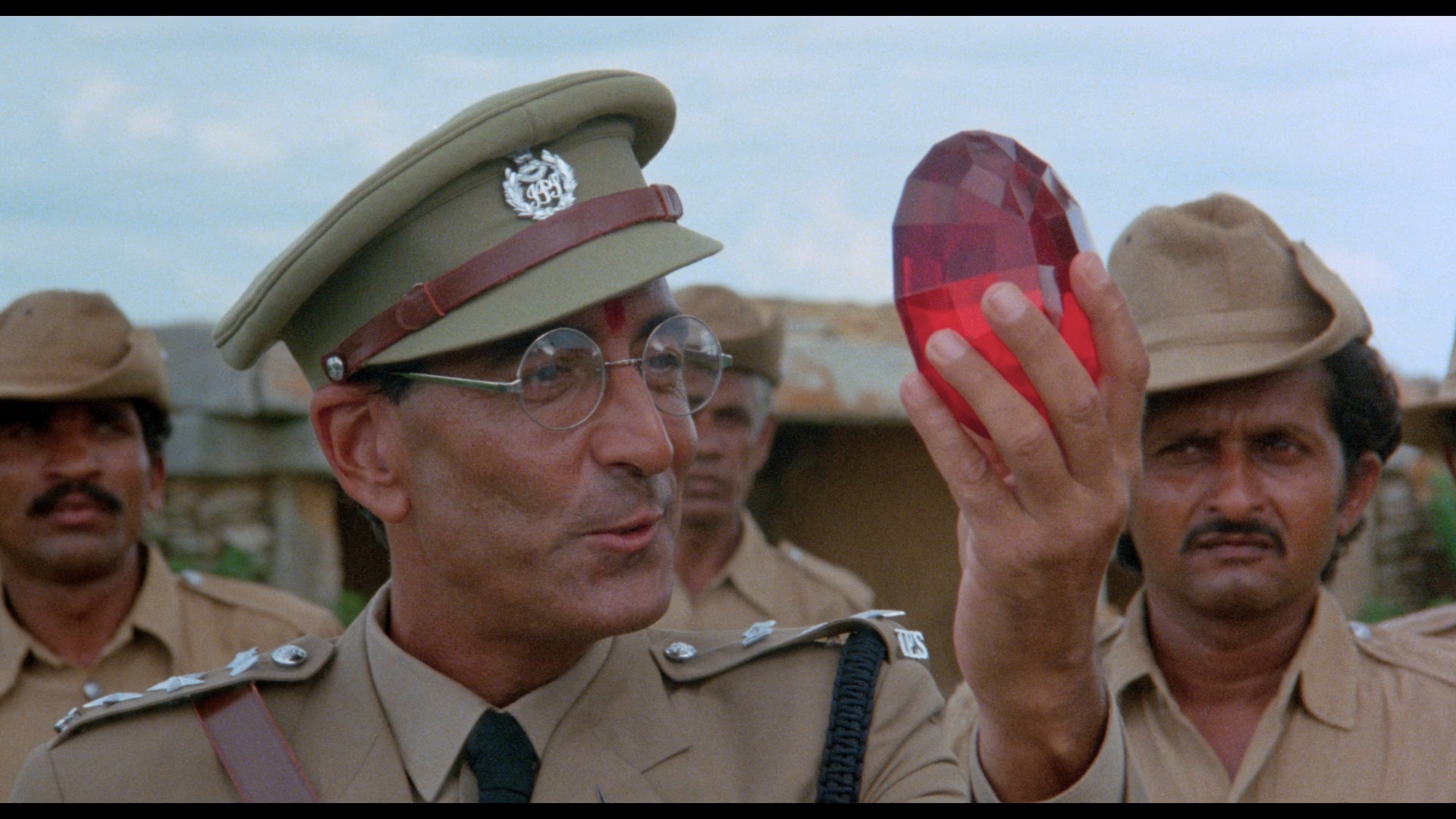 also confirms that Stimely was dubbed afterwards but doesn't confirm the tale that the voice was that of David Soul. Then entertainment journalist Bryan Reesman presents a very fast-paced second commentary track and goes solo as he touches on some funny anecdotes from the production, the action-adventure tropes of the era, the novelty of a Western film shot in India at the time, and various stories told by the cast and crew. In the new "Keeping It to Myself" (28m31s), Mastorakis appears for an interview about the film (shot under poor audio conditions also during the pandemic), the making of Glitch! and Sky High right before this, the way he ended up recruiting Little, and the Indian producers he worked with on the film, all sprinkled with lots of clips. The most illuminating extra here is easily "From Bollywood to Bloodstone" (22m), an in-depth look by Josh Hurtado at the career and importance of Rajinikanth, whose career spanning over four decades has made him one of South India's most legendary stars with a colorful, movie-loving past that seemed to make his path to stardom inevitable. The original trailer is also included along with a 2020 reissue one for Arrow, and an image gallery features an assortment of 29 stills. The original screenplay can be accessed via BD-ROM, and the package also comes with a new cover design by Graham Humphreys (with the traditional video art on the reverse side) as well as an insert booklet (in the first pressing only) featuring liner notes by Mark Cunliffe.