Better known to late night television fanatics as the more lurid Scream of the Demon Lover, this by-the-numbers gothic potboiler is a barely disguised rehash of Antonio Margheriti's splendid Virgin of Nuremberg with a few dashes of Jane Eyre thrown 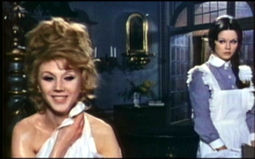 into the second act for good measure. A Spanish-Italian co-production, Blood Castle crams in plenty of spooky atmosphere, torture chamber nightmares, a Roger Corman-style climax with fistfights and a raging inferno, and a marauding, disfigued monster, but don't expect anything out of the ordinary for European horror fans.

Beautiful blonde Ivanna (Strip Nude for Your Killer's Erna Schürer) arrives by carriage at the forbidding estate of Janos Dalmar (Carlos Quiney) to lend her biochemical aid to his recent experiments. The staff at the castle proves less than forthcoming with details about the Baron, who wanders around with large guard dogs and dodges the subject of the gruesome murders of local town girls. Meanwhile the maids scamper around in a variety of sexual shenanigans, and Ivanna suffers from nightmares in which a scarred visitor gropes her nightgown and ties her naked to a rack. As Ivanna and the Baron fall in love, she begins to suspect that perhaps he may not be the only man roaming around their home at night... 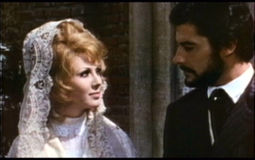 Perhaps due to its Spanish origins, the explicit horror content of Blood Castle is fairly low compared to its Italian bretheren of the same period; the film runs considerably longer than average and seems padded with lots of extraneous dialogue and shots of characters wielding candelabra wandering down hallways. Director Merino (who reteamed with Quiney for the more effectively paced The Hanging Woman) at least realizes he has a commercial project on his hands and sees that an actress loses her top every ten minutes or so to keep the audience's interest. (One of the lovely ladies includes '70s cheesecake starlet Agostina Belli, who went upscale, sort of, with Bluebeard, Revolver, and Profumo di Donna.) 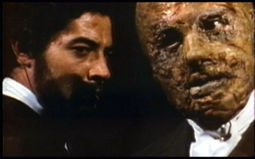 Retromedia's DVD has been transferred from a fairly battered but colorful print, with black levels ranging from satisfactory to wildly unstable. At least it's vastly superior to the earlier DVD double feature from Triton, which paired this up (under the Demon Lover title) in a hideous, almost color-free transfer with Mario Bava's Hatchet for the Honeymoon. Framing-wise the two DVDs are fairly similar; the Retromedia disc is barely windowboxed as well and skims off a little extraneous information from the top and bottom, while the full fram eTriton transfer is slightly squeezed. Both are uncut, containing all of the nudity and mayhem shorn from other video versions which ran as short as 76 minutes. The Retromedia disc includes a combo trailer (when this was paired up by New World with The Velvet Vampire) and solid liner notes by Mirek Lipinski.