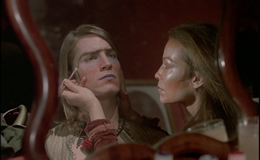 Easily the strangest film in the career of director Louis Malle, the surrealistic fantasy Black Moon arrived squarely between the filmmaker's two acclaimed French-language features earlier that decade (Murmur of the Heart, Lacombe Lucien) and his brief but acclaimed stint in Hollywood which resulted in Pretty Baby and Atlantic City. Exactly how a film featuring talking rats and unicorns is anyone's guess, but you will never, ever see another film like this again. 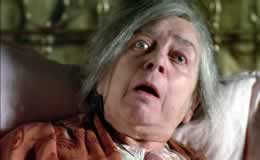 In an unspecified time and place, a young woman named Lily (Harrison, from Jacques Demy's The Pied Piper and Robert Altman's Images, which also features a unicorn obsession) drives through a battle-scarred countryside where men and women are killing each other en masse. Lily takes refuge at a farmhouse populated by naked wild children, a mute groundskeeper (Dallesandro) and his sister (Day for Night's Stewart) whom she both also deduces are named Lily, and their elderly mother (Giehse) who communicates through a radio with a special talking rat sitting on it. The mother seems to die suddenly but then comes back to life, while Lily becomes fixated on a shaggy brown unicorn living in their barn. 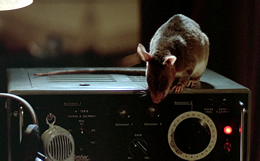 Briefly released in America by Twentieth Century Fox to utter confusion and almost immediate oblivion, Black Moon began to amass a cult following due to its extreme rarity and favorable mentions in a number of publications, including a tantalizing review in Shock Cinema. Eventually a new master was created and released on DVD in Europe and Australia, either in its original English-language version or the French dub with English subtitles. Both versions have their pluses and minuses; the English track is obviously in synch most of the time and features Harrison's original voice, but it's an oddly flat mix that was most likely created in post. On the other hand, the French track has a more quirky, lyrical quality that gives the film a different, Jean Rollin-style atmosphere that may be more to the target audience's 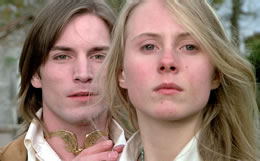 taste. Much of the film still doesn't make much sense in either incarnation, but its slippery, dreamlike quality (aided by restrained but evocative cinematoraphy by Ingmar Bergman regular Sven Nykvist) creates most of its charm. Much of the film's publicity referred to it as a surrealist's take on Alice in Wonderland, a story that's been tweaked by several European filmmakers with bizarre results. (In fact, Claude Chabrol did his own adult spin on the story two years later with Sylvia Kristel in the excellent, little-seen Alice ou la derniere fugue). The Lewis Carroll connection is actually pretty thin; apart from a young girl propelled through a series of bizarre and possibly imaginary scenarios, the film is really a standalone concotion.

Since its resuscitation on video, Black Moon has been treated pretty well in recent years (including the UK version available in the second volume of Optimum's Louis Malle series) and even became something of a regular staple on American cable TV on various channels like Sundance and even Showtime after its acquisition from Home Vision. The HD master used for the Criterion release on both Blu-Ray and DVD is a stunner, not surprisnigly, with the former looking razor sharp and utterly beautiful from start to finish. Both language options are presented with optional English subtitles in uncompressed mono and sound equally sharp. Extras include the theatrical trailer (which basically reprises the disturbing opening sequence), a gallery of production stills, a booklet containing new liner notes by Ginette Vincendeau (who wisely doesn't try to explain the film's sybolism very thoroughly), and most notably, a vintage Malle interview from the French program Pour le cinema shorly before his excursion to Hollywood. Though certainly not a film for everyone, Black Moon will blow your mind if you just sit back and enjoy the ride.