When her mother dies during a seance, young 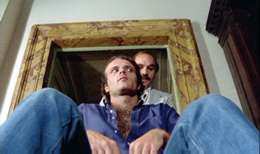 Myra (Dupré) and her kin are alarmed when the body twitches on its slab in the family crypt. The attending physician tells them not to worry, blathering something about it begin part of the mystery of the human body. He ain't kiddin'! Pretty soon Myra is unraveling lots of mysteries within everyone's bodies as dead mom's spirit takes over, leading her to seduce all of her relatives with lots of diabolical results.

If this synopsis sounds familiar, that's becaus this early '80s Italian exploiter (originally titled La Bimba di Satan) is pretty much a remake of Malabimba made three years later by the unrelated Mario Bianchi. Giordano returns again this time as a potential savior figure and once again gets a steamy lesbian scene, but this time the story 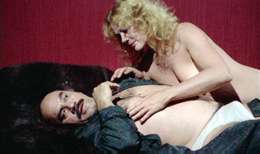 ramps up the horror quotient considerably (with lots of crypt scenes and even a mummy!). There's no way it could be trashier than the original thanks to the absence of porn inserts this time out, but the filmmakers certainly give it the old college try with lots of T&A, plenty of claustrophobic atmosphere and some truly weird flourishes like the paraplegic uncle (now played by a much younger actor) getting a naked washdown from the nun right in the middle of the family drawing room and the burly family patriarch getting chased fully naked in an open bathrobe to his doom (a scene repeated almost identically with even less appetizing results by Frank Langella in Lolita). 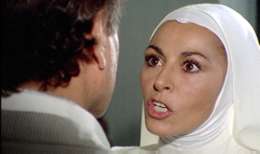 The whole thing runs a very tight 74 minutes, with Bianchi barely pausing to deliver a coherent plot. The strongest aspect, however, is the killer psychedelic score by Nico Catanese (who?), a terrific slice of post-Goblin rock that demands its own soundtrack release.

Pretty much impossible to see (let alone in English) since its release, Satan's Baby Doll also benefits considerably from Severin's sleek digital treatment. The transfer looks very nice indeed to perfectly capture each crumbling sarcophagus and exposed inch of flesh, with clear optional English subtitles. Extras include the rather good Italian theatrical trailer and "Exorcism of Baby Doll," an 18-minute video interview with Bianchi in which he talks about putting his own spin on the story and his rationale for dealing with the heavy amount of coupling in the script. Watch 'em both back to back for the maximum damning effect.

For die-hard Eurotrash fanatics, there's also an X-Rated Kult DVD from Germany containing an alternate hardcore cut of the film (under the ridiculous title of Dr. Porno und sein Satanszombies but credited onscreen as Orgasmo di Satana). It's in much rougher shape and has no English-friendly options, as well as completely different opening titles; however, it also has tons of extra sex footage including a lesbian pre-titles routine, some unsimulated oral activity with the paraplegic uncle and Marina Hedman, additional Hustler-style solo shots of Giordano, and, of course, some full-on inserts. None of it adds much to the film, really, but it is a curious variation all the same.