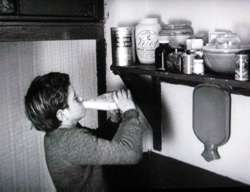 The bildungsroman, or coming-of-age novel, has been a staple of literature for centuries, but its importance in filmmaking has been far more minimal. Nevertheless, a few filmmakers made their careers by finding young actors capable of carrying their visions of growing up onscreen through one film or, in lucky cases, an entire series, most famously with Francois Truffauts Atoine Doinel cycle (beginning with The 400 Blows) and Sanjit Rays Apu trilogy. Only in recent years has Scotlands most important contribution to this cycle from director Bill Douglas been truly appreciated; his first three films  referred to in their home video incarnations as the Bill Douglas Trilogy  are stark and sometimes harrowing autobiographical tales hovering around the one-hour mark, with lead actor Stephen Archibald playing his stand-in Jamie with a power far beyond his years. 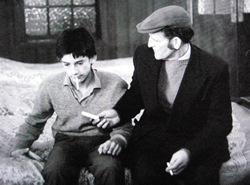 Unfortunately Douglas completed only one more feature film, the underappreciated epic Comrades, before becoming a film professor and passing away in 1991.

Funded by the British Film Institute, My Childhood became a critical and festival favorite as it depicted the impoverished upbringing of Jamie and his brother, Tommy (Restorick), while living with their grandmother in a post-World War II Scotland mining town as their mother has been committed to an asylum and their father is away for work. A chance encounter with a displaced German soldier forces Jamie to confront his situation without a real parental force in his life, which directly leads into the next film, My Ain Folk. Here the two brothers are split apart by the death of their grandmother, with Jamie going to live with his father and another, far less welcoming grandmother; meanwhile Tommys miserable stint in a childrens home forces him to reconsider his destiny as well. Finally the boys begin 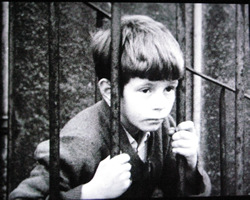 to enter maturity with My Way Home, as a homeless Jamie enlists with the RAF and becomes inspired to seek a more artistic direction in his life thanks to the influence of a fellow officer. Best viewed as a continuous experience, the three films are hardly traditional feel-good experiences, but Douglas considerable visual gifts and ability to convey his story with only a few quick strokes of dialogue makes these intensely filmic experiences 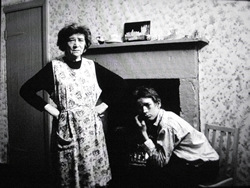 An American edition of the trilogy appeared from Facets in a passable but soft-looking DVD edition, but the BFI version (on DVD and Blu-Ray) transferred from the original vault negatives is really the only way to appreciate all three of these films. Obviously the first film (shot in 16mm) is limited by the low budget and limitations of the film stock, but it still looks quite impressive in the street and landscape shots which deliver a surprising amount of detail. The other two look quite excellent throughout with pin-sharp imagery and very clean presentations making them an utter joy to watch. Optional English subtitles are also provided, which can be quite handy for some of the accents.

The BFI release also contains a bonus DVD of supplements including the one-hour Bill Douglas: Intent on Getting the Image documentary from 2006, a 1970 Douglas student short entitled Come Dancing, a brief four-minute interview with the director from the BFI vaults, and a 32-page illustrated booklet containing notes by Peter Jewell, John Caughie, Matthew Flanagan, Louis C. Milne, and Sean Martin.