The romanticizing of doomed romance reached new heights with Betty Blue, an oddball epic romance from the always unpredictable Jean-Jacques Bienix. After getting off to a 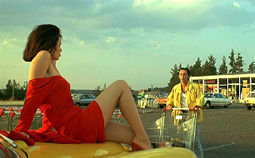 roaring start with the internationally acclaimed Diva (1981), Bienix misfired badly two years later with the visually stunning but overbaked The Moon in the Gutter. Three years later he returned to form with Betty Blue (or 37°2 le matin in its native country), which became a cult hit around the world and racked up an impressive number of award nominations despite mixed reviews. Alas, the gifted director's career has mostly stalled since, as he's taken years on end between films and turned out such erratic but occasionally interesting projects as Roselyne and the Lions, IP5, and Mortal Transfer, none of which played very widely outside of France and occasional U.K. art house showings.

So what are we to make of this uneven talent's magnum opus? Clocking in at three hours, the 1991 "version integrale" of Betty Blue runs nearly one hour longer than the version which originally played theaters and miraculously earned an R rating in the 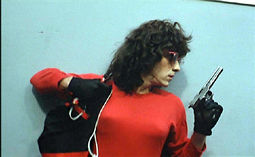 U.S. despite an avalanche of full frontal nudity and graphic, sweaty sex scenes. Another Continental meditation on amour fou, the story concerns two passionate but unstable lovers, Zorg (La Femme Nikita's Jean-Hughes Anglade) and Betty (former model Beatrice Dalle in her film debut). A handyman who lives in one of the seaside cottages to which he attends, Zorg dreams of becoming a writer and spends his nights clacking away at the typewriter. Betty can't stand Zorg's boss, and things eventually come to a head when she sets the cottage ablaze. Despite Betty's already dubious behavior, the two move to the city where Betty and Zorg pick up odd jobs and restaurant work. She belives Zorg can get his book published and even agrees to type out his massive manuscript; alas, editors are less than receptive to his novel, and Betty is unable to cope with rejection and the harsh realities of life. Determined to help his true love hold on to sanity, Zorg resorts to extreme behavior on his own part to keep them together.

Simply put, the brave performances of the two leads are what really keeps Betty Blue together. Bienix's tendency to go flying off on wild tangents is more than evident here, particularly in the final third which finds Zorg dressing up in drag for a crime spree in an odd grotesque/comic high point not easily forgotten. Obviously the film is destined for a tragic finale, but despite this predetermined path, the stars keep the viewer connected to their behavior and Bienix's ravishing 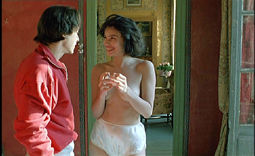 compositions and lighting schemes make it all quite palatable even when self-mutilation enters the picture. The extra hour of footage certainly deepens the performances (and adds more nudity and borderline hardcore material to the already steamy proceedings); whether this qualifies Betty Blue as a genuine epic will largely be in the eyes of the film's fans.

Like Luc Besson's The Big Blue, this is a film whose word of mouth grew enough to merit an entirely new theatrical release years later in an expanded form; however, Bienix's labor of love has still not really received its due in the U.S. Fox's discontinued transfer presented an acceptable cropped rendition of the subtitled theatrical print, but in France and Britain the film has fared better. The extended version is available in two DVD renditions, one from France (without subtitles but containing some extras, including a video interview with Dalle) and one from Australia (containing optional English subtitles but no extras apart from a doctored French reissue trailer and some sketchy bios). The anamorphic transfer looks terrific, with gorgeous colors which occasionally erupt in blinding bursts of red and blue (appropriately enough). Surround audio is acceptable enough to do justice to Gabriel Yared's quirky, haunting score, a CD well worth seeking out on its own. Thankfully the Australian disc is also region free and extremely affordable, so anyone with a PAL-compatible player should have no problems.