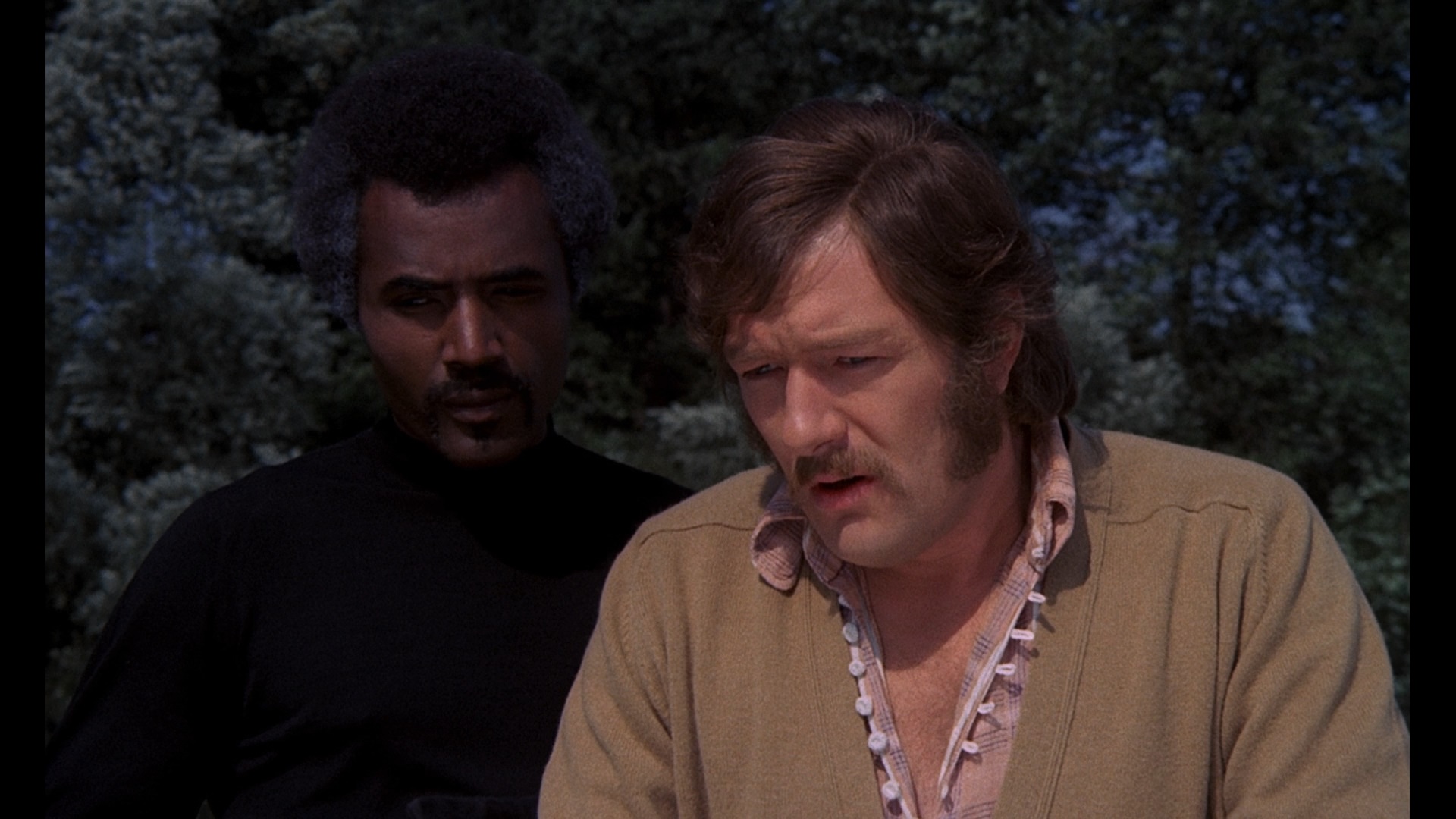 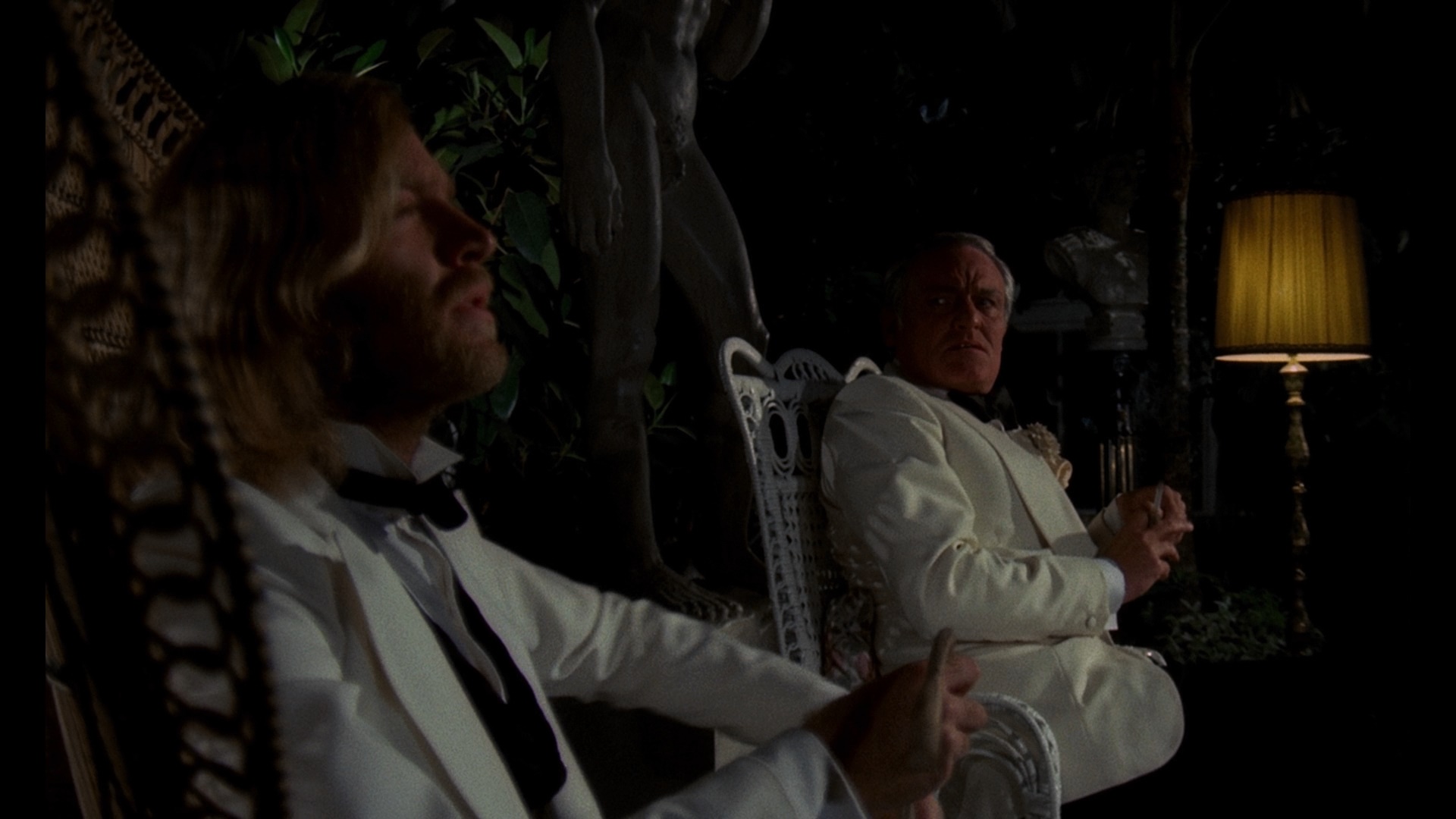 for their outrageous omnibus horror films, Amicus Films occasionally ventured into full single narrative films with decidedly mixed results. The company's last official horror outing, The Beast Must Die, is sort of a shaggy werewolf cross between Ten Little Indians (even cribbing its "Werewolf Break" from a similar gimmick in the '60s version of that Agatha Christie classic) and The Most Dangerous Game; though imperfect, it ranks as one of the studio's more interesting attempts at mainstream acceptance and sports a bizarre cast that can't fail to impress.

Eccentric millionaire Tom Newcliffe (a wildly hammy Lockhart) has devised an ingenious plan to realize his ultimate goal of hunting a werewolf. He's invited six guests along with his wife, Caroline (Ganja and Hess' amazing Clark), to his isolated country estate, which has been outfitted with hi-tech cameras and detection systems. The proceedings are monitored in the control room by Calvin's right hand man, Pavel (Circus of Horrors' Diffring). At dinner Calvin announces that someone at the table is a werewolf; never mind how he determined this, since the plot never bothers to explain it. Could it be occult expert Dr. Lungren (Cushing)? Or perhaps the urbane and vaguely sinister Arthur Bennington (Gray)? Newcliffe explains that the touch of silver is enough to kill a werewolf, so they pass a silver candlestick around the table... to no avail. Perhaps the full moon isn't close enough to expose the furry creature in their midst, but soon murder and mayhem abound. Can you guess who the guilty party is? 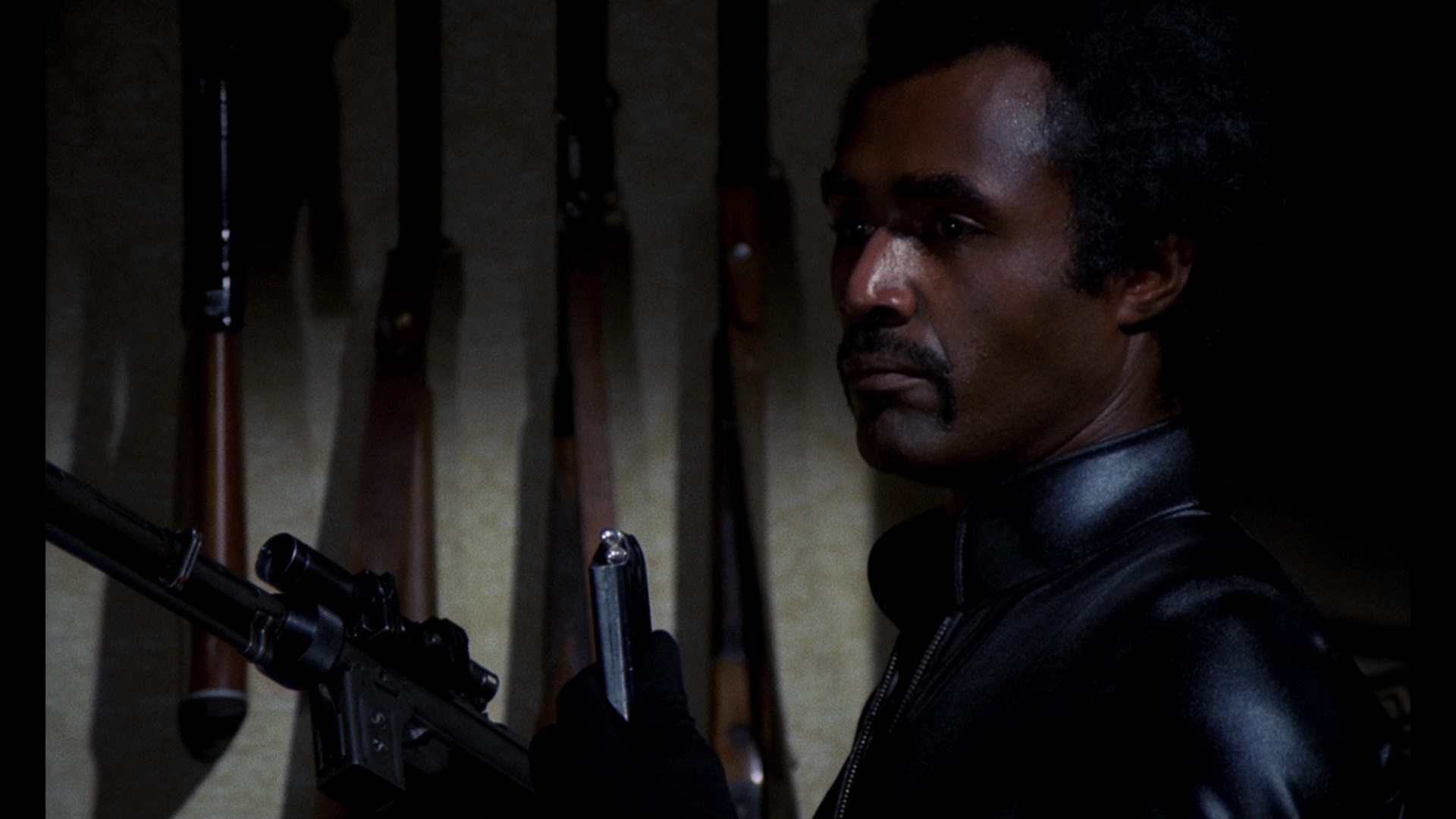 it bears an aesthetic resemblance to some kind of insane made-for-TV movie (no surprise given that director Paul Annett spent the rest of his time on television shows), The Beast Must 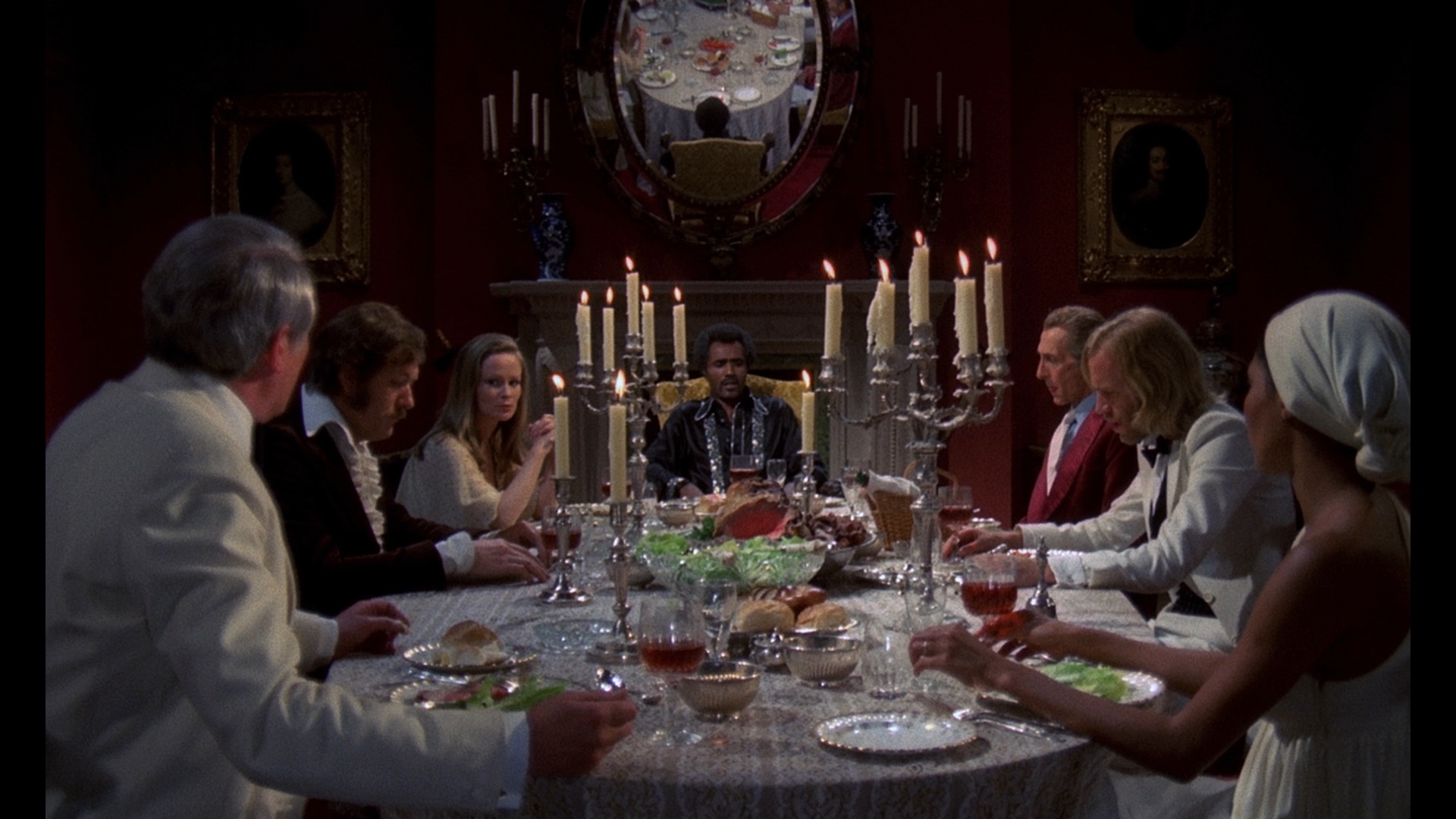 Die earns points for its imaginative roster of talent, including the always-watchable Cushing and a very young Michael Gambon as one of the suspects. While the werewolf's identity is so arbitrary it would even make Kevin Williamson blush, there is one interesting fake-out twist worth catching near the end, coupled with the kitschy but fun Werewolf Break device in the best William Castle tradition. The werewolf itself is mostly limited to brief glimpses of a big dog jumping on people in bad day-for-night lighting, but the killings are brutal enough to make one look back with nostalgia to the days when a PG rating really meant something.

The Beast Must Die has lurked around on video in various versions from Prism and a retitled edition as Black Werewolf, though the blaxploitation angle is tenuous at best. The first 2001 DVD from Image, mildly letterboxed at 1.66:1, contains the full theatrical cut with the Werewolf Break and some throat-gushing gore missing from the TV prints and some VHS releases. The blaring music score right out of Starsky & Hutch sounds fine. For some reason, the much later UK release from Anchor Bay utilizes a vastly inferior full frame print and looks terrible; fortunately, things turned out better the third time around with the second U.S. disc, courtesy of Dark Sky in 2006. Anamorphically enhanced and looking much better than before, this transfer still looks a bit less than stunning (chunky grain and softness abound) but it easily outclasses its rivals. Once again this version is uncut, with all the minor gore intact. Annett pops up on both the AB and Dark Sky versions for a fun audio commentary and a video 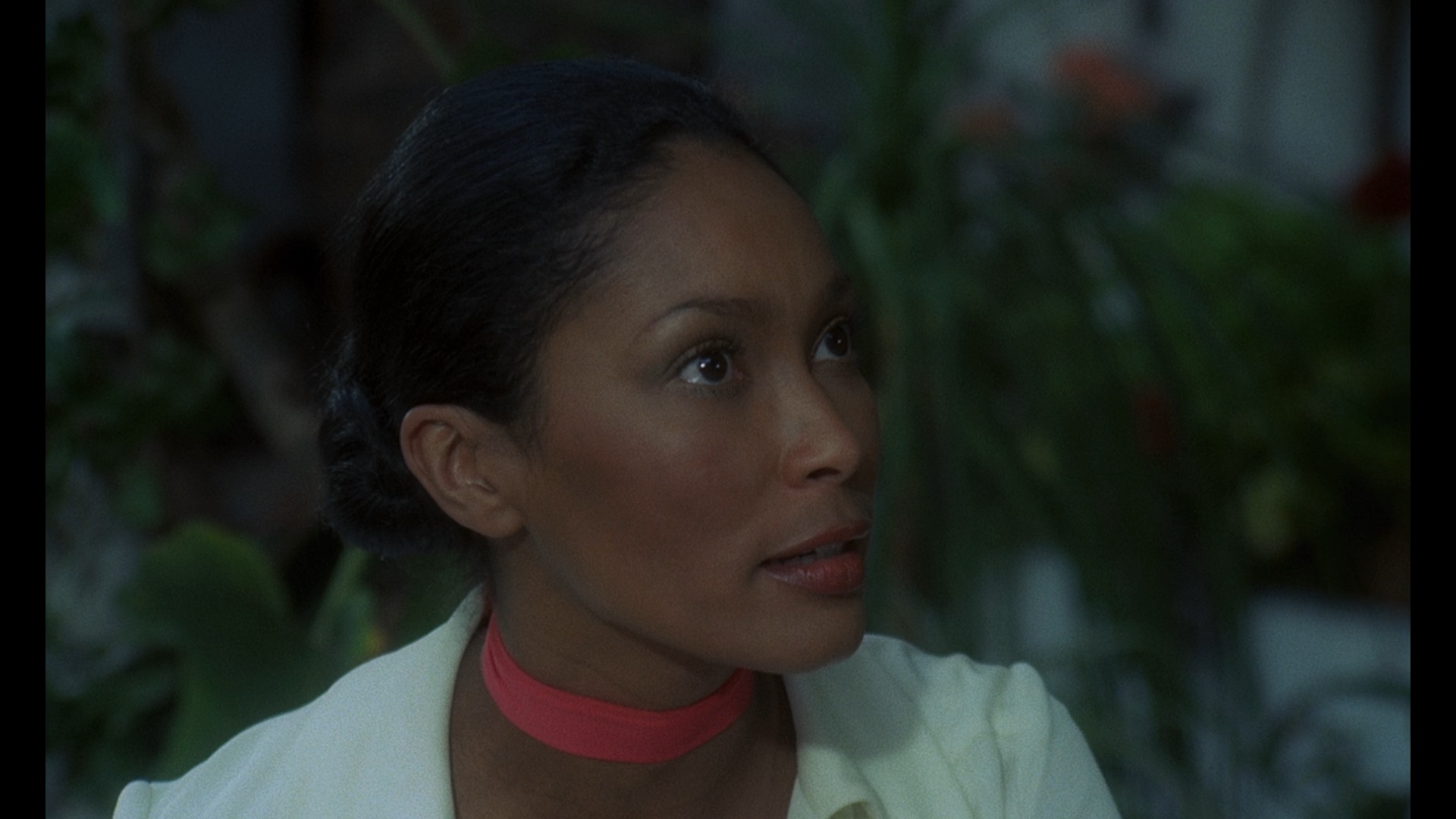 featurette, "Directing the Beast!" (12m58s), in which he talks about various casting options considered for the film and his reaction to certain impositions from Amicus after shooting was completed. Other goodies include that dupey TV spot that's been making the rounds for years, additional promos for Asylum and And Now the Screaming Starts, talent bios (be sure to click that "more" button on the 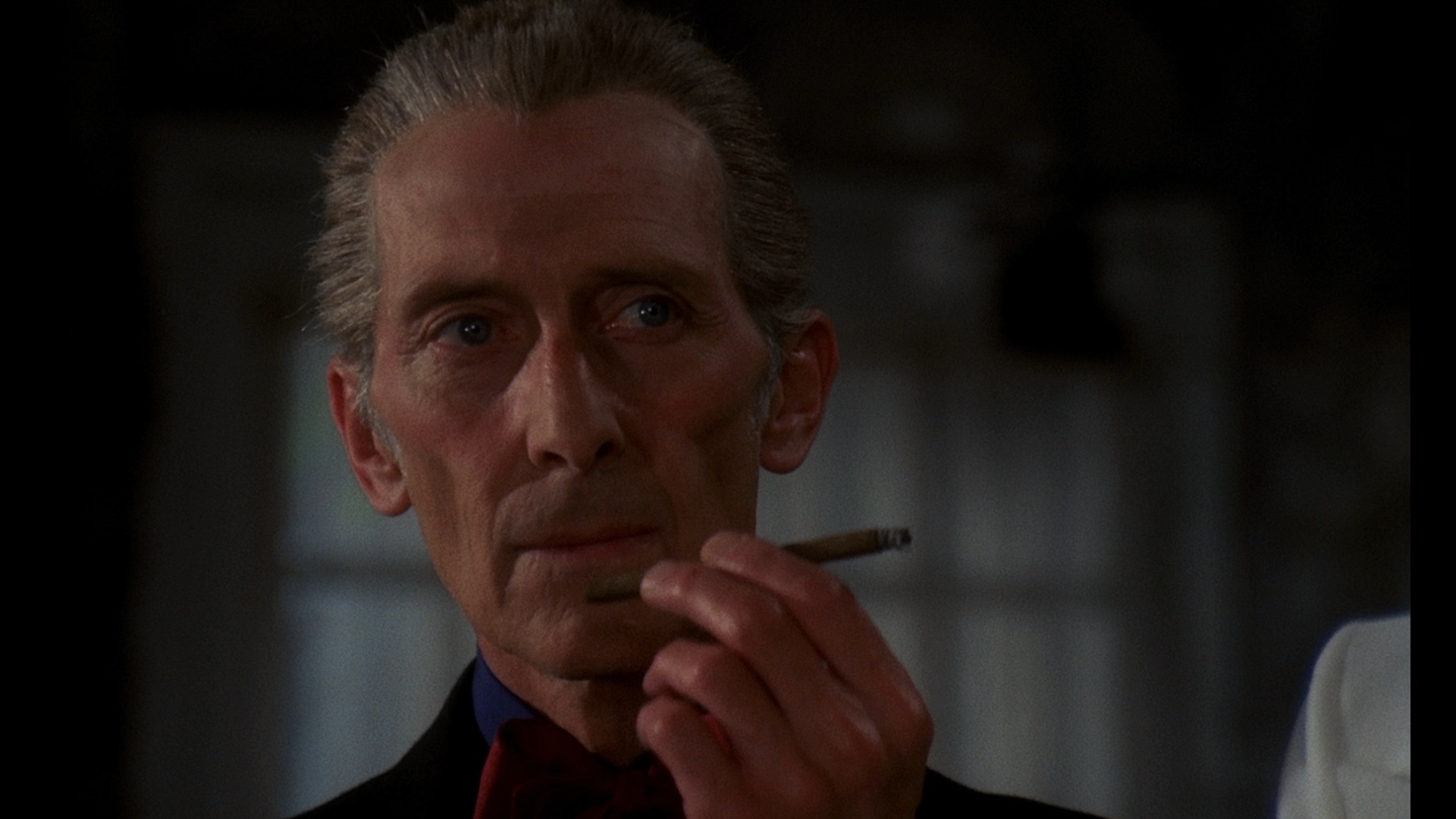 extras page), and a nice gallery.

In 2017, Severin Films brought the film to Blu-ray only as part of a four-disc boxed set, The Amicus Collection, along with And Now the Screaming Starts, Asylum, and a bonus disc of Amicus goodies; click on the Asylum link to read more about the box. The set was also available directly from Severin, including an option with an Amicus book or various related collectible items, though those are long out of print now. The transfer itself turned out to be problematic with lots of diffusion, heavy grain, and softness, exacerbated by the lack of any pre-print materials at the time that could have resulted in a more satisfying presentation. The DTS-HD MA English track sounds fine for what it is (a flat, dialogue-heavy mono track), with an alternate Spanish dub and optional English SDH subtitles as well. The commentary, featurette, and trailer are all here, so you can retire those past versions for sure. A new addition is "And Then There Were Werewolves" (18m35s), a fast-paced video essay by Troy Howarth that spends its opening stretch covering the background of Agatha Christie's Ten Little Indians and its various incarnations before launching into this film's variation on the story and other unofficial takes on the material including two by Mario Bava.

Fortunately better film elements did eventually turn up, and this film got a much needed revisit on Blu-ray with virtually simultaneous releases in the U.S. and U.K. from Severin and Indicator respectively. The transfer (which looks identical on both new releases) is framed at 1.66:1 and bears a Studio Canal logo at the beginning; image quality is drastically improved with more image visible in the frame, finer grain, and a darker, more atmospheric appearance 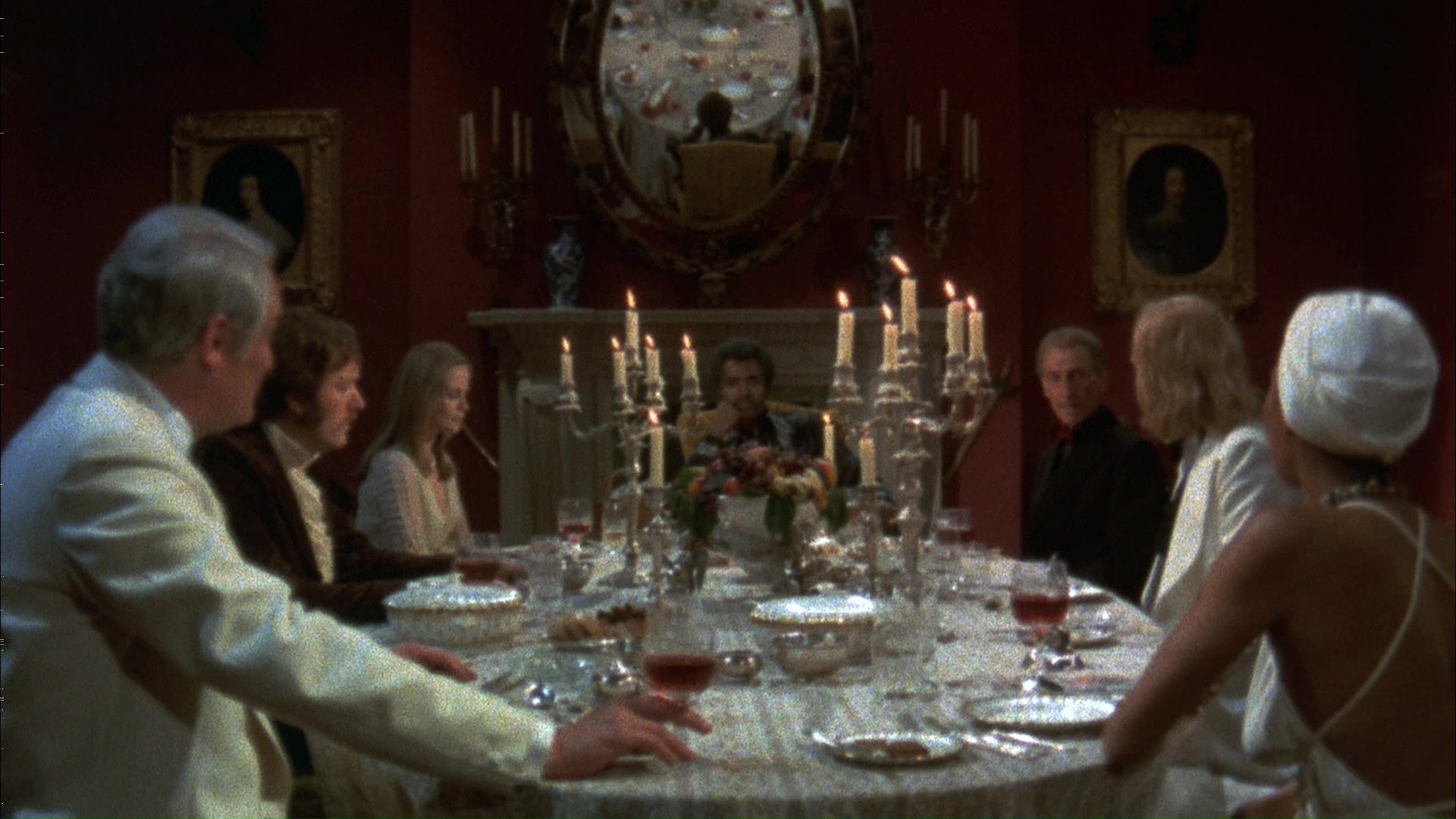 throughout. The English mono track (DTS-HD MA on the U.S., LPCM on the U.K.) sounds 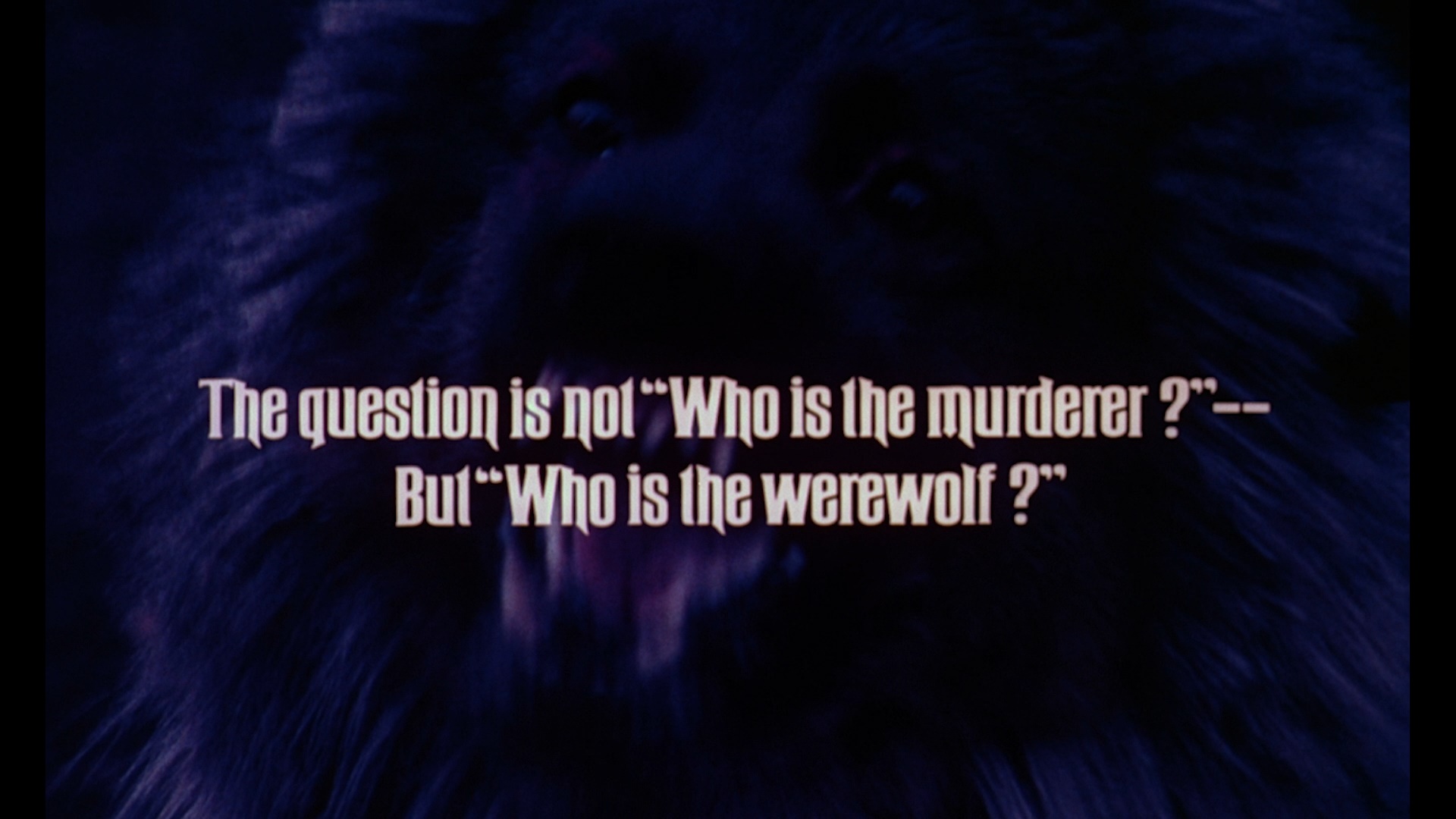 excellent and features optional English SDH subtitles. The Severin one ports over the same extras (Annett commentary, "And Then There Were Werewolves," "Directing the Beast") while adding audio interviews with Amicus' Milton Subotsky (with Philip Nutman) (6m48s) and Max J. Rosenberg (with Sothcott) (47m24s) as well as the trailer featuring optional commentary by Kim Newman and David Flint. Neither of the interviews is especially enthused with the final film, but there's some very interesting material here about the evolution of the script from more of a dark fantasy piece to the whodunit version we have now as well as shortcomings in the direction and, on a more positive note, the color-blind nature of the casting. The Indicator edition (which is limited to 5,000 copies) also features the Annett commentary, the trailer (with optional commentary), and "Directing the Beast," and the Rosenberg/Sothcott audio interview but adds a few new goodies of its own. The film can be played with audio from the British Entertainment History Project interview with cinematographer Jack Hildyard in conversation with Alan Lawson in 1988, and part two of the BEHP interview with editor Peter Tanner chatting with Roy Fowler and Taffy Haines in 1987. Both are valuable, career-spanning histories over the decades to that point with plenty of coverage about the evolution of the British film industry. Stephen Laws provides a brief video intro (3m34s) in which the "horror novelist and Amicus fan" appraises the film as a better viewing experience now than when it first opened; also included are the edited Super 8 version (18m36s) designed for home viewing back in the day (and which speeds through the action so fast the mystery angle is almost entirely gone), plus a very extensive 96-image gallery of stills (including some great Cushing poses) and miscellaneous promotional material. As usual, the insert booklet is not to be missed and features new liner notes by Neil Young, an archival press article on Amicus, an overview of the James Blish short story, a press book piece on Lockhart, and sample critical reviews. Approach this one more as a murder mystery with campy gadgets and supernatural elements rather than a straightforward horror film, and you'll have a good time. 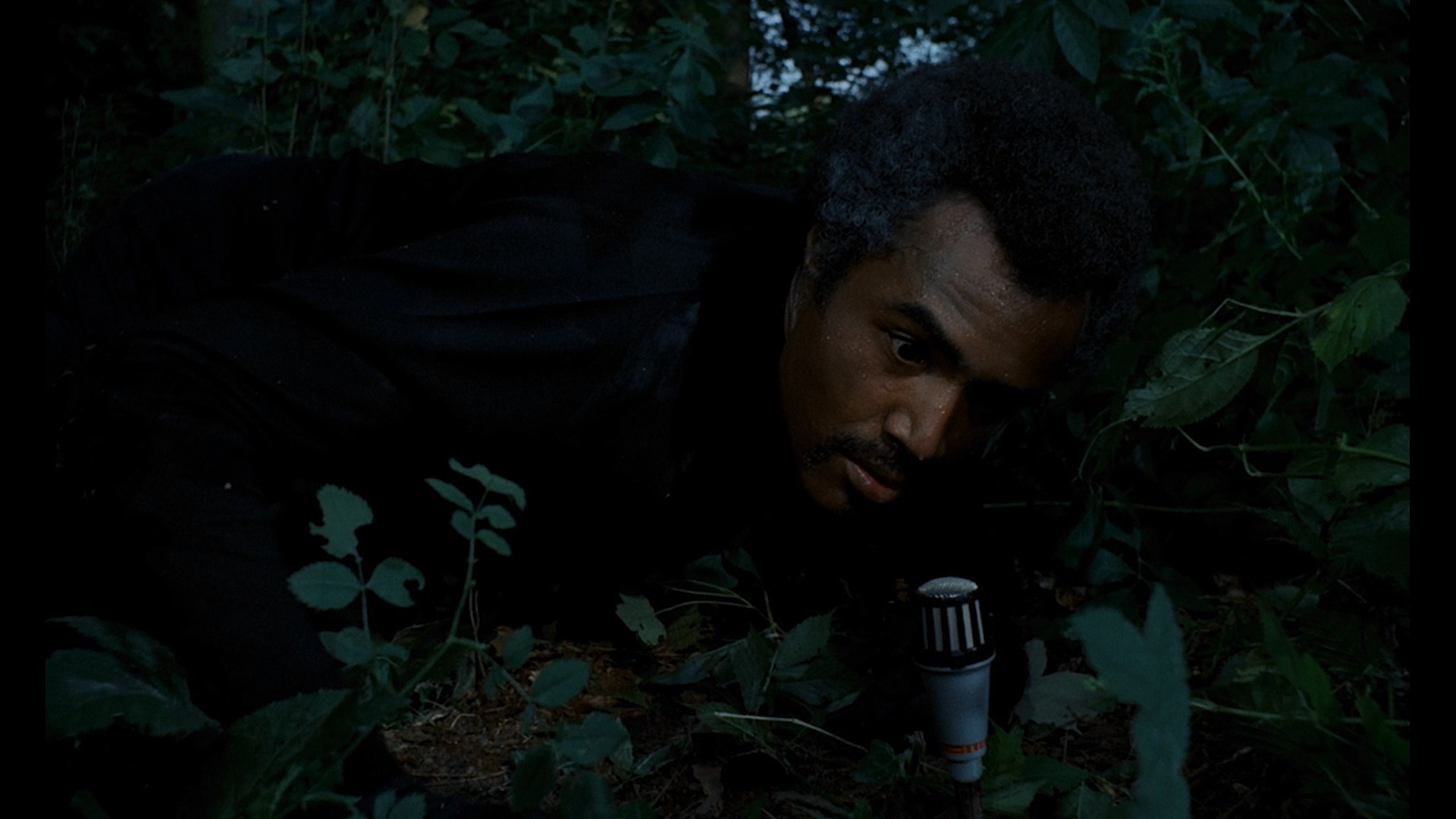 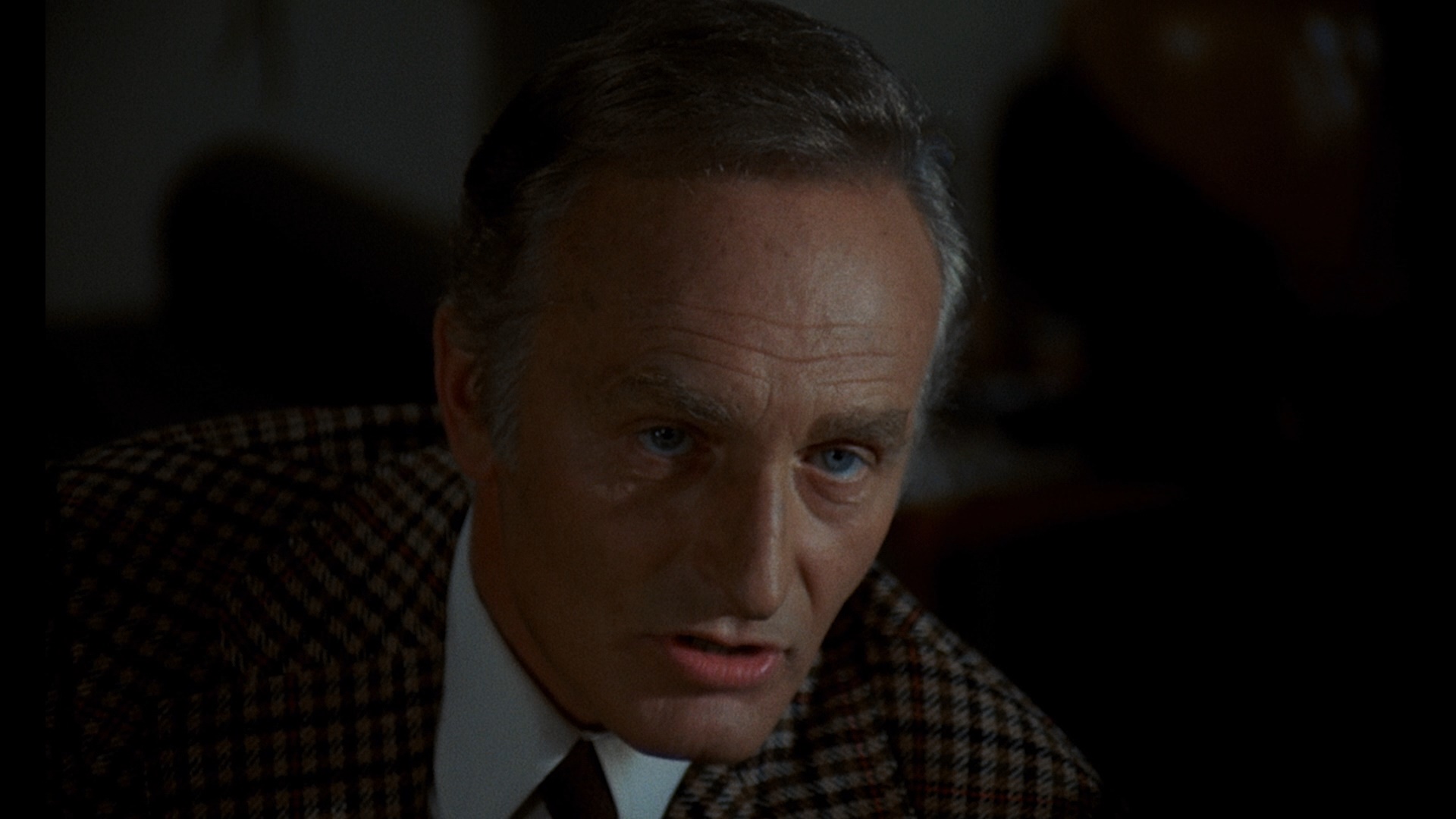 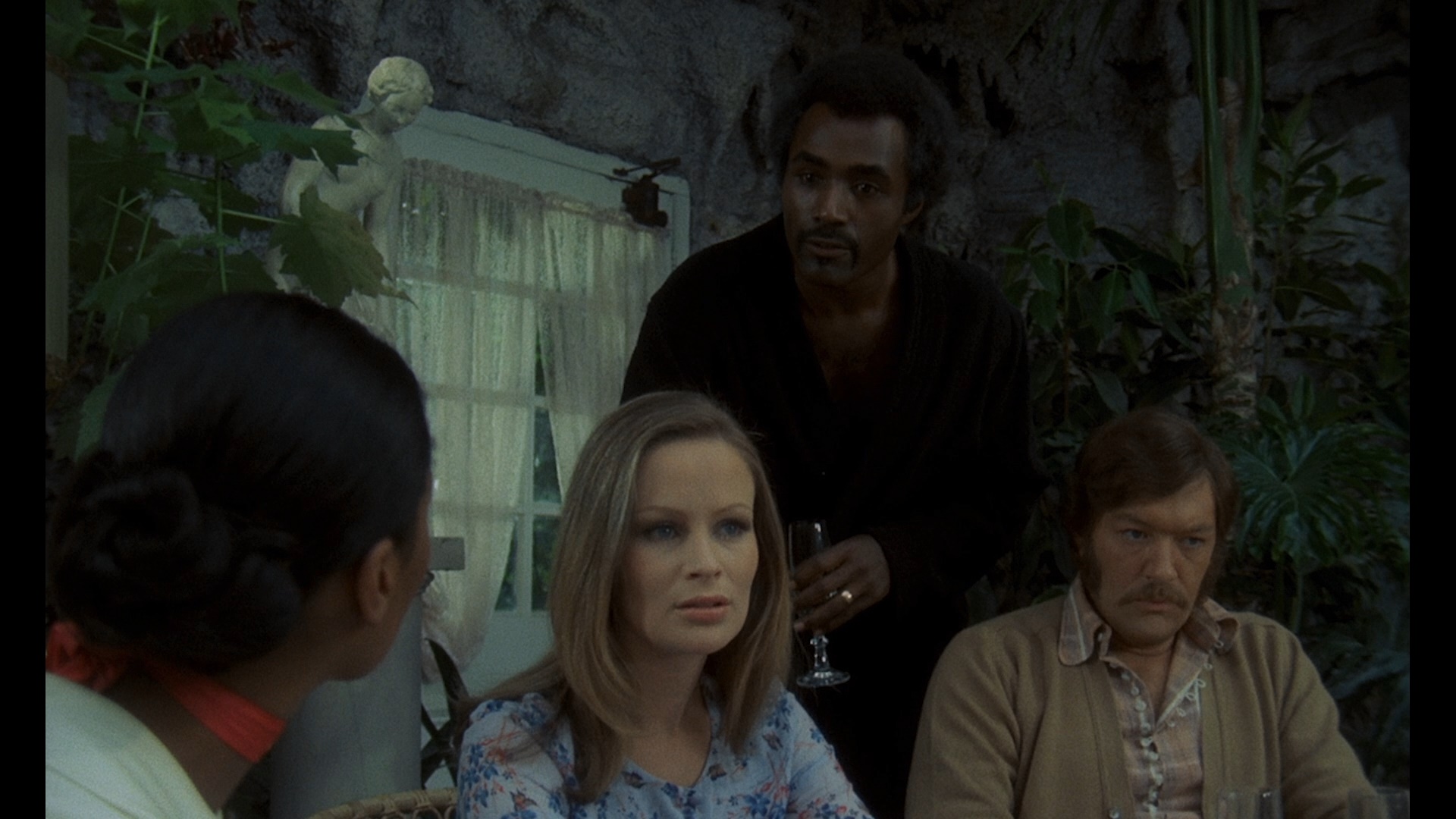 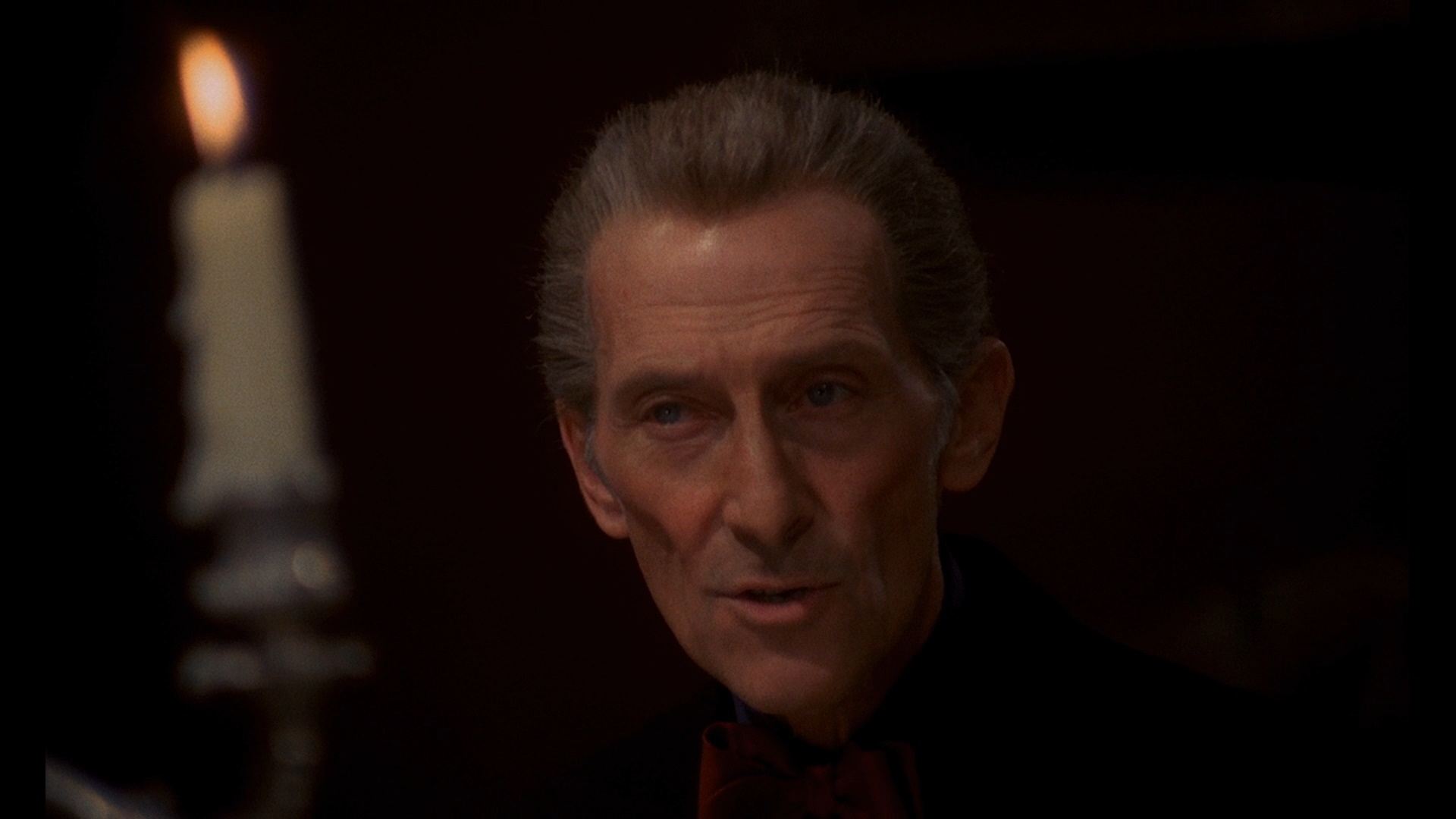 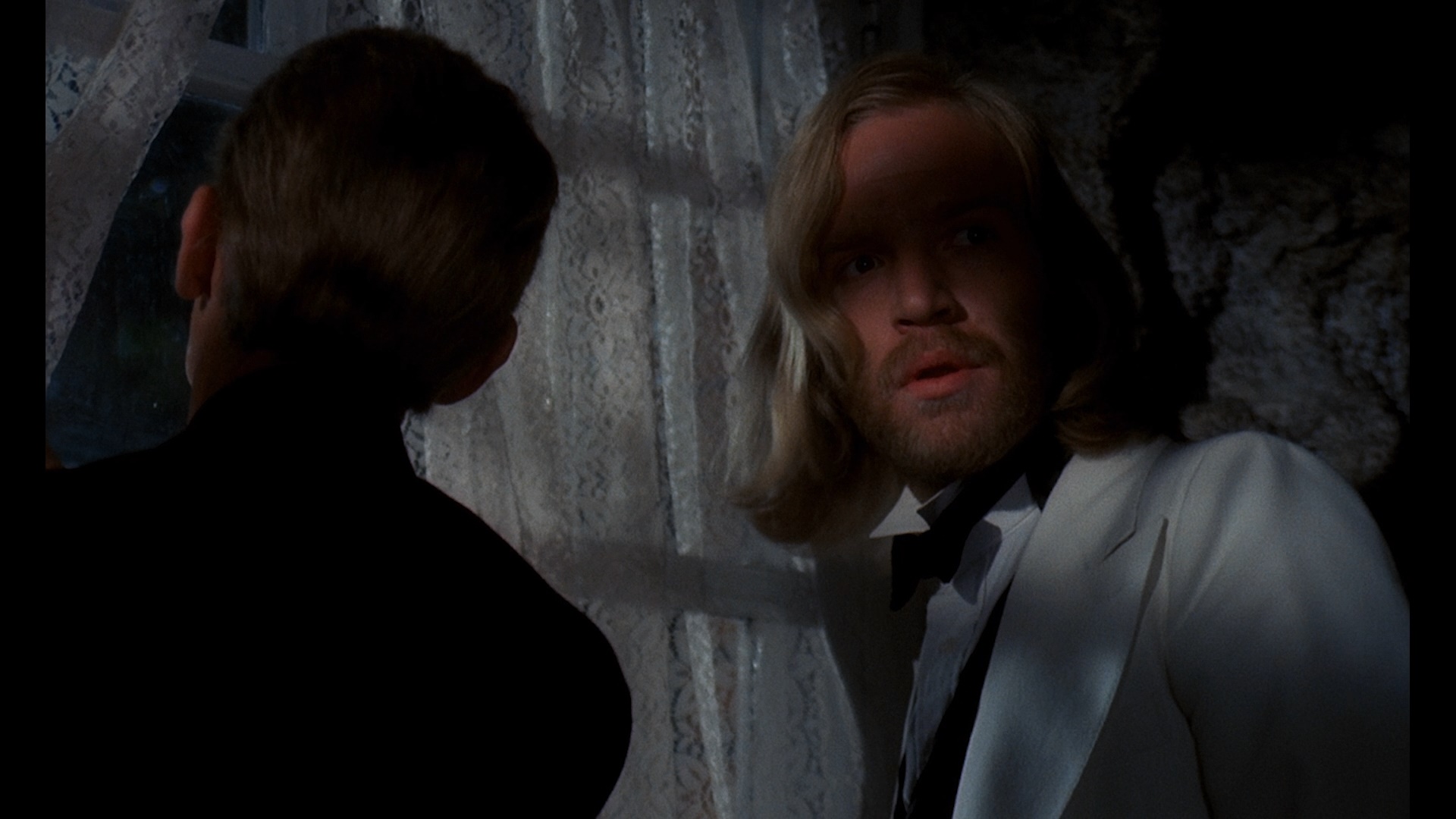 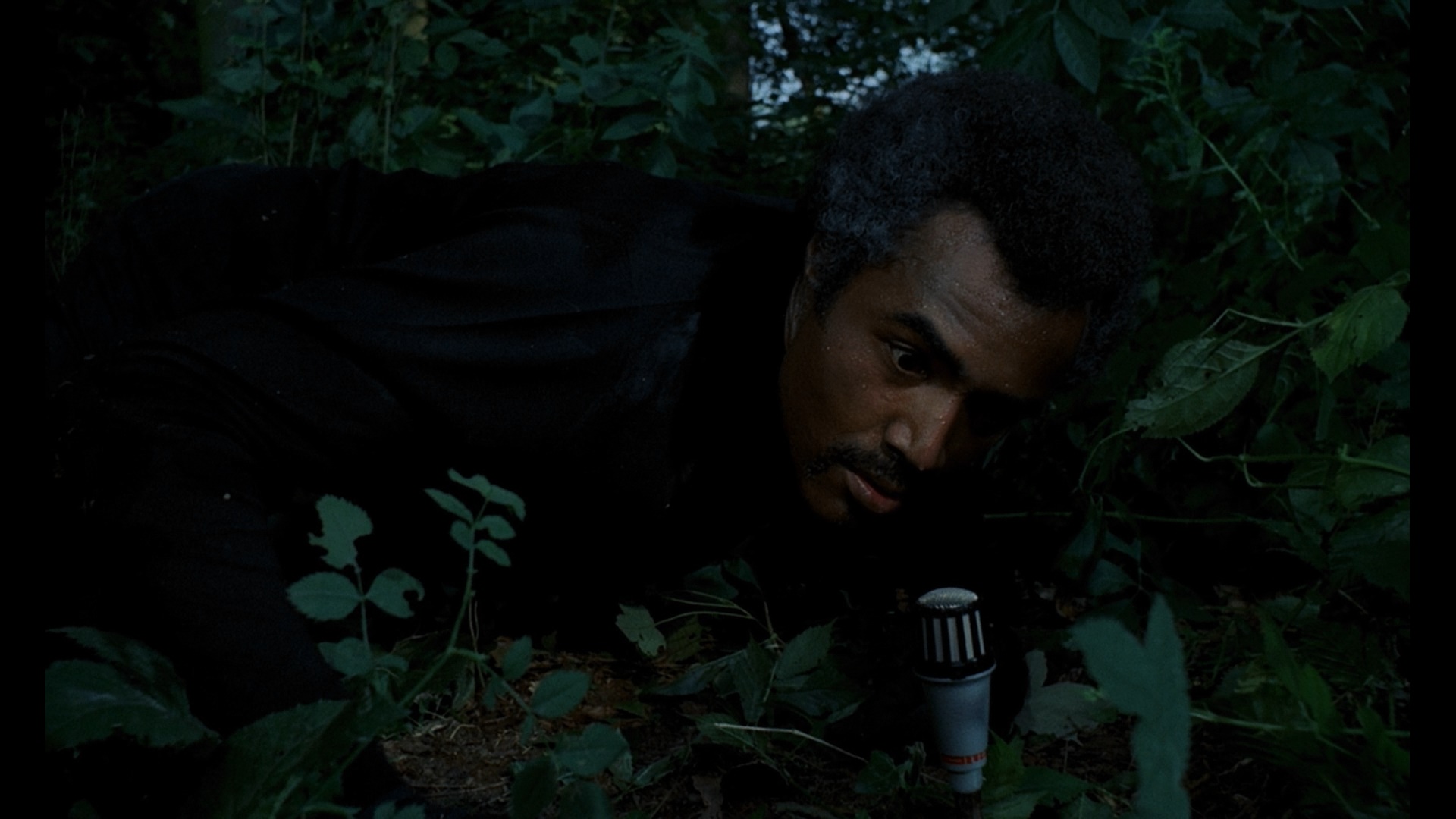 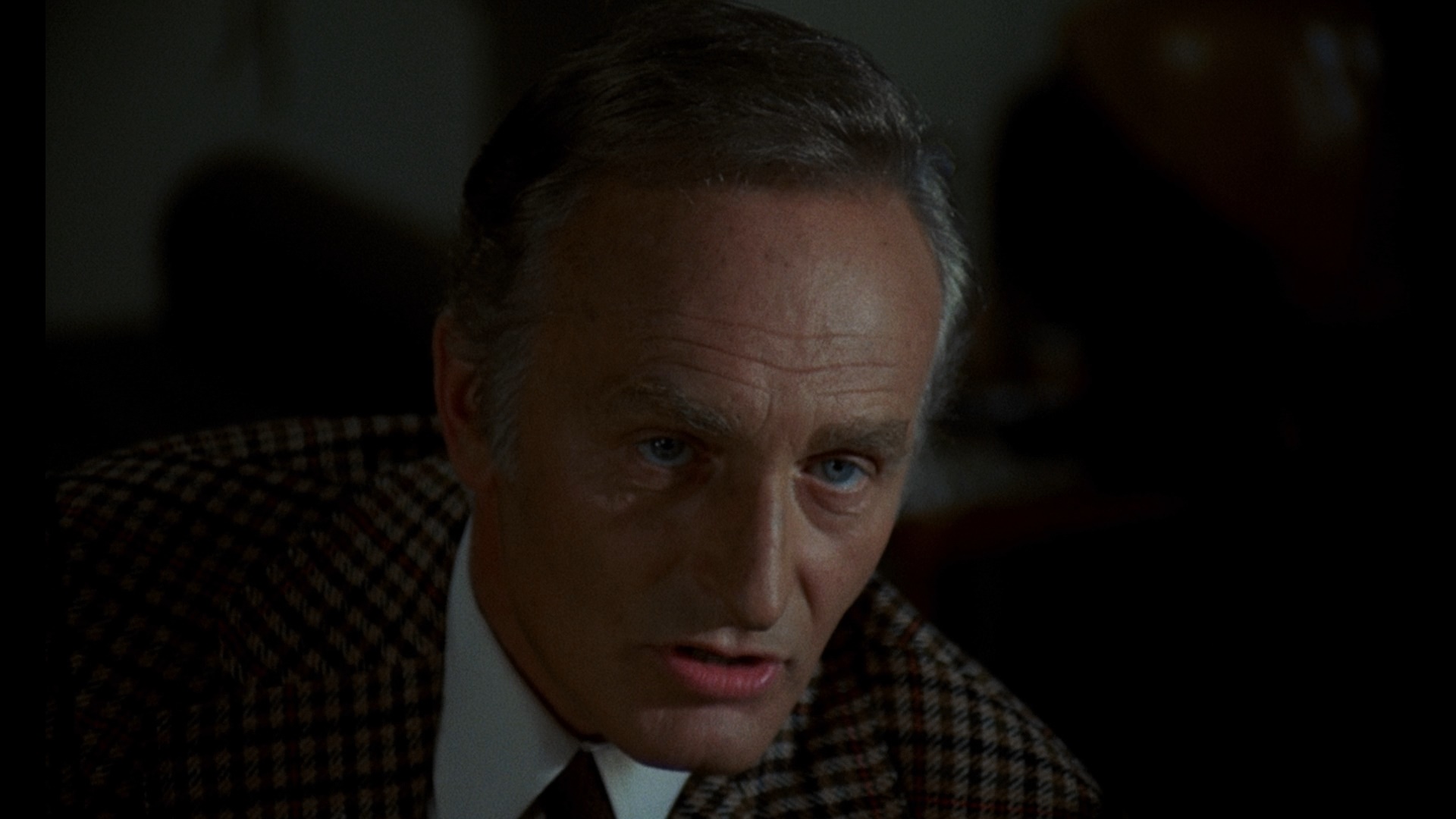 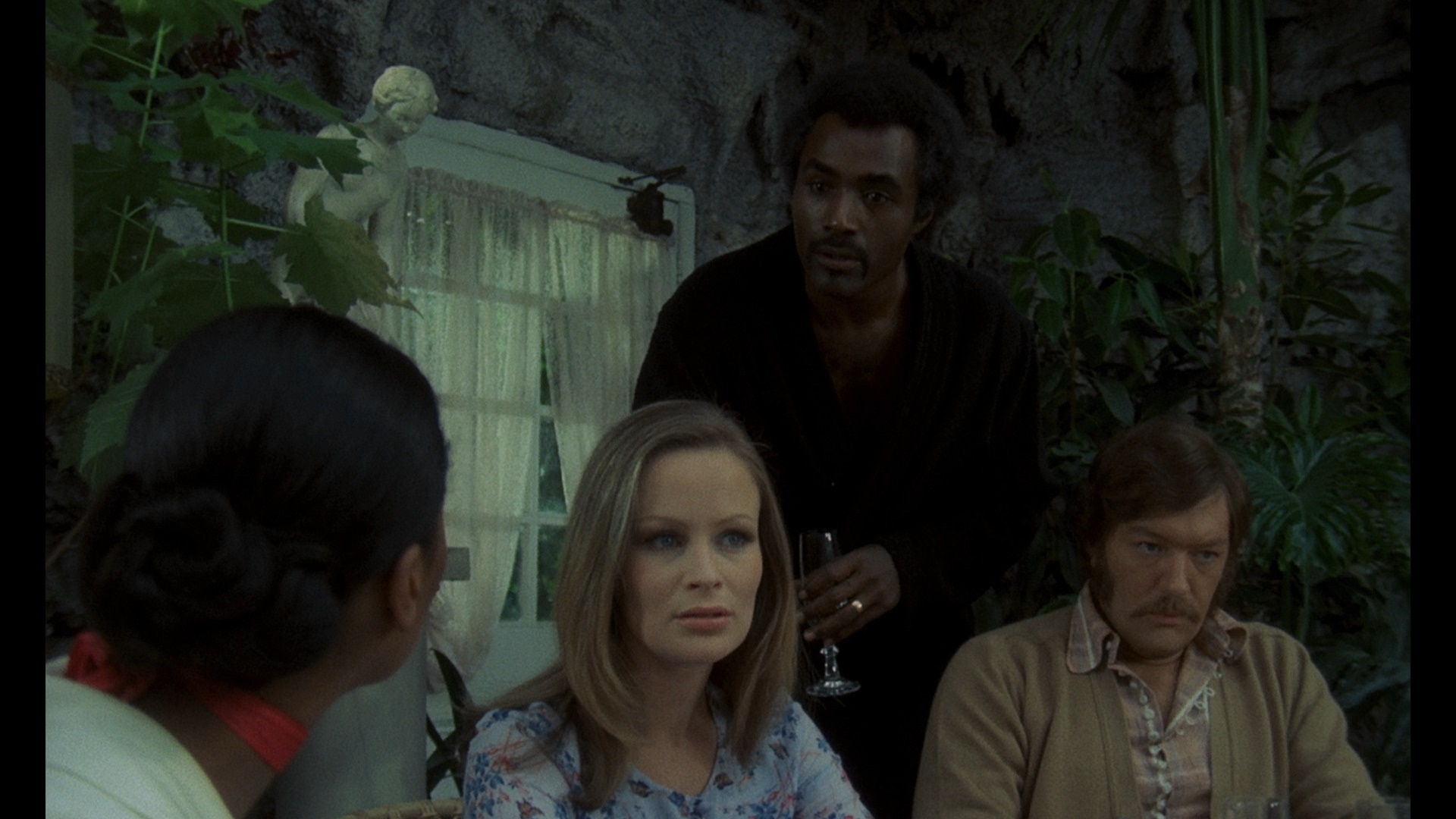 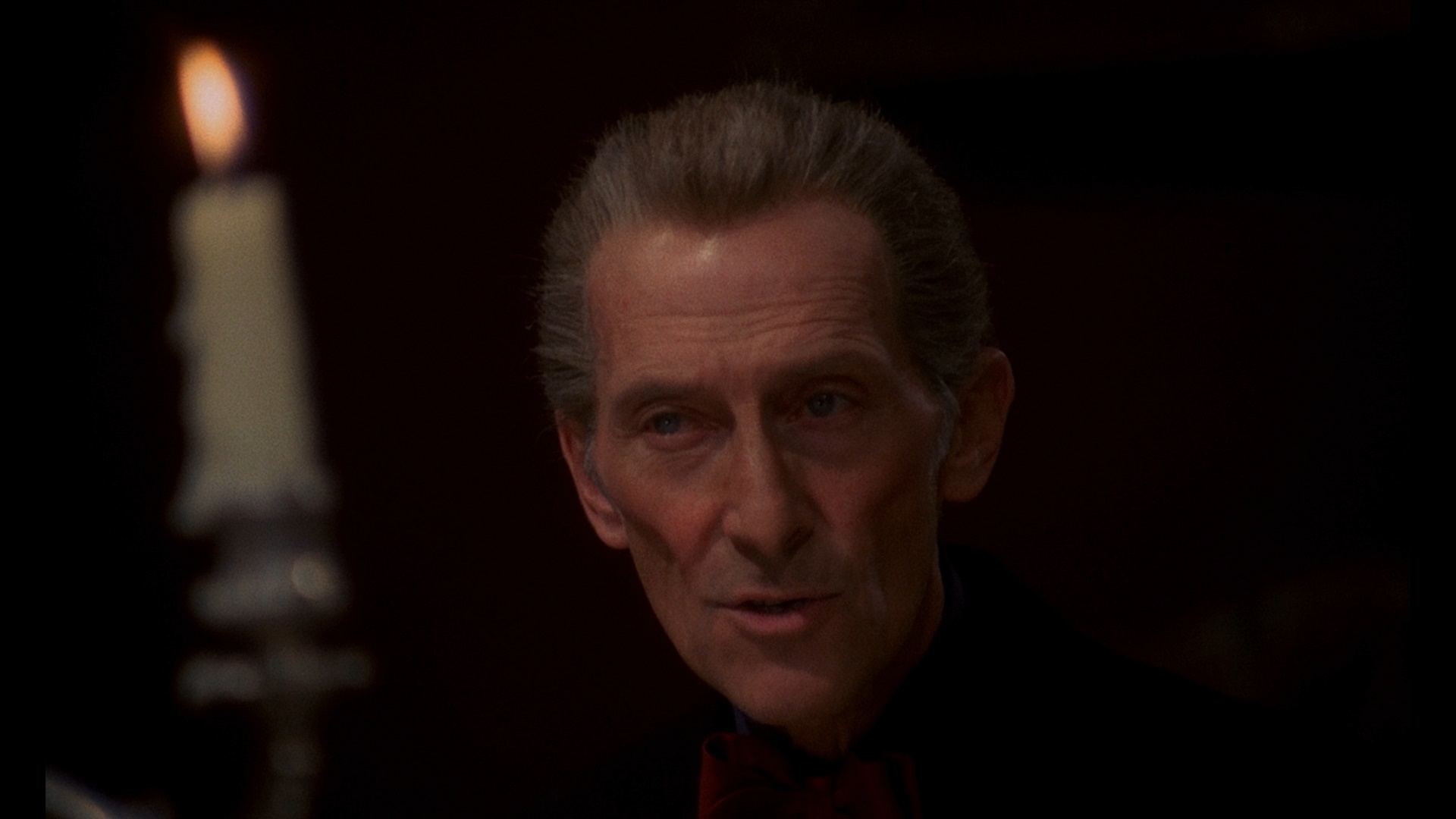 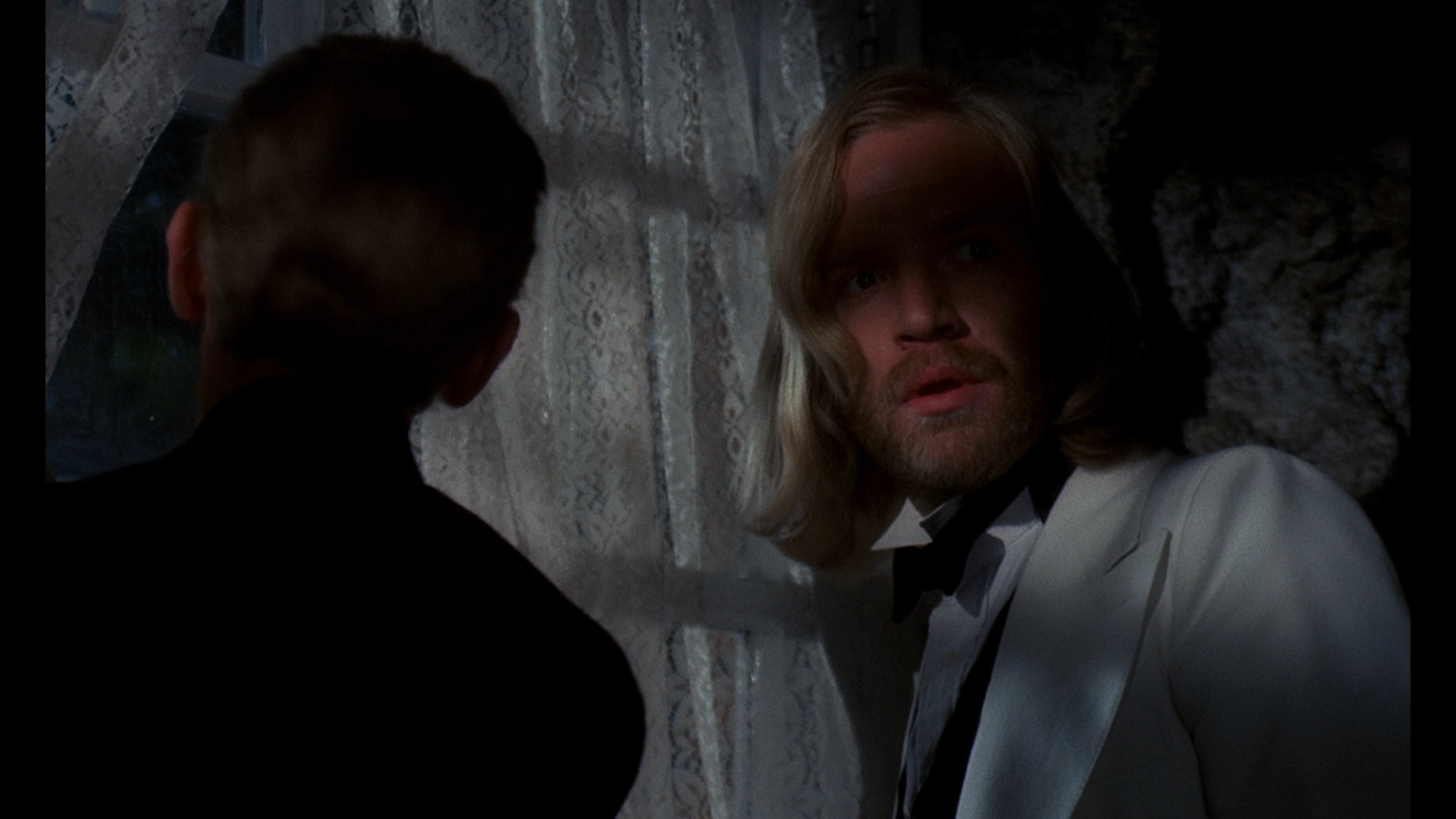 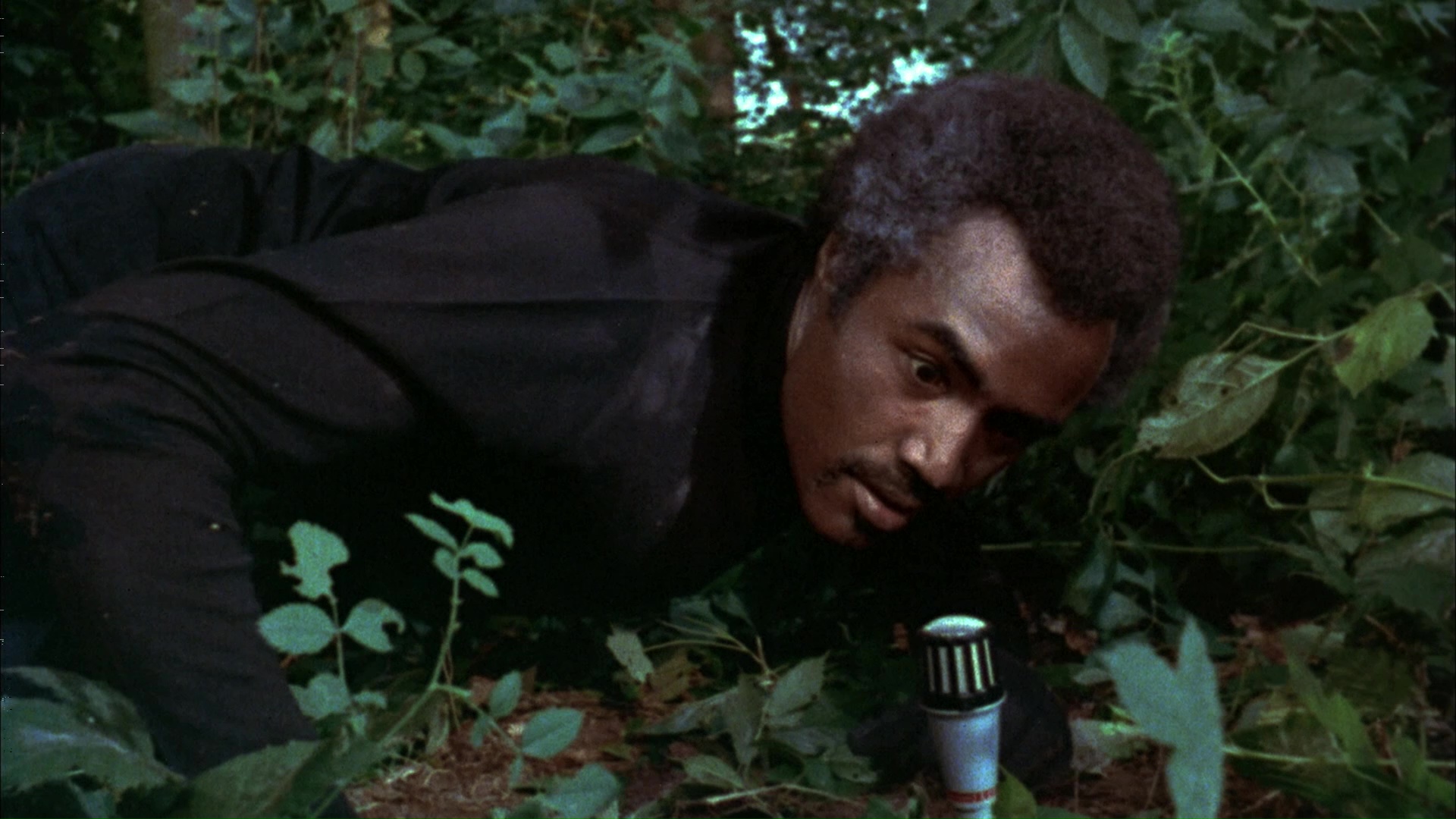 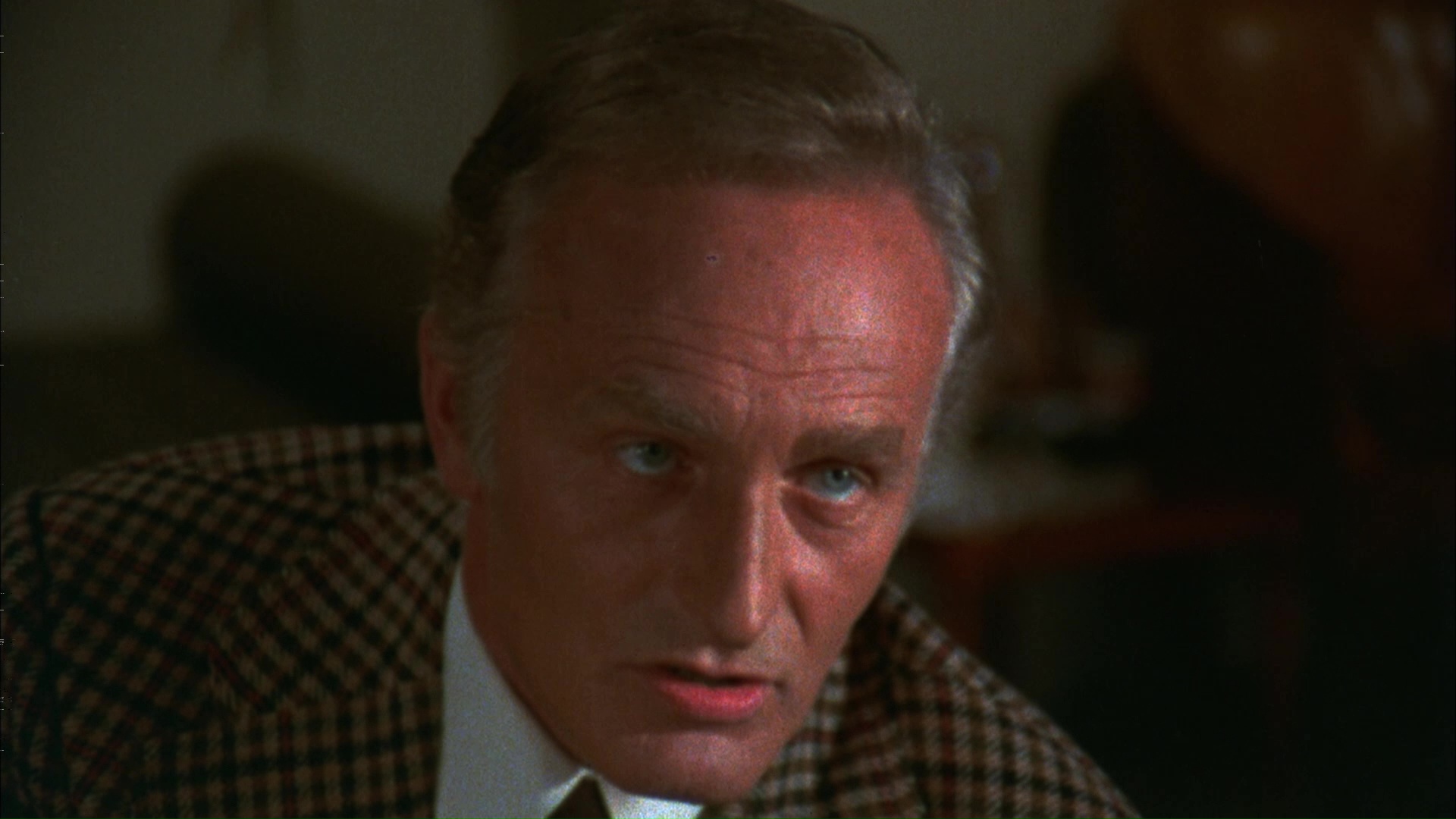 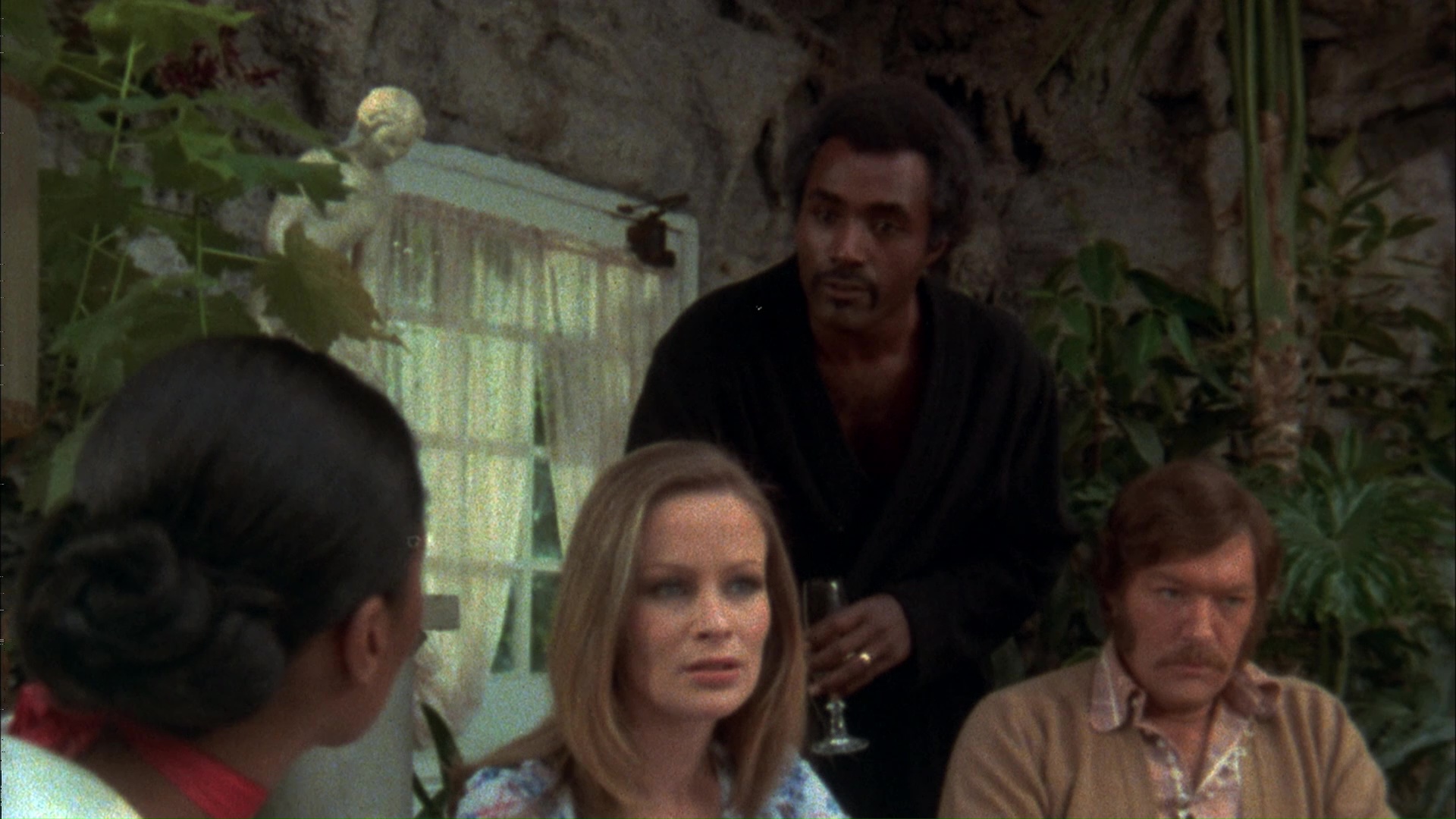 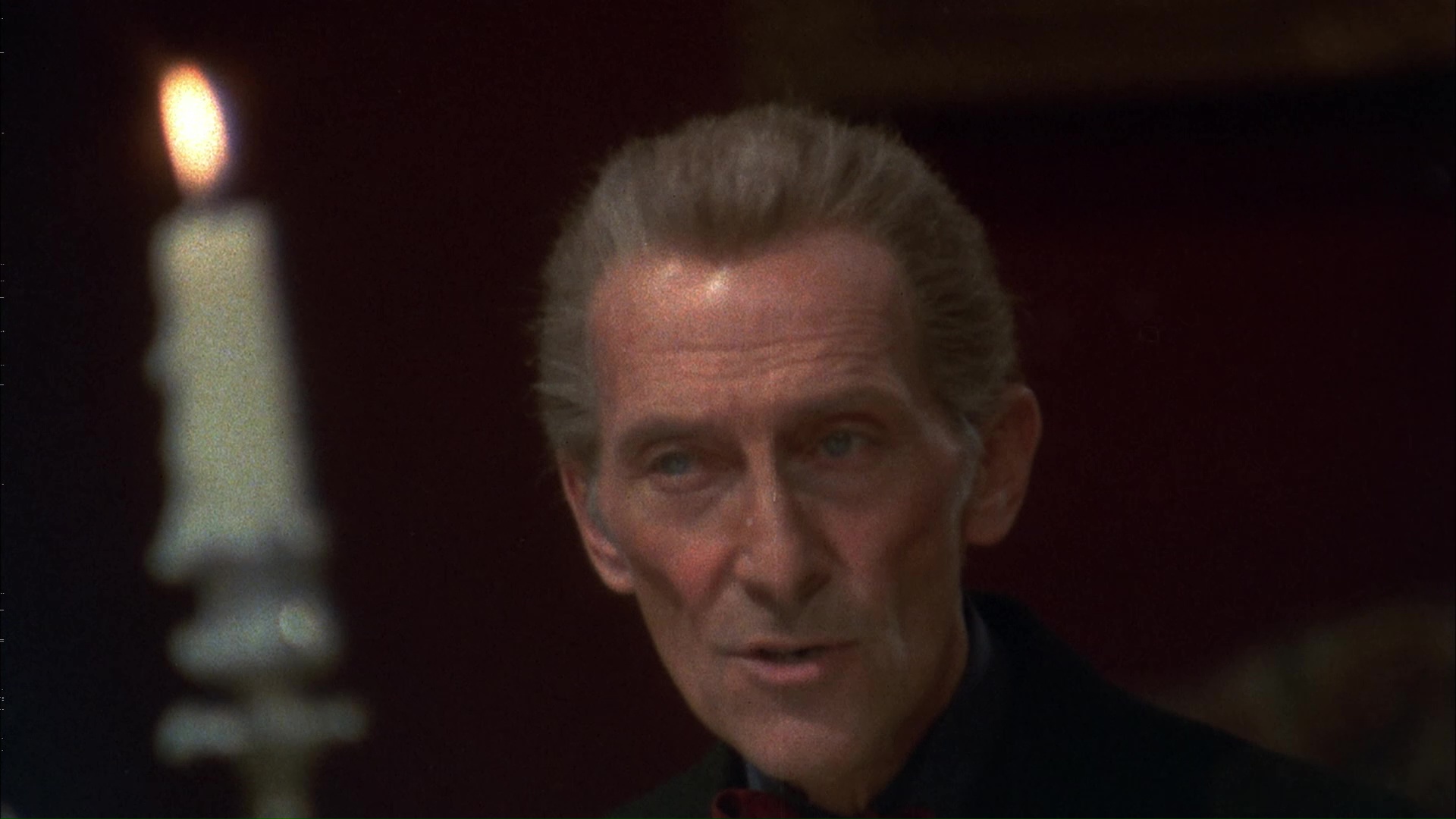 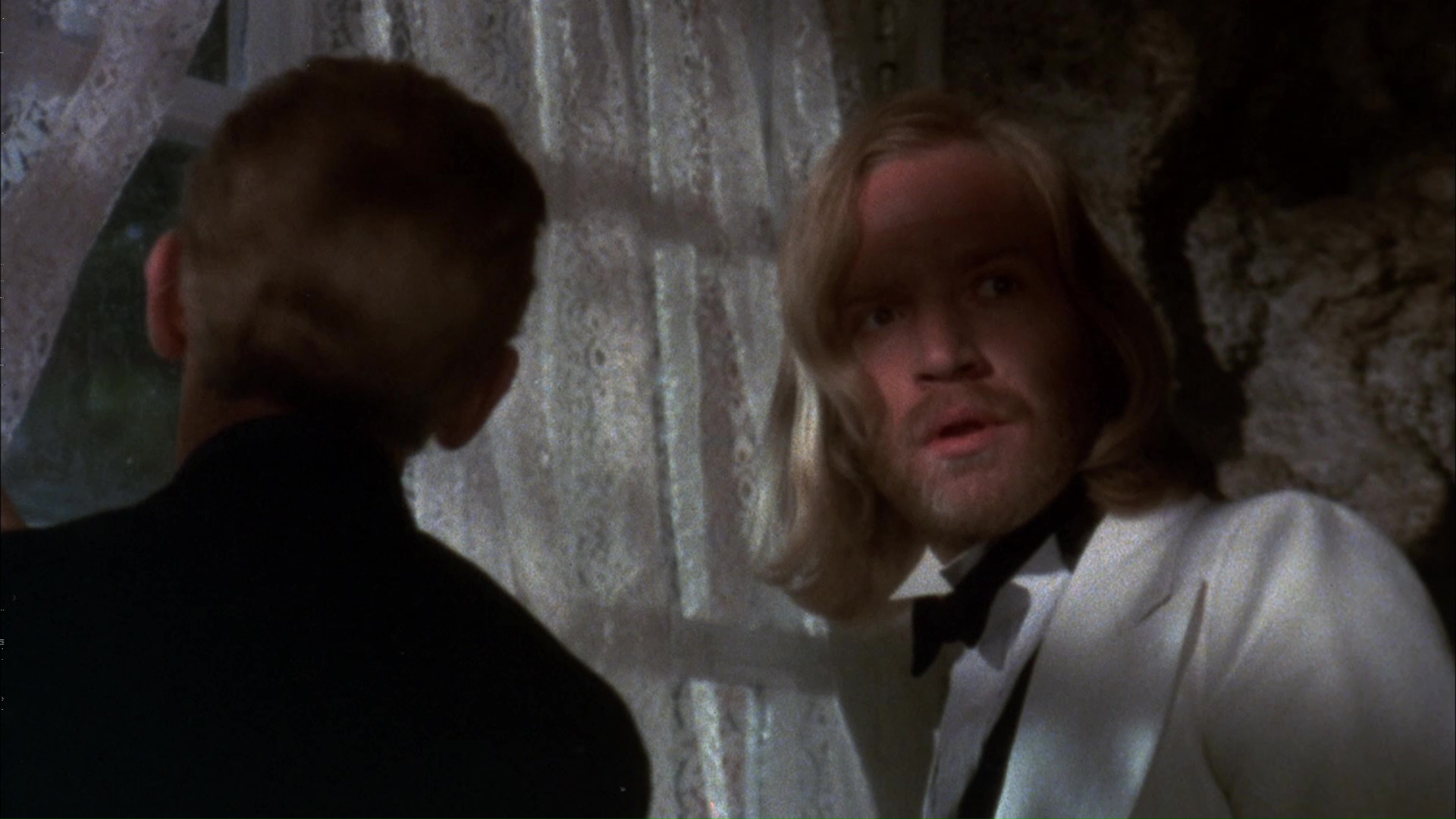 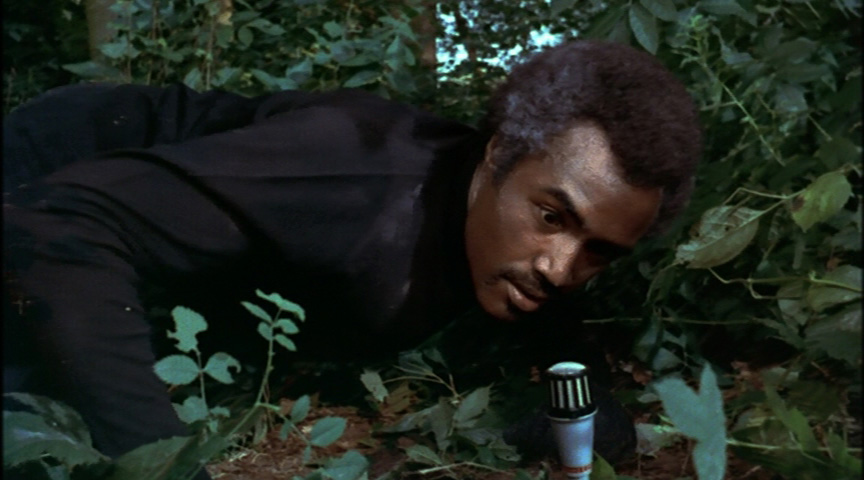 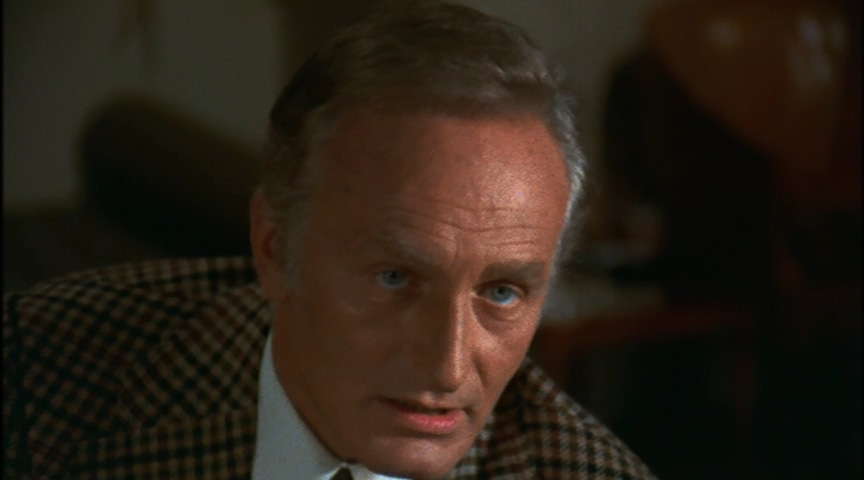 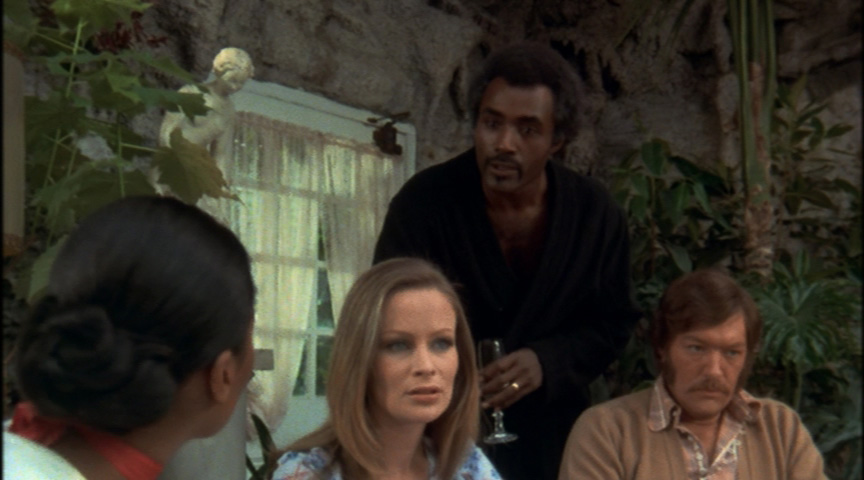 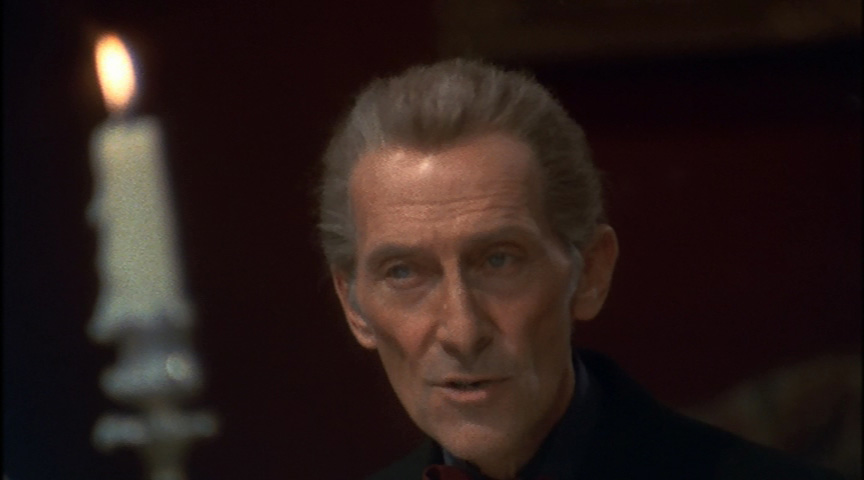 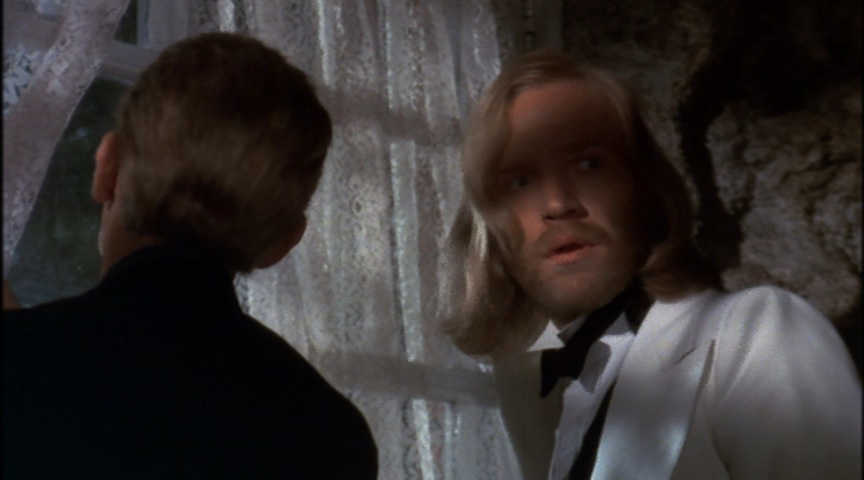