Adapted for the screen no less than eighteen times, this reliable murder mystery chestnut remains the most famous Sherlock Holmes adventure despite the beloved sleuth spending the entire second act off in the wings, or so it would seem. The storyline passed into public lore long ago, but for those with short memories, Baker Street detective Holmes and his right hand man, Dr. Watson, are pressed into service by one Dr. Mortimer, who reports that a mysterious slaying by a wild animal on the moors may be related to a centures-old curse placed upon the Baskerville family. The current and possibly last member of this unlucky clan is Sir Henry Baskerville, whose life both in London and back at the family estate appears to be in peril. Watson is sent out to investigate, and a deadly chain of revelations involving a ghostly hound leads to an unexpected climax.

After various silent film adaptations, Hollywood took its first major crack at The Hound of the Baskervilles in 1939 as the inaugural venture in its successful series of Basil Rathbone big screen mysteries. Withdrawn for years due a closing line reference to the sleuth's cocaine habit, this atmospheric, black and white yarn established a cinematic pattern which would continue to hold for two decades. That version was resusciated by MPI, first on DVD and then on Blu-ray as part of its Rathbone Holmes collections. It looks quite good and comes highly recommended, as does the 1959 Hammer version which can be read about in more detail here.

Considerably less dignified is the 1978 film of the same name, directed by Andy Warhol disciple Paul Morrissey (Flesh for Frankenstein) and starring famed comedy team Peter Cook and Dudley Moore (Bedazzled) as Holmes and Watson. Featuring a multitude of half-witted movie parodies (including The Exorcist) and a scattershot collection of gags, the film never gels as a whole but features an odd moment here and there to provoke a smile. At least the supporting cast offers some much-needed focus every time the film threatens to wander off, including Denholm Elliott as Stapleton, the wonderful Joan Greenwood, Terry-Thomas (in his final role) as Dr. Mortimer, AIP regular Hugh Griffith (the Dr. Phibes films), Roy Kinnear (in drag), Spike Milligan, and Fawlty Towers' Prunella Scales, among others. For Holmes-friendly viewers, however, this may not be much comfort as the familiar tale gets dragged through the wringer. 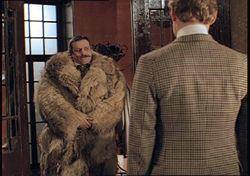 After the less than warm reception accorded to the U.K. theatrical release, the film was hacked to bits with numerous scenes shuffled around, producing a feature-length jumble that makes your average episode of Monty Python's Flying Circus look streamlined in comparison. Fortunately the CDA disc offers both versions, the more widely-seen 75-minute cut (pan and scanned but watchable) and the extended, more watchable original cut (in its original 2.35:1 Techniscope aspect ratio). Moore fans in particular will enjoy significantly more footage of the comic in action, both as Watson and... as an old woman. The disc also includes the U.K. theatrical trailer.

The closest color version to the Rathbone series arrived from the Soviet Union, strangely enough, with a lengthy 1981 television production. Busy actor Vasili Livanov had already etched out a notable career as Russia's Sherlock Holmes, starring in a television series and numerous feature-length productions. A very elegant and "English-looking" actor in both demeanor and facial appearance, he makes a satisfying (if culturally peculiar) Holmes and carries this production through quite well. The Russian countryside makes for a fascinating twist on the usual moors, while the opulent gothic interiors keep the eye busy while the brain is busy sifting through the details of the plot. Mild debits include a sometimes anachronistic music score more appropriate for a spaghetti western and some dubious fashion choices, including some very heavy, Slavic-looking coats. Twister's region-free PAL disc presents the Russian soundtrack in a gimmicky, reworked 5.1 mix that ranges from effective to distracting; viewers sensitive to digitized remixes may simply want to channel the sound through their television set rather than a souped-up audio system. The full frame video quality is excellent throughout, with only a few minor compression problems in some of the foggy scenes. The disc includes optional English subtitles, which feature the occasional typo but are generally literate and capture the nuances of Doyle's dialogue. 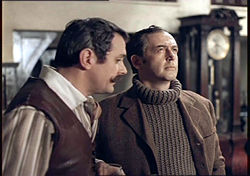 After the 1978 debacle, Denholm Elliott switched roles to play Dr. Mortimer in a far more faithful and successful 1983 adaptation, made for British television and directed by Anthony Hickox (Theatre of Blood). Extremely well-acted and photographed, this is one of the strongest adaptations and, relatively speaking, faithfully adheres to the source. This version also benefits from on-location photography of the moors in Devonshire, which make a suitably damp and ominous setting. Kudos as well to the sterling score by Michael J. Lewis, who provides a soaring orchestral accompaniment worthy of a Hollywood epic. The Image DVD, one of the earlier titles in their catalog, features a passable transfer that never really surpasses its early '80s television origins. That said, the 35mm photography fares well enough and the source material is mostly free from wear and tear.

Astonishingly, it took several years before Granada TV's consummate Holmes, Jeremy Brett, took a stab at the Baskerville story in 1988. Though less successful overall than the 1983 version, this at least offers the chance to see Brett (possibly the best Holmes ever) enacting the famous story. It also offers the chance for Brett's regular Watson sidekick, Edward Hardwicke, to take the narrative reins for much of the running time; it's just as well since Brett seems a bit haggard and tired here, perhaps due to a long-running offscreen illness he was suffering at the time. Easily the most faithful of the Hound adaptations to date, this version may seem a bit dry compared to the blood and thunder of previous versions but makes for elegant, refined viewing on its own terms; the horror content is understandably downplayed, while some of the seedier aspects are surprisingly played up (in keeping with the original source). The hound itself is also perhaps the most plausible of this cinematic kennel, resembling something close to the explanation provided by the actual mystery. The MPI DVD looks gray and flat overall, with fairly washed out contrasts, but this may be in keeping with the original photography. It's watchable but hardly demo material, while the audio is crisper than usual for the Brett series. 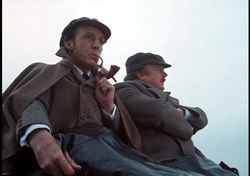 Finally we reach the most controversial adaptation to date, the BBC's 2002 glossy, hi-tech version starring Aussie actor Richard Roxburgh (Moulin Rouge) as the venerable detective. Rugged and noticeably sans his trusty deerstalker, this Holmes is paired up with a noticeably randier Watson (Ian Hart) who pursues the distaff Stapleton with energy more akin to an American Pie sequel. Complete with dramatic smash cuts, flashy digital video editing effects and a rampaging CGI hound from hell, this outrageous overhaul barely qualifies as a whodunit (barely any attempt is made to conceal the villain) and functions better as a suspenseful period drama with genre-bending flourishes, much closer to The Brotherhood of the Wolf than Baker Street. Undeniably fast-paced and entertaining, this Hound makes for a lousy introduction to Holmes but, as crackling entertainment on its own terms, serves as an enjoyable popcorn-muncher. The extras-laden BBC DVD features a crisp 1.85:1 transfer, anamorphically enhanced and featuring a thunderous, constantly active 5.1 audio mix. A "making of" featurette includes interviews with the principals (including boyish Australian character actor Matt Day as Sir Henry), along with footage showing the digital effects masters at work creating the hound.