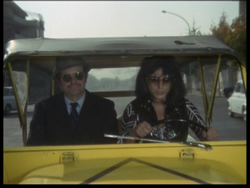 When the '60s ended, so did the Italian craze for anthology films. The decade had been filled with multi-story offerings showcasing some of the country's finest and/or sexiest actresses in a variety of scenarios, such as Boccaccio '70 or The Witches, but the trend began sputtering out to make way for a new generation of directors. However, Italian TV allowed the format to flourish a little while longer, and one of the most prestigious examples was Tre donne ("Three Women"), a triple-film series in 1971 by RAI. The concept here was an interesting one, casting Oscar winner Anna Magnani (The Rose Tattoo, Mamma Roma) in three feature-length character studies showin 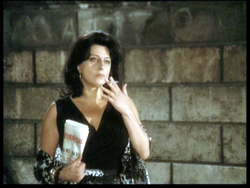 g how society in Italy went through upheaval before, during, and after World War II. The Automobile (L'automobile) is the third, modern contribution to the cycle, all of which were directed by Alfredo Giannetti, whose main claim to fame with the classic 1961 comedy Divorce Italian Style. Sadly this proved to be one of Magnani's final projects (she died in 1973), but based on the evidence of this one example, she certainly remained a fiery performer to the end.

The film begins with a wonderful pop-art roar as we're introduced to Anna (Magnani, natch), an aging prostitute in Rome who's become a regular fixture in go-go nightclubs filled with the groovy sounds of dance music by Ennio Morricone (who scored the other two films in the series). Deciding she's had enough of the city life, she decides to splurge on the one status symbol she prizes above all others: her own yellow car. When that dream becomes a reality, she decides to hit the road and explore the surrounding towns where she might set up a quiet life of 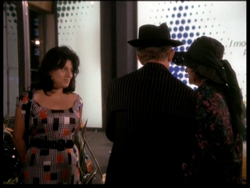 her own; however, as she meets the locals and becomes disillusioned by the blown opportunities around her, she reflects on the ups and downs of her homeland since the war she still remembers vividly.

This film is obviously Magnani's show all the way; she's front and center of virtually every single shot, and she etches a memorable character that could have easily collapsed into maudlin cliches. You'll probably see the ending coming about twenty miles away, but she still manages to pull it off and yields some effective pathos from her final few shots. The Morricone music doesn't hurt, either, including a memorable central theme for Anna's character that lilts through the action as only he could pull off. He was no stranger to sliding a few tracks from his earlier films in as source music now and then (for example, sampling Forza G as party music in Four Flies on Grey Velvet and using the great "Belinda May" from L'Alibi in the opening of Cold Eyes of Fear); here he takes it to new levels by integrating at least four snippets from his other scores, but the main original work here is still strong indeed.

Though it was released on Italian DVD in 2007, The Automobile has been extremely difficult for English-speaking viewers to see (as with the other two Tre donne films). The Raro release in America is essentially a premiere for most Italian cinema fans, who should get a kick out of seeing this little slice of early '70s filmmaking pulled out of the vaults. The full frame transfer is above average for an RAI production of the period; it's a little grubby and cheap and was probably shot in 16mm like most of its ilk, but it's hard to imagine it could ever look a lot better. Colors are vivid enough when it counts (especially that car, of course), and the mono Italian dialogue sounds seviceable enough with optional English subtitles. Extras include a theatrical(?) trailer, a video intro about the film by critic Mario Sesti (who doesn't really go into its TV origins and mainly talks about Magnani's career at the time), and in lieu of the usual liner notes, a DVD-Rom PDF containing a digital booklet with notes on the film by writer Bruno Di Marino, who goes into more detail about Giannetti and the leading lady.