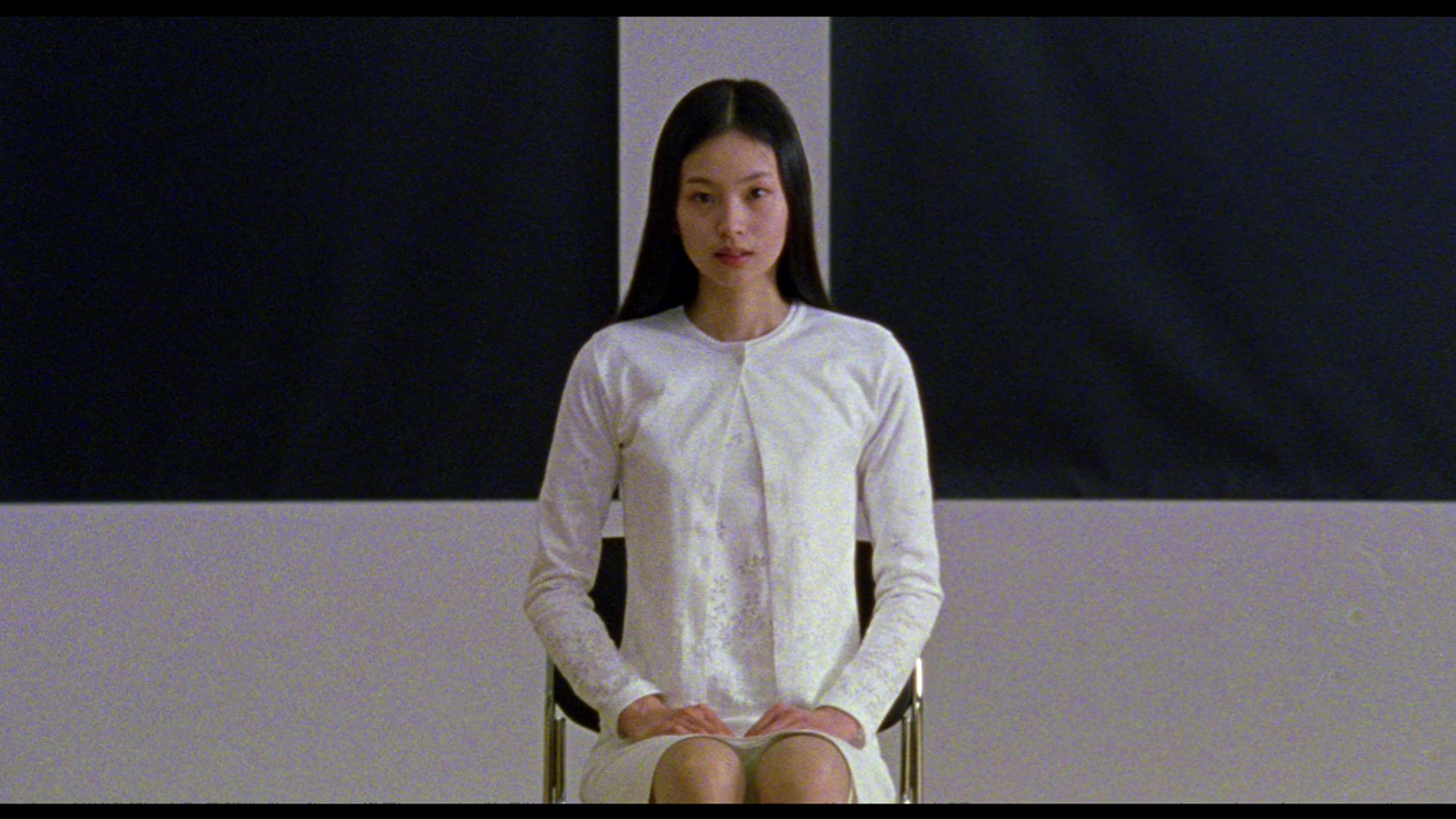 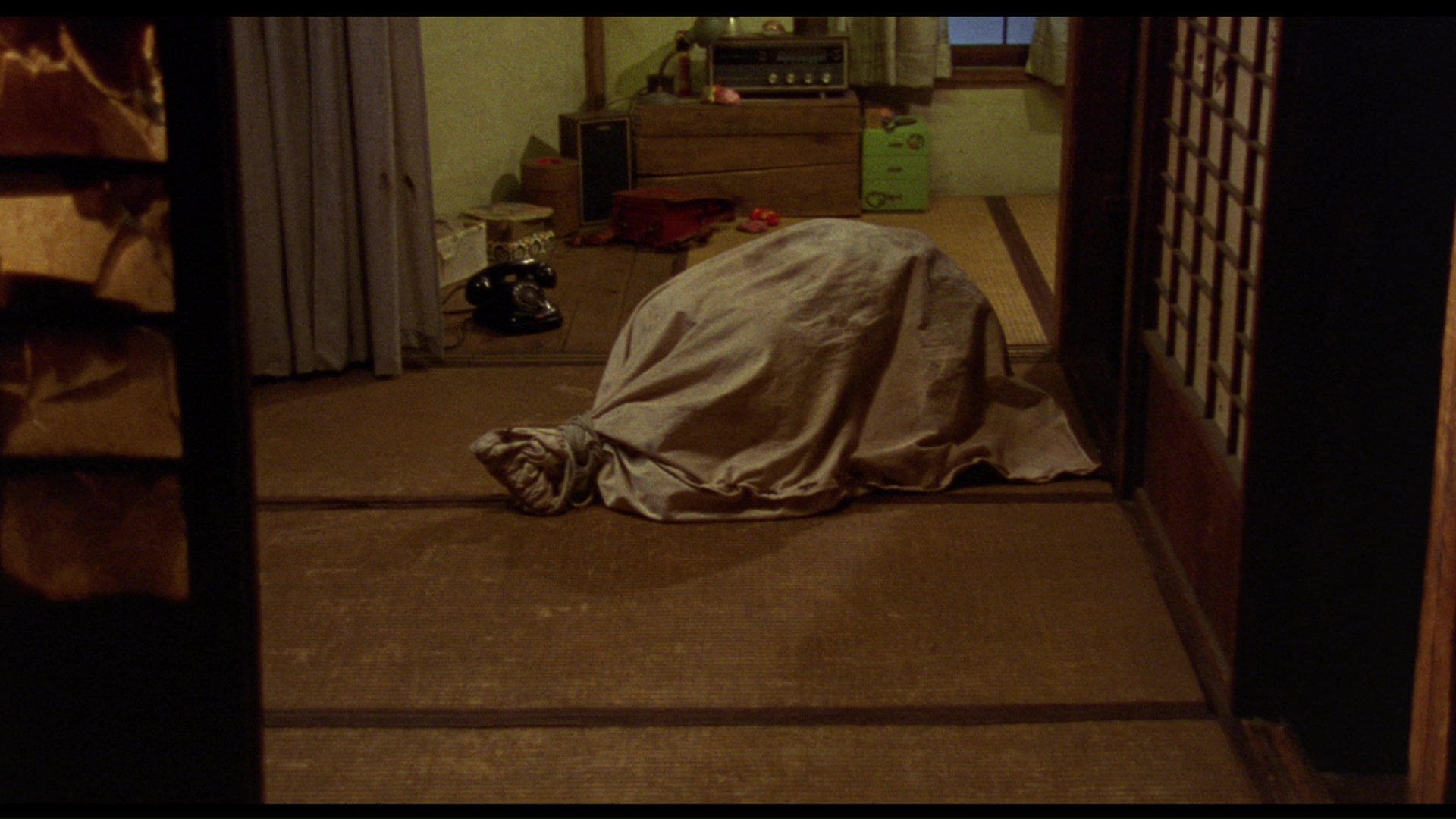 One of the more surprising breakthrough films in the watershed year of 1999 was Audition, a crafty little sucker punch of a film that starts off as an offbeat romantic drama about a man dealing with his mid-life crisis by seeking the company of a pretty young woman. However, it turns out this film has some nasty teeth and isn't afraid to bite its viewers, so those with strong stomachs should simply seek out this astonishing film without any further description.

Still staying free of major spoilers, here's a taste of the initial premise. After recovering from the death of his beloved wife Yoko, middle-aged Aoyama (Ishibashi) is left to raise his son all alone for several years. Aoyama discusses his loneliness with his best friend, a movie producer, who suggests an interesting new twist to avoid the complexity of dating rituals. The two men decide to hold an audition for a movie which will actually serve as a method of finding a new wife for Aoyama. The ideal woman should have some kind of artistic talent and a genial nature, qualities which appear in abundance in the form of Asami Yamazaki (Shiina), a former ballet dancer and aspiring actress. The two tentatively begin a relationship, though her past acquaintances either tell cryptic stories or appear to have vanished completely. And that's just the beginning...

Best known before this as the director of kinetic, gory action fare 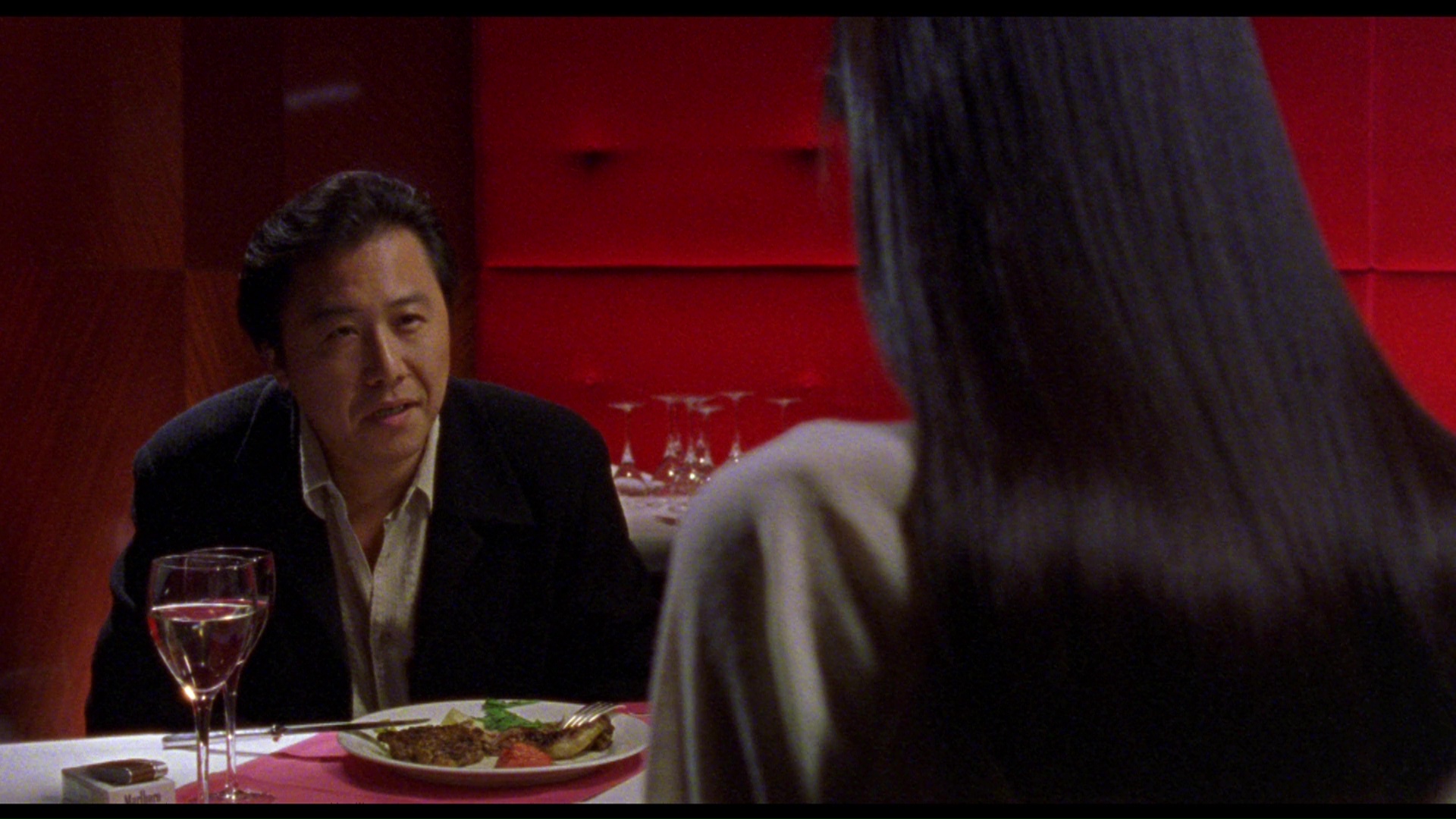 like Fudoh: The New Generation and Dead or Alive, the prolific Takashi Miike restrains himself somewhat by confining the graphic horrors to the final act of this film, which laces most of its chills through the rest of the running time 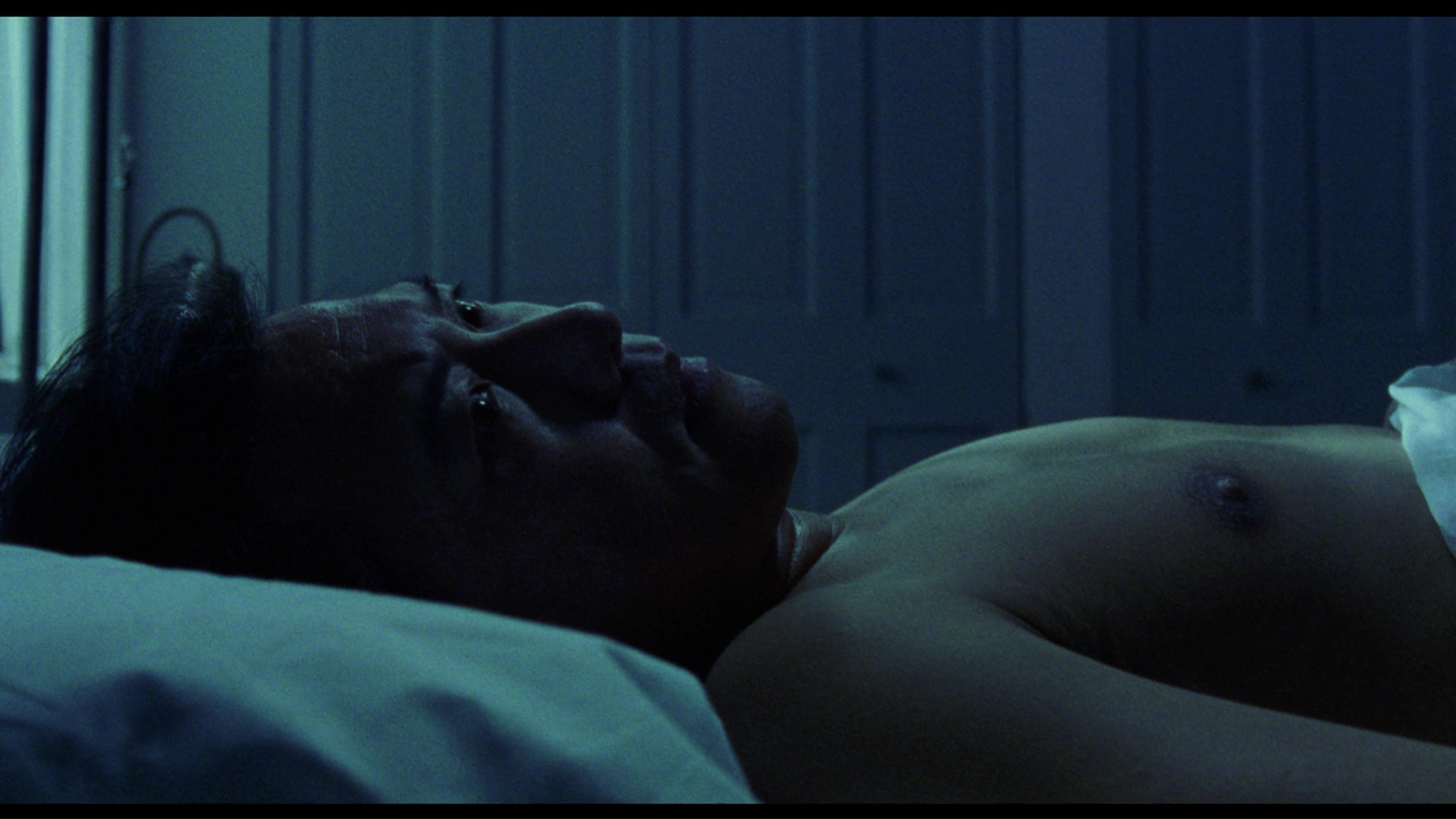 with quick, subtle shivers that pass by almost unnoticed. In particular, one beautifully executed scene involves Asami sitting in the foreground listening to a ringing telephone while something very sinister happens in the background. Acting, direction, and photography are all first rate, and the story expertly pulls the rug out from under the audience several times, deftly moving back and forth between reality and illusion as the narrative glides towards its grisly, inevitable resolution.

As was common at the time, the first DVD of this film came from Hong Kong in 1999. The Universe Region 3 release was an okay flat rendering of the film with the Japanese dialogue presented with optional Chinese or English subtitles, which are grammatically awkward at times but get the meaning across well enough. The disc also includes a trailer loaded with spoilers, in Japanese with Chinese subtitles. In 2000, the first North American release arrived on DVD from Ventura in 2002, also not anamorphic but featuring a 5.1 audio mix, a selected Miike commentary for the final stretch of the film, a trailer, a photo gallery, and a 24-minute Q&A with Miike from a screening at the Egyptian Theater in Hollywood. A different 11-minute Miike interview popped up on the first UK DVD from Tartan, which was also the first anamorphic one out of the gate. A 2009 DVD reissue from Lionsgate features a remastered (albeit interlaced and PAL-converted) transfer, a new 4-minute Miike intro, the partial commentary, the Q&A, a photo gallery, a relevant selection from Bravo's 100 Scariest Movie Moments, 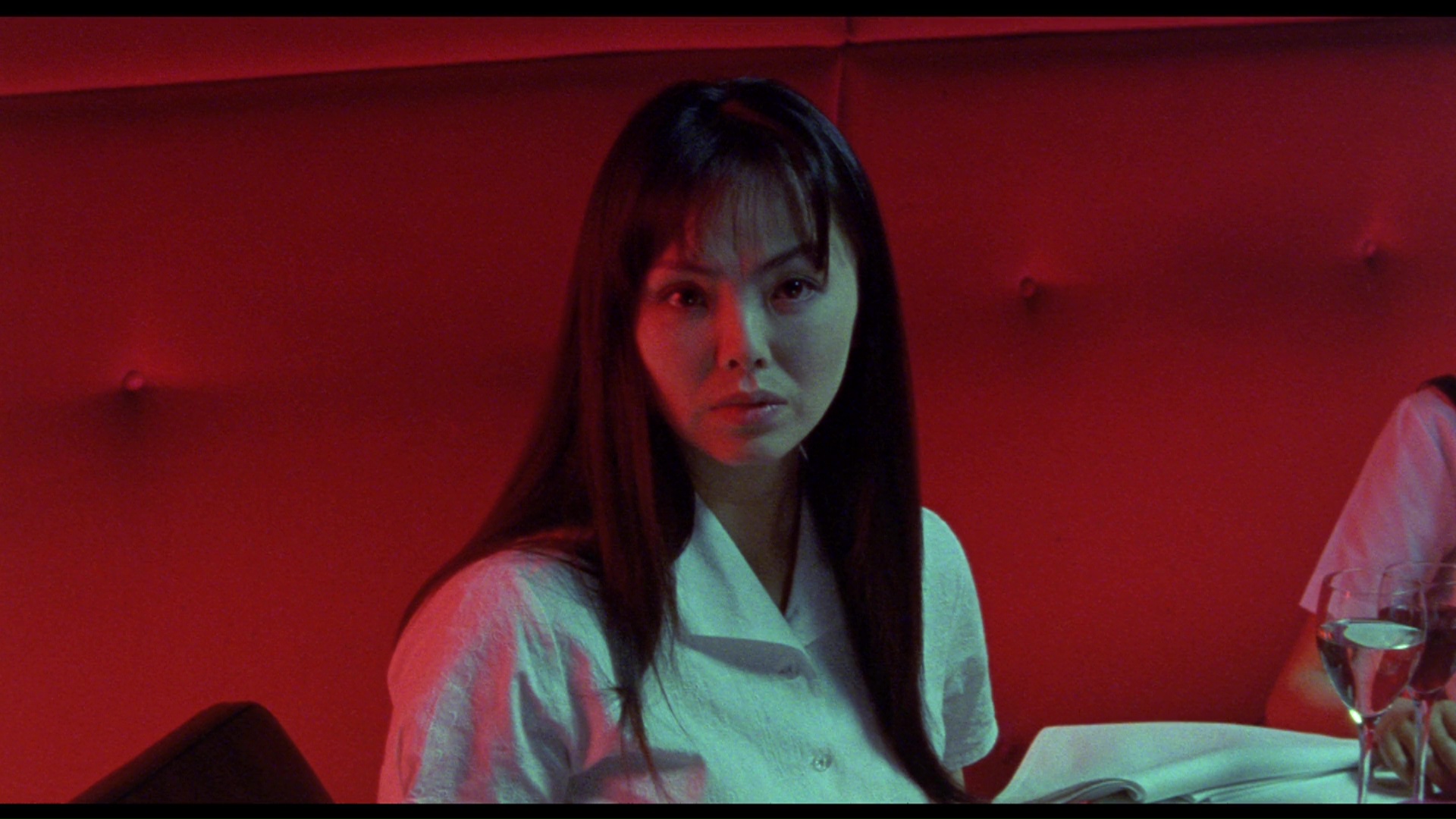 and a 24-minute Ryu Murakami interview (in really poor quality), and a bizarre assortment of bonus trailers for The Eye 2, Premonition, Infection, Ju-on, American Psycho, and, uh, Waiting... Audio for the main feature is Japanese 5.1 and 2.0 Dolby Digital audio with English or Spanish subs.

The first English-friendly Blu-ray of Audition arrived in 2009 from Shout Factory as a two-disc set, with the first disc featuring a Blu-ray of the feature itself with a new audio commentary featuring Miike and screenwriter Daisuke Tengang with film writer Masato Kobayashi. The Japanese DTS-HD MA 2.0 stereo audio is solid as is the transfer, which was the best up to that point. The feature kicks off with an amusing one-minute intro by Miike (shot in the same style as the film's audition footage). 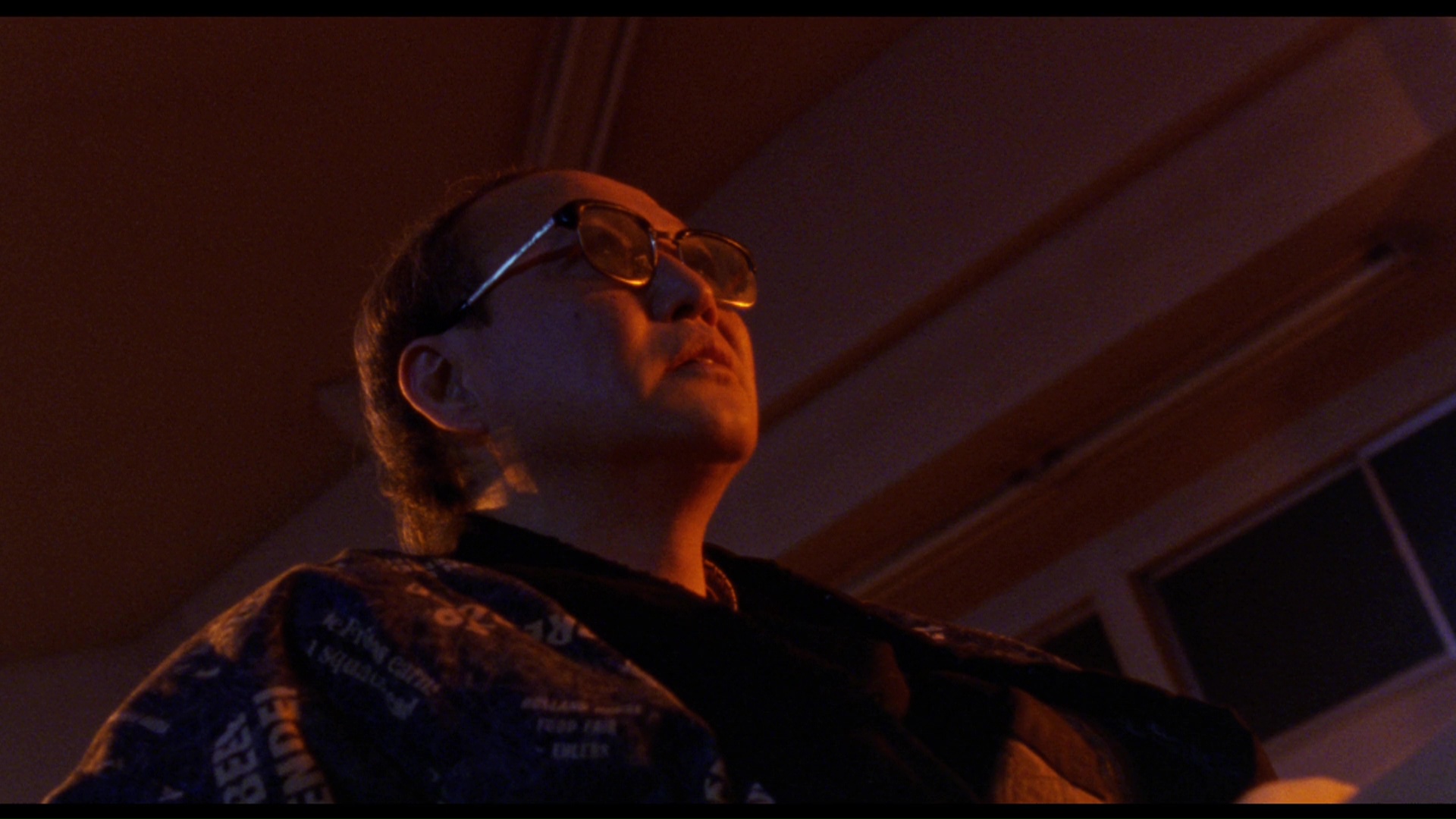 The second disc, a DVD, features new interviews with the cast: "Ryo Ishibashi: Tokyo-Hollywood" (16 mins.), "Eihi Shiina: From Audition to Vampire Girl" (20 mins.), "Renji Ishibashi: Miike's Toy" (21 mins.), and "Ren Osugi: The Man in the Bag Speaks" (16 mins.), with the subjects talking about everything from their day jobs (former singer, Benetton model, all-around slacker) to their thoughts on whether the film qualifies as horror and transcends the Japanese cultural attitudes that shaped it. Also included are international trailers and a liner notes essay by Miike biographer Tom Mes.

The Arrow release from 2016 comes as separate steelbook and standard Blu-rays with a new 2K transfer of the feature. It also has the same Miike intro from the Shout Factory disc 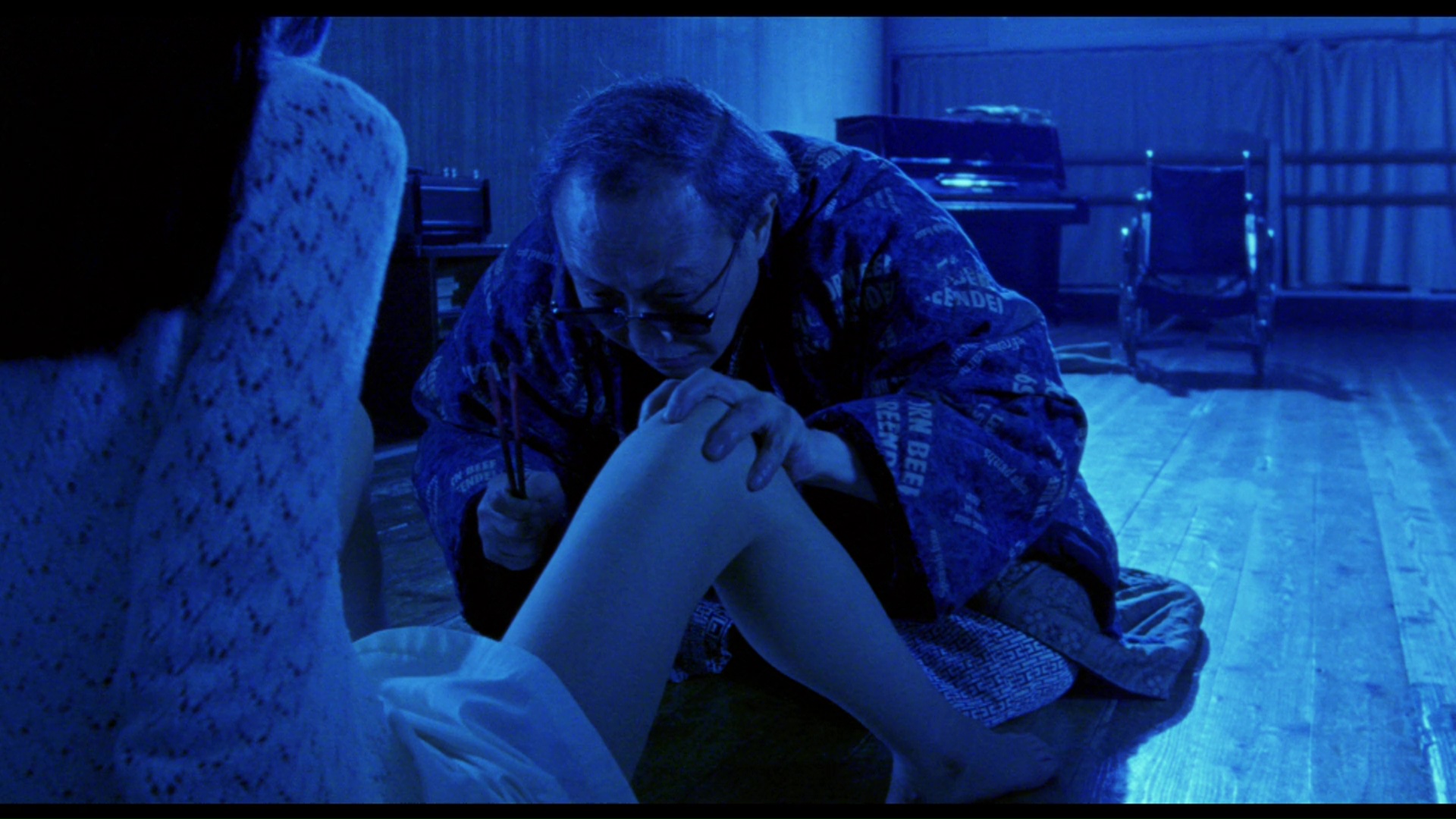 (optional this time), while the feature can be played with two audio commentary options: the American one with Miike and Tengang, and a more dense, academic one by Tom Mes, which is new and exclusive to this release. The 5.1 DTS-HD MA Japanese audio is fine considering how muted the actual film mix is, and the new transfer is a bump up from the prior releases eking as much detail as possible out of a fairly dark, soft-looking film that looked that way even during its initial theatrical screenings. The source for the frame grabs seen here, it's quite a bit richer in appearance with deeper blacks and better resolution in wide shots, while the occasional bumpy splices from past versions have been almost entirely eliminated. Next on the video side comes a healthy heaping of interviews in a subsection of the special features: "Takashi Miike: Ties that Bind" (30 mins.), a brand new interview with the director, plus the four featurettes from the Shout Factory release. The new 35-minute "Damaged Romance: An Appreciation by Tony Rayns" features the familiar Japanese cinema expert offering a great deal of additional context to the rise of Miike's popularity and his background in the world of Japanese filmmaking, with additional insights into the film's groundbreaking take on both horror and romantic film conventions. Finally the disc rounds out with the Japanese and international English trailers, and a gallery of stills and promotional art, while the steelbook also features a second DVD with the same contents in SD. So long story short, you're fine getting either Blu-ray depending on your region, but anyone capable of Region B playback should find the Arrow release to be the final word on Miike's twisted masterpiece for quite a long time.