Ever wonder how Mystics in Bali would have turned out had it been made by a gang of American midwesterners? Well, wonder no more; the utterly mad Aswang lifts that Indonesian film's most celebrated fetus-feeding scene and stretches it out for an entire feature, along with touches lifted from sources as disparate as Filipino horror, The Evil Dead, and The Texas Chainsaw Massacre. Obviously, you've never seen anything like it. 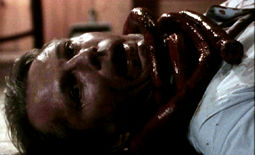 Against the wishes of her mopey boyfriend, pregnant Kat (Paukstelis) goes to the office of an aging lawyer and enters into a complex legal agreement with the Null family, a clan of orchard growers in the country. In exchange for payment, she agrees to pose as the wife of the male head of the household, Peter (Moses), who must produce an heir to maintain the family wealth, and then offer up her unwanted baby upon its birth. Soon Peter spirits her away to the family home, where she meets his aging mother (Flora Coker) and the creepy, quiet housekeeper (Mildred Nierras). While strolling outside, the not-so-affectionate couple comes across a trespasser, Dr. Harper (John Kishline), who has come across strange, coccooned remains in the woods. Kat invites the doctor for dinner, much to Peter's displeasure, and that evening Harper learns the Filipino legend of the aswang, 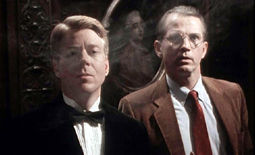 a vampiric creature that feeds on unborn children. Later that evening, Harper is attacked by a long, slimy tongue which wraps around his throat, and Kat is soon plunged into a grueling night of terror including chainsaw mayhem, spade attacks, dismemberment, baby slurping, and other antisocial behavior.

Completely lost in the dying gasps of the home video horror wave in the mid-1990s, Aswang was a surprising entry in the Sundance Film Festival (where it played to a full house at midnight) before it was picked up by Prism, who retitled it The Unearthing, trimmed out several seconds of bloodshed, and barely released it on VHS with a shoddy cover and substandard transfer (replicated on a scarce Image laserdisc). Too bad, as the film itself is worth seeing despite some shortcomings. The isolated, rural atmosphere is well maintained, with the unfamiliar Wisconsin settings (previously the stomping grounds of The Giant Spider Invasion's Bill Rebane) lending the film an off-kilter sensibility from the opening frames. Though the film isn't exactly frightening in the traditional sense, it does boast a number of memorable, grotesque setpieces, particularly one elaborate sequence which finds the family matriarch using her aswang tongue to assault the heroine before winding up dangling outside the house from a slammed window. The actors range from adequate (Paukstelis, Coker) to substandard; unfortunately the weakest link is Moses, who contributes a wildly uneven, stagey performance complete with hammy, eye-bugging theatrics that don't translate well for the camera at all. The sick twist ending may not come as a huge shock, but it's pulled off with panache and comes as a logical, nasty product of everything that's come before. 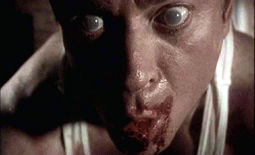 Mondo Macabro's DVD offers what appears to be the best possible transfer of a difficult title; the cheap film stock results in an erratic, cheesecloth-style texture at times, with dark scenes ranging from moody and well-lit to downright murky. All things considered, the anamorphic presentation looks satisfying all around; note that the 1.66:1 compositions will appear a bit vertically cropped on many widescreen monitors (which adust automatically to 1.78:1), which noticeably cramps the framing in a number of early scenes. Audio is presented in both the theatrical 2.0 stereo mix and a remixed 5.1 option; the former is by far more effective, as the 5.1 version features extremely muffled dialogue and almost nonexistent sound effects with an overamped music track. Two audio commentaries are offered, with the two one-shot directors first up at bat. Moderated by Mondo Macabro head Pete Tombs, their track is generally engaging if a bit on the sedate side; they explain the genesis of the film (including the rationale for doing Filipino horror in Wisconsin) and relate how the project was financed, cast, produced, and distributed. The second track is a bouncier chat with Moses, Paukstelis, and Kishline; it appears Moses was recorded separately with each actor, as he introduces himself twice and seems to be existing in two different places at once (a very disorienting but appropriate experience). The genial Paukstelis gets the best moments, from her opening recollections of shooting the nude opening credits sequence (during which her male co-star got overexcited) to dealing with the complex, often icky special effects. Moses hams it up just as much on the commentary track, but he's much easier to take out of character. The participants turn up again for "Different than Hollywood," an engaging 27-minute documentary covering the making of the film including audition and rehearsal footage, interviews, and other odds and ends. The directors also explain the fundraising demo trailer they concocted for the film, which is also included on the disc along with two more traditional trailers for the final product, under its original and alternate video titles. (You'll also get a fun, nostalgic look at Prism's VHS ballyhoo tying The Unearthing in with some other barely remember straight-to-video schlockers.) Kishline turns up again to read a lengthy deleted prologue, scripted but never filmed, which explains in greater detail how his character became involved with the Aswang (and which also goes some way to explaining his character's peculiar longevity). Other bonuses include two audition tapes, an extensive still gallery, and a little hidden goodie as well. Chow down...