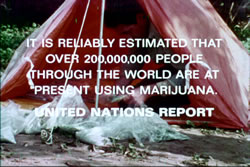 You know all those old classroom videos warning kids about the horrible dangers of doing drugs? Some educator or celebrity comes out and wags his finger, then the viewer is subjected to lots of staged scenes depicting the deplorable depths to which people fall when they take a toke or snort a line. Well, what would happen if someone made a feature-length version of one of those, except the message is the exact opposite-- pot is good for you! And not only that, they spliced in a little porn footage including John Holmes as an uptight desk jockey who learns to stop worrying and love the bong! Wonder no more, friends, because that movie actually exists, and it's called Aphrodisiac!: The Sexual Secret of Marijuana. A somewhat cleaned-up version of this film, shorn of half an hour, appeared as an extra on Something Weird's Alice in Acidland / Smoke and Flesh double feature as well as a watermarked DVD-R version in its longer variant directly from the company's site. Impulse's disc is presumably the only one available that's complete and not watermarked, so it might be worth an upgrade for that alone; the transfer is also a bit 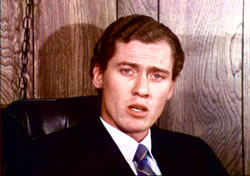 better, considering the fact that this is a cheapo early '70s docu-smut film. Colors still have that drab, inconsistent look you find in most comparable films of this vintage, but at least the compression's better and, despite the absence of extras (man, imagine the short films that could've gone on this one), it's nice to see this crackpot obscurity getting a mainstream(ish) release.

Not wasting any time, Aphrodisiac! kicks off with hilarious narration and man on the street interviews charting the history of marijuana use in America, complete with an implied endorsement of cooperation from the United Nations(!). The "candid" interviews continue 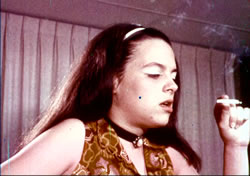 throughout the film (including a completely random appearance by '30s midget actor Billy Curtis), interspersed with vignettes demonstrating that pot isn't just good for you; it'll also make you really, really horny. For example, a couple hooking up at a party are disappointed when their car petting session can't get off the ground, so to speak, due to a surplus of alcohol. On the other hand, couples who enjoy a toke together have an amazing sex life, even with a group of their friends! A married couple having trouble in the sack since their honeymoon discovers bliss when hubby slips his wife (Necromania's Maria Arnold0 some ganja without her knowledge; a women's lib magazine writer (sexploitation favorite Sandy Dempsey) learns the joys of MJ-influenced bonking; and as mentioned earlier, John Holmes loosens up with a sexy young thing in his office decides to turn him on, in every way. Heck, apparently marijuana is especially great for interracial lovin', too.