A twisted, gender-bending thriller for film buffs, Apartment Zero plays like what might have happened if Roman Polanski had been assigned to adapt Kiss of the Spider Woman. Set in a dreamy Buenos Aires where dusk seems to last for hours, this deliberately paced but rewarding psychological exercise has built up a substantial cult following over the years and, while flawed, offers enough unpredictable delights to still grip an audience's imagination. 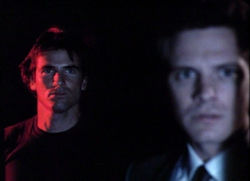 Thanks to the increasingly dwindling audiences at his posh art house movie theater, twitchy and withdrawn cineaste Jack Carney (Colin Firth) decides to rent out the room of his now institutionalized mother - the titular apartment 0 - to a charming stranger, Adrian (Hart Bochner), who becomes a favorite with all of the building's eccentric tenants. Meanwhile a series of gruesome, politically-motivated murders in the city leads Jack to believe that Adrian's suave veneer might be concealing a dangerous beast beneath, and the psychological tension between them begins to mount.

Co-written by the always interesting David Koepp (Stir of Echoes), who later spun off many of the same themes in his memorable Bad Influence, Apartment Zero is an efficient, tightly wound thriller which largely dispenses with showboating theatrics in favor of a chilling slow turn of the screws. 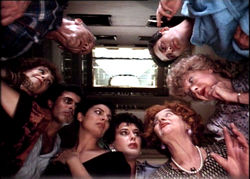 The always excellent Firth carries the burden of the film on his shoulders, and while he subsequently softened his image by appearing as the (often cuckolded) lead in a string of increasingly innocuous romantic farces, here he proves that he can go off his rocker with the best of them. Boiling with a mixture admiration, jealously, lust, and fear, he's the perfect counterpoint to Bochner's Brando-styled ideal, a pearly-toothed, potential wolf in leather clothing. Fans of British sitcoms should also look for The Vicar of Dibley's delightful biddy, Liz Smith (The Cook, the Thief, His Wife & Her Lover), as one comical half of a pair of nosy, elderly sisters. Add to that the perfectly utilized settings and a vertigo-inducing score by Elia Cmiral (Ronin), and you've got one of the more memorable nail-biters of the 1990s. 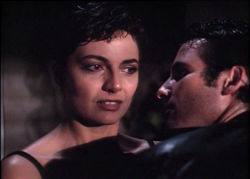 Following its small but profitable theatrical run, the 124-minute film was retooled by director Donovan, who trimmed out seven minutes for all video and television editions. Consisting of mostly Bertolucci-style edits (i.e., dropping entrances and exits from rooms, conversation bridges, etc.), the revised cut has largely been considered an improvement, though hopefully some enterprising licensor will include both versions on DVD one day. In the meantime there's this budget-priced bare bones release, which ports over the Academy video transfer but looks notably sharper than the U.S. laserdisc release. Shot open matte, the film blows up to 1.78:1 framing perfectly well on 16:9 monitors and looks fine at 1.33:1 as well. It isn't razor sharp by any means, but this is a watchable enough alternate and much better than expected from the usually substandard DVD label. The stereo soundtrack is rendered well enough, sounding clear and free of distortion.