A virtually unclassifiable nautical reverie, Amphibian Man (Chelovek-Amfibiya) combines seafaring adventure, romance, monstrous fantasy, water choreography, and tragedy into a strange, beguiling dream of a film. A likely influence on Luc Besson's The Big Blue, with which it shares several nearly identical sequences and a similar story arc, this is a good place to start for newcomers to Russian cinema fantastique. 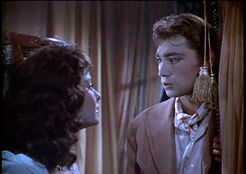 The sailors and fishermen of a remote Spanish town are sent into a panic when divers spot a glittering man, a "sea beast," lurking beneath the depths. However, his nature is more benevolent when expected when he rescues the young Guttiere (Anastasia Vertinskaya), who unfortunately becomes betrothed to the unscrupulous sea captain Don Pedro (Mikhail Kozakov). This amphibious denizen of the deep reveals himself by emerging into the town, where he turns out to be Ichthyander (Vladimir Korenev), the blond son of a local professor (Nikolai Simonov) who saved his ailing son's life by transplanting to him the lungs of a shark. Ichthyander's love for Guttiere forces him to confront some of the less than receptive villagers, who make life difficult indeed for the aquatic outcast. 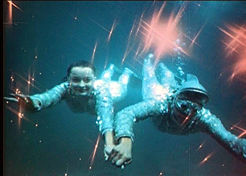 Rarely seen in anything resembling its intended form thanks to dubbed, muddy bootleg video and TV prints, Amphibian Man has largely been consigned to oddball fringe status by American viewers, though apparently its reputation flourished in Europe. The fantasy and science fiction elements are well integrated into the period setting, coupled with a haunting music score and exquisite color photography (MGM could have easily remade this). Of course, an American studio would have most likely nixed the unexpected ending, so it's probably best that this gem remains a quiet little treasure to be discovered by adventurous viewers.

As with its other major restored films, Ruscico's DVD of Amphibian Man is a stunner. The negative has obviously undergone a great deal of loving care, while the beautiful 5.1 remix balances both the music and sound effects between each speaker to a surprisingly robust degree. The English dub track is the same one seen on TV, albeit in much cleaner form here, but the Russian version with English subtitles (or with any other optional subtitle option one might choose) is really the way to go. The disc includes the English language trailer (in much less pristine shape), a "Soundtrack" spotlight, two B&W behind-the-scenes shorts, trailers for other Ruscico titles, artwork and other elements of preliminary design, and a revealing short (11 min.) documentary, "In Search of Ichthyander," which reveals how some of the more astonishing underwater shots were achieved.