Ah, the '70s. In the wake of Vietnam, the news was filled with bizarre atrocities like the mass suicides at Jonestown and bizarre political upheaval in Africa and the Middle East. Among the most notorious "celebrities" from this period was General Idi Amin, who took control of Uganda and embarked on one of the most notorious reigns of terror in history. While the real

man was chronicled with unforgettable irony and horror in Barbet Schroeder's Idi Amin Dada (1974), an exploitative biopic was unleashed in 1980, entitled Amin: The Rise and Fall in the U.S. and The Rise and Fall of Idi Amin overseas.

After a quick thumbnail history lesson about Uganda, we're introduced to our villain (portrayed by lookalike Joseph Olita) as he rises to power following the previous ruler, Milton Obote. Visiting British and Israeli diplomats are openly courted by Amin, who horrifies occasional visitors with the two severed heads he keeps stashed in the refrigerator. Soon he decides to undertake a ritual of "ethnic cleansing" on the Asian population, culminating in the showstopping sequence in which Amin cannibalizes one of the corpses. Using Adolph Hitler as his role model, 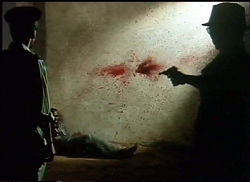 Amin captures and wipes out hordes of rebes (a body count of over 100,000), rapes his enemies' wives, and, with the help of voodoo and a gang of thug compatriots, soon becomes known as "Big Daddy." A large scale attempt to usurp the leader forms the climax after his failed invasion of Tanzania, though as history buffs will know, he continues to live in anonymity to this day in the Middle East.

At first glance, Amin looks like your average made-for-TV biography with a sick twist along the lines of The Guyana Tragedy, but grindhouse fans during its release were shocked by some truly grotesque flourishes that seem to come out of nowhere. The refrigerator scene has already become the sleaze fan's equivalent of Faye Dunaway's wire hanger tirade in Mommie Dearest, and while the real life tragedy involved prevents 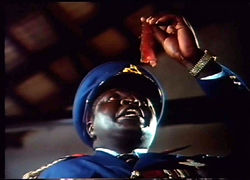 this from descending into pure camp, the sheer outrageousness of the material makes it compelling and, well, just plain weird. Olita's uncanny resemblance to the ousted leader can't quite cover the fact that he's unable to deliver a genuine performance, but with a film this heavy handed and randomly structured, it hardly matters. Several slumming international actors make appearances, including a significant role for the James Bond series' Geoffrey Keen, but the film skims along through the pertinent events so quickly it's hard for anyone to make an impression. The direction by Sharad Patel (who went on to executive produce Bachelor Party!) is competent but rarely distinguished; at least he delivers the action scenes with some panache and never lets the viewer lose interest.

The PAL DVD release from Parc Video (which contains no indication of its country of origin) features the European title on the cover, but the print itself and three trailers (two G-rated, one R-rated) bear the U.S. name instead. The video quality is definitely generations ahead of the scarce bootleg copies and the fleeting U.S. VHS prerecord edition, though anyone expecting a snazzy digital restoration will be disappointed. The image looks soft but passable, and while colors are reasonably accurate, detail tends to smear and bleed, especially in long shots. The open matte framing is occasionally disrupted by the odd hard matted (1.55:1) shot, but compositions overall are fine. Be sure to watch the R-rated trailer, which offers a gruesome recap of the film's many "highlights."