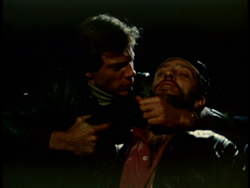 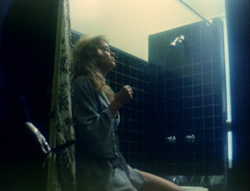 A real oddity from the tax shelter heyday of Canadian exploitation, American Nightmare is sort of a tabloid urban slasher prevalent in the early '80s, mixing knife-wielding mayhem with crime procedural in a manner explored by other better-known films like Fear City and 10 to Midnight (or, at the super nasty end of the scale, New York Ripper). Despite the title, all the nastiness takes place on the mean streets of Toronto, which has prompted more than a few genre fans to pinpoint this as the closest thing to a Canadian giallo. Things certainly start off on an attention-getting note as a young prostitute, Isabelle (Paul, future star of Christine and Baywatch in her debut role, a favorite of celebrity skin fans), is murdered by her anonymous client. The estranged daughter of a media baron, she'd turned to stripping at Club 2000 alongside her roommate, Louise (Staley), who might know something about the maniac who might have a few more dancers and hookers on his hit list. Enter Isabelle's brother, Eric (Day), who's come to help after getting a disturbing letter and gets a tip from Isabelle's cross-dressing neighbor (Aubrey). Eventually he teams up with Louise to unravel the mystery while the slaughter continues for reasons a little more complex than he might have imagined.

Crammed with more than enough blood and nudity to satisfy drive-in fans, American Nightmare boasts a 1981 copyright date but took over a year to get a release. The generic title probably didn't help, and you'd think the crew involved (including producers like Prom Night's Paul Lynch and even Ray Sager, The Wizard of Gore himself) would've come up with something a little catchier. There's certainly enough here to keep exploitation fans diverted, and for good measure Don McBrearty (who normally helmed artier TV fare) gives it all a grim social undercurrent courtesy of a corrupt international charity and a chilly, almost Cronenbergian attitude to the human body and sexuality.

On top of that you get an icy score by Paul Zaza, who also worked on Porky's and Curtains around th 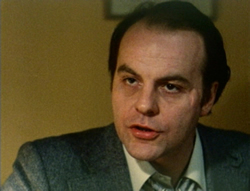 e same time, a welcome appearance by the great Michael Ironside (Scanners) as a cop on the case, and a great supporting turn by slasher staple Lenore Zann (Happy Birthday to Me) as a dancer trying to get 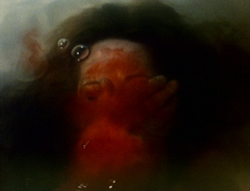 out of the biz, and you've got a strange, very early '80s bit of nastiness. The murder scenes are also executed with a nice amount of zest including a grisly straight razor bathtub scene that takes the one from Blood and Black Lace a couple of steps further. It's certainly not perfect (mainly thanks to Day, who seems to be channeling a little too much of Stephen Lack's performance from Scanners), but it's still an atmospheric curio from a video age unlike any other.

Most American audiences first saw this film via Media's VHS release which haunted video shelves for many, many years. However, the film remained MIA in the digital age for many years like more than a few of its '80s Canadian brethren. The Scorpion release is taken from a full frame (open matte, judging by the looks of it) video master and looks fine for the most part, at least a couple of steps above the old VHS version. It's nothing to scream about, but it gets the job done and makes for a decent introduction considering how many people have probably never had a chance to see this. You can zoom it in to 1.78:1 on a widescreen TV if you feel so inclined, but at full height it plays well enough. As usual this is presented as an installment in the Katarina's Nightmare Theater series, with the horror hostess kicking off with a funny burlesque tribute to the film's club setting and then rattling off a variety of facts about the cast and crew. Previously heard on the Scorpion release of Humongous, Lynch returns here for both an audio commentary and a "Kat's Eyes" video interview, both with Waters (and Scorpion's Walt Olsen sitting in the background for the commentary). Writer John Sheppard also appears for a second commentary, and the three extras together paint a thorough picture of both the making of this film and the state of Canadian tax shelter filmmaking at the time. Topics covered include the fast writing and shooting schedules, the decision to lens this in 16mm and gear it for the burgeoning home video market, the reason Lynch couldn't direct the film, the contributions of Zaza, and the circumstances under which Alexandra Paul appeared in the film (because agencies weren't thrilled with having Canadian actresses combine nudity with the graphic dialogue). The Lynch featurette doesn't have much to do with the movie itself, instead covering his work on such films as Prom Night (which gets treated in a fair amount of detail), Humongous (including a repeat of the tale about shooting the drunken fire climax), and Blood & Guts with William Smith, which he compares to The Wrestler. You don't get a trailer for this particular film (it's doubtful one ever existed), but you do get bonus ones like Double Exposure, The Pyx, Death Ship, and of course, Humongous.