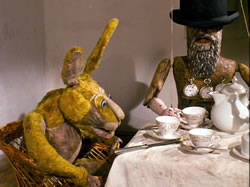 By default, any adaptation of Lewis Carroll's influential novel Alice's Adventures in Wonderland (and/or its sequel) is going to be weird. Therefore, it's really saying something that Jan Svankmajer's stop-motion Czech version, Alice, is one of the weirdest of the bunch-- and that's a good thing. One of Europe's most respected and idiosyncratic animators, Svankmajer had been making shorts since the '60s but decided to branch out with this fairly faithful, feature-length version of the popular fantasy, with only one live-action performer (Kohoutová) playing Alice and speaking the characters' dialogue directly to the camera in close-up. Everything else is conveyed through bizarre, sometimes macabre creations using fur, bones, clothing, and lots of eerie-looking fake eyeballs. It's safe to say there's never been anything else like it -- except for later Svankmajer films, of course. 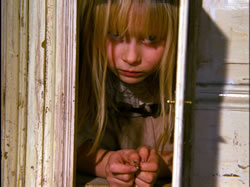 Most people already know the narrative basics here, but for the record, Alice is lingering by a country lake when she sees a sawdust-filled white rabbit which breaks out of a preservation glass cage and leads her into a subterranean passageway (here a slow elevator) that takes her to a land filled with peculiar creatures and mysterious potions that can alter her size.

The rest of the film is pretty much indescribable as Alice is pelted, chased, and simply baffled by a menagerie of makeshift critters, each one more creative and surprising than the last. Ostensibly a children's story, this is fairly disturbing material at times (especially the Dormouse's shenanigans) but probably a good fit for anyone used to the quirky output of somewhat more accessible works by David Lynch and Tim Burton. The infrequent dialogue consists of quotations from the book spoken by the characters, leaving much of the film an unsettling sonic tapestry of clicks, creaks, and squeaks; you won't hear anyone singing "A Very Merry Unbirthday" here. 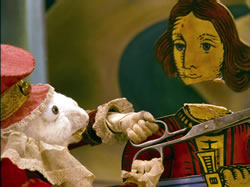 Even the film's staunchest admirers have had a very rough time actually watching it outside from rare theatrical screenings, as its English-friendly releases in Great Britain and America have been a very disappointing batch indeed. A dull, fuzzy-looking master from the late '80s has been the frequent source for most DVD releases, but most damaging is the fact that only the wildly out-of-synch English dub has been used for almost all of its home video releases around the world. In every possible respect, the BFI's region-free dual-format release (Blu-Ray and DVD) is a major cause for celebration as it features not only a stellar, dramatically improved transfer but the original Czech soundtrack with optional English subtitles as well. (Mainly for nostalgia purposes, the English dub is carried over here as well but isn't recommended to anyone but the most severe subtitle-phobes.) Detail here simply blows away previous versions so thoroughly it feels like a wholly new film; the textures in every frame are considerably more defined and subtle, while the entire film has a deeper, richer look that makes the whole experience far more potent and enjoyable. Very highly recommended without any hesitation.

The feature itself would be more than enough reason to endorse this release, but you also get a handful of deeply quirky extras as well. First up is a silent, 1903 version of the story which condenses its highlights into 10 minutes; also transferred in HD, it's definitely the worse for wear here (lots of water damage, scuffs, etc.), but it's a miracle this survives at all. Though stagey, this piece is also a bit nightmarish as its human actors in animal costumes look like something out of the climax from The Shining. 1974's "Alice in Label Land" is an animated, 12-minute educational short about the importance of proper food labeling, but's all structured around Lewis Carroll's story with Alice hurtling through a supermarket where the novel's characters all relate to various issues of food presentation. The groovy credits and funky soundtrack add to the novelty of this pop culture curio, which is going to catch a lot of people off guard. It's also very useful as a historic document showing the laws going into effect circa 1973 about the safety measures and instructions involved in food packaging. Finally you get two music videos by The Brothers Quay from the early '90s, "Stille Nacht II: Are We Still Married?" and "Stille Nacht IV: Can't Go Wrong Without You," both B&W gothic miniatures which use Alice-inspired stop motion imagery (albeit more sensually than Svankmajer) for the group His Name Is Alive. The illustrated booklet features liner notes about the director's path to features by Clare Kitson, a 1987 interview with Svankmajer about his intentions for the film, a review by Philip Strick, a text bio, and notes about each of the extra features. The DVD also includes a (non-HD, obviously) bonus 1921 short, "Elsie and the Brown Bunny," in which a brown bunny leads a girl on a fantastical tour of... Cadbury candy!