This low budget homage to Italian 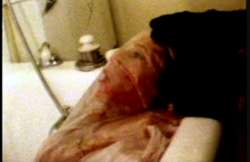 thrillers from indie director Joseph Parda managed to earn a modest fan following thanks to its widespread availability on home video in the waning days of the VHS format. Seen today, it's still a rather charming reminder of the days when homemade horror could find a welcome home in mainstream entertainment, even if it's shot on what looks like scrappy Super8 and loaded with post-synch dialogue that makes the English dub of Strip Nude for Your Killer sound elegant in comparison. Fortunately Parda compensates for these shortcomings with some stylish visual flourishes and plenty of sex and violence, albeit in a format that more resembles a hyper-stylized Andy Milligan project than a Mario Bava film. After a grisly opening sequence in which a woman is slashed to death in the shower and wrapped up in the plastic 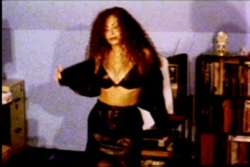 shower curtain, the story's focus centers on the gruesome paintings of controversial artist Richard Streeb (Damevsky), who soon winds up dead under, uh, mysterious circumstances-- with his body even more mysteriously missing. His brother, Bill (Zaso), decides to investigate and uncovers a host of suspects including Gloria (Haverty), wife of the deceased. When not busy bumping loins, he encounters a continuing series of brutal killings all tied to his brother's shady lifestyle, all of which comes into play for a nasty finale.

Considering its modest origins and the 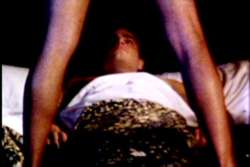 compromises which come along with it, 5 Dead on the Crimson Canvas has fared a bit better than most of its contemporaries thanks to video availability and solid fan press over the years. The decision to loop the entire film afterwards with canned voices is its main shortcoming, perhaps intended as a nod to the often flawed dubbing of gialli but a huge distraction when so much of the film's plot is conveyed with characters lounging around rooms talking. On the other hand, the gritty visual texture and deliberately lurid color schemes are surprisingly effective, wringin atmosphere out of the meager resources. Regular genre actor Zaso offers a decent lead performance, while the rest of the actors are more variable. Plenty of in-jokes for horror buffs abound as well, making this a bit more clever than your average direct-to-video fare.

Shot on Super 8, the film is presented in an understandably scrappy but watchable transfer that captures the format's ragged charm. The mono track isn't much to talk about in the first place, but it's rendered here well enough. The compositions are matted to 1.66:1 and don't seem to suffer much in the process. The biggest of the extras is a commentary track with Parda and Zaso,p who go through the film's origins and production process in detail while pointing out quirky tidbits about the actors and crew. Other supplements include a reel of audition footage (featuring the actors' natural voices), a still gallery, a trailer, and liner notes by Paul J. Brown.

is this challenging and often strikingly stylish cult item, a genre-bending trip reminiscent of those unclassifiable '70s oddities that straddle the line between art and sleaze. The poetic opening introduces our protagonist, Jean-Charles (Flesh for the Beast's Runco), wandering along a beach wearing a gas mask. After being hit by a car driven by pretty Erika (Krause), he finds himself at her remote home where her dysfunctional family -- namely the wheelchair-bound Alexander (Johnson) and his pathological wife,

Cynthia (Daly) -- seem embroiled in some very odd mind games. The newcomer stirs things up even further, culminating in a bizarre, trippy climax that carries the story onto another plane entirely.

A solid stab at deeper artistic expression than the usual straight-to-video fare, Machines of Love and Hate benefits from a surprisingly strong cast (even the wildly erratic Daly is fine here), an eerie mood, and a number of haunting visuals that rise far above the modest budget (which still looks much, much higher than Canvas). The occasional poetic flourishes meld nicely with the occasional dash of sex or

gore, balancing throughout while ladling out enough surprises to string the viewer along. The remote, chilly story evokes memories of similar experimental/narrative films like Louis Malle's Black Moon (with which this wound make a fine double feature), while Parda's continued growth as a director indicates even stronger things to come.

Given the fairly recent vintage of the film, it's not surprising that Cinema Images' DVD looks quite satisfying (even if the video-edited origins most likely prevented an anamoprhic transfer). Colors are rich and satisfying throughout, and the crucial black levels appear accurate. The evocative music score sounds just fine, too. The biggest extra is Parda's 25-minute short film, "Szamoto's Mistress," with Kraus and Joe Zaso acting out "Stefan Grabinski's erotic masterpiece" about a sexual relationship that turns increasingly strange after a memorable night in bed. Softcore vet Kraus isn't exactly shy, either. Other extras include bonus Cinema Image trailers, a still gallery, and talent bios.