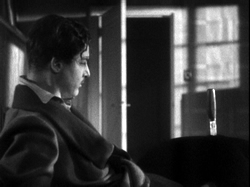 While in England, Canadian visitor Richard Hannay (Goodbye Mr. Chips' Donat) decides to spend an evening at a music hall and, after a sudden melee involving gunshots, winds up escorting a frantic, mysterious woman (Mannheim) back to his flat. She tells him that she is a spy being pursued by an organization called the 39 Steps, led by a man missing a finger from one of his hands. Later that night, she turns up in his bedroom with a knife in her back-- and Hannay goes on the run to avoid arrest for her murder. Thanks to a number of tense and sometimes amusing complications, he winds up manacled to a beautiful, icy blonde (Carroll) and runs through the Scottish countryside as he attempts to find the villains and clear his own name. 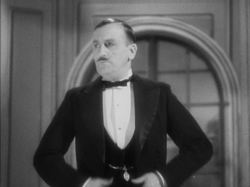 The richest film from Hitchcock’s British filmmaking period, The 39 Steps loosely adapts John Buchan’s classic novel into a prototypical “wrong man” scenario with an innocent hero chased across the English countryside by police and villains alike. Though sometimes neglected (especially by film schools) in favour of Hitch’s productive Hollywood period, The 39 Steps represents the first mature version of “the Hitchcock formula” at work and, along with North by Northwest, remains one of his best mainstream thrillers.

An excellent example of how to pace a film, The 39 Steps contains no dull moments along the way and packs a number of surprises into its brief running time. While some Hitch fans prefer The Lady Vanishes from the director’s British output, this film offers more substance and technical innovation (such as the now legendary shock cut from a screaming landlady to a rushing train). Hitchcock may not have had much regard for his actors (“cattle”), but Donat and Carroll make one of the most fetching couples in film history and give the 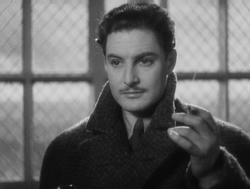 film much of its necessary weight. Their witty, banter-filled dialogue perfectly mirrors their flight across the countryside, making this one of the earliest and best “road” movies.

Anyone unfortunate enough to sit through generations of awful, dupey versions of this film was in for a very pleasant shock when Criterion first released this film to DVD. To say that this is like watching an entirely new film is an understatement; every existing video edition before it had been blurry, flat, and plagued by audio submerged in hissing and crackling. Countless levels of clothing detail, facial nuances, and landscape features became plainly visible, as if a thick fog has suddenly been swept away from the camera. The sound unfolded with am 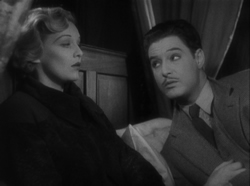 azing clarity, and the quiet portions are actually quiet. A few of the exterior shots during the Scotland section look a bit rough around the edges, apparently a flaw in the original source materials that could not be avoided. The plentiful extras included the 1937 Lux Radio Theatre broadcast (with Robert Montgomery and Ida Lupino), which owes far more to Hitchcock’s film than the Buchan novel, and a 1970s educational film produced by Janus, “The Art of Film: Vintage Hitchcock,” a study of his British suspense period. A good introduction for the uninitiated, the half-hour film contains nothing groundbreaking but gives a nice thumbnail sketch of his filmmaking techniques, with Young and Innocent receiving most of the screen time. For some reason the films are also covered out of sequence, with The 39 Steps appearing last. The only disappointment is academian Marian Keane’s audio commentary, which comes off as a recited lecture recapping the onscreen action with some not terribly gripping observations about Hitchcock’s visual placement of characters and dropping of clues. A host of public domain companies also attempted to cash in with substandard transfers, but for the budget conscious, the better options out there for a while were the US Delta disc (which appears to be taken from the master used for Criterion’s laserdisc and includes a very odd Tony Curtis intro) and the UK Carlton disc, packaged in a set with the original The Man Who Knew Too Much.

Criterion's Blu-Ray (timed with a DVD reissue as well) carries over the Keane commentary and the Lux Radio performance but replaces the “Art of Film” from their earlier release with a modified “Hitchcock: The Early Years” HD doc, essentially the same territory but with improved film clips and a more modern approach. Also included are footage from a Hitchcock UK TV interview in 1966 with broadcaster Mike Scott, a visual essay on the film’s motifs and visual schemes by Hitchcock expert Leonard Leff, relevant extracts from the famous Hitchcock/Truffaut interview sessions, production design drawings, and liner notes by critic David Cairns, who talks about the genesis of Hitchcock’s famous MacGuffin and the major changes (usually for the better) made to the source novel. Oddly, the transfer taken from ITV's restoration (previously available on Blu-Ray with a more puny bit rate as a Region B release in the UK) doesn't blow away the original Criterion DVD, which was already fine to begin with; under the scrutiny of 1080p it's certainly more cinematic, but if you’re expecting a sparkling feast of B&W clarity like The Treasure of the Sierra Madre, well, this just isn't that kind of title. This is easily the best the film has ever looked (pretty much on par with their HD presentation of The Lady Vanishes), and as an example of Hitchcock's spectacular British thriller period, it really can't be topped.